Howard the Duck – As Entertaining As Ever Thirty Years Later

August 1, 2016 Howard the Duck – As Entertaining As Ever Thirty Years Later

It is easy to forget that the 1986 film, Howard the Duck, is based off a Marvel Comic character, especially living in an era where Marvel Comics seems to own the cinematic universe. But, it was the first Marvel Comic to be adapted into a film, and though Comic Book films are an entirely different entity today with the vast improvements in technology, the elements that plagued bringing Howard to life are part of the reason the film has generated a cult following. Yes, Howard is a little creepy, maybe a lot creepy. His mouth does not move, he is drunk, and a bit of a pervert. That in mind, considering for the most part Marvel Comics has since been geared toward younger audiences, Howard the Duck serves up more adult humor. Howard is a campy character and it is the humor and audacity of the film along with a pretty fun ’80s Synth-Pop theme song sung by a very sexy Lea Thompson (Back to the Future 1985, Some Kind of Wonderful 1987)  that still resonates with audiences thirty years later. 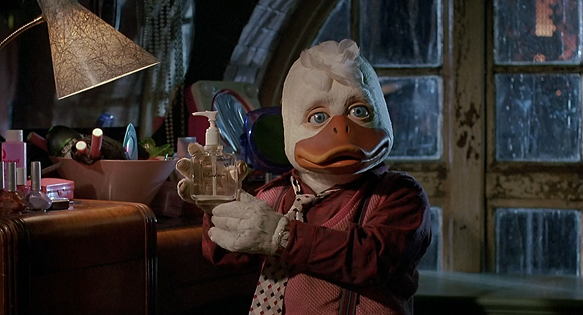 Released on August 1st back in 1986, Howard the Duck has been called one of the worst films of all time, and when it crashed into movie screens, it did anything but wow audiences and critics. Written by Gloria Katz and Willard Huyck, both of whom worked together on 1973’s American Graffiti as well as 1984’s Indiana Jones and the Temple of Doom, initially imagined Howard the Duck as an animated feature. Although, it was marred with production issues, like exploding animatronic ducks, and received mixed responses in test screenings. Even having George Lucas as executive producer coming off the massive success of Star Wars could not save the film from being a massive flop. In fact, a contractual obligation required Lucas to provide a live-action film, which spurred the decision to use live-action actors, like Ed Gale (O Brother, Where Art Thou? 2000, The Polar Express 2004) to play Howard, and special effects rather than animation.

Upon its release, the film was a major critical and commercial failure, grossing approximately $38 million, just $1 million more than its budget.  Yet, despite its negative outcome, the film did have one very positive by-product. The story goes that Lucas was in debt, having spent an estimated $50 million to build his Skywalker Ranch production facility and had hoped Howard the Duck would get him out of that debt. Since the movie was not able to do that, he had to sell off some of his assets. One of those assets was his newly launched computer animation studio, which he sold to Steve Jobs, and that eventually became Pixar Studios.

Aside from audiences finding issues with the production value and special effects, the film’s writing was also problematic. Audience’s meet Howard in Duckworld, a planet similar to Earth, but inhabited by ducks and orbited by twin moons. After returning home from a day of work and settling into his armchair to read an issue of Playduck magazine, Howard gets catapulted into outer space and lands on Earth. Then, one event after another takes Howard from eyeliner wearing thugs to a music club, being chased by a homeless woman and also a female biker gang. None of it makes any sense. Why is Howard so calm when he lands on Earth? Why does he go to an employment office? How does he get a job? How does he have so much game with Lea Thompson’s character Beverly? 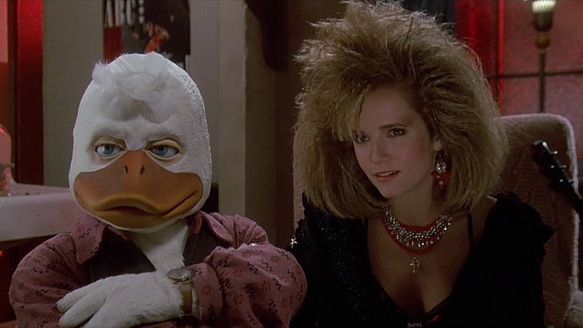 It is later revealed that a dimensional-jumping device was aimed at Howard’s planet and caused his trip to Earth. But, a malfunction causes something else to be transported, which possesses Dr. Walter Jenning (Jeffrey Jones: Ferris Bueller’s Day Off 1986, Sleepy Hollow 1999). Howard must then save Beverly from the creature, which calls himself “Dark Overlord.” Howard, with the help from goofy Lab Assistant Phil Blumburtt (Tim Robbins: Jacob’s Ladder 1990, The Shawshank Redemption 1994), succeeds in saving Beverly but ultimately destroys his chances of returning to his planet, so he becomes Beverly’s manager and plays guitar with her on stage.

Let us face it, when movie lovers look back on ’80s films, there is a bit of leniency when it comes to the absurdity of certain movies because there is an acceptance of the tacky, ridiculous, but in the end, a fully entertaining aspect that goes along with films such as Howard the Duck. Any person that saw Howard the Duck as a child probably remembers the movie as a favorite growing up, even with the ultimate knowledge that it is really pretty bad. Yet, the film is still fun to watch, even today after all the bells and whistles everyone is used to, possibly because it is still funny to see a person in a duck suit looking at duck boobs. 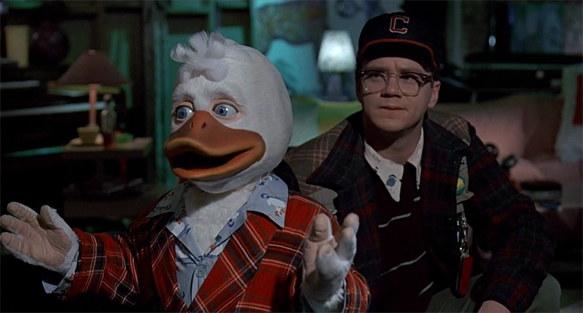 In addition, Howard the Duck combined many of the elements that make an ’80s film so enduring; a good sense of humor, entertaining story, and a killer original soundtrack worked on by John Barry and Thomas Dolby. Interestingly enough, Beverly’s band in the film, Cherry Bomb, has become a popular  name for real life bands in the future. Also the title of The Runaways’ hit song, back in 2008, the Los Angeles, CA band Cherri Bomb was born, but they later changed their name to Hey Violet. Whether there is the slightest bit of correlation to Howard the Duck’s Cherry Bomb or not, one can not help thinking of the catchy track “Hunger City” when hearing the name.

Still making its way into popular culture, Howard the Duck even made its way into the MCU most recently as a post-credit bonus in  2014’s Guardians of the Galaxy, sparking speculation that we might see Howard re-imagined in a new Marvel film. Whether that happens or not, the public’s excitement at seeing Howard pop up on screen is proof he has not been forgotten and is still the beloved Duckie. 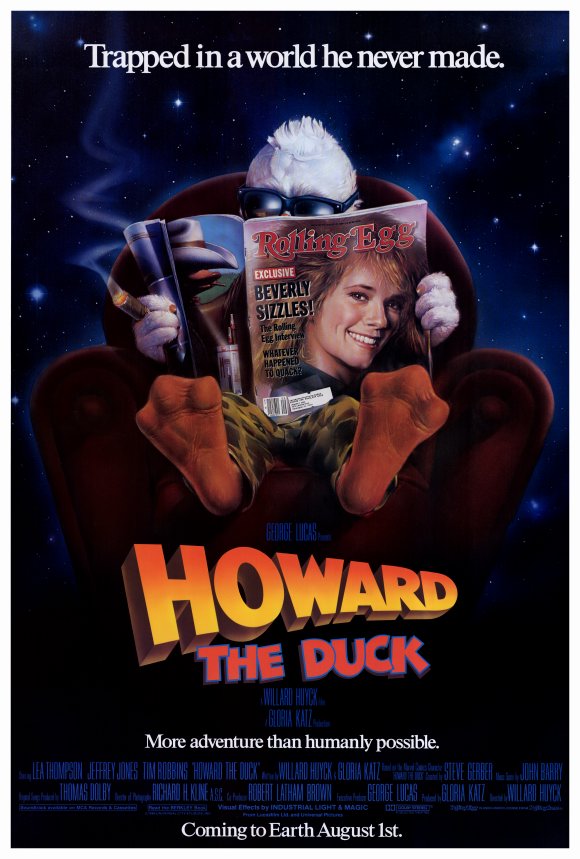 Purchase Howard the Duck on DVD on Amazon