Sasquatch, Yeti, Bigfoot, Windigo, Timber Giants. No matter the moniker, just the word summons to mind a gigantic, sadistically cruel and hairy beast who stalks the forests of North America in stealthy secret. In Hunting Grounds, which comes on VOD February 7, 2017 via Uncork’d Entertainment, for the first time ever, Sasquatch dons a lovely Kim Kardashian-esque derriere.

Originally entitled Valley of the Sasquatch and clocking in at roughly 90 minutes, Hunting Grounds is directed and written by John Portanova (writer: The Device 2014, Trauma 2013), and has already won several awards, including Best Sci-Fi/Horror Film at the Toronto Independent Film Festival in 2015; Best Actor and Best Cinematography – Feature at the Crimson Screen Horror Film Fest 2015. 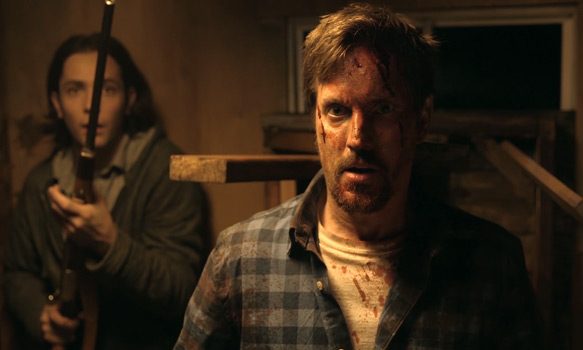 The film is fairly simple: having reached the absolute bottom of the abyss, father Roger Crew (Jason Vail : Tammy 2014, Paranormal Activity 2012) and son Michael (Miles Joris-Peyrafitte: Gut 2012, Counting to Infinity 2009) are headed to Roslyn, Washington to purchase some last minute supplies before moving to that trite cabin in the woods. We learn that recently Roger has lost his job due to overconsumption, clearly due to the hit-and-run death of his wife of twenty years.

The duo arrive to discover that there are no lush accommodations in this forest abode: the cabin door is broken and has no lock, the inside is ransacked; furniture tossed, pillows shredded, art askew, and muddy handprints beside the front door. Visually, the cabin is a clear metaphor for their lives: a complete and utter disasterpiece. The tension is palpable and the father and son start their new life off arguing.

Enter dad’s best friend, the alcoholic Sergio Guerrero (David Saucedo: Paranormal Activity: The Marked Ones 2014, Slink 2013) and his brother-in-law Will Marx (D’Angelo Midili: The Invoking 2013, Blank 2009). Sergio is a brash-talking, beer-swilling logger who has come along to cheer up his bestie with some rifles and blood sport. Strangely, neither Will nor Michael hold any special affinity for the knife-wielding sociopath.

After a night of revelations and drinking, the foursome set out into the woods for a day of hunting. As the quartet stop for a rest in the woods, they spy a gorgeous young buck. Sergio prods Michael to take up his father’s rifle, and when the younger man resists, he is rewarded with the title of “pussy.” Clearly real men hunt! After a failed shot from a cornered Michael, the buck takes off and the hunter takes chase after the injured animal. To set his son’s mind at ease, Daddy Dearest offers the following tidbit: “You know, Michael, something’s going to kill it eventually.” Michael’s response, cliché as it might be, echoes the sentiments of many: “Yeah, but it doesn’t have to be me.” 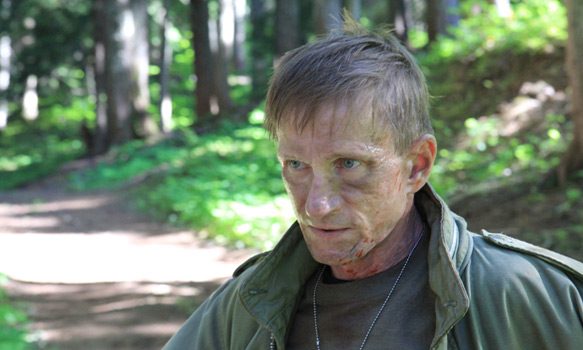 Somewhat predictably, Guerrero stumbles upon a gruesome scene and begins a slow descent into anxiety and fear. When a very jumpy man goes off into the woods with his rifle to attend to nature, he ends up shooting at shadows and Sasquatches. In the most powerful line of the entire film, Sergio states rather emphatically,”Just because you haven’t seen something, it doesn’t mean it doesn’t exist.” Indeed.

As the group camp down for the night, Will taunts the panicked Guerrero with the legend of Ape Canyon: a rather silly tale that revolves around a group of miners who are attacked by a group of apemen, giving the canyon its name. For all you trivia buffs, there is, in fact, an Ape Canyon in Washington State. What ensues is sheer monkey business. The film is fairly cut and dry, and there is very little wiggle room for interpretation. However, each on-screen death is positively hysterical: think exploding watermelons.

Set in the gorgeously lush Cascade Mountain wilderness, the film was shot on location in Easton and Roslyn, Washington. If Bigfoot exists, it would be easy to picture him (or her) at home in this heavily-wooded, beautifully foreboding terrain. Anyone who loves nature will appreciate the charm of the scenery throughout Huntings Grounds. Unfortunately, the film is not without its flaws and a strong will to suspend any disbelief at the opening credits is required.

Several scenes are marred by a stilted exchange of dialogue that feels forced rather than organic, while the late-entry character Bauman seems to exist merely to provide a slot for Emmy-winner Bill Oberst Jr. (TV: Scream Queens 2016, Criminal Minds 2014) in the cast. Let’s not even get into the design of the actual creatures, which look like the offspring of King Kong, Grape Ape, Maurice Sendak’s Wild Things, and Gremlin‘s Gizmo, with the aforementioned Kardashian rump. 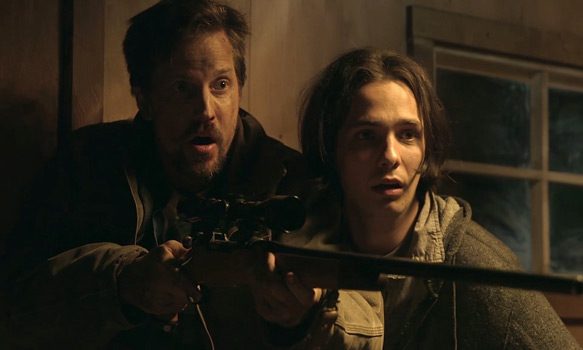 The positive aspects of the film weigh heavily in its main message. Clearly hunting is a hot-button issue for many: some consider it a sport to track an animal and end its existence, while many others consider it murder. The true value of Hunting Grounds is its commentary on the issue, and what hunting says about you and your character. Whether the audience relates to Sergio and Roger, who explicitly state that hunting is a “sport,” or Will and Sergio, who keep their hands gun-free, is telling about individuals personal stance on this hot topic. Also, there is something to be said for choosing friends wisely!

What Hunting Grounds lacks in horror or roller coaster thrill-rides, it makes up for with its messages: beware who you befriend and, most importantly, respect nature. For the beautiful scenery, wonderfully powerful messages, and possessing the chutzpah to go against murder for sport, CrypticRock gives Hunting Grounds a 3 out of 5 stars. 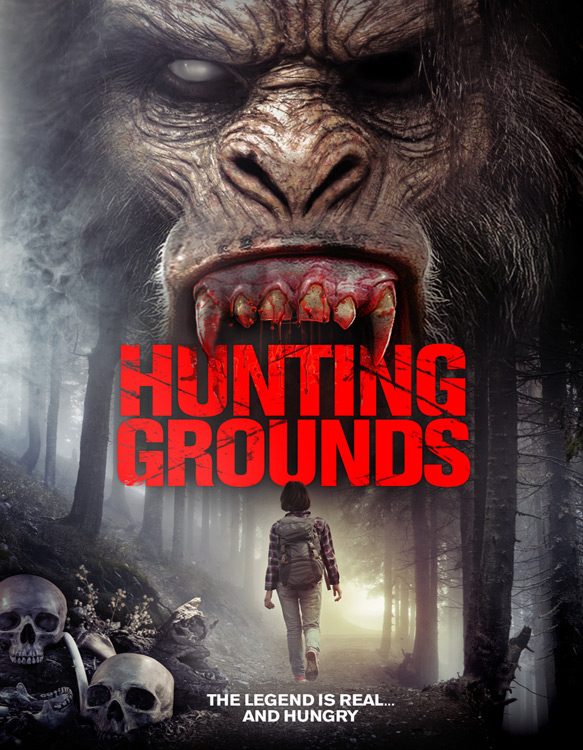