In Fear, a 2013 Indie Thriller from the UK, was met with high praise by critics upon its initial release, so much so that at one time it had a near unheard of 100% rating at review aggregator Rotten Tomatoes. Once it became available in the United States, however, ratings took a bit of a dive, although it currently ranks at a still impressive 86% on Rotten Tomatoes and 66% on the more discerning Metacritic. With so many positive reviews, one expects In Fear to be something really special, but while it is a solid film, it does not entirely live up to expectations. Perhaps the film plays on fears that are distinctly British. Perhaps too many people read those initial reviews before watching and set their expectations a bit too high. After all, In Fear had a modest budget and was shot in a mere four weeks. It was also the first feature length film for director Jeremy Lovering whose experience prior to In Fear was in television. Taking into account budget and time constraints, and the relative inexperience of the cast and crew, In Fear might just be deserving of the praise it has received. 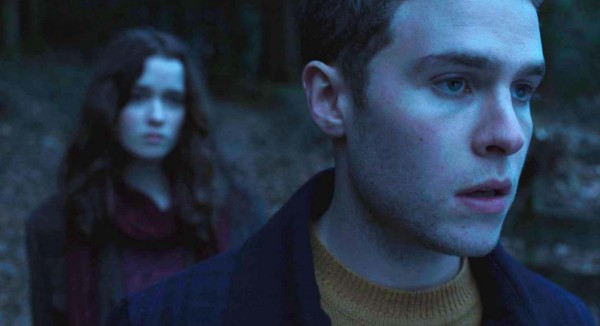 The plot is quite simple. A couple who have been dating for just a few weeks decide to take a road trip to attend a music festival. Tom (Iain De Caestecker) decides to take a brief detour so that he and Lucy (Alice Englert, who was only seventeen at the time of filming) can spend a romantic night at a cozy countryside inn before diving into the chaos of the festival. The couple get lost, encountering the same signs and landmarks no matter how many different paths they take. Soon the sun sets, and Lucy begins to catch glimpses of shadowy figures in the distance. Tom, of course, thinks it is just her imagination.

Anyone who has been lost knows how quickly what at first seems like an impromptu adventure turns into a miserable experience fraught with frustration that will eventually turn into panic. Tom and Lucy, understandably, let the negative feelings get the best of them, and they take it out on each other. Also, due to an off-screen conflict that had taken place at a pub just before they set out, they are not quite as polite with one another as brand new couples would be. As it turns out, much of the tension in the film is real. In making the film, Lovering employed that old trick wherein he gave his actors a basic outline of the plot, but did not fill in the details. The dialogue was mostly improvised and, as Lovering has stated in various interviews, some of the more frightening scenes were quite traumatic for Englert and De Caestecker. 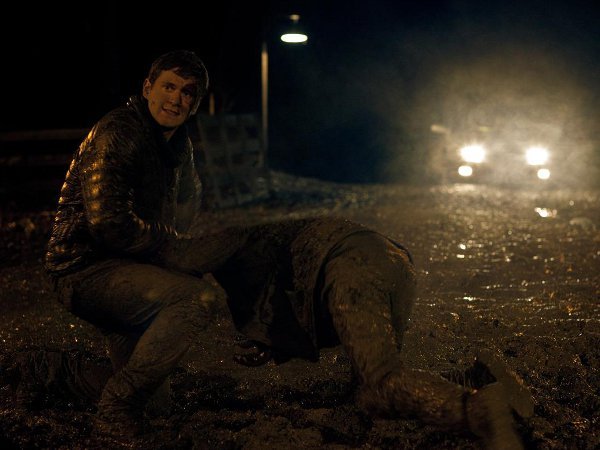 The first half of the film involves the couple driving through the maze of remote country roads and becoming increasingly agitated. Fans of a certain video game might expect a “Skull Kid” to appear at any moment with his flute. It soon becomes clear, however, that a real threat exists on those roads, and, while that threat appears to wear a mask at times, it is far more dangerous than any mischievous forest sprite could ever be. Those scenes where the couple is tormented in ways that are both subtle and maddening are the strongest in the film. Like Tom, the viewer sometimes wonders if Lucy is just jumping at shadows, or maybe it is Tom himself who is playing some twisted game. It is only fair to consider Lucy, too. The seeming impossibility of the maze hints that there might be a supernatural entity manipulating events. The ambiguity certainly keeps the viewer wondering just what it going on, and it is the unknown which keeps the audience itself in fear.

There is a change in tone in the second half of the film when the couple encounter an injured hitchhiker, Max (Allen Leech), claiming that he is also a victim of the mysterious villain lurking on the roads. Given the circumstances, the couple is suspicious, but Max ends up joining them anyway.  Leech is quite adept at playing the part of the “is he or isn’t he” suspicious character. His personality shifts frequently, fluidly alternating from menacing to endearing to vulnerable and back again. Once Max appears, however, the narrative becomes somewhat familiar, although there are still some surprises remaining. A particular strength of In Fear is that the tension is consistent throughout, and even when some mysteries are explained, enough questions remain to keep the viewer engaged in speculation. 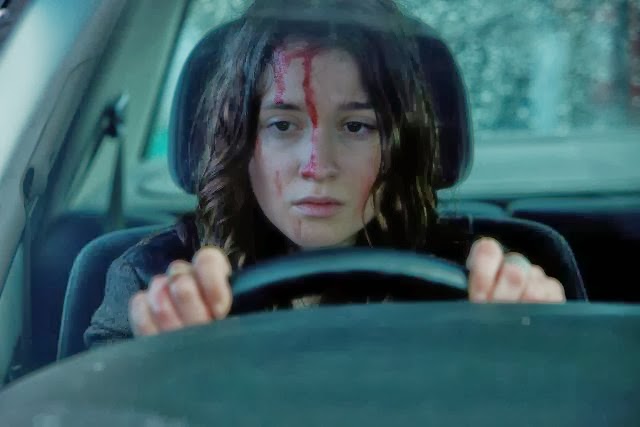 One issue with In Fear is that it is dark — literally — and it is sometimes difficult to see what is going on. Of course the darkness makes those vague shadows all the more threatening, but there are other moments where those with less than perfect eyesight or a persistent glare on the TV screen might miss something important. It is also somewhat disappointing that this remote English countryside, both beautiful and threatening, is obscured for most of the movie. A fog-laden dusk would be just as frightening and disorienting as complete darkness. However, it is quite possible that the darkness is meant to evoke a claustrophobic feeling in the viewer, and if that is the case, it works. The characters are in the dark both figuratively and literally, and so is the viewer, so while the visual limitations can be frustrating, the darkness increases the audience’s ability to empathize with the protagonists.

Overall, In Fear is an effective film. It has a compelling plot, it is well-acted, and it consistently creates suspense. It has its flaws, but at a modest eighty five minutes, those flaws really do not amount to much. It is definitely worth a watch, especially for those who enjoy thrillers and a minimalist approach. Now that Lovering has a feature film under his belt, it will be interesting to see what he comes up with next. CrypticRock gives In Fear 3.5 out of 5 stars. 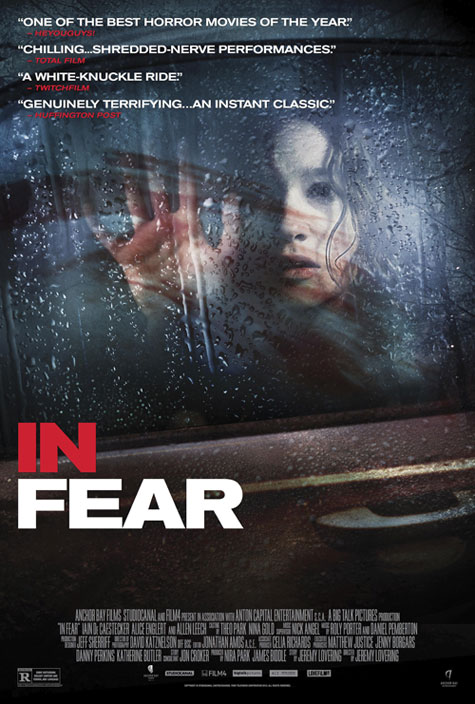