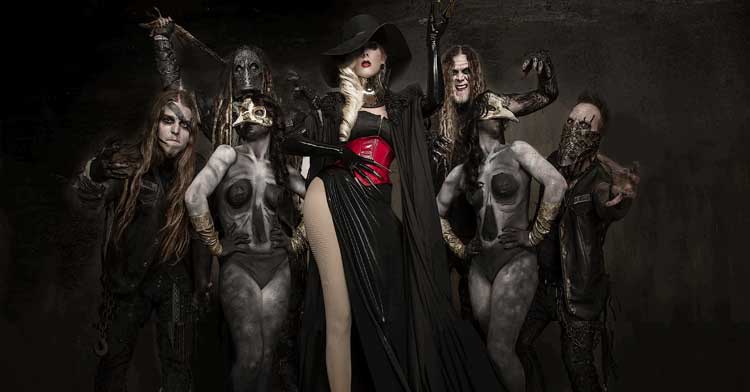 Los Angeles, CA based band In This Moment have traveled a long and interesting road since their formation back in 2005.  Debuting with Beautiful Tragedy in 2007, the band received success from the get go with charted positions.  Over the years, supporting a list of bands on tour, they continued their climb with 2008’s The Dream and 2010’s A Star-Crossed Wasteland.  Seeming as if they would continue the same trend, the untimely departures of guitarist Blake Bunzel, bassist Kyle Konkiel, and drummer Jeff Fabb left In This Moment with only founding vocalist Maria Brink and guitarist Chris Howorth.  Faced with the harsh reality that this could be the very end of the band, the two members reassembled a new cast featuring guitarist Randy Weitzel, bassist Travis Johnson, and drummer Tom Hane.  Having nothing left to lose, they took a leap into the unknown and released their new album Blood in 2012, and came up with their most successful album to date, launching them into another stratosphere.  After two steady years of headlining tours for Blood, In This Moment find themselves ready to prove their rise was more than just a fluke with fifth studio album Black Widow.  Now on Atlantic Records, after eight years with Century Media, the band called on producer Kevin Churko for the third straight album.

Introducing Black Widow is a short dramatic piece, “The Infection.” With whispered words, strange noises, and eerie vibes it’s fantastical and fear-inducing as if from a ’50s Horror movie.  This introduction sets up the style of the album as a whole, adopting a strong theme for this offering. “Sex Metal Barbie” is a satirical commentary on how the music media have reacted to Brink in the past.  Addressing the way she is labelled and dismissed for breaking out of the norms, it is a full on counter attack at her portrayal in the media. With its mix of sexy vocals and blistering guitars, combined with screams and electronic wizardry, this is a catchy song and a great rebuttal of her critics.  This is followed by an equally engaging song titled “Big Bad Wolf,” which is doom-laden, menacing, ominous, infectious, and full of bile and vitriol.  Having an industrial style with tension building guitars and vocals, this song is addictive as hell, encompassing the best of what In This Moment are.  Next, “Dirty Pretty” begins with a screen siren voice-over, then launches into a Manson-esque style riff, while the chorus is more Shirley Bassey.  The track is a roller-coaster of styles and really shows off Brink’s vocal ability and range, which characterizes the band’s sound.  The song also digs into the issue of feminism and media expectations, an issue that Brink’s is well acquainted with as the media focus on her looks over her talent.

Title track “Black Widow” begins with a ’50s information voice-over about the spider.  Clearly showing that the feminist theme runs strong throughout the album, this is very electronic in style and would fit well on dance-floors, clearly labeling Brink as a powerful vocalist. “Sexual Hallucination” features additional vocals from Shinedown’s Brent Smith.  While not a match some would expect, the two vocals work perfectly together and the song is almost erotic in the way the vocalists’ tones blend. The musical style of the song is lighter, building for the chorus which is more Rock than Industrial in its approach, making this a stand out midway through Black Widow.  This is followed with lead album single “Sick Like Me” which is heavy. With its thundering bass, hammering drums, and dirty riffs, it batters the listener into submission. “Bloody Creature Poster Girl,” which at times sounds like ‘Betty Boop’ is singing, is again a song about the portrayal of Brink by the media. The song itself is clever, switching from the sugary sweet to repulsive, bitter screams. Slow and sensual, “The Fighter,” with Michael Spadoni on piano, is the nearest In This Moment get to a ballad — that is if a ballad could be this passionate and heartfelt. ‘Ballad’ suggests something more trivial, but this is darker than a love song; it’s poignant and uplifting, yet filled with sadness.  Directly following is “Bones,” which is a chilling statement of limerence.  While it is a love song, this is not the wholesome type of love, and it goes deeper — even to the grave. Beginning with a Biblical quotation, “Natural Born Sinner” is a declaration of religious standing and a rejection of formal religious bigotry and hypocritical behavior. It seems to be mainly aimed at same sex marriages, and the church’s controversial views on them. “Into the Darkness” is an emotional interlude before the final song.  Featuring some dark whispered thoughts and Brink sobbing openly, it is  an uncomfortable yet compelling prelude to “Out of Hell,” a melancholy piano led song, which relates the sad tales of a young prostitute and a drug addict. Also addressing homelessness and child abuse, it’s a haunting way to end Black Widow.

In this Moment have a distinct sound of their own, and while Black Widow is still very much them, it also has a greater variety and is more accessible than their previous work. In This Moment are very much centered around their charismatic singer, and with a voice like Brink’s it is difficult to ignore her dominance. The work on Black Widow is musically strong, too, with some killer riffs. What is different is that there are not any polarizing songs, whereas in the past the group went too far with screams, and the aggression, at times, could be off putting. With this album, they have controlled it a lot more, creating a more consistent feel.  All in all,  Black Widow is In This Moment’s best album yet.  CrypticRock give this album 5 out of 5 stars 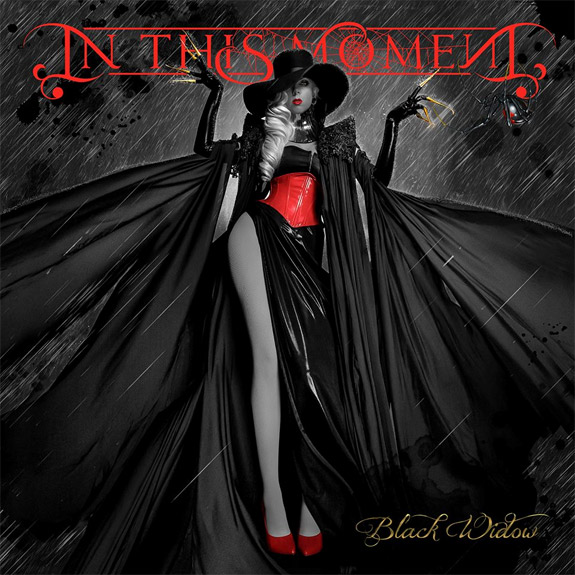