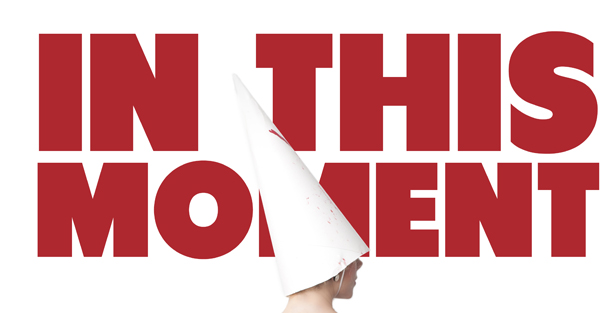 You’ve heard the song, now it’s time to see the video – IN THIS MOMENT are proud to unveil “Whore” in its full cinematic splendor, and have released the song’s official music video today across Clear Channel’s nationwide network of websites. You can watch the video on your favorite Clear Channel Active Rock radio station website or Facebook page, or on iHeartRadio.com. Here is the video:

The video has a stark voyeuristic feel, combining the theatrical aplomb that marks IN THIS MOMENT’s live performances with visuals that are as compelling as they are disturbing. Directed by Robert Kley, who was also at the helm for the band’s “Adrenalize” and “Blood” videos, “Whore” co-stars MOTIONLESS IN WHITE frontman Chris Motionless. “His look is so perfect for the dirty vintage feel of the video, and he was a perfect gentleman while being violated by me,” says IN THIS MOMENT frontwoman Maria Brink.

“I knew how amazing placing the visual arts to ‘Whore’ would be when we wrote it, and I have been waiting to release this video since we recorded the song,” Brink continues of the band’s new video. “I am so passionate about the concepts and every single detail that goes into shooting a music video, and I created my own stimulating visual metaphor to make this – I am grateful to have worked with Robert Kley again, he always seems to help me bring what I see in my mind to life. ‘Whore’ is a song that pushes boundaries, and I needed the video to do the same. The song is about taking back control. It is about rising above and finding the power within ourselves. I hope everyone enjoys it!”

Adds IN THIS MOMENT guitarist Chris Howorth: “‘Whore’ is one of my favorite songs on ‘Blood’ and the video is the best we have created to date – it’s just as creepy and sexy as our live show, with a bunch of extra surprises. Maria really outdid herself on this one… this is her twisted vision brought to life, enjoy!”

“Whore” continues to climb at radio, where the track currently sits at #17 with a bullet on the Active Rock charts. The song is the third single from IN THIS MOMENT’s breakthrough album ‘Blood’ – released in August 2012 on Century Media Records, it marked the highest debut of the band’s career, entering the Billboard Top 200 at No. 15 and selling more than 20,000 units first week. The record has emerged as one of the best selling rock albums of the past year, recently surpassing 200,000 in sales according to SoundScan.

IN THIS MOMENT are kicking off 2014 with THE HELLPOP TOUR II. Set to launch January 2 in Portland, OR, the 16-city tour wraps January 25 in Cape Coral, FL, where the band will then make a return engagement on the SHIPROCKED cruise January 26-30, which sets sail out of Miami, FL, to Great Stirrup Cay, Bahamas. For more information, visit www.shiprocked.com. Joining IN THIS MOMENT on HELLPOP II are BUTCHER BABIES in direct support, DEVOUR THE DAY and ALL HAIL THE YETI. The band wrapped the first leg of their headlining HELLPOP extravaganza November 27 in Los Angeles.

The 2nd leg of HELLPOP II in Janruary 2014 (BUTCHER BABIES, DEVOUR THE DAY & ALL HAIL THE YETI in support) dates are as follow: