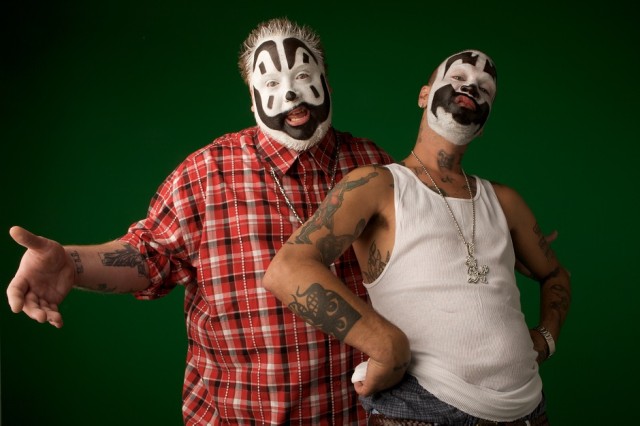 Insane Clown Posse; Violent J (Joseph Bruce) and Shaggy 2 Dope (Joseph Utsler), came straight out of Detroit Michigan, specifically Oak Park, listening to pioneering Hip Hop groups like 3rd Bass, Beastie Boys, N.W.A, as well as local rappers like Awesome Dre while backyard wrestling.  Going by the name, JJ Boys, Joseph Bruce, as Jagged Joe, Joseph Utsler, as Kangol Joe, and John Utsler, as Master J, released the single titled “Party at the Top of the Hill” just to do it, but nothing serious.  Problems at home made Bruce move in with Rudy “The Rude Boy” Hill in nearby River Rouge.  There, he formed a gang with the guys he regarded family, Joseph Utsler, Rudy Hill, other friends of Bruce, and a number of other connections he made in Southwest Detroit, thus, landing him in jail for ninety days in 1989–1990 for death threats, robbery, and violating probation; an experience that convinced him to 86 his involvement in gang life.  After jail, Bruce began his professional wrestling career, but quickly tired of the politics, so he fell back on doing Hip Hop in clubs using the stage names Violent J, 2 Dope, and John Kickjazz, under the name of their gang, Inner City Posse; with manager Alex Abbiss, they established the Psychopathic Records label in 1991.

With money tight, the group left the trending Gangsta Rap genre for Esham’s Horrorcore style, marrying Detroit’s Acid Rap utilizing the Horror-themed lyrics to talk about their life experiences, and not overtly talk about Satan like Esham.  With the new musical style established, the guys decided a name change was in order amd Insane Clown Posse was created based on a dream Bruce had of a clown running around in Delray.  Adding to their legacy, getting an idea from their former hype man, Insane Clown Posse decided to wear make-up.  That night, Bruce says he had a dream in which “spirits in a traveling carnival appeared to him”—an image that would become the basis for the Dark Carnival mythology detailed in the group’s Joker’s Cards series.  As they say it, the rest is history and Insane Clown Posses has become one of the biggest acts in the entire world.  Thirteen albums on (divided by what the group terms decks, ten in the first deck, now three in the second), fans are brought to 2015’s The Marvelous Missing Link: Lost, produced by Mike Puwal and Otis and released by their Psychopathic Records on Violent J’s 43rd birthday, April 28th.

In tradition of their other albums, The Marvelous Missing Link: Lost begins with an Intro, a piano solo accompanies a wicked voice announcing, “The mysterious missing link.”  Insane Clown Posse’s smooth delivery breaks the hypnotic synthesized air whistle as the bass kicks in, proclaiming to find your link, your faith, but really believe in your faith…to find the light.  The mastering on The Marvelous Missing Link: Lost is so seamless that the space from “Intro” to the next track, “Lost,” is non-existent. It tells the story of the devil’s displeasure in our happiness, so he has to throw a wrench in the works.  It is up to us how we handle the situation, “Look and find, don’t stop your quest.”  This track has a noir-ish intro that follows throughout as a Friday the 13th Part II (1982) like theme plays underneath.

On “Apocalypse” a thumping bass line cuts through while a double-time beat let the audience know the urgency of the message of the drug dealers and gangbangers bringing Armageddon/Apocalypse before they know it, singing, “Say goodbye the world, the world as we know it.”  “Shock” is another double-time beat track with what sounds like automatic gunfire that plays throughout that talks of the tripped out, hallucinating junkie as Insane Clown Posse raps, “Standing in traffic, what went wrong?”  Next, “Confederate Flag” has a laid back car-bouncing beat, this time, the double-time takes a  backseat with a light snare as the turntables get worked while the guys state their stance on prejudice, “ No matter where you live, you should hate that flag, because it represents evil bigots.”

Moving on to “Vomit,” with an exorcism intro as synthesizers and deep bass, brings in Insane Clown Posse’s parable of doing right by people; otherwise, the devil will do the evildoer dirty for eternity and  the track ends with God’s lightning striking the evil down.  “Falling Apart” brings guitars into the mix with synths and an urgent double-time high hat followed by a smooth bass line as Insane Clown Posse raps of someone hitting bottom. Then there is “How,” which has a Nelly-like melody akin to “Just a Dream” in this genuinely light, hand-raising track of how can one live in this screwed world.  An instant array of sound assaults the ears as “Explosions” begins in this piece of the terrorist, domestic or foreign, by asking from the get go, “What type of man?…I plant bombs in my lawn for ATF.”  “Keep My Hatchet” seamlessly flows from “Explosions,” beginning with an jump into a twisted melodic piano riff juxtaposed by gunshot samples while the guys take digs at people who would do drive-bys or snipe innocent people by calling them out to face them head-on, “I don’t need artillery to feed the thrill in me…I’m kind of a hands-on guy.” “Neighbors are Fighting” rails on neighbors arguments that escalate into cop-calling and body bag conclusions with a signs throwing beat.

Then there is an Insane Clown Posse love song, “You Should Know,” with a slow, laid back approach featuring underscored guitar riffs, and an ’80s keytar bridge that tells of what they grew up with as role models for treating women they love.  With a warped Iron Man inspired intro, “Flamethrower” throws the listener into a vigilante’s psyche, “We don’t need no water…We did our research well, and we picked out our spots.”  Closing out The Marvelous Missing Link: Lost is “I See the Devil,” an apropos finish to this superior entry in another era of Insane Clown Posse’s career in this extremely anthemic piece, musically and vocally.

Insane Clown Posse’s no nonsense, intentionally eschewing any comic elements, Horrorcore style imagery married to Metal/Hip Hop, tinged with occasional melodic piano/synth work, coupled with smooth line delivery and sometimes raspy dulcet choruses, bordering on R&B belies the positivity that pervades The Marvelous Missing Link: Lost.  July 28, 2015 is the scheduled date for the flipside, The Missing Link: Found, released to coincide with their annual “Gathering of the Juggalos” festival. So, in the meantime, followers can dig into this new masterpiece. CrypticRock gives The Marvelous Missing Link: Lost 5 of 5 stars. 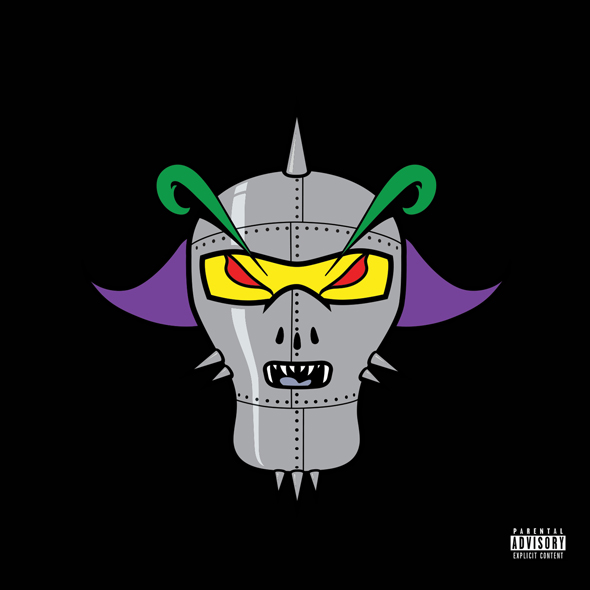