Some people would do literally anything for a baby! In fact, in recent years in the U.S. alone, there have been over 306 cases of infant abduction, with 10% of these cases occurring while the mother is still pregnant. Just one of these terrifying stories, the latest Horror/Thriller offering, Inside, which saw a limited theatrical run and hit VOD on January 12th before finally makes its way to DVD on Tuesday, February 13th thanks to Vertical Entertainment and Lionsgate. 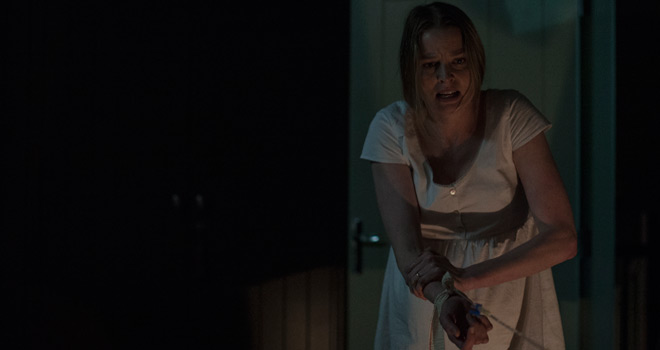 On a rainy evening, expectant parents Sarah (Rachel Nichols: The Amityville Horror 2005, Star Trek 2009) and Matt (Maarten Swaan: Day Release 2015, Realive 2016) are driving home when they feel their unborn daughter kick for the very first time. As the joyous couple engage in a debate on names for their precious child, they quickly fall victim to a horrific accident that changes everything.

Now, in the suburbs of Chicago, in a development called Sunshine Grove, Sarah is attempting to pick up the pieces of her former life while preparing for the birth of her daughter. With the love and support of her kindly neighbors Isaac (Ben Temple: [Rec] 2007, Wild Oats 2016) and Brian (David Chevers: Anna 2013, Meagan Leavy 2017), along with her mother, Sarah is facing the final days of pregnancy with anxiety for the future while attempting to remain hopeful. When she settles in on Christmas Eve for a quiet but rainy night alone, her solitude is quickly interrupted by a knock at the front door. On the porch, a mysterious woman (Laura Harring: Mulholland Drive 2001, Love in the Time of Cholera 2007) demands entry and she seemingly won’t take no for an answer. 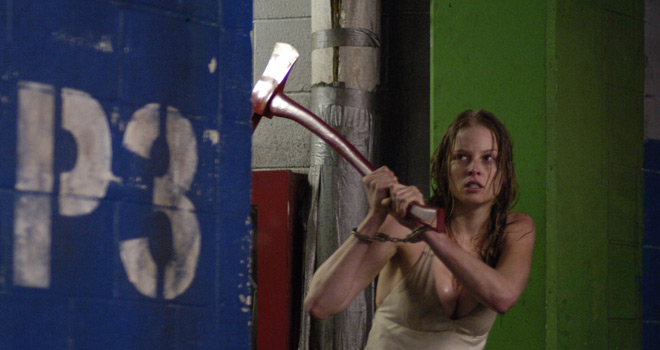 For anyone not in the know, Inside is actually a retelling of the 2007 French film À l’intérieur. For those that have not witnessed the original, this version is a wonderfully executed production that, while not exactly depicting the most unique of plots, does a splendid job with all the important little details, creating a truly haunting picture. While it is billed as a Horror-Thriller, the film reads more like a Thriller-Suspense flick, and it does a stellar job of keeping its audience’s attention with some slight jump-scares and several jaw-dropping, truly cringe-worthy scenes. For these reasons and quite a bit of blood, the film should be considered at least a PG-13.

While the idea of a pregnant woman being tormented for her unborn child is not exactly original, Inside does a good job of weaving the tale with dark, moody lighting, some artistic visual cues and a lovely attention to detail. Coupled with the ensemble cast’s phenomenal acting, this is a film that will easily hold your interest and leave even the non-pregnant ladies in the audience to clutch their abdomens in fear. Harring, as the woman in black at the center of all of this, is deliciously vile and marvelously cold and calculating. She gives a truly haunting performance as she skulks about, hellbent on obtaining Sarah’s child no matter the cost. As her would-be victim Sarah, the woman in white, Nichols does a phenomenal job of not only acting nine months pregnant and partially deaf, but truly embodies the spirit of her kickass character who refuses to simply lie down and give up. She fights to the bitter end with a kind of poise and intellect, never once making those common and all too deadly Horror movie flubs; which makes her one distinctly bad-ass mother. 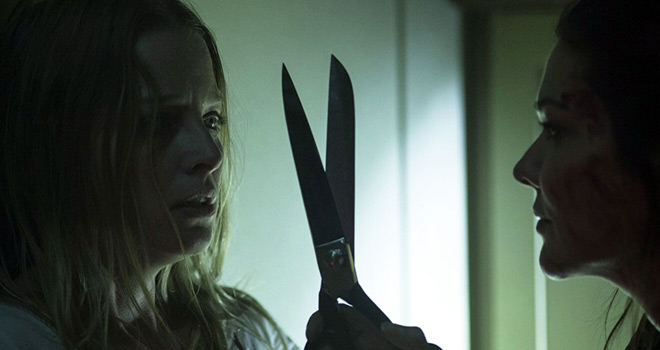 Inside, therefore, is a wonderfully done film that will bring a shiver to its viewers. Deliciously deviant, bloody violent, and with quite a few truly shocking moments of suspense, this is a film that takes a standard-issue plot and works magic with attention to detail and phenomenal acting. Harring and Nichols are perfect arch-enemies here, the ominous woman in black versus the loving mother in white. For actually managing to make us complete a full-body cringe several times, CrypticRock give Inside 4 of 5 stars. 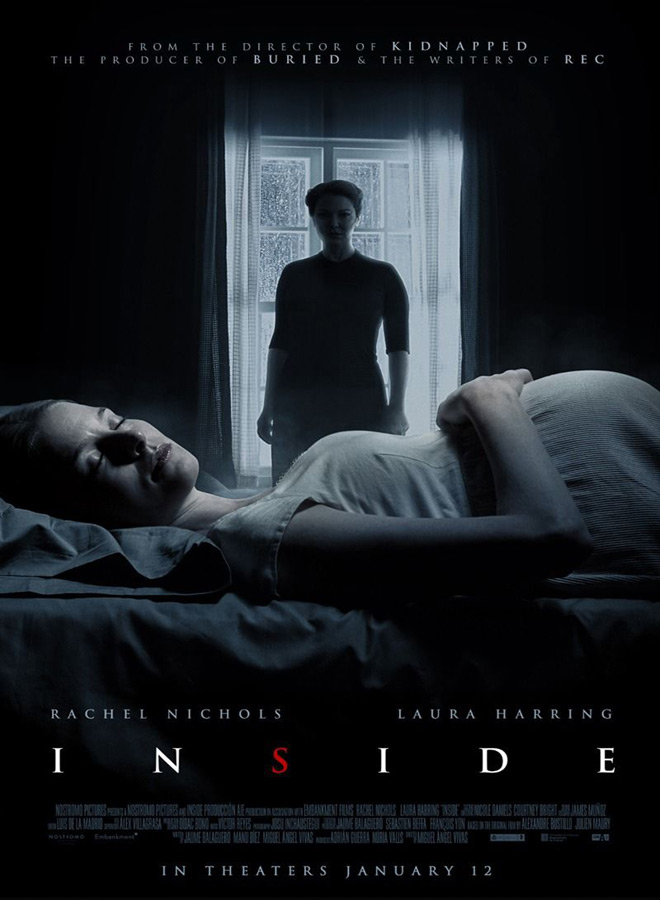