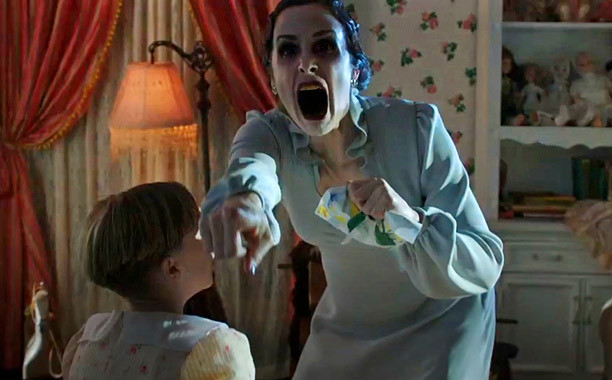 In 2010 modern horror director James Wan’s Insidious debuted in theaters. The film was an interesting mix of modern paranormal ghost hunting style horror while taking parts of classic ghost style horror. With an interesting plot and many subplots the film was overall entertaining, predictable, kind of absurd, and confusing at the same time.

Nonetheless it was not a terrible horror movie by modern horror standards by any means. Wan clearly has a particular style, as since Insidious (2010) he directed a similar ghost style story in the summer horror hit The Conjuring (2013). Just a few months after the success of The Conjuring (2013) Wan releases Insidious: Chapter 2 (2013). Directly off the bat they did an excellent attempt at marketing this film releasing it on September Friday the 13th to add to the effect.

First thing first, it’s highly recommended you see the first film before even attempting to seeing this film. The plot is far too confusing for you to attempt picking up this story without seeing the first film. If you already saw the first film, do yourself a favor and watch it again to refresh your memory.

Insidious: Chapter 2 (2013) begins with an opening scene into the past of a young Josh Lambert, Elise Rainier (the psychic), Lorraine Lambert (Josh’s mom), and introduces a new character in Carl (another psychic). This scene fills in some missing pieces to the puzzle from the first film. After this flashback we are brought into the time directly after Elise Rainier being murdered by Josh Lambert after returning from “the further” (or is it really Josh?). This is where our plot thickens and we are to explore the fact that Josh is very well possessed by a evil spirit after returning with his son Dalton. From here on the story moves at a steady pace and provides the audience with back story of our evil spirit from the first film, the bride in black. As if there aren’t enough subplots in the story already we are lead into the dark world of the bride in black and how they came to be. This story itself is rather interesting and very creepy.

While this evil entity’s character is being developed we see the further development of other characters such as Lorraine Lambert played by Barbara Hershey. It was absolutely important to provide viewers with the back story of Josh and his mother’s past to exactly understand what is going on. You will find yourself at points in the film saying oh so that is why that happened in the first film. While certain aspects of the picture become focused Wan manages to throw a few more twists at you. One of which being ghost time travel, yes you read that right ghost time travel. Even to the biggest of horror film buffs would find this concept is rather absurd and confusing.

As tension builds in the film it’s clear the demon haunting Josh will stop at nothing to kill his whole family. It is up to our main character from the first film, Dalton, to go back into “the further” to find his father Josh to help him reclaim his body and stop the evil spirit once and for all. In the midst of this task the audience can’t help but laugh to see a little boy go into a deep sleep to find his father’s soul while his possessed father’s body is smashing down a door with a fire extinguisher. In what seems to be a happy ending for the Lambert family is a confusing ending for the audience leaving the book open for Insidious: Chapter 3.

Where the film lacks in cohesion in story it excelled further character development in this film. It’s all too often in modern horror films all characters involved are completely unlikeable. This is not the case in this film as you do not dislike all main characters and you’d actually feel bad if something happened to them. That is key in horror and is somewhat of a lost art now a days. An audience must be able to connect with the characters on some level and grow some sort of attachment to them and their well being. Wan deserves credit for accomplishing this with the film. It’s difficult to be completely critical of his story development abilities because it appears the Insidious saga is the type in which everything will come together in the end. It is very possible that even though certain aspects of the story thus far seem predictable and clichéd that they are not at all. We can only hope that things do come together at some point along the way because making a horror film with a bunch of confusing subplots annoys non-casual viewers.

Insidious: Chapter 2 has a lot of eerie imaginary, tension building moments, and stimulating ideas. You can see elements of Poltergeist (1982), and even Psycho (1960) in the film. There is no doubt that a majority of the film’s ideas are borrowed from horror classics, but hey we are not reinventing the wheel here. Horror films in modern times are primarily remakes and rehashes so let’s give Wan credit for attempting to create an original horror film here. Old school horror fans may be divided on this film but more casual viewers may find it enjoyable. Overall Insidious: Chapter 2 is an entertaining horror film worth giving a watch. Where some may have tapped out after the first film you may actually enjoy this second film more. Cryptic Rock give this move 3 out of 5 stars. 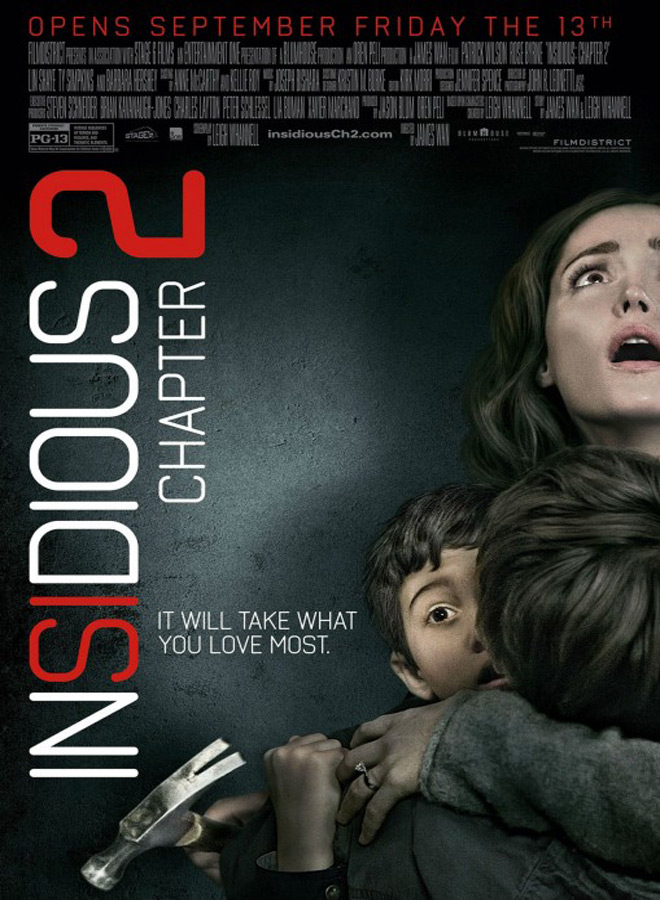