More than most other artistic mediums, film translates human expression in an intense, real, visual matter. Often, facial expressions and body movements can tell a story all their own, even without the benefit of dialogue. Coming from a background in photography, Germany’s Andreas Neumann teamed up with Queens of the Stone Age’s Josh Homme to bring the magic of what could be Iggy Pop’s final studio album, Pop Post Depression, to life on video in the form of American Valhalla.

An engaging film documenting the recording, production, and touring of the Homme/Pop collaboration, American Valhalla attained critical acclaim in its 2017 theatrical release. Now in 2018, it hit DVD and digital formats as of March 9th, reaching a larger audience than ever before. Recently we caught up with Neumann to talk about his experience working with Josh Homme and Iggy Pop, what he learned during the making of American Valhalla, plus much more.

CrypticRock.com – You have been involved in the arts for many years as a photographer. What has your experience been like behind the lens?

Andreas Neumann – Being behind the lens, first of all, is that you have to master and deal with light and all the technicalities which come with shooting something. Even more important, in my opinion, is to be able to connect with your subjects in a way so they give you themselves, without putting any mask on. I think, in photography and filming people, that is my talent, to bring out the real person. That, and a combination of the right light, frame, colors, or B&W is what makes great pictures and films in this case.

CrypticRock.com – Very good and interesting points. In 2017, you released the compelling Documentary American Valhalla. What brought on your involvement in this project with Josh Homme and Iggy Pop?

Andreas Neumann – Josh and I knew each other socially for a while and always wanted “to do something together.” One day he called me spontaneously and said he wanted me to shoot photos in the desert where the group of artists who recorded in the secret project, Post Pop Depression, were. You never say no to big Josh. (Laughs) That first photo shoot turned out so well that it led to making the movie in the end… and lot’s more photos. First part of the interview session was shot in Miami in Iggy’s art house. This is where we shot as well the record cover of PPD, and the whole journey started.

CrypticRock.com – Very cool! The film revolves around the making of Josh and Iggy’s Post Pop Depression record and the tour that followed. What was the experience like documenting this experience?

Andreas Neumann – I tell you – it was my first concert tour ever, since my background is not music really – it’s more advertising, fashion, etc. Even the veterans on the tour said that this tour was the best of their whole career. I thought it was a great one to start. Being so close with this caliber of artists for a period of time is like taking a creative bath – and that bath changes you forever…

CrypticRock.com – It sounds like an amazing experience and that translates in the film. Josh Homme and Iggy Pop are two very interesting personalities and talented musicians. What was it like working with them?

Andreas Neumann – Josh is a creative powerhouse and so is Iggy, and both are obviously incredible subjects to get in front of a camera. Being so close to Josh, it felt like I was able to translate what comes out of his creative brain into visuals. Josh is truly a multi-dimensional artist – being his visual partner as well opened and liberated me in many ways and influenced the way I create things now as well in other genres of my creative work. How could the subject be better than Iggy Pop’s last album. What a creative responsibility, right?

CrypticRock.com – No question about it! There is really some wonderful imagery caught on film with American Valhalla. As co-director, co-producer, and cinematographer, how did your background in photography assist in the making of the film?

Andreas Neumann – Well, I really put in all I learned over the years into this project. It is my best piece of creative work so far. I tried to have not one moment pass in the film with a “boring” shot or perspective without being over the top or too constructed. But again, with the “real deals” in front of the lens, it makes it easier…

CrypticRock.com – Yes, and as stated, you do a great job of capturing the experience in a vivid way. American Valhalla was released in 2017 in select theaters, but recently hit DVD on March 9th via Eagle Rock Entertainment. How exciting is it for you to see it get a home video release like this?

Andreas Neumann – It is super exciting to now finally have it available for everybody. Fans for sure all over the globe have been waiting to see it, now it’s there. Enjoy! Funny, in Japan, it is coming out in the cinema again. 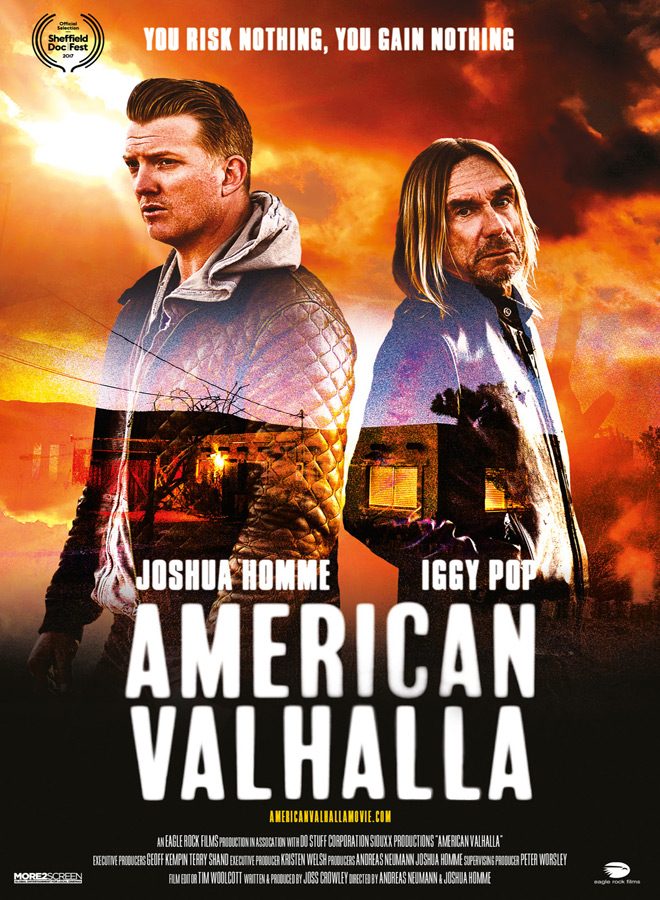 CrypticRock.com – That is great! It will be interested to see what a larger audience thinks of it. With American Valhalla completed and released, can we expect you to take on further film projects in the future?

Andreas Neumann – Yes, I am working on some projects as well as a multi-episodic feature. I will continue to work with Josh as well as with the Queens of the Stone Age and shoot a lot of footage for them making their current album, Villains. Maybe another great documentary coming. (Smiles)

As well, there is the last piece of the Post Pop Depression puzzle coming… the 350 page American Valhalla limited edition coffee table book showing unseen photos, and it will include the famous centerpiece of the movie. “The Fedex “ of Iggy to Josh.

CrypticRock.com – Awesome, that is something to look out for. Last question. We also cover Horror and Sci-Fi films on CrypticRock. If you are a fan of either or both genres, what are some of your favorites and why?

Andreas Neumann – Funny, the script I am working on falls in that genre. I am a big fan of Stanley Kubrick’s The Shining (1980). That is kind of as good as it gets. The build-up, the change of the character, just an absolute masterpiece. Scary through story, innovative camera, dialogue, and great actors. What a movie!