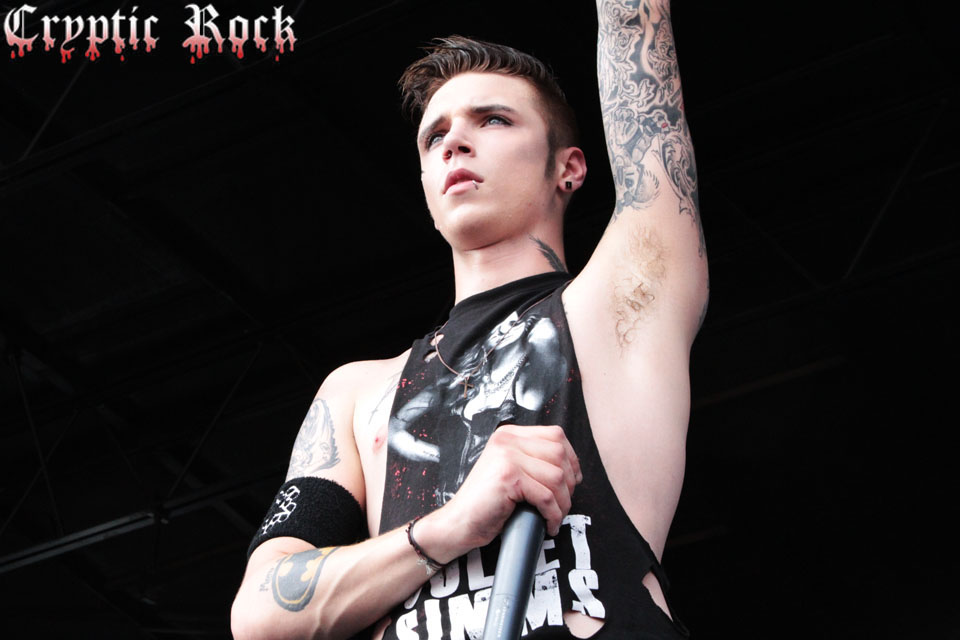 In 2013 rock n roll does not have a distinct identity. With many sound a like and look a like acts Black Veil Brides dare to be different. Gradually building an army of fans since their inception in 2007, these rockers are not stopping anytime soon. With a theatrical stage persona the guys have resurrected the mystique and fun that rock n roll once had in the late ’70s into the ’80s. With an impressive list of awards won already, in 2013 the band won Revolver’s Golden Gods Awards: Song of the Year 2013 for “In The End” and Relentless Kerrang! Awards 2013: Best live band. Fresh off their 2nd Warped Tour Cryptic Rock sat down with lead singer Andy Biersack for an in depth look at the influence behind the band, living the rock n roll dream, and much more.

Crypticrock.com- First and foremost congratulations for being on Warped Tour this year. How excited is the band to have this opportunity and how is the tour going thus far?

Andy Biersack- Honestly I grew up going to warped tour every year. Having the opportunity to be one of the headlining bands on the tour, being able to play main stage every day, getting along with everyone on the tour, Kevin Lyman has been so sweet to us… it’s definitely one of those things that you kind of have to pinch yourself and say wow I got to do this thing that I dreamt of when I was a kid. Regardless of whatever else happens in my career and my life I will always say I got to do this. I am incredibly excited and I’m sad we are in the final week here.

Crypticrock.com- It has to be an incredible experience especially your second time on the tour. Black Veil Brides is now 3 records and a few EPs deep into your career. Has your approach changed at all since your debut EP in 2007?

Andy Biersack- I was 16 when we made the first song. We’ve been touring for half a decade together and we’ve had quite a bit of time spent learning our craft. You improve as a song writer and as a musician over time. I’d say Black Veil Brides in 2013 writing and recording is obviously exponentially more I guess mature, I hate to use that term, I think we’ve become the band we were always meant to be. I’m excited to continue to write music, and hopefully going into next year, get another record going.

Crypticrock.com- That is something to look forward to. Your latest album Wretched and Divine: The Story of the Wild Ones was released earlier this year. The album is receiving massive success. What was the concept going into this record and what do you think the key to success is?

Andy Biersack- I think honestly we tried to break everything down for this record. Going into previous albums we tried to write off of things we had or put stuff together in more of a quick way. We didn’t necessarily have the budget or the time to always sit down and strip everything down and figure out what would make the best song. With this album we were able to kind of go back to the basics, take everything away, and write the basis of a song. I mean a song can work if it’s done with acoustic guitar or piano, it can be done with crazy guitar solos or drums. I think ultimately it was making sure to put the songs first and making sure that the songs that made the album were the best songs possible.

Crypticrock.com- It definitely has worked for you guys. You mentioned that when you started you were 16 years old, you were really young. The music and the band has evolved. What are some things you learned over the years to keep the chemistry between band members and keep things balanced?

Andy Biersack- I think it’s learning people’s personalities. I think the biggest faults that bands tend to have in terms of drama or breaking up is bands don’t learn people’s personalities. When you spend as much time with people obviously it’s going to rub off, and you are going to get to know the way people are. You can make sure day to day people are accommodated to and people feel positive about the experience, then you can stay together as a band, at least that is my opinion. We are also very close as a band, we are the kind of band that has not been incredibly social over the years. We’ve only just now been starting to really become the kind of band that is hanging out with other bands. We’ve always kind been us against the world. I think maybe in that regard our level of importance toward maintaining a strong cohesive unit has been much greater.

Crypticrock.com- That is something that evolves over time with a band. Obviously you guys have the right formula and you know what works for you. With all the success that comes to any band there are naysayers and negativity. I am sure you are well aware of this as any band which gets a level of popularity does. What I want to know is how does the band deal with the negativity and is it something you learn to brush off?

Andy Biersack- I think it’s like with anything. When you’re a little kid growing up you have a toy that you like and someone else wants it, you say no it’s mine, and they say well I didn’t want it anyway it’s stupid. It’s when you make something you are very passionate about, and it’s doing well, people tend to attach themselves to it negatively, have it through jealousy, self righteousness or whatever else. I don’t think we’ve ever really attached much importance to negativity and people saying negative stuff. We have enough of a strong fan base and we’ve done well enough in our career that we’d be remiss to not pay attention to the positives and dwelling on the negative part.

Crypticrock.com- That makes perfect sense. There is definitely more positive than negative. When it comes to any band, actor, or artist as soon as they reach a level of popularity people have negative things to say.

Crypticrock.com- That is a good way to look at it. A big part of what people speak of when they mention Black Veil Brides is the image. Of course the music is most important but you have a eye catching image that is similar to the 80’s glam metal. I personally think that is the kind of flare and fun that rock n roll has missed for so many years. It’s great to see that type of theatrics on stage again. Tell me what the idea behind the image of Black Veil Brides is?

Andy Biersack- I don’t think we ever sat down in the early days and said “hey lets be a band that wears make up”. I think it was just natural for us. We grew up loving stuff like Alice Cooper, Kiss, The Misfits, and the more theatrical stuff. I always loved rock stars. I loved David Bowie and Freddie Mercury, and these people that were larger than life and iconic. I think that is what we always wanted to do. There was never a conscious discussion of us saying “hey you guys want to be the band that wears make-up”. I think we all grew up liking the same stuff and when we got together it was like this is what a rock band does.

Crypticrock.com- It’s just a natural thing for you guys because it’s part of influences. You mentioned some great bands there. I’d like to know what some of your musical influences are?

Andy Biersack- Me personally, I side more with punk rock bands. I grew up with The Misfits, The Dead Boys, The Damned, Dropkick Murphys, and early AFI. That was the stuff that really got me into music. Song writing wise, bands like Alkaline Trio were very important to me for beginning to write songs. I think like anybody I discovered rock music through the classics. I discovered Kiss first, Aerosmith, Mötley Crüe, W.A.S.P., and L.A .Guns. For me it’s a little bit of both of those worlds. I’d like to think Black Veil Brides is like that in a lot of ways.

Crypticrock.com- Yes, Black Veil Brides does take something from all that stuff you mentioned. I know you guys are going to be going on tour with Bullet For My Valentine this fall. Are you looking forward to that tour?

Andy Biersack- Yea, we’ve been talking with them for years. In this world you tend to meet and hang out with a lot of other bands at Kerrang! awards show and whatever else. Although we’ve never been social butterflies, we’ve always been very cordial with each other, we’d hang out at bars, and said “oh wouldn’t it be great if we got a tour together one day and all the fans would love that”. Finally we had the availability, they just put a record out, and we were able to get it together. We’re excited to go out on tour with good people.

Crypticrock.com- That should be a great tour. My last question for you is regarding films. Crypticrock.com is a rock/metal and horror news site so we like to focus on all genres. Are you a fan of horror films and if so what are some of your favorite horror films?

Andy Biersack- I am a big fan of the classic Universal Monsters. More recently I liked Insidious quite a bit and I am excited to see The Conjuring. I like movies where the monster is scary. I think more horror movies tend to be dumb CGI gore or jumps just because the music got loud. I like more aesthetic horror movies. That is why I enjoy those.

CrypticRock.com- You mention about CGI gore there. I tend to agree with you, I’m not a fan of the CGI gore I rather some natural make-up effects. What do you think of how horror is gone in the last decade or so?

Andy Biersack- There are some good things, but like anything, it’s the same way like rock n roll has gone. Things go through trends. People stop caring about actually doing something legitimate, people stop giving a shit, and they are spoon feeding people stuff. I think with movies like Insidious, I heard good things about The Conjuring, obviously Rob Zombie still makes movies that are very aesthetically interesting… I think there is a lot out there. I think in terms of mainstream horror movies you’re seeing more and more studio based, “what is the easiest thing to spoon feed people” , but I think it will come back.