Beyond a shadow of a doubt, anyone who knows anything about classic Heavy Metal is versed in the turbulent world of a band called Saxon. First surfacing in 1977, Saxon was born into the infamous New Wave Of British Heavy Metal, a period in time when the music of British Metal acts like Iron Maiden, Angel Witch, and Def Leppard, to name a few, crossed the pond, changing the youthful face of Heavy Metal in North America back in the late 1970s early 1980s.

Offering western civilization a fresh taste of true British Metal, Saxon rose to the occasion and stormed fans with a loud education in Metal via daring and spirited numbers like “Crusader,” “Never Surrender,” and “Heavy Metal Thunder,” which bred a rumbling sound nearly registering on the richter scale. For anyone who may have lost touch, you don’t have to go far to find out what Saxon is up to today. Early 2018 saw the mighty Saxon – Biff Byford (vocals), Paul Quinn (guitar), Doug Scarratt (guitar), Nigel Glockler (drums), and Nibbs Carter (bass) – release the earthshaking new album Thunderbolt, a startling reminder of the power which has held Saxon atop the mountain of Metal for forty plus years.

After all these years, Saxon continues to thrive as one of the hardest working bands in the business while staying in touch with the signature sound which brought the band a level of success they exceed to this very day. Offering some of his time, Saxon frontman Biff Byford recently kicked-back to talk about the band’s legacy, Thunderbolt, and more.

CrypticRock.com – First of all, congratulations on the success of Saxon’s latest studio album, Thunderbolt. Within a short period of time, Thunderbolt became the band’s biggest selling album in the United States since the 1980s. Showing how powerful and relevant Saxon is in 2018, how does it feel for the band to attain such success?

Biff Byford – Thanks. The timing was perfect with the release and the tour with Judas Priest was great. I think the songs are all special.

CrypticRock.com – Special for sure, the tracks certainly rock hard. That said, Thunderbolt is your 22nd overall studio album, can you fill us in on the creative process at this point in the band’s tenure? Has the process changed for you in any way after 40 years of writing Heavy Metal music?

Biff Byford – As far as writing goes, I will usually work with a guitarist or on my own. I did a lot of this album with Nibbs, as far as the music goes, writing lyrics on my own, and then weaving in melody. 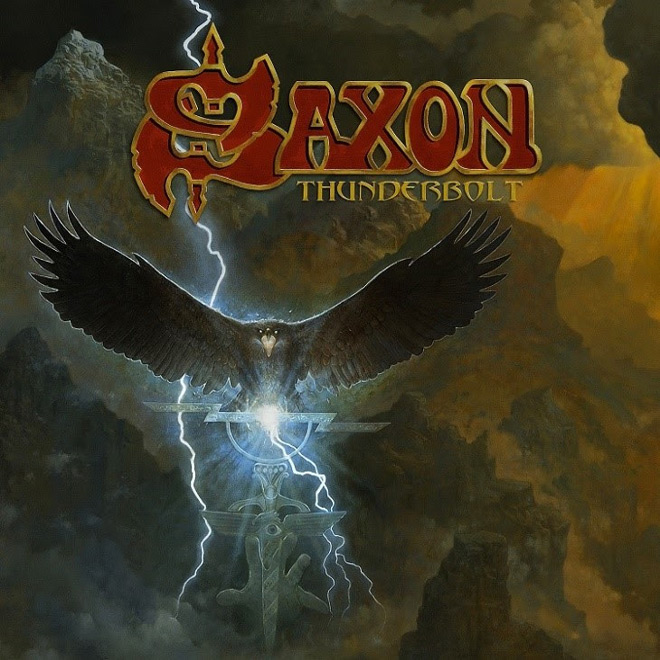 CrypticRock.com – Well, the overall songwriting on Thunderbolt really shines through. After all this time, Saxon continues to release a great new album every 2-3 years. What drives you to consistently create new music?

Biff Byford – I just live to write and record, and with that it allows us to tour on the new albums.

CrypticRock.com – Alongside Black Star Riders, earlier this year Saxon played direct support to Judas Priest on the highly successful Firepower World Tour. Can you talk a bit about the tour and what you enjoyed most while touring with these great bands?

Biff Byford – It was a powerful tour, lots of fans came to the shows to see the lineup. All three bands were giving it 100% and people liked it.

CrypticRock.com – By far, it was hands down one of the best tours of the year. Staying on the subject of touring, performing live night after night can really take a toll on the body. How do you keep your voice in such great shape?

Biff Byford – I just try and keep fit and party within my boundaries. I don’t do any warm-up or take anything.

CrypticRock.com – It is well known that in 1979 Saxon’s first ever tour was with the legendary Motörhead. What is your favorite memory of Lemmy?

Biff Byford – Lemmy liked being Lemmy. He was a generous soul and I was his friend.

CrypticRock.com – Awesome, speaking for all Motörhead fans, Lemmy is sorely missed. Nowadays, with just the click of a button, fans can easily access their favorite music via a number of streaming services. There was a time when a fan could experience a deeper connection to the artist and the music by spending hours in a record store, bringing an album home, and enjoying the artwork, lyrics, booklet etc; something that is lost with streaming music. That said, what is your opinion on experiencing music via a physical copy versus streaming?

Biff Byford – You can still buy albums, but things are different now. We try to give fans a choice, so we support all the ways to get hold of our music. We spend a lot on artwork and product; CD, vinyl, cassette, streaming etc.

CrypticRock.com – Being a lifelong music fan, if you could pick one album in any genre, what album would you say had the biggest influence on you and why?

Biff Byford – The first Led Zeppelin album, it turned Blues into something much heavier.

CrypticRock.com – Led Zeppelin was, by far, responsible for influencing most, if not all music that followed their career. After 40 years of fronting Saxon, what are your proudest accomplishments?

Biff Byford – Keeping the band together.

CrypticRock.com – That is certainly an amazing accomplishment to be proud of. Last question. CrypticRock covers all genres of music as well as Horror/Sci-Fi films. If you are a fan of these genres, what are some of your favorites and why?