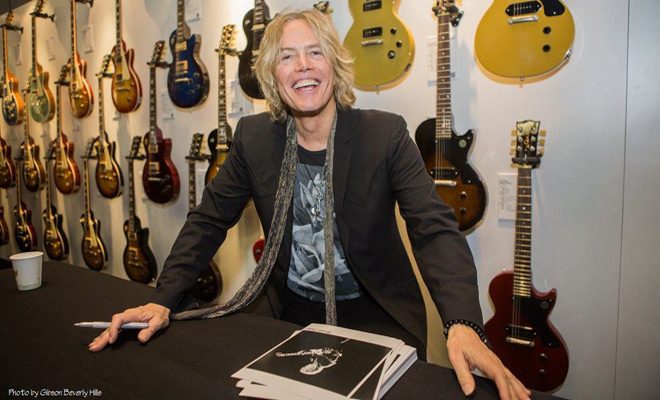 Growing up, everyone has a dream, but how many actually get to live it? Starting right out of high school, Brian Ray began his professional career as part of Bobby Pickett and the Crypt Kicker Five performing the “Monster Mash.” From there, he would go on to becomes Etta James’ musical director and guitarist. Writing and performing with artists such as Smokey Robinson, Rita Coolidge, Michael Steele, Shakira, as well as Adam Lambert, Ray has boldly worked alongside Paul McCartney for fifteen years now.

Accomplishments well-worth bragging about, Ray remains a humble man as he keeps moving forward doing what he loves best, rocking and rolling. Amidst it all, the talented musician finds time to write and record his own music, recently releasing a two-track digital-only single. Including the original A-side “Here For You” and the B-Side, a cover of Neil Young’s classic “Cinnamon Girl,” Ray shows he has a great deal to offer. Recently we caught up with the busy Ray to talk his unpredictable career in Rock-n-Roll, his lengthy work with Sir Paul McCartney, his inspirations as a musician, and much more.

CrypticRock.com – Over the past four plus decades, you have built quite an impressive career in Rock-n-Roll, working with everyone from Etta James, to Smokey Robinson, to Paul McCartney. First, tell us, what has this amazing musical journey been like?

Brian Ray – Obviously it sounds like a cliche, but it is truly a dream come true. As a three year old kid, I was exposed to Jerry Lee Lewis, Little Richard, Elvis, The Everly Brothers, etc. I fell in love at first listen. I knew when I heard The Beatles, The Stones, and The Animals what it was I wanted to do with the rest of my life. I am so grateful that I found a way, somehow, to roll the dice and make a living at doing something I love.

CrypticRock.com – It really is fantastic. You had begun your professional career quite young, right out of high school. Would you say these experiences shaped you into adulthood and your perspective on life?

Brian Ray – There is no doubt about it. All the experiences I had growing up as a kid in music and around music shaped my musical tastes, musical vocabulary, and my passion for music. Also, a world view, there is something that comes along with playing music. You are exposed to the artists you idolize and look up to, those artists seem to share, generally, a common world view. It is all encompassing. 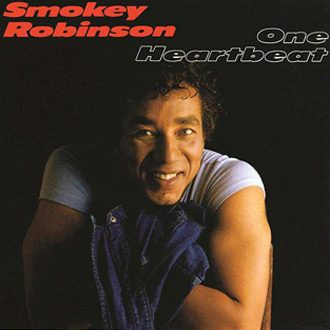 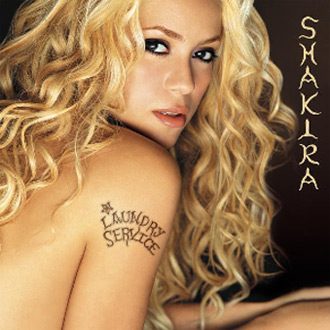 CrypticRock.com – Yes, that makes a lot of sense for sure. As a teenager, you are developing your opinions, and if you have grown with music, it clearly changes your worldly views.

Brian Ray – No doubt about it. Also, along with having a half-sister who was 15 years my elder, it really flicked the switch for the passion of music for me as a toddler. I was also living in Los Angeles, which is a great advantage. The clubs are out here, the weather is good, you can go and get around, you are not snowbound. You can grow a bit, you are hanging out with your friends in your high school band. It was really a great time to be a Californian kid with a passion for music.

CrypticRock.com – It certainly sounds like it. As mentioned, you have been working alongside Paul McCartney now for the better part of 15 years. In that time, you have been a part of touring and recording a list of studio records with Paul. What has your time working with the legendary Beatle been like?

Brian Ray – As you can imagine, it is a gift that is sort of beyond description. It is a privilege and an honor. I just couldn’t be more fortunate to be able to work with him. The guy is not just a legend, he happens to be worthy of every accolade that he has ever received. I was sitting in a studio with him recently and just watched him reel off take after take, idea after idea. The smallest little detail that he sings, plays, or arranges, and it is all so musical, yet he had no classical musical training, but that means nothing in terms of great talent. He is just astounding, I am continuously impressed by his musicianship, and sense of melody and writing. 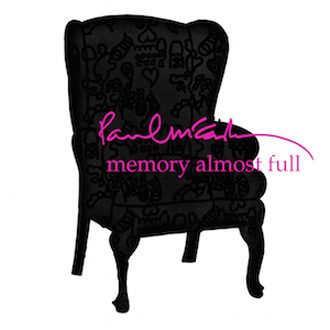 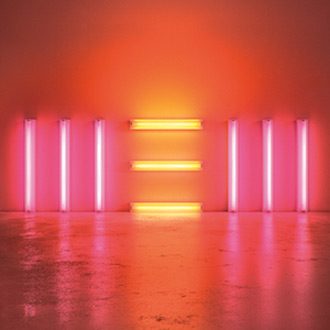 CrypticRock.com – It has to be an amazing experience working with someone like Paul McCartney. Amidst your busy schedule touring with Paul McCartney, you have found the time to put together a couple of solo records. You recently released two new tracks including an original called “Here For You” as well as a cover of Neil Young’s “Cinnamon Girl.” What inspired the recording of these songs?

Brian Ray – The first single of my double-sided single is called “Here For You.” That song was written by me and inspired by my two youngest nephews, James and John. They just blow my mind, they are so lovely, open, and their spirit is so positive, curious, and energetic. Me, I am a little older now. It is as if I get to be re-introduced to my own sort of sense of wonder again through the eyes of these two young boys. The song was written for them in a sort of superhero language.

It imagines these kids as the world’s saviors. It is also offering to them this world of wonder, and reminding them they are amazing, powerful, and really can do whatever they want. It reminds them that they are capable of doing whatever they want and just a strong message giving us hope for the future to have such amazing young spirits in the world.

CrypticRock.com – “Here For You” is really an uplifting piece and there certainly is a lot of craziness going on right now. Do you feel that music can help us unite and hopefully find some common ground on issues?

Brian Ray – Absolutely, it always has. For me, this might be generationally, but music has always been a source of inspiration. I have always looked toward music for more than just the notes. I look to it for social and cultural inspiration. For me it has also been a gift and a speaker for politics and society. 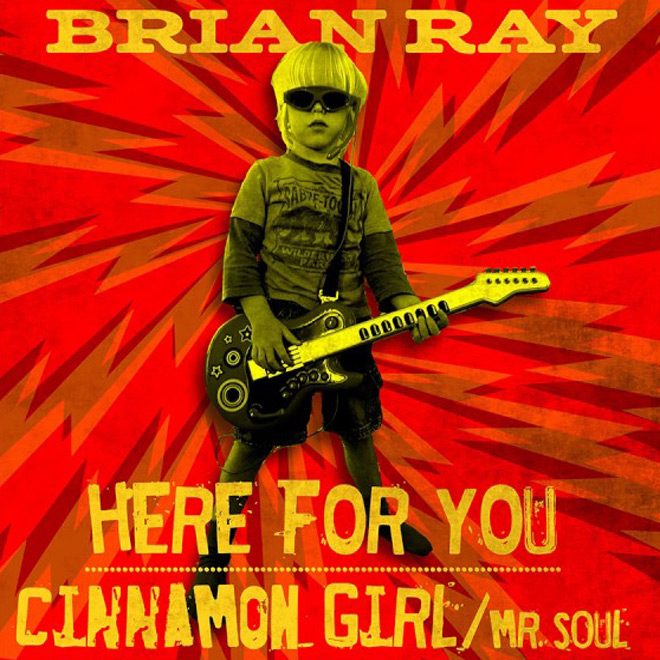 CrypticRock.com – Yes, it certainly is something all generations can relate to. With a busy schedule ahead, can we expect for perhaps an EP or full-length album to evolve from it?

Brian Ray – That is a really good question. I am open-minded to that possibility. I am so lucky to be with Paul and I give him my priority for my scheduling and time. As it is with Paul, I never really know what we are doing the next year until it is right in front of us, to be honest with you. It is hard for me to promise, but I can always say my intention is to do a bunch more.

CrypticRock.com – That is good news. Judging by your past work, you have a diverse sound to your music. That said, if you had the time, what would you like your new material to sound like?

Brian Ray – My roots in music is sort of all over the map. Basically, it is everything that happened between 1965 and 1970. These are my influences, which is early Rock-n-Roll. It is guitar music like Eddie Gray, to Eddie Cochran, to Folk music, to British Invasion, and everything therein, to early Arena Rock. All those things are all arrows in my quiver. I guess I just like to call on whatever inspires me.

At the moment, I am really fired up about British Invasion to American Garage music from ’65 to ’67. I know that is very specific (laughs). There is sort a renegade quality about it, there is some lyric content that is sort of tongue-in-cheek now. The playing of those records is inspiring to me. It is sort of like white guys take on the Rhythm & Blues music that influenced early Rock-n-Roll, and to me it is kind of fun. That is kind of what I am thinking. I am kind of thinking, if I do a new EP, it might be half covers and half new songs, just like my new single. 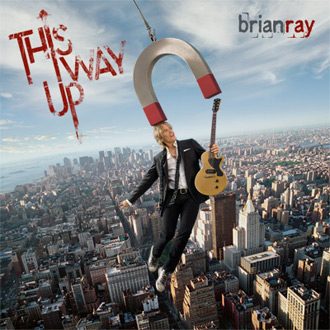 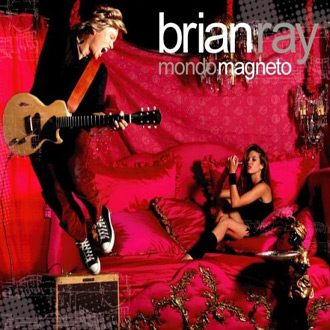 CrypticRock.com – Very cool. You mention a great selection of music. You have The Beatles, The Zombies, The Animals. You could go on and on talking about the great bands that came out of England at the time. There is a lot to be influenced by.

Brian Ray – No doubt about it. I have been listening to the Underground Garage on SiriusXM quite a lot. I have just fallen in love with it after discovering it. I just look up to all those DJs and their vast knowledge. It is so playful and fun. To hear the bands like The English Birds, The Creation, a lot of these bands that we didn’t really get over in America much. To hear it curated at the Underground Garage is really inspiring.

CrypticRock.com – Yes, those are also some great acts. Platforms such as the Underground Garage allow access to all of us for that sort of music.

Brian Ray – Isn’t it great? We live in such a cool era where all this stuff is discoverable now.

CrypticRock.com – Yes, that is the positivity of the internet. My last question for you is pertaining to films. CrypticRock.com covers music and Horror/Sci-Fi films. If you are a fan of the genres, what are some of your favorites?

Brian Ray – Oh man, I remember freaking out over The Blob (1958). I remember getting really scared with Frankenstein (1931), Dracula (1931), The Wolfman (1941). All that stuff of that era, it was earlier than my childhood of course, but nonetheless, I was inspired by all that stuff. Then the cheesier stuff like Plan 9 From Outer Space (1959). There are just too many to name. I like some of the later, kind of funnier versions of that, like Ed Wood (1994) and Mars Attacks (1996). 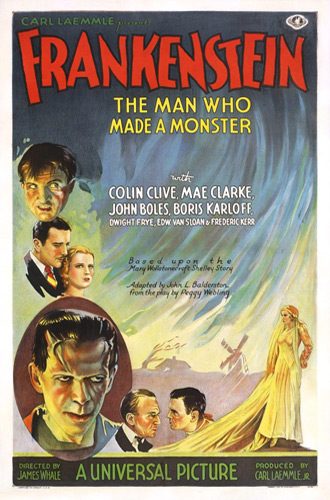 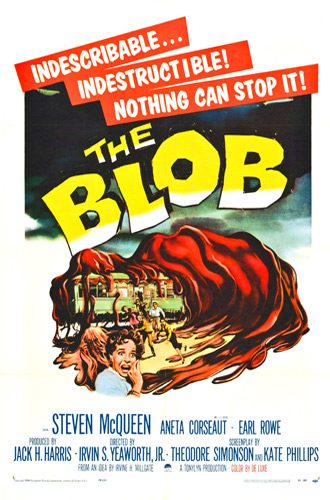