Some dreams never come true, but with perseverance and passion, they can become reality. That could be said for the young actress Brighton Sharbino, who at only six years of age was already landing roles in television and film. Born and raised down in Texas, Brighton comes from a strong support system, including a brother and sister whom also have a knack for acting. With the groundwork laid, fast forward a few years and Brighton found herself portraying the role of Lizzie Samuels in AMC’s The Walking Dead, thus becoming an intricate part of the ever changing plot. Up to the challenge of playing Lizzie, Brighton projects a girl who was fragile, innocent, and harmless, but quickly, the truth of Lizzie rose to the surface, making for perhaps one of the most heartbreaking storylines of The Walking Dead in its six seasons. Recently we sat down with the talented actress to talk about her time on The Walking Dead, her love for acting, future projects, her supportive family, and more.

CrypticRock.com – You began your acting career at a really young age, you were on Barney and Friends back in 2009. Since then, you have gone on to a list of film and television credits in a short period. First, tell us, how did you get into acting?

Brighton Sharbino – The first thing that is really important to do for acting is to go to an acting class. They just help you with your acting and they recommend agencies that send you out for auditions. I have always wanted to do acting.

CrypticRock.com – Excellent. Perhaps your biggest role came when you assumed the role of Lizzie Samuels on The Walking Dead. How did you go about obtaining the role of Lizzy?

Brighton Sharbino – I am from Texas and the agent that submitted for me was Landrum Arts out in Louisiana. The Walking Dead shoots in Atlanta so they just sent it out, I auditioned for it, got a call back, and I luckily booked it. 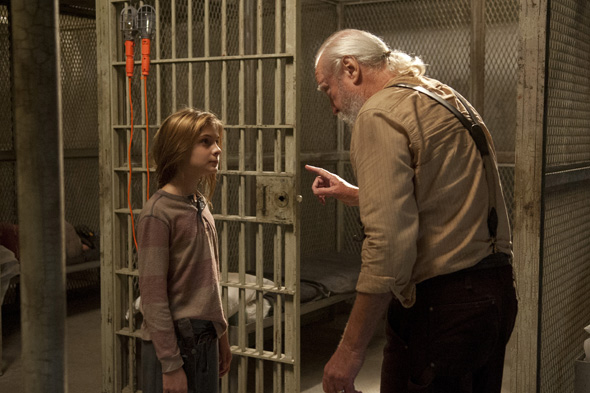 CrypticRock.com – That is pretty cool and seems to happened relatively easily. Were you excited to land this role on the show?

Brighton Sharbino – Oh definitely, and it was super cool that I was doing it with Kyla Kenedy because she had actually been my friend since I was eight years old.

CrypticRock.com – Wonderful to hear. Your time on the show certainly made an impact. Now, the character Lizzy, clearly she was not mentally well. At first, the audience saw her as this innocent, fragile girl, but there was more than meets the eye. Quickly, people saw that as her character progressed. What was it like for you to portray Lizzy?

Brighton Sharbino – It was a lot of fun, especially because there are not very many crazy characters for young girls. I think that her character, the thing that was so twisted and so heartbreaking about her was that she had good intentions. She did not want to see them as bad, but shaking down the boundaries between good and bad can lead you to doing bad things because she did not see bad. It is what led her to the darkness. That is what was so heartbreaking. 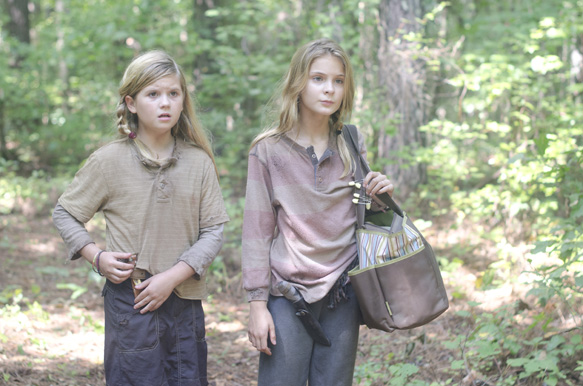 CrypticRock.com – It certainly was. Lizzie definitely a tragic character and you did an excellent job portraying her. Obviously, her demise was pretty shocking to audiences, when they saw what happened to her. What was it like filming that final scene for you? Was it uncomfortable for you at all?

Brighton Sharbino – It was sad that I would be leaving the cast and crew. I think that the way that it happened was so awesome. I love to do dramatic scenes so I did have a lot of fun shooting it, of course. 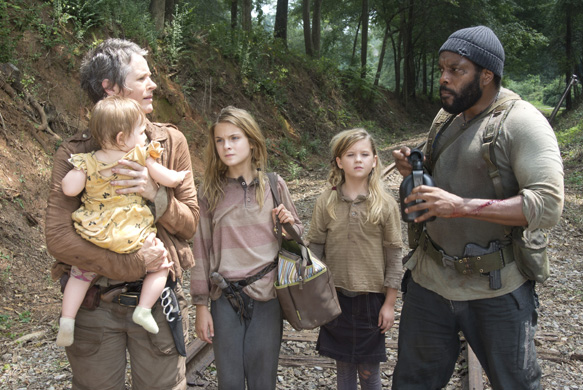 CrypticRock.com – That is good that you were up for the challenge. Yourself and Melissa McBride, who plays Carol, had a very good connection as characters. What was it like working with Melissa?

CrypticRock.com – That is great, and you can definitely see the chemistry of the both of you together. You are still very young and you have already done some really great things in film and television. Do you feel like you are prepared to move forward in the future as a professional actress full-time.

Brighton Sharbino – I definitely want to. I just shot a movie actually, it is called Miracles from Heaven with Jennifer Garner, Queen Latifah, and Martin Henderson. I am super excited about it. It comes out March 18th.

CrypticRock.com – Excellent, what is this new film about?

Brighton Sharbino – It is faith based. It is about a little girl with an incurable disease. She falls down the hollow of a tree and she survives. It is about the family’s journey. 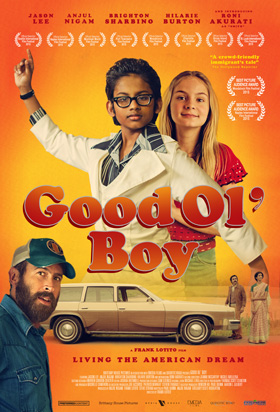 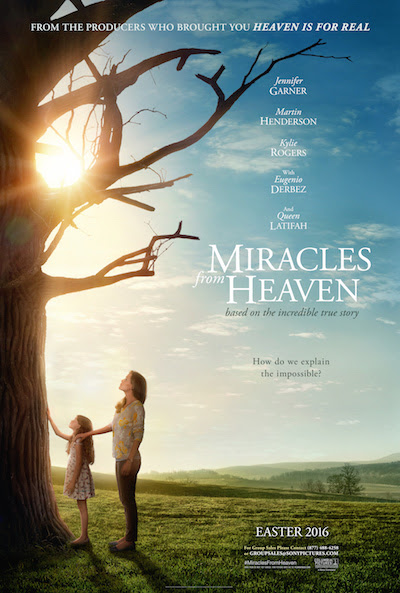 CrypticRock.com – Interesting. It is nice to hear you have jobs lined up and are continuing to grow as an actress. Obviously, one can imagine being a young actress can be intimidating at times. You are still going to school and you have your friends, etc. With that said, do you have a good support system that helps you balance everything out?

Brighton Sharbino – Oh definitely. My family supported me so much, I am so grateful that I have them.

CrypticRock.com – Well that is extremely important positive. How do your friends treat you now that you had such a big impact starring on The Walking Dead?

Brighton Sharbino – The exact same, they do not see me any differently (laughs). 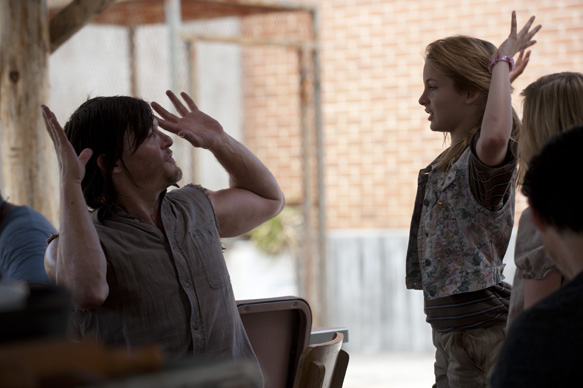 CrypticRock.com – That is good, one can imagine they still tease you, just like friends are suppose. Besides The Walking Dead, in 2014 you actually been on Once Upon a Time as a Young Ingrid. What was this experience like for you?

Brighton Sharbino – It was very different from shooting The Walking Dead and I loved it cause I got to be a princess. In The Walking Dead they would put dirt on me. They put extensions on me, were fixing my hair, and let me wear a princess dress, it was really fun to do. It was a dream.

CrypticRock.com – Well that is good that you had too dramatically different roles to play with. As stated, your time on Once Upon a Time was brief, but it was fun to see you on that series as well. Do you see yourself possibly doing more television series like that in the future?

Brighton Sharbino – Hopefully, yeah. I love acting. I want to do it forever.

CrypticRock.com – Nice to see you have such a passion for it. Do you have any other interests such music or anything like that?

Brighton Sharbino – I like piano and I actually do Parkour classes with my little brother, which is actually really fun. I love it.

CrypticRock.com – Wow, that is pretty cool. So you do have an interest in music then. Do you play any instruments?

Brighton Sharbino – Yes I do, I play the piano.

CrypticRock.com – Excellent to hear that. Do you have any other projects coming up besides Miracles from Heaven?

Brighton Sharbino – Right now I just have Miracles from Heaven.

CrypticRock.com – Well that will be something to look forward to. My last question was pertaining to movies. CrypticRock.com covers music and movies. I am interested if you are a fan of Horror movies, do you have any favorites?

Brighton Sharbino – I guess I like Horror movies. I get scared very easily, but yes, I can stand them. One of my favorites is the Poltergeist remake from this year which my sister Saxon who played Kendra Bowen.

CrypticRock.com – Fantastic many people enjoyed that new edition of Poltergeist. Are there any others that you enjoy?

Brighton Sharbino – Horror movies, I kind of rather the ones about real life than the spiritual ones cause it kind of scares me when it is like this spirit thing that you cannot see. It feels like, I do not think I can fight it if I cannot see it. Like a kidnapper or something, it is like yes, I could actually have a chance.

CrypticRock.com – Right, so something that is more realistic is not as frightening because it is real opposed to the unknown. Have you ever seen The Exorcist (1973)? If you are frightened easily, do not see it.