Nearly everyone has fond childhood memories of staying up past their bedtime, diving into a bowl of popcorn, and being scared out of their wits with a good old fashion Horror flick. These type of things simply never seem to fade from the forefront of our minds, and helping them remain fresh is the iconic Horror host Elvira.

Affectionately known as Elvira, Mistress of the Dark, the character rose from the crypt at the dawn of the ’80s, soon becoming a sexy, pinup-like Gothic girl dressed in black while dishing out a morbidly delightful sense of humor. An endearing character portrayed by the talented Cassandra Peterson, Elvira remains a fixture in Pop culture three-plus decades later. Recently we caught up with the busy Peterson to talk the origins of Elvira, her new clothing/jewelry line, plans for the 30th anniversary of 1988’s Elvira: Mistress of the Dark, and of course, Horror movies.

CrypticRock.com – You have been involved in entertainment now for nearly five decades: from television to film, you have built an impressive legacy. First, briefly tell us what inspired your interest in the entertainment world?

Cassandra Peterson – Probably being the center of attention! I think my parents put me up on a table to dance when I was 3 years old. People clapped and threw money at me and I thought, “This is a fantastic gig!” They are still doing that! Well, they are not throwing money at me, but I wish they would (laughs). Being a kid, I just got this bug about being the center of attention.

As I got older, I went into tap dancing lessons, modern Jazz lessons, then, later on, singing lessons. I was really bitten by the show business bug, it was something I always wanted to do. I started at 14 dancing in night clubs and kind of just continued on from there. I didn’t know what I wanted to be exactly, but I knew I wanted to be, like I said, the center of attention.

CrypticRock.com – You have certainly done a great  job in your career in entertainment. Of your work, perhaps your most famous is the iconic character Elvira. Synonymous with Horror cinema, Elvira has become a fixture over the past thirty-something years. What inspired the character of Elvira and the development?

Cassandra Peterson – I heard about a job for Horror hosting. I really didn’t know what a Horror host was. I was way into the Horror genre and I always have been, even as a pretty young child. When I heard it was about Horror movies, I didn’t know what I would be doing but I thought it might be a good gig at a local television station. I was here in Hollywood going on acting interviews; I was in the The Groundlings Comedy improv group.

When I went into the audition, I went in looking like myself – but I did try to improvise and be funny – even though the script leaned more toward spooky. I got the part, and when I got the part it was all of sudden – come up with a look, a character, an outfit. I asked my best friend at the time, who is an artist, to help sketch-out some drawings of something I could look like. We came up with several things and the station picked one. It was kind of an ’80s twist on a typical sexy vampiress. Next thing I knew we were on TV and people were really digging it! 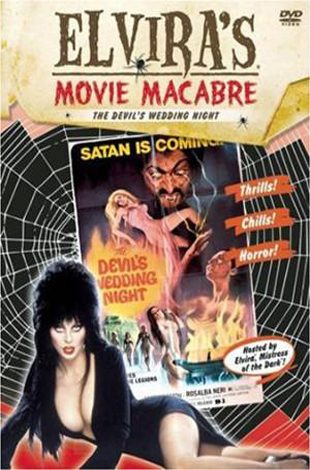 CrypticRock.com – Well the character of Elvira has certainly engraved herself in the fabric of Pop culture. The character’s personality has always been sarcastic and enduring. Was it something that grew naturally as time went on?

Cassandra Peterson – It did. We weren’t really sure where to go with it. The director at the time, a man named Larry Thomas – a kind of funny old sense of humor, kind of a Shecky Green sense of humor – was writing the jokes with my help. I asked if one of the members of The Groundlings, John Paragon, could maybe come in and help out because we had so much to do; we didn’t have enough time to do everything. John joined the team and he was really writing some funny material. He and I would watch the movies every week, come up with the jokes, and he would put it together in a script. John is a brilliant comedian: he wrote and directed Pee Wee’s Playhouse, he also played the characters of Jambi the Genie and Pterri on the show. He and I wrote everything together for 21 years, including the movie Elvira: Mistress of the Dark (1988).

John coming on definitely made the character go in a more comedic direction. That was my background: for the previous 4 1/2 years I had been in The Groundlings doing comedy improv, so that is what I was into. That is why the character kept going more and more toward the comedy direction, but of course keeping the spooky element there. After all, we were hosting Horror movies!

CrypticRock.com – It all worked exceptionally well. The character took on a life of its own going on to full-length features. You have kept quite busy in recent years with the 13 Nights of Elvira series in 2014, a new comic, and most recently a clothing and jewelry collection. How did this new project come about?

Cassandra Peterson – Yes! I just launched my new clothing line with Pinup Girl Clothing and my jewelry line from Sweet Romance at the same time. Both of those people came to me asking to do something inspired by the Elvira look. I am thrilled to finally do that! What they came up with is awesome. I have been wearing Pinup Girl Clothing for a long time – it is really sexy, has a vintage look, and looks great on any kind of body. I loved their stuff to begin with by their Designer Laura Byrnes. So they came up with that.

Then the jewelry people make really beautiful sort of high end jewelry. It is made in the USA and fabricated really beautifully. They are doing this whole line of “Inspired by Elvira jewelry,” as well as the jewelry I actually wear as Elvira – the magic ruby rings, the snake earrings, and a few of those different things. I am very thrilled and happy this all came together at the same time. I wear the jewelry and clothing all the time, whether I am myself or Elvira. People can find a lot more about this on Elvira.com if they want to check it out. 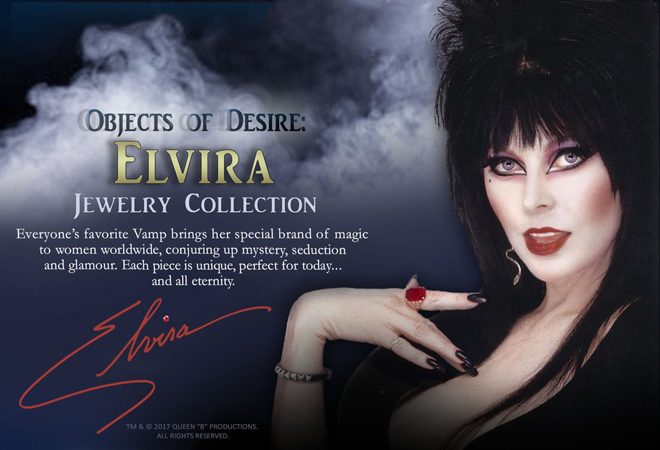 CrypticRock.com – Excellent. Beyond that, you do make appearances regularly including some for the Halloween season. You have been working with Knott’s Berry Farm for some time now. For those coming out, what can they expect from the event?

Cassandra Peterson – This year is going to be my last year at Knott’s Berry Farm. I started in 1982 doing their Halloween event, Knott’s Scary Farm. It is the largest Halloween event in the world; it has been around the longest and it is the largest. I have been performing there, on and off, for 30 something years.

I have decided that this is going to be my last year doing it. It is a huge production: it is singing, dancing, and jokes. This year is going to be an homage to my movie Elvira: Mistress of the Dark, which a lot of fans are familiar with. I thought going out, my last show, I would give the really hardcore fans what they want.

CrypticRock.com – That sounds exciting and that is good timing considering Elvira: Mistress of the Dark will celebrate 30 years in 2018.

Cassandra Peterson – That is right! We have a lot of really fun things planned for that. I can’t get into them yet. I don’t want to tip it off, but yes, next year we have some great things planned for celebrating 30 years of Elvira: Mistress of the Dark. 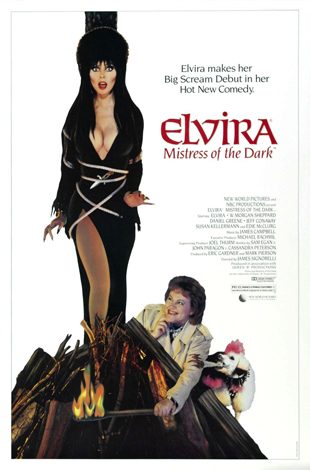 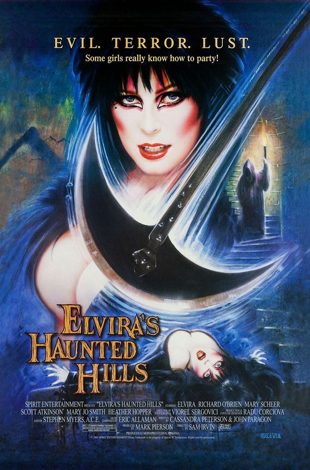 CrypticRock.com – That will be something to look forward to. Elvira clearly has a love for the macabre. For you personally, what are some of your favorite Horror movies?

Cassandra Peterson – I tend to gravitate toward the older vintage ones, the ones I grew up with as a kid. I just love them, they are kind of like comfort food to me; the 1950s and 1960s films. Some of them are kind of laughable, but some of them are really great. One of them is Night of the Living Dead (1968). I can’t get enough of that movie and I can’t watch it enough times. It was brilliant! It is sad George Romero recently passed away, I knew him and met him many times.

I also love the more campy stuff like The Killer Shrews (1959). I even get into the Godzilla and Mothra thing; I love the old Japanese films. That whole genre just fascinates me; I just can’t get enough of watching it! I guess it is a childhood thing. It goes back to when you are a kid, and a film that had a huge impact on me was House on Haunted Hill (1959) starring Vincent Price. That kind of changed my life and got me into the Horror genre. That was the first movie I saw where I went, “Oh my god! What is this? I love this! I need more!” I had to see everything Vincent Price ever did after that. I couldn’t wait for his next film. 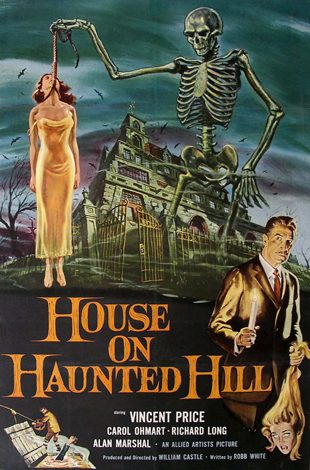 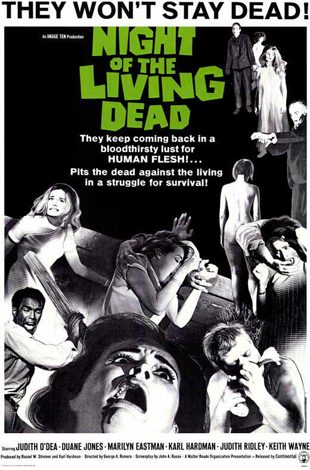 Make your film collection a little more spooky with Elvira: