Did anyone ever think the day would come that a series based around zombies would become the most popular show on television? A Horror hound’s fantasy come true, AMC’s The Walking Dead has quickly become an international phenomena based around a post-apocalyptic world filled with zombies and equally as dangerous living beings. Centered around a close knit group of survivors, one of the key characters who has grown with the show has to be Carl Grimes, played by Chandler Riggs. Beginning his time on the set of the series at just ten years of age, Riggs has grown into a young man before viewers’ very eyes on and off screen. As a mainstay on the series, and fan-favorite, Riggs is one of the biggest teenage stars in Hollywood. Recently we sat down with Riggs for a personal look at his time on The Walking Dead, his relationships with the rest of the cast, aspirations for the future, and much more.

CrypticRock.com – You have had quite an amazing run the past five years with the success of The Walking Dead.  You began your role as Carl at the age of ten years old and as Carl has grown in the series you have also grown as a person as well.  Tell us a little bit about what it has been like growing up on The Walking Dead?

Chandler Riggs –  It has been a really crazy experience but it has been fun. The actors are my best friends now and I go to work and shoot things all day, so it has been a pretty awesome experience. 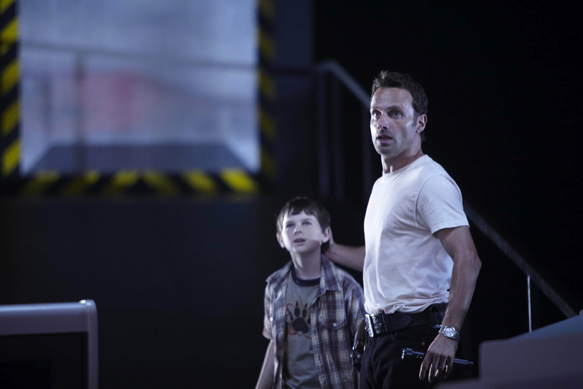 CrypticRock.com – One can imagine so.  Now the role of Carl has developed drastically over the years.  You went from a little kid to having to grow up awful fast due to the circumstances of the world around you in the series.  How do you feel about the development of Carl’s character?

CrypticRock.com – Yes, the viewers are really enjoying watching your character as Carl grow over the series and you have actually become one of the fan favorites now. 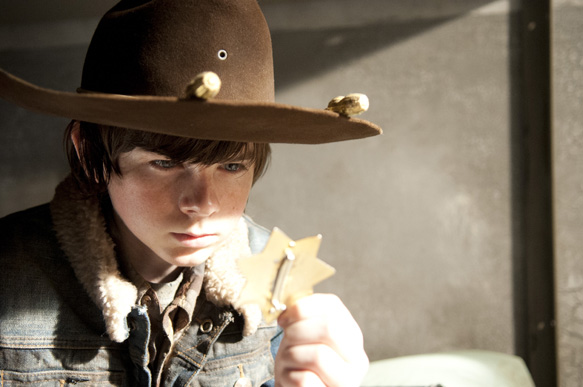 CrypticRock.com – One can imagine, no matter what age you are, that being on a massively popular series like The Walking Dead could change your life.  Being that you are now fifteen and in high school, how do you manage the success of the show and balance it with your friends, family and everyday life?

Chandler Riggs – Basically, I have had the same friends that I have had my whole life. People that I have know for a long time and my friends are there to treat me like garbage and keep me humble (laughs), so it is awesome. My family is really supportive of me in what I am doing and how I am managing school and work at the same time.

CrypticRock.com – Do you ever feel at all overwhelmed or do you feel that you have that good support from your family that keeps you balanced?

Chandler Riggs – I think it is mostly my family that helps keep me balanced.____ 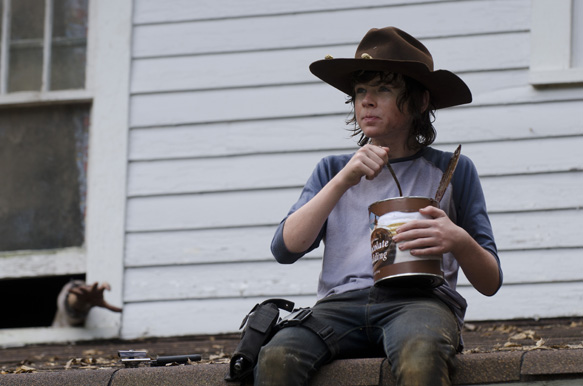 CrypticRock.com – That is very good to hear. There seems to be an extremely great chemistry between all the actors on the set of The Walking Dead.  How would you describe the working environment with your fellow show stars and have you developed friendships off the set?

Chandler Riggs – Well, I have known Andrew Lincoln for five years now, and the rest of the cast not as long, so I am definitely closest to Andy. All the other characters are awesome and so much fun to work with. It is awesome to get to work with all these amazing actors and to develop friendships with them and learn from them. It is pretty cool.

CrypticRock.com – Now, as you said, there has definitely been some characters that have come and gone on the series, but there are the mainstays, such as yourself and Andy. Do you feel that the friendships that you have developed on the set, as far as making the series, has helped you as far as comfort level as an actor?

Chandler Riggs – For sure. As an actor, when you do a scene with another actor, it is you playing off of the other actor’s emotions and what they are doing; the better the friendship is, the easier it is to understand them and play off of them.

CrypticRock.com – Right, of course, and that is what makes for a more interesting show because the reactions seem very genuine and very real. That is a sign of a good actor and/or actress obviously. In many instances, when it comes to a special effect, sometime the special effect artists would keep the actors in the dark so when the scene actually happens they would have a really horrific and natural reaction to it. Are you told that these things are going to happen or do they kind of keep you in the dark so that you have more of a horrified reaction sometimes? 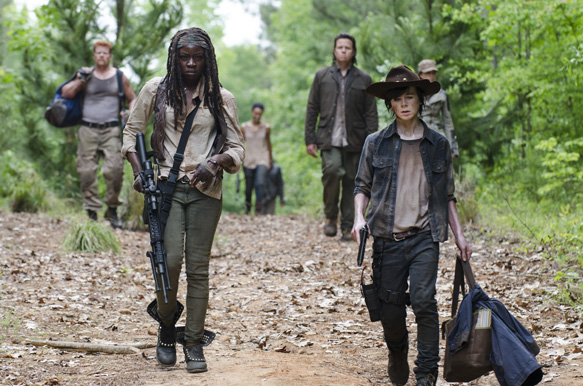 CrypticRock.com – Now the premiere of Season five, No Sanctuary, was perhaps one of the most fulfilling openings to a season in the series run thus far.  How exciting was it for you and everyone else to bring this spectacular episode the fans?

Chandler Riggs – It was so exciting to see what all the fans thought and what was going to happen with the future of the show.  We were filming for the next season before they even aired the first episode of this season. I just saw that we have seventeen million people in the U.K. that watch the show; it is crazy, the popularity of the show. I am excited for the reason of the season, to see what happens and what viewers think of it.

CrypticRock.com – Yes, and like you said, it was an overwhelming response to that opening episode and it has been interesting to watch the season unfold as we go into the mid-season finale.  Now, fans are well aware that Carl had been extremely at odds with his dad, Rick, over the course of the past few seasons.  Do you feel like Carl has finally coming to terms with his dad?

Chandler Riggs – I think he did in episode nine of season four, because he thought he could go out on his own, and he did not need his dad, obviously he could not.  He was fine with him before that, but up until the prison, he blamed Rick for everything. I think that he is on good terms with his dad now.

CrypticRock.com – Yes, agreed, and that is one of those things, that obviously it is a show and it is fantasy based, but that is a reality of any kid with their dad.  It seems it is very real, and as mentioned, the show is not reality but there can be a lot of things that can be drawn from the show that can be taken in to reality. A lot of the joy that people find from it is that they think, “What if I was in this horrific situation, how would I react?”  Do you find yourself taking away aspects of the show, as far as the reactions and the situations, and applying it your everyday life now?

Chandler Riggs – Exactly it is a natural reaction for a father and son.  As far as the show, I do not find trouble taking the differences in taking the show and separating it from reality.  I do not have any problems with that because we do not stay in character the whole time we are on set. We mess around and stuff when we are done. 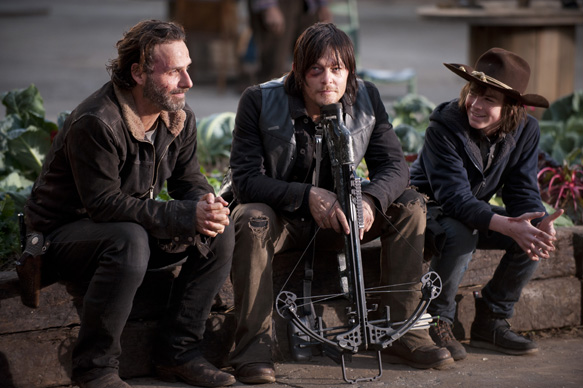 CrypticRock.com – Right, that is a good thing.  The show teaches a deeper message of mortality and that obviously we are not all going to be here forever. Does it change your perspective and almost appreciate the life you have more to know, hey we as living human beings have a good life here.

CrypticRock.com – The Walking Dead definitely has been amazing and everyone hopes it continues to air for a long time, but what are some your aspirations as an actor and artist after the series is complete? Where would you like to go from there?

Chandler Riggs – I hope to go to college for acting; go to UCLA or NYU or Juilliard and then continue acting.

CrypticRock.com – That is great that you want to continue acting. Sometimes a lot of younger actors step away from acting.  Many actors/actresses currently starring in The Walking Dead do not seem to be involved in many other projects while the show is being produced.  Is this a contractual obligation with AMC or is it simply a case of the cast wants to strictly focus all their attention to the show?

Chandler Riggs – I think that it is more that people just want time off to spend time with their families, but I have done a couple of other movies during off time in the past couple of years, such as Mercy.   Norman Reedus has done a few films and a voice over for the new Silent Hill video game coming out in 2015. We are not obligated to anything, we are left free; I think the actors just want to rest for a while until another seven months on the show. 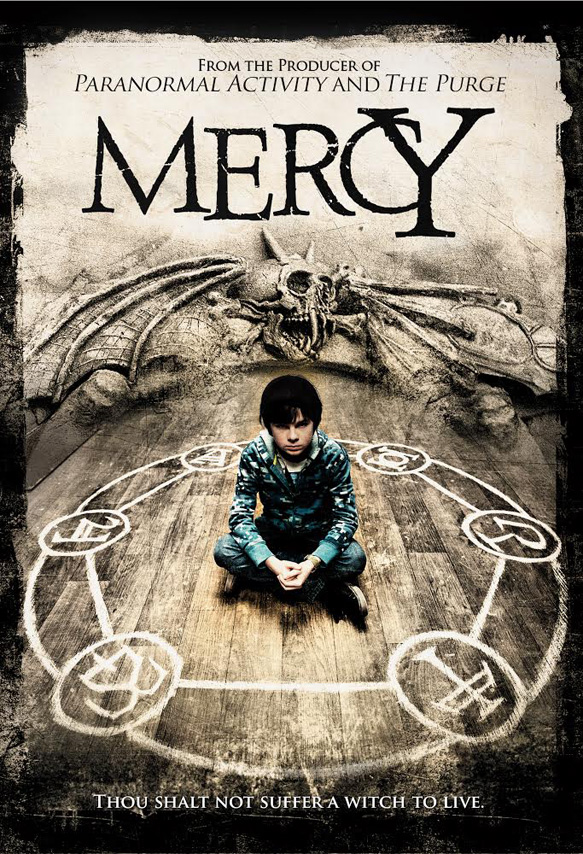 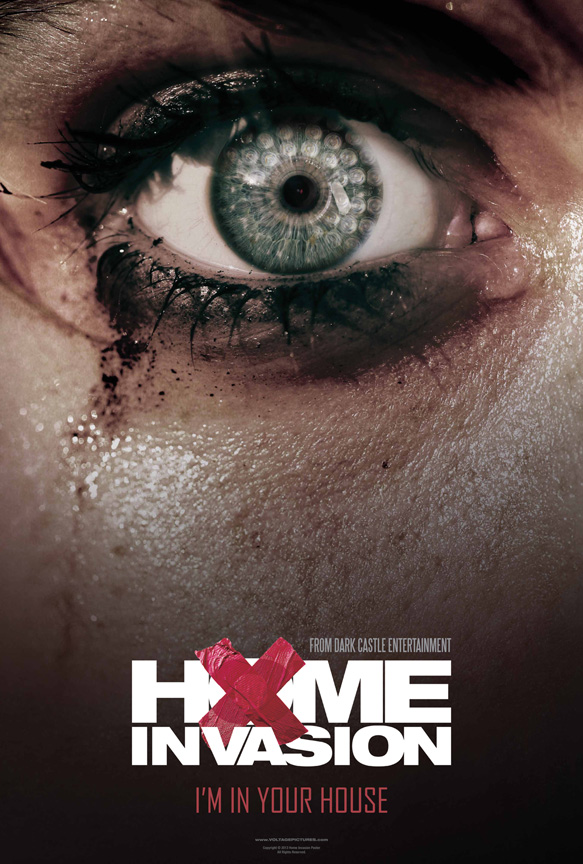 Chandler Riggs – It is not that bad. I like going to shoot and being all bloody and shooting things, it is fun. It is sad to stop filming, but at the same time I get to rest, go to school, and finish out the rest of the year.

CrypticRock.com – Did you happen to see the sequel to The Conjuring, Annabelle,  that they just came out with?

CrytpicRock.com –  It seems you have an interest in possession films.  Have you ever seen The Exorcist (1973) before?

Chandler Riggs – I have not seen it all the way through, but I wanted to (laughs).