Known as The Voice of Rock, a singer, bassist, and songwriter, Glenn Hughes has most certainly lived up to such a name. Famously known for his tenure a part of Deep Purple in the late ’70s, Hughes has also had stints fronting Black Sabbath, among many other bands through the years. Accumulating an impressive solo career of touring and studio albums, including 2016’s Resonate, Hughes has lived the wildest Rock-n-Roll, found sobriety, and is perhaps the most gracious musician this side of the moon telling the tale.

CrypticRock.com – You have been involved in Rock-n-Roll for over five decades. From your time with Deep Purple to a great solo career, and beyond, how would you describe your journey in music?

Glenn Hughes – It has definitely been a journey. I started out playing the trombone, I was named after Glenn Miller. I started out reading music from a trombone, then The Beatles came along, and the rest is history. From all of the things I’ve done, pre-Deep Purple to post-Deep Purple, to my private life, to the endeavors of learning how to live appropriately and inappropriately, to carrying the message of love, faith, and hope to people across the planet.

CrypticRock.com – It certainly has been a wonderful career. Of course there has been ups and downs, but that leads us to present day.

Glenn Hughes – You know, I want to say that all the things that happened to me in my life that were not so good, made me the man I am today. I have persevered and learned. I am a student of life and music. I am a student of continuation on this journey and being eternally grateful.  My job is to carry the message that music is the healer and love is the answer.

That may sound a little bit corny or a little hippy to most people, but I’ve been there and got the t-shirt. I have a lot of love and faith from my fans. People who have followed me, people who were there when I didn’t know it when I was a little bit loopy. I am one of the guys you will speak to that is full of gratitude, and if I may say so, in fine voice in order to give back to those who want to hear it.

CrypticRock.com – That is great to hear! It is said when you joined up with Deep Purple you had considered yourself more a vocalist than a bassist. You would go on to be a part of the band for three years. What was that time like for you?

Glenn Hughes – It was very active. We recorded three studio and two live albums. We did two live albums in North America in very successful stadiums, arenas, etc. There was no stone unturned. It was a wild, glorious, freaky ride – the girls, booze, the drugs, the mishaps, the cavorting, the frivolity, the circus animals – it was all wild and wonderful. It was incredible.

CrypticRock.com – Wow, it sounds like a crazy time. Following your time with Deep Purple, you would go on to release several solo albums, as well as work with the likes of others such as Black Sabbath. Seeing your vast experience through the years, how would you compare working solo opposed to a part of a band?

Glenn Hughes – Personally, I like to be solo. You ask me a question, I am going to be honest with you. I am a writer and producer as well, this is common knowledge to most people. I have a certain way I like to work and write.

Let’s take for instance Black Country Communion, the band I’m in with my dear friend Joe Bonamassa. When we record, Joe comes over to my house and we write together – it’s a great relationship with just the two of us. Being in a band of four or five people, where you’re all trying to pony up and do all the work together in one room, is slightly different.

Do I like to work alone? Yea, I think I do. Although my current tour is Glenn Hughes performs classic hits of Deep Purple live, it is still the band’s sound. To answer your question, I prefer to work alone and have great people around me.

CrypticRock.com – That is understandable. Speaking of solo albums, in 2016 you put out a killer album, entitled Resonate. What was it like putting that record together?

Glenn Hughes – I got a call from my record company asking if I would like to make a record. I said, “Let me get back to you in three months.” I went home and wrote all those songs in two months, and I said, “I’m ready to go!”

We went into the studio in the summer of 2016 and released the album at the end of the year. I was very happy with Resonate. It was handwritten in my home studio and then I went to Copenhagen with my band, and of course my best friend Chad Smith from Red Hot Chili Peppers was there to be my cohort and dear brother.

CrypticRock.com – The end result is great, Resonate is a must listen.

Glenn Hughes – I am very happy with it. A lot of people would love to see me do more solo shows and that will resume in a couple of years. At this time, I am dedicating the craft to Glenn Hughes performs classic Deep Purple live.

CrypticRock.com –Yes, and you have been busy visiting places around the world on this tour. How has the tour been going thus far?

Glenn Hughes – We’ve done a handful of shows and the audience has been more than incredible. I am so amazed that so many people know these songs that, as you know, were written in the mid-70s. They are classic.

I was lucky enough to be both for a minute in Black Sabbath and Deep Purple. I’m from that era. I actually walked the streets with guys in The Who, Led Zeppelin, Deep Purple, and Pink Floyd. We are all just buddies, and I am one of the guys who lived to tell the tale.

CrypticRock.com – There are plenty of stories to tell. This tour extends through the end of September in the USA before you take it over to Europe. The show format is not really the studio versions of the Deep Purple songs, correct?

Glenn Hughes – No. Some of it probably needs to be, but most of it is taking from live audio/video files that I’ve had in storage from the mid-70s. I thought, what would it be like to create these monsters to have some aggression, angst, and some freeform. Keeping the melody of the song and arrangement, but having some angst, fire, and flying by the seat of your pants. That is what Deep Purple was all about. We were a dangerous band. I think what I’m bringing to the stage, isn’t tied up in a pink little bow, it’s not going to be a pretty event.

CrypticRock.com – That is what it’s all about. That is what makes it exciting. Rock-n-Roll is supposed to be raw.

Glenn Hughes – Rock-n-Roll has become anything but that in the last ten years. It has become digitized, sterilized, milk toast, too soft. My thing is very raw, very angsty, and wirey. There is no Wizard of Oz behind the curtain here, there is one guy singing here. There are no tapes, it’s just a bunch of dudes playing those songs.

CrypticRock.com – That is what connects with listeners. You seem to be keeping yourself very busy with this Deep Purple tour, plus you have Black Country Communion. So what is next after this tour?

Glenn Hughes – Honestly, you have to try and believe this, I live 24 hours. I shoot for midnight. One of my guys has to tell me, “Hey, this is what we’re doing tomorrow.” All I care about is doing what I have to do today and that everybody that comes to see me had a good night.

What happens next for me is I am doing this tour that will go at least to the end of 2019, maybe into 2020. We will see what happens then. I have things lined up to do with other people, I can’t tell you what that is right now, but it will come to fruition in the next six months.

CrypticRock.com – That is exciting to hear. It is also very inspiring to see how much energy and passion you have for Rock-n-Roll. We change, sometimes our passions change. What do you attribute to continued passion?

Glenn Hughes – I had open heart surgery five years ago. I’ve had two new knees put it. I’ve had a life-changing spiritual condition, I am spiritually inclined. I am an exercise nut – I don’t smoke, drink, or do drugs, I am a vegan. I love animals, I have a lovely wife. I live an inside job kind of life, I am not concerned about material things, if you will. I enjoy what I do.

CrypticRock.com – It is fantastic to hear your healthy and things are going well. What more can you ask for?

Glenn Hughes – I have a lot going on and I will continue!

CrypticRock.com – That is wonderful to hear. As a vocalist, many would say you have one of the strongest vocals in Rock. What are some of your personal influences?

Glenn Hughes – All my influences come from Detroit. My friend Stevie Wonder, I’ve known him since 1975. All my influence came from America. As all you Americans love the English, we English love Americans, and I am American now as you know.

A lot of my peer group love the Blues and I am a Soul fanatic. I made my name as a Rock guy, but a lot of my influences and attributes come from Detroit.

CrypticRock.com – Anyone who is a student of Rock-n-Roll, understand the roots are based in Blues, Soul, and R&B.

CrypticRock.com – That was a legendary period for Rock-n-Roll music. Last question. We also cover Horror and Sci-Fi films on CrypticRock. If you are a fan of either or both genres, do you have any favorites?

Glenn Hughes – I like the Hammer Films of course, I am a Hammer Films freak. I grew up as a preteen watching those films. Here is a bit of a insight for you, Linda Blair, from The Exorcist (1973), was my girlfriend, so that was a big film for me. Of course the American Horror movies since then have been fantastic. I love the Paranormal Activity movies, the first two were brilliant. The Friday the 13th, Saw, and Hostel films didn’t do it for me though. 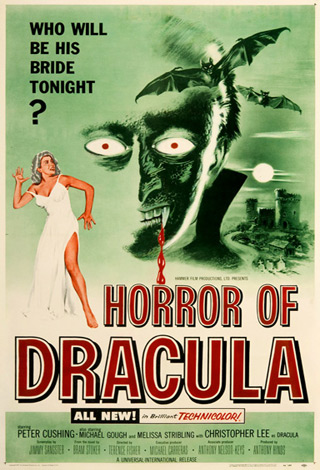