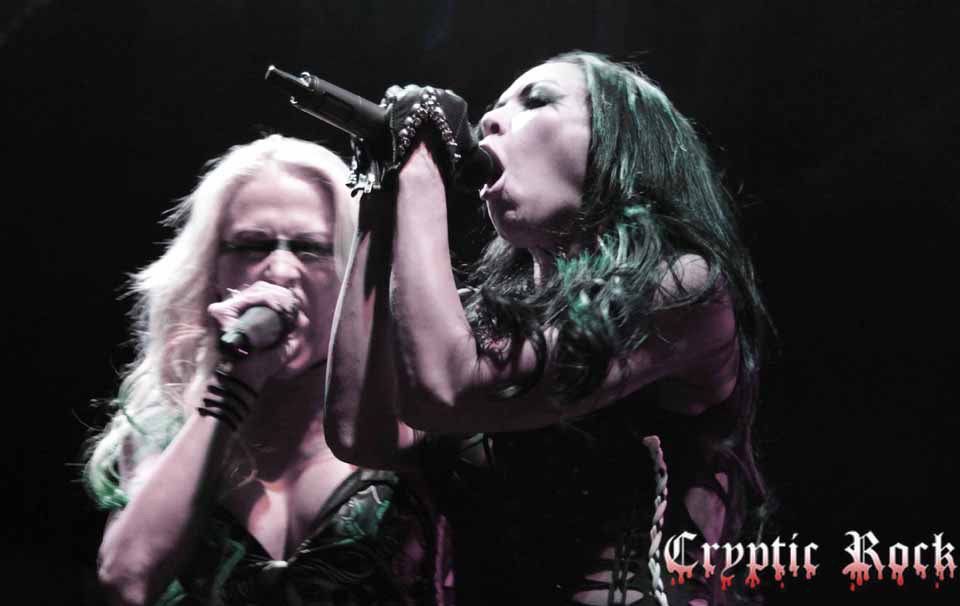 Persistence and defiance through music is the weapon Los Angeles based band Butcher Babies has chosen in their battle to conquer the metal world. Armed with drive and determination to make their dreams a reality, Butcher Babies has been labeled by many as the hottest band in metal. With a breakout year in 2013, highlighted by the release of their blistering debut Goliath and successful run on Mayhem Festival, 2014 shows no signs of slowing down for this 5-piece outfit. With key slots on some of the biggest tours in North America, Butcher Babies now look to bring their wrath overseas to embark on their biggest European tour yet. Recently we sat down with lead vocalists Heidi Shepherd and Carla Harvey about the roller-coaster ride the band has been on, friendship, life experiences, and much more.

CrypticRock.com – A lot has happened for Butcher Babies since we last spoke. Last year was a crazy year for the band with a run on the Mayhem Festival, a tour with Danzig, a tour with Marilyn Manson, and you released your debut album Goliath. Looking back on 2013 how would you describe the year?

Carla Harvey – Well I think you said it best, it was just crazy. It was insane, we saw a lot of our dreams come true. It was a feeling unlike anything else. We saw our debut album, something we had been working towards for four years, come out and tour with legends like Danzig, Marilyn Manson, Rob Zombie, and everyone else on the Mayhem Festival. It was just an unbelievable year for us.

Heidi Shepherd – It’s crazy, starting the year off with Manson, then recording and releasing the album, and as Carla said all the incredible bands we toured with. I have said this so many times since the end of 2013, that was the year that I have been building my life for. Everything we had dreamed of from age 8 to now has been building up to that year. I just hope that 2014 can give 2013 a kick in the ass (laughs). 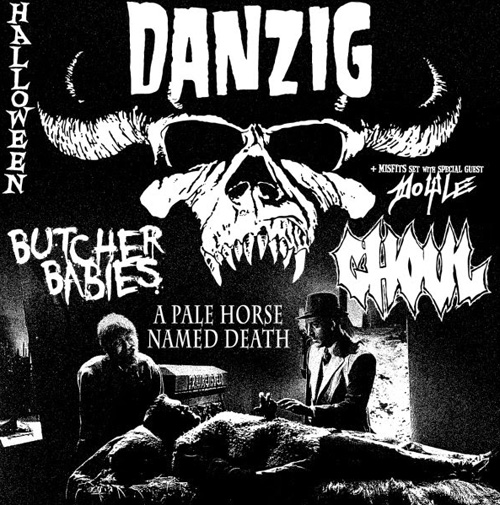 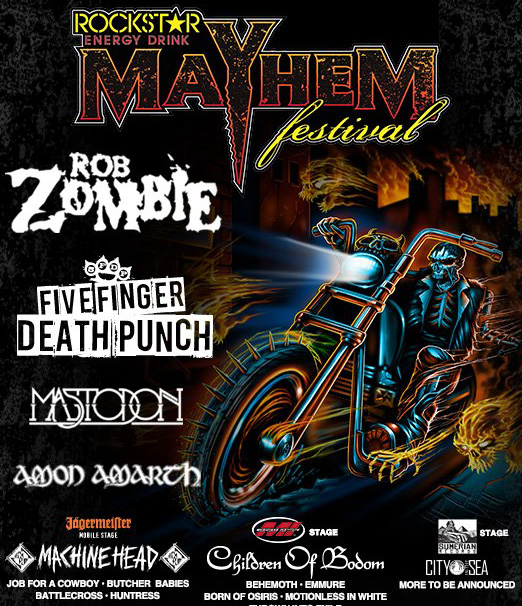 CrypticRock.com – Yes, it was definitely a great year for you the band and here’s to a better year. Now that you have been through a few touring cycles in the past 2 years touring with a bunch of different style bands, what are the biggest things you have learned with these experiences?

Heidi Shepherd – I think for me personally, we have all learned who our true friends are, but one thing we have definitely learned is about each other and how much we all mean to each other. This band has been together for over 4 years now, we are a unit and have had the same members the entire time. One thing we have learned is we definitely can’t do this without each other. You never know when you first start something, especially with people you have just met or just known throughout the scene, where it will take you and what kind of relationships you will build with them. We really have the perfect team. I think that is one thing that has become very prevalent over the past 4 years.

Carla Harvey – Our lives are changing very fast and sometimes it’s kind of hard to know even who to trust at times, we have to have each other’s backs. Also being on the road we have learned, from the people we have toured with, how to behave as you grow as an artist. We have learned how not to be and how to be from the people we have been on the road with.

Heidi Shepherd – We’ve toured with acts like Maria Brink and she is the biggest sweetheart and the biggest supporter regardless of her success. It’s nice meeting your idols that are actually level-headed and smart. 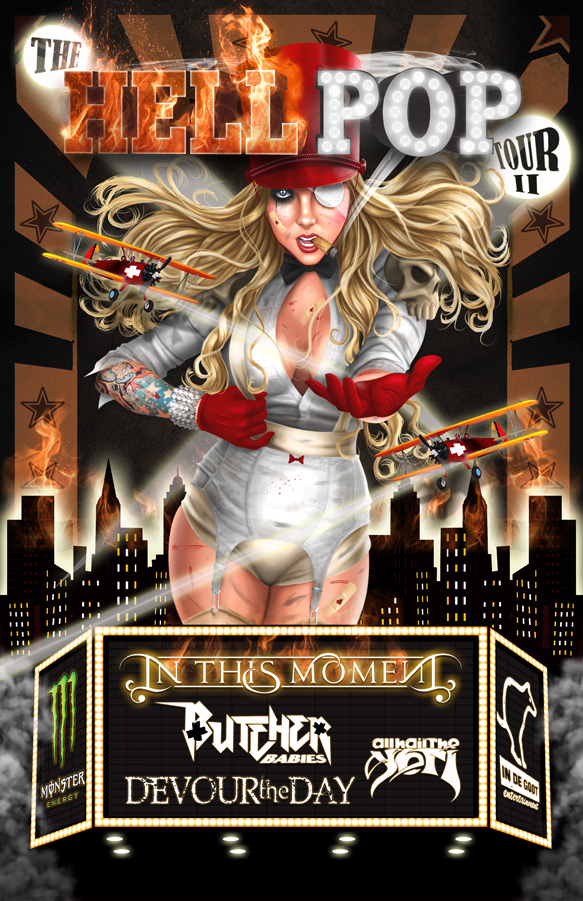 CrypticRock.com –  That is completely understandable. It’s all a learning experience for better or worse. Goliath is a extremely aggressive record. The combination of the two vocal styles really works well throughout the album. When you do go back into the recording studio do you have an idea of what direction you’d like to go in on the next album or is it too early to tell?

Heidi Shepherd – Yes, Goliath was really nice. We put a lot of emotion and a lot of feelings that we have built up throughout our entire lives on that album. It’s a very emotional album if you listen to the lyrics closely and to the emotion put into it. This next album is going to be pure aggression. We have already started to write and we actually start recording a little bit in a couple of weeks. We will be recording throughout 2014, this album will be very heavy. We are really excited about it. 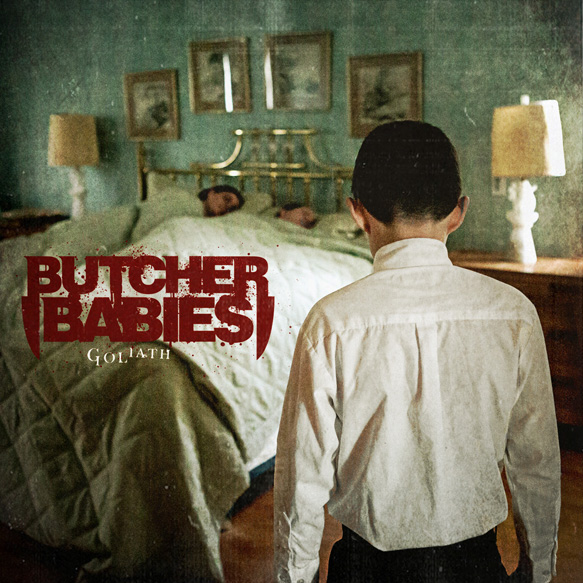 CrypticRock.com –  Wow, very cool. That is something to look forward in the coming year or so. You recently released a video for “Smell A Massacre” from a live performance at the 2013 Mayhem Festival. The video has a real gritty look to it which is great. Was this something you were going for with the video?

Carla Harvey – Yes, it was one day shot in Chicago during mayhem festival there. It’s a great video. The director, Davo, also did our “Mr. Slowdeath” video. He is a great guy, I love the way that he sees things. We don’t get to watch ourselves on stage (laughs), we’re not in the crowd, and that video really lets you know what it feels like to be a part of our crowd and feel the energy that we put out. I am a huge Guns N Roses fan, even when I was a kid, and I remember when they put out their live video for “Paradise City” and watching this video I couldn’t believe this was our band. You are up there and you see it, but it is from a totally different perspective.

Heidi Shepherd – Even on the stage, everything that we feel on the stage, you can see it on our faces in the video. He captured our performance so well, the first time I saw it I had chills. I didn’t know that a live video could come out that well done. He did a great job. It looked so gritty and cool, and the audience looks so massive that I couldn’t believe there were actually that many people there.

CrypticRock.com –  It really is nicely done with the grittiness and the angle that it is shot.  Sometimes you’re so locked into your performance that you can’t enjoy the moment. Do you ever find that you need to stop and absorb the moment rather than full speed ahead?

Heidi Shepherd – Not anymore, at first yes. I think there was a turning point last January for all of us where we had show after show and the crowds became more accepting of everything we were doing and it allowed us to start having fun again. There was a time where it was hard because of pressure and everything; we work well under pressure. Over the past year it has been all-out fun, and you can tell when we are on stage, you can see our smiles. We’ll have parts where we jump together or are doing things together on stage just cause it’s fun, but I don’t even think about those things anymore because it’s so second nature. I look at the crowd and I’m having fun, and we can definitely take in the energy from the crowd. 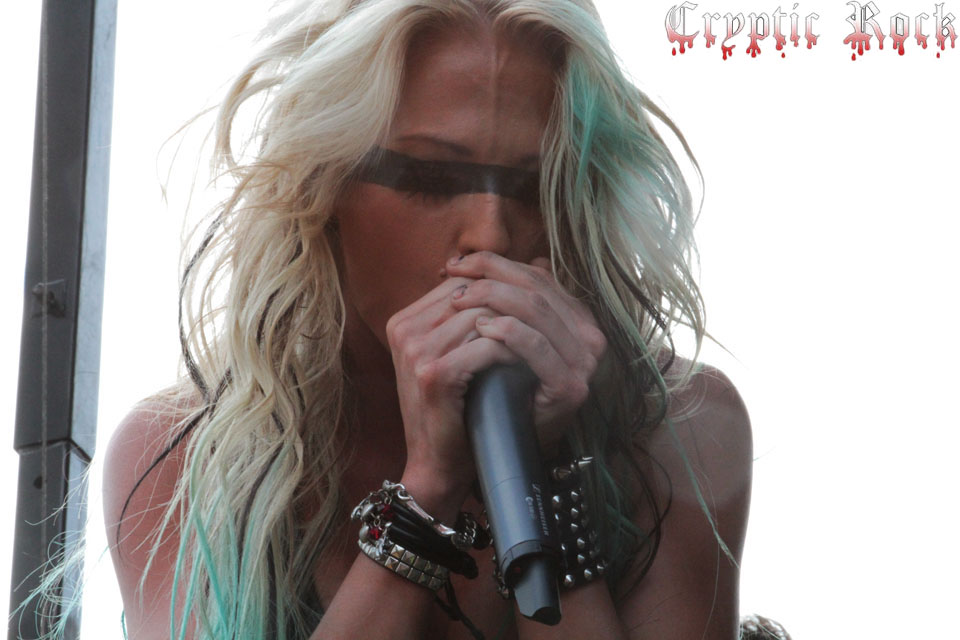 CrypticRock.com –  That’s definitely a good thing. There seems to be a turn in the metal genre of more female fronted bands in what has been a strongly male dominated scene for so many years. It’s refreshing to see more balance in the scene with bands like yourself, In This Moment, and Halestorm, but what I want to know is do you find it frustrating that sometimes people have these misconceptions of you being that your both attractive women and sadly the society that we live in tends to be shallow? That they just look at you and don’t judge the music?

Heidi Shepherd – Yes, absolutely. I think anyone would have a problem with that regardless of what genre, or anything you’re involved in, because of what you look like or what you are suppose to be doing. That’s one thing we have always tried to defy. Carla and I are very used to that. Prior to Butcher Babies, we both had jobs in male dominated industries, so we are used to people saying we can’t do things because we are female. When it comes to the music, it speaks for itself. The great thing about metal right now, and someone very powerful in the music industry that came to our show said this to us, he said you guys are bringing out hot women to the shows. What is interesting is you have more female-fronted bands and more females are coming out to the shows, it’s better for the dudes anyway.

Carla Harvey – Who follows the hot chicks? The guys. It’s packed houses all around.

Heidi Shepherd – Honestly, it is a double edged sword. People won’t take you seriously and then there are people who do. As long as there are those people who do, we are doing something right.

CrypticRock.com –  For those who don’t take you seriously, you prove them wrong every night you hit the stage because you tear it up with heaviness, aggressive, emotional , and very real vibe. People may have misconceptions because of your appearance but this is the way you were born.

Heidi Shepherd – Well, I do wear like 10 pounds of make-up, but other than that… (laughs). We actually did not grow up pretty girls. I was so funny looking with weird color hair, big nose, a lot of freckles, big ears; just really awkward. I had an awkward body and kids didn’t like me up until college when maybe my body started to change. People were rude to me growing up. Kids can be assholes.

Carla Harvey – I was chubby, had frizzy hair, wore glasses, bucked teeth, and all that stuff. Music was everything to me. It was the only thing I had. I got picked on all the time and music, metal especially, was the one thing that I felt gave the anger inside of me a voice. 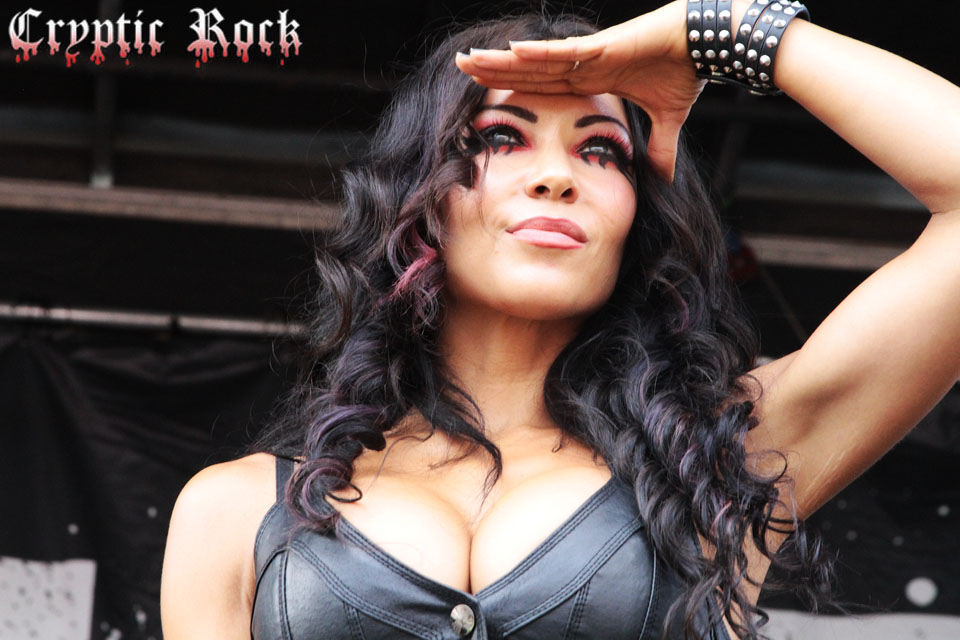 Heidi Shepherd – Music was the only thing I could relate to. I’m the oldest of 6 kids, so I got to see my brothers and sisters get raised through the same bullshit. I kind of got to help them live through it because I had already been through it. Luck for us we grew out of it and we took the negative and made it a positive in our adulthood. We changed it and became better people because of it.

CrypticRock.com – Yes, and it’s a good thing that you took a negative and made it into something positive.

Heidi Shepherd – That is what Goliath is about.

Carla Harvey – I really haven’t been to the movies. We have been so busy.

Heidi Shepherd – I really like the new Evil Dead. It kept me on the edge of my seat the entire time. V/H/S and V/H/S/2 were creepy. They were really good. I liked You’re Next as well. It was good, I was very impressed. You’re Next is similar to The Purge but better. 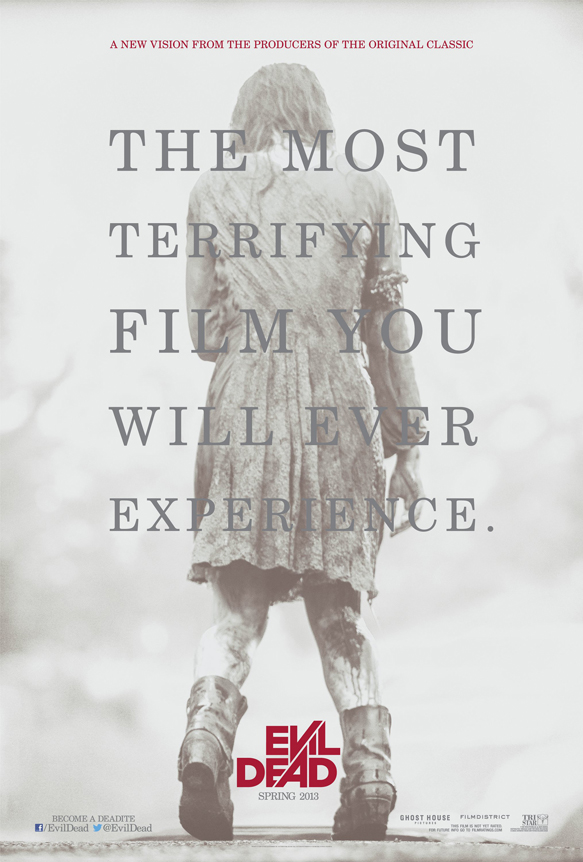 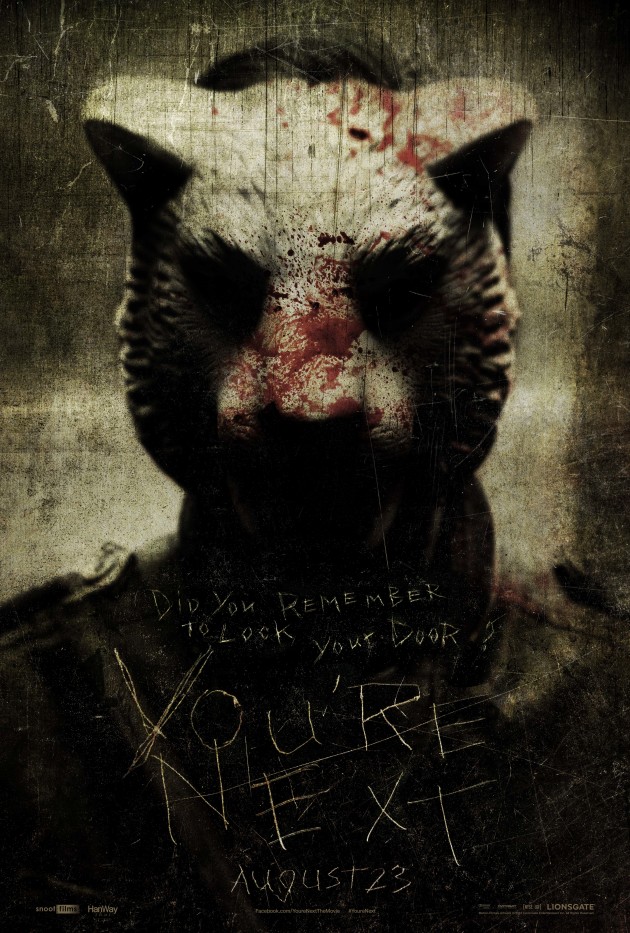