There are many different ways to create a film, some more descript, some more surreal, but always attempting to engage the audience. Enamored by the stylistic approach of classic ’70s Italian Horror cinema, Belgian film Directors Hélène Cattet and Bruno Forzani take a great deal of pride in perfecting a eye-catching viewing experience with their films. A married couple, together they have worked on various film projects together including the acclaimed 2009 Amer as well as 2013’s The Strange Color of Your Body’s Tears Giallo-styled films.

Celebrating the release of their latest collaboration, Let the Corpses Tan, Cattet and Forzani take the concept of a supersaturated filming style to the next level. A film that has been shown at many film festivals throughout 2018, on Friday, August 31st Kino Lorber proudly releases Let the Corpses Tan in New York and Los Angeles Theaters. Gearing up for the exciting theatrical premiere, the director team sat down to chat about their artistic vision, working together, the story behind Let the Corpses Tan, future plans, plus more.

CrypticRock.com – You two have been involved in film for many years now. First beginning with short films and then evolving to full-length features, what inspired you to pursue a career in filmmaking?

Bruno Forzani – A romantic love. I love Hélène and I want to work with her. (Laughs)

Hélène Cattet – Thank you! (Laughs) I always want to learn new things and try and find a new way to express what I want to say.

CrypticRock.com – Quite interestingly you are a married couple who co-direct feature films together. What is it like to work so closely together in a creative matter?

Bruno Forzani – When we finished our second feature, The Strange Color of Your Body’s Tears (2013), it was a film we began to work since 2001, it was 12 years of work. After that film, we won’t work together, it was a bit chaotic. Then Hélène read the book Laissez bronzer les cadavres 10 years ago. She said, “If one day we do another film, we would do this depiction.” It allowed us to recommunicate and work together again.

Hélène Cattet – And to find a better way to work together.

Bruno Forzani – Because it’s not so easy as you can imagine. It’s rich, because we are very different.

Hélène Cattet – Yes, when we have ideas it’s richer than when we are alone.

Bruno Forzani – But at the same time it is complicated to find a good balance where Hélène and I are pleased. It is something you can’t talk about intellectually, it’s something you feel.

CrypticRock.com – Understood. You have created films in various genres, but seem to have a strong attraction to more Horror and macabre subject matter. Is that something you both universally have a passion for?

Hélène Cattet – Bruno is totally a Horror fan. Me, I discovered Horror with him. I was totally fascinated by the Italy genre movies of the ’70s because they were rich and the direction was amazing. It was really inspiring. I am a fan too, but for me, what I wanted to do was to practice. I am really interested in practicing in trying to find a new way to express.

Bruno Forzani – For me, Horror is part of the subculture. It is like Punk music, it is very strong, subversive, and I love that in music. It is what I like when I watch a Horror movie, it is a place the audience is aware. It can be very violent and can be discussed by it, but sometimes have pleasure. That is very interesting for me, for example something like a Dario Argento movie. It is very rich cinema.

CrypticRock.com – Most certainly. Your latest feature Let the Corpses Tan had been shown at various film festivals and now is set to hit theaters Friday, August 31st. A very stylized film, what led to your involvement with this project?

Hélène Cattet – For this one, it was most the Italian Western and British movies from the ’70s. Also the book Laissez bronzer les cadavres by Jean-Patrick Manchette and Jean-Pierre Bastid.

CrypticRock.com – The film’s strongest attribute is the style. It is beautiful shot, features magnificent color schemes, and creates a feel. How challenging is it to create that type of feeling?

Bruno Forzani – When we went to see the Italian movies we talked about, it gave us a lot of pleasure. What we tried to do when we make a movie is to have a experience. You can live it in an theatrical experience. It is something where you lose all your references. We tried to make something chaotic and surrealistic. In the book, there was a kind of fever between the characters – they drink a lot, and when the night comes, something a bit fantastically happens. We tried to re-transcript that fever and make the audience feel that craziness. For us, it is a lot of work to try to make an experience for the audience. We prepared a lot, we tried to find great, powerful sequences. It was 4 years of work. If some people have an experience or get lost in the movie, we are OK with that. (Laughs)

CrypticRock.com – There is a good portion of the film’s events which are unexplained. That said, anyone who is a fan of the genre understand that the style is what makes the film effective. The films made during the ’70s, such as a Dario Argento film, it was all about the style.

Hélène Cattet – Yes, the story is told by the style.

Bruno Forzani – Yes, in fact, genres such as Giallo and Spaghetti Westerns were made by great directors such as Sergio Leone and Dario Argento. We re-use that language to tell our own story and re-use them in other content. For us, the style tells the story. It’s not a style of a substance, it’s style with the substance. 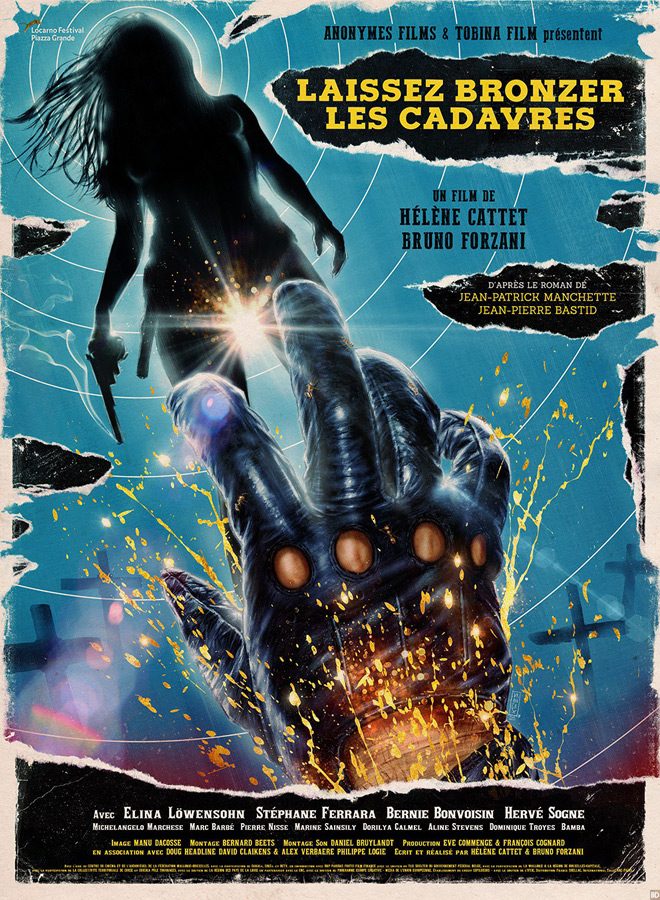 CrypticRock.com – That is a great way to describe it. With Let the Corpses Tan celebrating a theatrical release, what is next for you?

Hélène Cattet – Yes, at the moment we are working on a new adaptation, it will be an animation movie. It is a new challenge in the animation universe that we don’t know at all. Then we will be writing a live action movie.

CrypticRock.com – It will be exciting to see what you think up for an animation film. Last question. Clearly passionate about film, what are some of your favorite Horror related films in the genre?

Hélène Cattet – There are so many.

Bruno Forzani – There are a lot. In the Italian genre cinema there is Deep Red (1975) from Dario Argento, I think that is our favorite. The Whip and the Body (1963) from Mario Bava. The zombies movies from Lucio Fulci as well. The House with Laughing Windows (1976) is a very scary Giallo from Pupi Avati. There are so many. (Laughs)

For more on Let The Corpses Tan: kinolorber.com | Facebook