The Goo Goo Dolls are a band that has never been afraid to try something new. Beginning in the working class city of Buffalo, New York, over the last thirty plus years they have morphed from Garage Punk rockers to multi-platinum Alternative Rock darlings. Growing as songwriters and as performers, Goo Goo Dolls have sustained success, have achieved 19 top ten singles on various charts from 1993 to present day.

Yet still, even after all these years of struggle, success, and hard work, Goo Goo Dolls yet again looking to push the boundaries of their creativity. Which leads us to 2020 where they back at it with their unexpected Christmas-themed album, It’s Christmas All Over. Their first ever holiday record, it is chalked full of signature classics, a couple of fun originals, plus a few other delightful surprises. A bright, new adventure for the band, John Rzeznik recently sat down for a candid talk about the inspiration behind It’s Christmas All Over, doing what he wants to do as an artist, plans for new music, plus more.

Cryptic Rock – The Goo Goo Dolls has been going strong for decades. You have become extremely successful and grown as a band. You released a brand new LP in 2019, Miracle Pill. Briefly, tell us, what have the last few years been like for Goo Goo Dolls?

John Rzeznik – I think that they have been probably the most productive years we’ve had. Rock-n-Roll and being in a band is very much a young man’s game; you start to run a little bit quicker the older you get, because you’ve gotta. (Laughs) I feel like the pace of the way people release music has just accelerated it so much. I’m old school: I like making a whole album, putting it out, and working it. Now it seems the trend is release a song every month or two. For the last six years it’s been very productive for us. We’ve had our nose to the grindstone.

Cryptic Rock – You have definitely been very productive. It’s true, not many artists are concentrating on albums anymore. Wouldn’t you agree that albums are important for music, especially Rock-n-Roll?

John Rzeznik – I agree. You sit down to write an album. If you sit down to write an album, you have to write one song. So you write one song, and I believe it forms the next song that is being written. There is a certain continuity that sort of unconsciously seeps into the music, because you are creating an entire body of work at one time. The thing is, it’s a completely different mentality releasing one song at a time. The way you are looking at it is – this is my single. With that, you are swinging for the fence on every song, which isn’t necessarily a great thing. 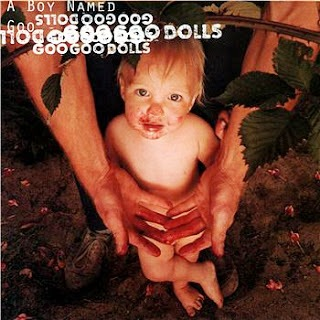 Cryptic Rock – Right, it makes sense how that pressured mentality can take over with that way of releasing/making music. Now Goo Goo Dolls are back with a holiday album, It’s Christmas All Over. The band’s first ever Christmas-themed album, what inspired you to put this together?

John Rzeznik – Well, I have witnessed probably the most insane year ever since I’ve been alive!  From the beginning of the pandemic to being out in Los Angeles recording all these Christmas songs, with this Christmas cheer and being festive, and literally walking out the front door to be in a crowd of 10,000 people marching for social justice. It just felt like, yeah, this album is something that is needed this year at Christmas. I just wanted to make it trashy, fun. I wanted to make it sound and feel like the old school records my dad had that we’d listen to at Christmastime.

John Rzeznik – Mostly publishing… I’m kidding! (Laughs) We just wanted to write a couple of originals. “This Is Christmas” is what you would sort of expect from a Christmas song from us. But “You Ain’t Getting Nothin’,” which is my personal favorite, is probably in the top five nastiest Christmas songs. I wanted people to laugh a little bit. I think it’s good medicine for a guy who is a “rockstar,” I put quotes around that, to take the piss out of himself and everything else around him once in a while. I never want to get caught in that trap that I’m too cool to do something. I can be incredibly self-deprecating, but I just felt like the album had to have that feel. I didn’t care. I’m not trying to be super cool – I’m done. (Laughs)

Cryptic Rock – (Laughs) Well it definitely is a good listen. It has an old school vibe which works too. You also have a reimagined edition of “Better Days.” It is sort of an unofficial Christmas song for a lot of people because of the lyrics and the hopeful message. What lead to the decision to record it this way for the Holiday album?

John Rzeznik – Well, our keyboard player Jimmy McGorman, who is also one of the producers on the album, was at home fiddling around with how to change the song. His daughter started singing it, so he recorded her singing it. He brought it in and said, “Check this out.” I was listening and he said, “I can take it home, we can fix it, and she can do it better than this.” I told him, “No man, that purity is what this record needs.” There is no faking it; whatever came out of that little kid’s heart, that’s what wound up on the record. We used the demo vocal because it was so beautiful.

Cryptic Rock – Absolutely. The original is an amazing song, but you get chills hearing a child sing it. Especially with the way the world is right now, that innocence and sense of hope really hits you hard.

John Rzeznik – Thank you, I appreciate that.

Cryptic Rock – Well the album is out now and people can enjoy it all Christmas season. With this Holiday album out, you also recently released a new video for “Autumn Leaves.”

John Rzeznik – Yes, there was another video that came out. I’m just starting to demo some ideas for some new music. How we’re going to do that, I don’t know – I’m confused. Me, I like the old way of doing things – going way back to 1988, which is 22 years ago, what the hell! The pace of technology has been accelerated to the point that we’re all just hanging on. It will be interesting to see what happens.

Cryptic Rock – It will great to hear new music again. So this will be a quick turn around for a new album or EP?

John Rzeznik – I’m still hoping that we’re going to get to tour late in the summer of 2021. I don’t know if it’s going to happen. I’m trying to stay positive and we will be out in the middle of July of 2021, and yeah, we’ll have a bunch of new music. I’m pretty excited because I’m just blowing the walls out of what I’m doing. I’m at a point in my career where I’ll sit there with a beat box and a synthesizer and say, “I dig this, it’s cool,” and it’s because I’m sitting at home with a synthesizer and a beat box. (Laughs) It’s going to be fun. We really stretched the boundaries of what this band can do by making this Holiday record. It’s interesting and another chance to grow.

Cryptic Rock – Agreed. Hopefully you can tour in 2021. The Goo Goo Dolls have been very consistent with touring throughout the years and have been a great live band. You mentioned how as you get older you try and move a little faster. How do you keep things fresh for yourself performing night after night and city after city?

John Rzeznik – Some nights it’s not fresh. Some nights your tired, some nights you have a bad voice. Some nights it’s too frigging hot! You have to leave all that crap at the side of the stage. You have to realize, “Look man, these people spent a lot of dough to come and see you play.” They don’t give a shit about your problems, they just want to see a good show; you have to go out there and do your job. That’s always been mine and Robby’s work ethic, and that is something we expect out of everybody we work with. We have an amazing band and crew. You go out there and get the job done. That’s Buffalo style! (Laughs)

Cryptic Rock – Right, that comes from the blue collar background of Buffalo, New York. It comes from your roots, from initially being a Garage Punk Rock band. You do it yourself and get it done.

John Rzeznik – Yeah. It’s  funny, I was having a conversation with someone recently of what the music scene was like in Buffalo when we first started this band. We were 19 when we started this band! It was crazy because we had to do everything ourselves, because we couldn’t get gigs in normal places. Some friends who believed in the band just started renting out halls, putting flyers up on telephone polls, and going to the college radio station to get their support. We did everything: we styled our own clothes, wrote our own music; it was all very DYI. It was exciting.

Cryptic Rock – It is also great stories to tell later on. You mention how you started this band when you were 19. Being in a band the pay off does not come right away…it may never come.

Cryptic Rock – It is true. You guys pushed ahead for many years. For many years you were an underground band. You began to break into the mainstream with 1993’s Superstar Carwash and then things really took off with 1995’s A Boy Name Goo. What kept you going and saying, “We are going to keep doing this”?

The other thing that kept us going too was there used to be record executives like Lenny Waronker and Mo Ostin who were running Warner Bros. at the time. They said, “We believe in you guys. We’ll give you a little bit of money every month. You just pay your rent and just keep being creative. We’re going to break your band.” That system doesn’t exist anymore, unfortunately. I don’t believe artists are given enough time to find their real voice. I don’t believe there are too many sets of ears out there that can truly hear the potential in someone.

There are things like American Idol, which is cool, because there were some great people that came out of it like Carrie Underwood, Kelly Clarkson, Daughtry, etc.; there are some great artists who came out of it and who have gone on to have great careers. But the whole talent show themed thing, I’m not sure if the people on those shows are the best out there; I believe they are just copying what’s out there. I believe that there is a very vast underground of organic music out there.

John Rzeznik – No, they don’t. They used to have guys who were go-to staff producers; that’s how we met Rob Cavallo who did all our big records. Those guys don’t exist anymore either. In order to be a producer now, because the money is not there, you also have to be the writer, engineer, and mixer. I think sometimes the quality of that hurts the music.

Cryptic Rock – Right, very valid and true. Last question. Let’s end this on a Christmassy note. What are some of your favorite Christmas movies?

Goo Goo Dolls – EP 21 (EP Review) John The Ghost – I Only Want To Live Once (Album Review)
Like the in-depth, diverse coverage of Cryptic Rock? Help us in support to keep the magazine going strong for years to come with a small donation.