Releasing their twelfth overall studio album, Incorruptible, back in June of 2017, American Heavy Metal institution Iced Earth is entering their third decade as standard-bearers for Heavy Metal music in its purest, most honest form. The man at the helm is one Jon Schaffer, whose steadfast approach to songwriting and creating traditional Metal anthems has remained defiantly unchanged by trends, patterns, and outside influences. Through health issues and lineup changes, Schaffer’s vision for Iced Earth has endured, resulting in critical acclaim, world tours, and a healthy fan base energized by the dynamic vocals of Stu Block. Recently we caught up with the busy and productive guitarist to discuss their latest album, plus a host of other topics.

CrypticRock.com – This year marks the 30th year of the existence of Iced Earth after changing over from Purgatory. When the journey began, did you ever envision that 3 decades later you would be where you are and achieve what you have achieved?

Jon Schaffer – I figured that if I lived through all of the crazy shit from the old days that we would still be relevant. In hindsight, 3 decades is a very long time, and I’m grateful for an incredible journey so far.

CrypticRock.com – It is certainly an incredible run. Last year’s Incorruptible, your 12th studio album (13th if you include the covers), is a magical album. It achieves the same feeling from what fans derive as the “classic period” of the band, yet with more nuance. What was it about the writing experience for this one that led to this result? From the liner notes, it appears contributions came from everywhere.

Jon Schaffer – Well, in general, the public perceptions of how things go and how they actually are… are two completely different things. Personally, I think Incorruptible sounds nothing like Burnt Offerings (1995), but if it gives you a great feeling, then mission accomplished! The songwriting process has been the same from the beginning. The technology has changed on how it is done and how pre-production is done, but it’s really the same every time. It’s just sometimes things gel in all the right ways. I think that is the case with Incorruptible, and I knew it very early in the process. There are always contributions from others, in every process, of every record.

CrypticRock.com – There is definitely an amazing dynamic within the album, evident in each song. Is it safe to say that you finally getting your neck and health concerns into a – pardon the pun – stranglehold, has released you creatively? Do you feel recharged, and do you feel this is the lineup you have been waiting for with Iced Earth?

Jon Schaffer – My neck issues will always be there, unfortunately. At the moment it is doing ok. The long flights and constant travel are the biggest factors that cause the problems to get worse. So, we’re trying to do things a little more intelligently these days. I definitely felt very inspired during the writing process, and was rested up as much as could be when forging Incorruptible.

There have been many amazing musicians in Iced Earth through the years, so I will not take anything away from them. The chemistry in this line up is very special and all 5 of us are very close on a personal and spiritual level. It’s a very, very special thing that is happening.

CrypticRock.com – Well here is to your continued good health, and continued creative chemistry within the band. Heavy Metal veterans Helloween are doing this Pumpkins United tour with all three of their vocalists. Is this something you would ever consider doing with Stu, Matt, Tim, and even John Greely, if schedules allowed it? As a treat for longtime fans?

Jon Schaffer – You never know what the future holds. Anything is possible, but there is no current plan for such an event.

CrypticRock.com – As an artist, how much pressure do you feel to appease fans expecting 1991’s Night of the Stormrider every single time? Does it ever invade your creative process, or do you follow the muse and steer Iced Earth where only you believe it is meant to go?

Jon Schaffer – I only follow the muse and steer it where I think it needs to go. It’s the only honest way to do it. It would get old for the fans if every album was the same. They just want us to always capture that moment when they first fell in love with the band. I get it, and definitely am proud that we have such a strong catalog that has stirred so much passion and varying opinions on the records. Staying honest and true to yourself, and your feelings, makes every cycle something special, because it all reflects what is happening in our personal lives and it is a kind of therapy for us as well. It’s the only way to make your art genuine. It’s very selfish in a way, but it’s very true. Sometimes people get it, and sometimes they don’t. I’m ok with that. 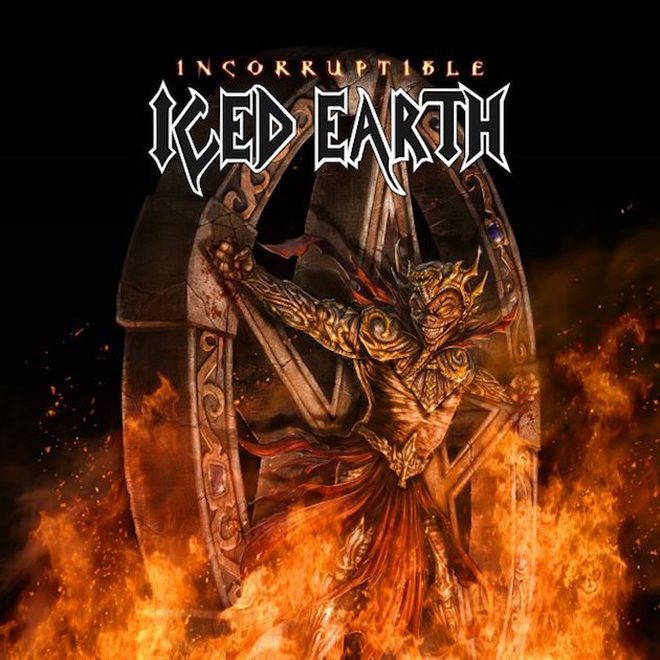 CrypticRock.com – No matter what an artist does, there will always be complainers. Looking back to when you first began Iced Earth, the way in which fans consume music has changed dramatically. Nowadays it’s sensory overload on the internet, bands everywhere. Has this affected Iced Earth? Metal fans seem to still buy the physical copies, esp when you present them in as awesome a package as the art book.

Jon Schaffer – It has changed drastically. A lot of Metal fans still buy physical, but not all of them do, and I wish they would. The industry is becoming so brutal that I fear the motivation for artists in the future will not be as prevalent as it once was. It’s a slippery slope to a place that the fans won’t be happy with either. They need to support the bands they love. Period.

CrypticRock.com – Agreed, fans should be supporting independent artists whenever they can. “Clear the Way” is a massively worthy opus, clearly ensconcing your favorite time period. Is there a lesson in the context of this song that young fans could learn from? In our pampered modernity, no one in the western civilized world – unless you volunteer for combat – experiences things like this. What can history teach us here, as our society devolves further into consumer greed and self-centeredness?

Jon Schaffer – We all need to learn from history. Always. All the time. There is not enough importance placed on this fact in the western educational systems. I feel like planet Earth is the insane asylum of the universe. We constantly repeat the same shit over, and over, and over, and expect a different result. We never learn here on Planet Dum Dum. (Laughs)

CrypticRock.com – That is the very definition of insanity, and it appears to be only getting worse. How difficult is it to choose songs for the set list these days? The albums and the classics are piling up! How do you guys arrive at that decision?

Jon Schaffer – It’s very difficult, there are so many songs and so many that really touch people deeply. We just discuss it among ourselves and we listen to the fans, but we can play for 2.5 hours and people will still complain the we didn’t play certain songs. It’s a great problem to have.

CrypticRock.com – If anyone complained after a two and half hour set they would have to have their head examined. What has it been like to work with Hansi Kürsch again? How have you both changed since the last album in terms of your creative process.

Jon Schaffer – We’re just getting started on this process, so we’ll have to have that discussion at a later date. My feeling is that we will always work in the way we always have. We are the same people, just a little older and wiser. Hopefully. (Smiles)

CrypticRock.com – Both Blind Guardian and Iced Earth have thrived since that first Demons & Wizards album. It will be great to see what you both come up with. We see the character gracing the cover of Something Wicked, from the Set Abominae world, holding up the flag and charging during the Battle of Fredericksburg. Is this the manipulation of human affairs we were told about in the “Birth of the Wicked?” Are we seeing hints of the grand conspiracy, or was his inclusion coincidental?

Jon Schaffer – Stay tuned for more from the Something Wicked Universe… Everything is possible.

CrypticRock.com – The presence of these characters certainly adds a lot of intrigue and dimension to followers of Iced Earth. Last question. CrypticRock also covers Horror and Sci-Fi films. If you are a fan of either genre, what are some of your favorites and why?

Jon Schaffer – I’d say the Omen trilogy is up there pretty high. I’m not so much into gore anymore because most of it isn’t scary. I like the spiritual and Psychological Thriller type of films. It takes a lot to scare me, but there’s a bigger chance of the latter giving me a fright than a gore movie.

I like several Sci-Fi films, a lot of the dystopian ones we wrote about on the Dystopia (2011) album come to mind. Of course the old Star Wars films and Star Trek are great too.

Interview – Michael Weikath of Helloween Interview – Richard Sjunnesson of The Unguided
Like the in-depth, diverse coverage of Cryptic Rock? Help us in support to keep the magazine going strong for years to come with a small donation.