There is something magical that happens when you tell a story. A story can ebb and flow in various directions, while characters blossom in amazing ways. Lynn Renee Maxcy has been enamored with the art form since a young age, and her passion has led her to an award-winning career as a television and film writer. Known for her work on the hit Hulu series The Handmaid’s Tale and Syfy Channel’s Eureka, Maxcy has also expanded into the game world as well as feature films with her latest effort, The Complex: Lockdown.

Released on Digital/HD as of October 13, 2020, The Complex: Lockdown marks Maxcy’s debut feature film and an exploration into the world of Science Fiction. An exciting and creative time for the writer, she recently sat down to talk about her career in television, her experiences, plans for more work in film, plus a whole lot more.

Cryptic Rock – You have been writing professionally in television for a decade now. First, briefly tell us, what inspired you to pursue a career in writing for film/television?

Lynn Renee Maxcy – That is such a fun question! I’ve always been a storyteller since I was a kid. About 10 years ago, when my husband and I moved to Los Angeles, I just fell in love with television. I fell in love with telling the same story over a longer period of time; hopefully you are telling a story of 10-22 episodes over an entire year. It’s just a lot of time to get to spend in the world and getting to know your characters. For me there was something about getting to collaborate with so many other brilliant writers who all come together to create this world and story; it just fits everything I was looking for! I feel so happy and lucky that I get to do this for a living.

Cryptic Rock – It is great that you have been able to do it and be successful. Among your credits you have worked on series such as Eureka and The Handmaid’s Tale. What do you take away from all these experiences?

Lynn Renee Maxcy – Honestly, friendships first. I have colleagues and people I’ve been incredibly lucky to work with and learn from. I think every project/story has its own complications and things you have to learn and figure out as you go. Hopefully when you run into the same story or production issue on another show, you can know what to do quicker and make even more compelling stories come to life.

Every job I’ve ever had I just take wonderful relationships. Hopefully I’ve become a better writer along the way!

Cryptic Rock – It is important to build those relationships and friendships. The Handmaid’s Tale has become an extremely popular series and a lot of that has to do with the writing. How exciting is it for you to see the series get the recognition it has?

Lynn Renee Maxcy – It’s absolutely incredible. It was definitely a surreal experience to get to take this book that I loved since I read in college and follow the story. I get to find out what happens next and get to create what happens next along with our incredible writers’ room. It’s been quite a trip, but I wouldn’t change it for the world.

Cryptic Rock – It sounds like it has been a great experience. With The Handmaid’s Tale returning in 2021, you have worked on other projects. You have a new film called The Complex: Lockdown that follows an interactive video game.

Lynn Renee Maxcy – It’s funny because the interactive game, The Complex, is a game, but there is no game play; it is purely narrative. Instead of me being the one writing the story and directing the viewer where to go, it takes a step back for me. You get to hand that control over to the viewer; they get to make the choices they want to make and the interactive game has eight different editings. It has been really fun to first create something like that and work with an incredible team.

Then, with Paul Raschid’s incredible direction, he just got to come and we created this world that we really love. We loved it so much we wanted to create The Complex: Lockdown for people, who, for whatever reason, didn’t want to do the interactive version. The movie is a new way for them to get into this world and meet these characters.

Cryptic Rock – It has a lot of interesting concepts. That said, what was the inspiration behind the story?

Lynn Renee Maxcy – I’m definitely a Sci-Fi girl. I’ve always been drawn to telling stories, especially like this that are five minutes in the future and deal with technology and its impact; stories that talk about where we are going with it and how it impacts our worlds and lives, for better or worse. For every incredible technological advance that helps the world, there is also the possibility of it creating incredible harm. Those are the kind of stories that I’ve always naturally gravitated toward and wanted to create.

When I sat down with the original idea I had for The Complex, I was really curious what it might look like for someone who created neo cells, someone who created a piece of technology that could bring so much hope and healing into the world. And yet other people get involved and use the technology for their own end; gratification and pursuit of power. That was a really interesting place for me to get to dig into. I wasn’t sure how a character like Amy would react – I don’t know how I would react. What if the good and evil of technology are at war in front of you, what would you do?

On the personal side of the characters, Amy and Rees, they are scientists who have had a personal relationship. They definitely know each other and it clearly didn’t end well the last time they saw each other. So you have this incredibly heightened situation where one wrong step can end up getting them killed yet they are there together. What do you say to the person you haven’t spoken to in five years, but have thought about every single day? That seemed like such a rich character story that I was very interested to dig into. All of that together became The Complex.

Cryptic Rock – It makes for a very compelling story. What really makes it even more frightening is we are living through a pandemic right now. Does it sometimes frighten you how Science Fiction starts to reflect reality?

Lynn Renee Maxcy – Yes! I’ve definitely looked at the world and thought, “Whose Sci-Fi script came to life?” I think that’s one of the things that drew me to Sci-Fi: it’s an ability to imagine what the future could look like. I think it’s terrifying sometimes to think what could happen. Yes, I wrote this story, but I hope nothing like this would ever happen in the real world. I think Sci-Fi gives us a chance as humans to explore what you might do, ‘who do you want to be standing with at the end of the world’ kind of questions.

Cryptic Rock – Absolutely. The Sci-Fi stories that resonate are the ones with a bleak future, stories about technology taking over – and it seems to be happening.

Cryptic Rock – (Laughs) Hopefully. Seeing you have worked in television a good deal, would you be interested on working on features more, as well?

Lynn Renee Maxcy – Absolutely. There’s actually a couple of projects that I’m working on right now that are features. I have a plot that I’m doing right now, but I love both. I think there is something that is really interesting that there are certain kinds of stories that just fit better in television or as features. I think to get to tell those stories – and have a clear beginning, middle, and end – that need two hours of your time to tell is so much fun. The idea of getting to write features is something I look forward to.

Cryptic Rock – It will be exciting to see what you have coming up. Writing is a challenge, and sometimes when you write something down it is not the wording you want to express. What is your approach to writing?

Lynn Renee Maxcy – Definitely. I honestly can’t even tell you how many drafts of The Complex there were. It is such a process when I sit down to write something. I try really hard not to edit myself the first time through; I just write the messy first draft that no one will see expect for me. Especially writing for TV and films, so much of the writing – such as the exact wording and exact specific theme – comes out a lot in the re-writing and editing. We say “We don’t actually need that scene” or “I love this character, I want to write more with them.” We get to create and continue creating until everyone looks at the script and says, “Okay, we’re done. Let’s go shoot it!”

It looks a lot like me cuddled up in my office or on my couch with my laptop typing, typing, typing. It’s so much fun and such a weird, wonderful, and crazy thing I get to do with my life.

Cryptic Rock – It truly is great when you get to follow your passion. Last question. What are some of your favorite Sci-Fi and Horror films?

Lynn Renee Maxcy – There are so many! My favorite Science Fiction films are definitely Arrival (2016) and The Martian (2015). I think there is something really grounded, fascinating, and human about both of those. For Horror, one of my favorites is The Cabin in the Woods (2011). I thought it had such an interesting story and dynamic. I thought it had an interesting commentary on fear, what fear is, and how we all make our way through the world together, as well as on our own. I can talk about favorite movies for hours! How long do you have? (Laughs) 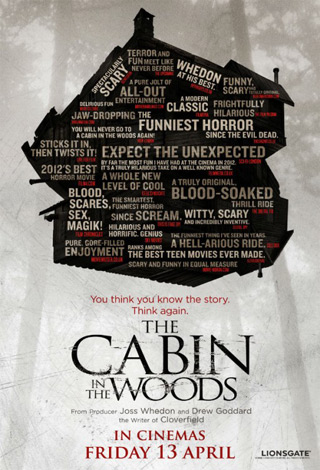