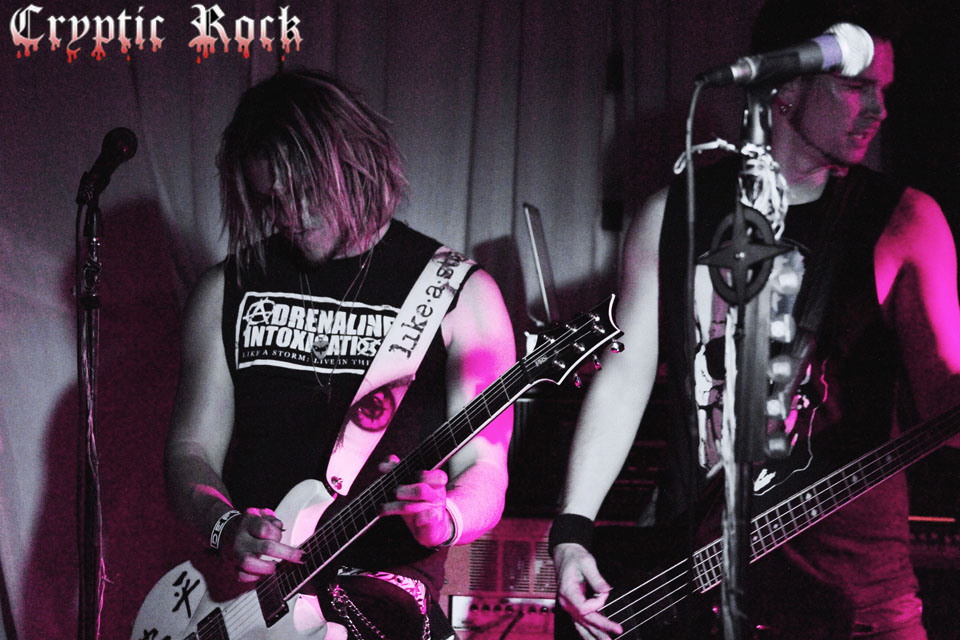 When you think of New Zealand you probably think of beautiful landscapes and not rock n roll. Three brothers from this beautiful country are looking to change that perspective with their band Like A Storm. Having made waves with their debut album The End Of The Beginning the boys released their follow-up Chaos Theory Part 1 late last year. Recently we sat down with guitarist/vocalist Matt Brooks for a intimate conversation about the passion, determination, and drive of Like A Storm.

Crypticrock.com – First, congratulate you guys on your second headlining tour of North America. Now, Like A Storm features yourself (Matt) and your brothers Chris and Kent and Roye Robley on drums. Tell me how Like A Storm first started for you guys and what is it like working with your brothers?

Matt Brooks – Thanks so much man! It has been a great year so far, and we feel so lucky to get to do what we love every day. As far as how we started, Kent, Chris and I all started out playing in different bands, but every time we jammed together we just had such a great chemistry. It just made sense for us to start playing and writing together. I feel very lucky to play in a band with my brothers, they are both incredible musicians, and we are all on the same wavelength musically which makes writing and playing together so natural. We all feel that exact same musical connection with Roye, which is just amazing!

Crypticrock.com – Now you guys are from New Zealand, a country known for its beautiful landscape. What was it like growing up there and how did this influence the band’s music?

Matt Brooks – New Zealand was such a beautiful place to grow up. Every time we go home to visit I’m blown away by how incredible it is. New Zealand is a real cultural melting pot, so we were influenced by a lot of different musical styles growing up such as American music, English music, and the music being created in New Zealand. NZ is definitely a land of epic beauty, something that I think we strive for in our music (laughs).

Crypticrock.com – It sounds beautiful. As a band of brothers you decided to make a collective decision to move to North America to further pursue music. Was this a difficult decision to leave your home?

Matt Brooks –From the first time we jammed together, we knew that if we wanted to take our music to the world, we would have to leave New Zealand. It was a huge adventure, to leave home and travel the world, chasing down your dream. But it is hard to leave your family and friends behind. I always look forward to seeing them when we go home to escape the American winter!

Crypticrock.com – It surely must be an adventure for you and sometimes you need to make hard sacrifices to pursue your dreams. You guys were on tour with Shinedown, Creed, Alter Bridge among many others. What was that like for the band?

Matt Brooks – It was amazing man, absolutely amazing. Our first ever US tour was opening for Creed, who were one of my favorite bands growing up! It was a dream come true to tour with those guys, they are such great people as well as phenomenal musicians. To tour with Mark, Flip and Brian again as Alter Bridge was another incredible experience. And the guys in Shinedown were just awesome. Their whole set was jam packed with great songs, and they are a such an amazing live band! All the bands we have toured with have been so good to us, and we have learned a lot from each and every one of them.

Crypticrock.com – Sounds like it was a great experience and I imagine helped open you guys up to a bigger fan base?

Matt Brooks – It was an incredible experience man. Our first ever US show was playing to 13,000 people! That first US tour kick started our career, and we will always be so grateful to the Creed guys for giving us that awesome opportunity. We have been touring ever since.

Crypticrock.com – That must have been a pretty surreal experience for your first US show. Your debut album The End Of The Beginning was very successful for the band. “Chemical Infatuation”, reached No. 43 in the U.S Active Rock Top 100. With the success of the first album did the band feel pressure going into writing your 2nd album?

Matt Brooks – We were so proud of The End of the Beginning, it was a huge milestone for us. And coming from the other side of the world, to hear “Chemical Infatuation” on US radio was something I will never forget. That said, we didn’t feel any pressure going into Chaos Theory. After playing so much live we were really excited to get back into the studio and record. We had so many ideas. Songs like “Break Free” and “Love The Way You Hate Me” really showcase how inspired we were feeling musically.

Crypticrock.com – The new album Chaos Theory Part 1 a 7 song album you guys released earlier this year. A great follow up to your first album. Tell me what the concept behind the album is?

Matt Brooks – I really appreciate that man. I think every artist wants to grow with every record they release, and that is certainly something that we strive for. The title “Chaos Theory” really speaks to the highs and lows of being in a rock band, all the adventure, the excitement, the chaos… And making sense of it all. The songs on Chaos Theory Part 1 really capture some key emotions for us from the defiance of songs like “Never Surrender” and “Six Feet Under”, to the escapism of “Break Free”.

Crypticrock.com – The album does display all those emotions you speak very vividly. Now with a title like Chaos Theory Part 1 one would only speculate there will be a “Chaos Theory Part 2”. Is this the case and if so what can we expect to hear on the 2nd part?

Matt Brooks – It certainly is! We already have a lot of ideas for “Chaos Theory Part 2”, we are constantly writing and getting inspired when we are out on the road. When we finish our current Adrenaline Intoxication tour we’ll be heading into the studio to start recording.

We’ll be having the new record mixing by the amazing Elvis Baskette, who mixed Chaos Theory Part 1, and it will be out later this year. I can’t wait for our fans to hear these new songs! We also have our live DVD, Adrenaline Intoxication: Like A Storm live in the US coming out soon – that will be available on our Fall tour. Plenty of new releases in the pipeline!

Crypticrock.com – That will definitely be something to look forward to for fans. You said you guys will be back on a Fall tour? Where about will you be traveling this time around?

Matt Brooks – Yeah we will definitely be back touring the US in the Fall. We love playing for all our friends and fans down here! We will be rocking the Mid West, East Coast, and the South, and with every Like A Storm headline tour we are playing more and more new places. Stayed tuned to likeastorm.com or our Facebook page for new tour dates!

Crypticrock.com – Awesome that is something for fans to look forward to. The band seems to have quite a unique sound. You are a hard rock band no doubt but you incorporate a lot of different elements into the music. Briefly tell me about some of your musical influences?

Matt Brooks – We have always been inspired by artists who push the envelope, who have their own voice and aren’t afraid to take risks. We grew up listening to bands like Tool, Nine Inch Nails, and Metallica, as well as anthemic stadium rock. We are also just total music lovers in general, and we are always looking for ways to incorporate different styles and sounds that we love into our music. The didgeridoo is a perfect example – it started out as an instrument that Chris learned because he loved how it sounded, and now it is one of the most recognizable parts of our band! They are definitely some new elements being added to the mix on “Chaos Theory Part 2”, I can’t wait for people to hear it!

Crypticrock.com – That is something to look forward to! Now on your 2nd headlining North American tour, 2 albums, a dvd, and acoustic album, and upcoming live album you guys have accomplished a lot in a short time. What are the plans for the future of Like A Storm?

Matt Brooks – We feel so lucky to be doing what we love, playing our music for our amazing fans every night! We love music, and we love creating, so we will record and release as much new material as we can fit into our touring schedule. We have had such a great time on our headline tours, so we are really excited to expand our Like A Storm tours further and further!

CryptirRock.com-  It’s very obvious the dedication and passion is there. My last question for you is regarding films. Crypticrock.com is a rock/metal and horror news site so we like to focus on all genres. Are you a fan of horror films and if so what are some of your favorite horror films?

Matt Brooks – Absolutely man! One of my favorite horror films of all time would have to be Kubrick’s “The Shining”, that movie is scary on so many levels. Just so many great scenes and bone-chilling moments. I also love Peter Jackson’s early splat-stick movies like “Bad Taste”, they are hilarious! We definitely love horror, it is such a powerful art form. Nothing makes the heart race like “Hereeeee’s Johnny!”

Purchase The End of the Beginning: