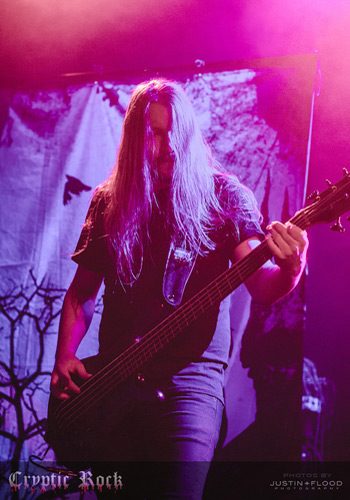 Attempting to label some bands is merely impossible, and a task better left undone. When it comes to Sweden’s Katatonia, what ever box one tries to put them in, they will eventually bust out of. Originally begun as a more Doom Metal act, dating back to their debut full-length, 1993’s Dance of December Souls, Katatonia has continued to morph in style through the years. From the masterful 1998 Discouraged Ones to 1999’s Tonight Decision and more accessible Last Fair Deal Gone Down from 2001, Katatonia are a constantly evolving entity. Recently celebrating their 25th anniversary, the band has sustained several lineup changes, overcoming it all to be an international force in heavy music that takes more than a simple casual listen to absorb. Recently we caught up with longtime Bassist Niklas Sandin about his joining Katatonia, his experience a part of the band, their pending tour of the USA, and much more.

CrypticRock.com – Katatonia has built a name as one of the most respected in the darker Metal genre. In 2016, the band celebrated their 25th anniversary and continue to charge forward strongly. In retrospective, what has this incredible ride been like?

Niklas Sandin – Of course it’s been overwhelming, it is with great pride that I’ve been invited to be part of this. Back in 2009, I had only played the small venues and small stages, but never actually been on a proper tour. It was quite life changing, I would say, being a part of this circus. It’s been really cool, I am still really happy I got the chance.

CrypticRock.com – That is great to hear. Through the years, Katatonia has seen a certain level of progression from album to album. What has this experience been like for you?

Niklas Sandin – It keeps it interesting because then it would be stale and wouldn’t move forward; you would feel like you were creating the same record all the time. I think that would be quite uninspiring and unmotivating. It’s cool that you never really know what the next album is going to sound like. It’s all about what happens and what inspires and influences Anders and Jonas at the present time. That is what guides them to their songwriting. I think that’s the way to go, because then it feels true and fresh, both for you as a musician and for the listeners. 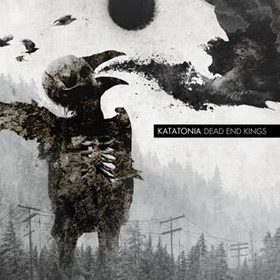 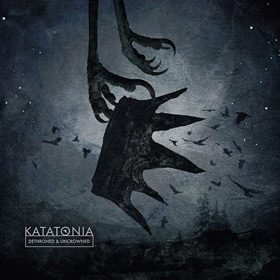 Niklas Sandin – It was like pretty much working on the previous one, 2012’s Dead End Kings. You are sitting at home anticipating the new demos coming from Anders and Jonas and you get little bits and pieces, you get a feeling and vibe what it could turn into.

When more finished demo versions come up, then you get a feel for it on your own instrument. Me as the bass player, I tried to play as much alone with those early versions as much as possible. I try a little bit of different ways to go with the bass lines and just following strictly what’s on the programmed bass. I try to get my own touch and my own feeling in there. Andres and Jonas are open to that, that they see you as a musician, not just a tool.

Then you practice lots at home, come into the studio when the drums are laid down, and glue that in with the recorded guitars. It was no different experience from Dead End Kings to the Fall of Hearts, except of course that the personnel on the record was different.

CrypticRock.com – The record did come out very well. Katatonia is set to return to North America for the first time since visiting back in 2013 with Cult of Luna. How excited are you to come back to The States?

Niklas Sandin – Really excited, it’s been a good couple of years since we were there last. It’s long overdue and I hope that we will get to come back with more than just one tour. We have the ProgPower USA we are playing the 9th of September later on this year down in Atlanta, GA. I just hope that we can go there a good couple of times like we did for Dead End Kings. 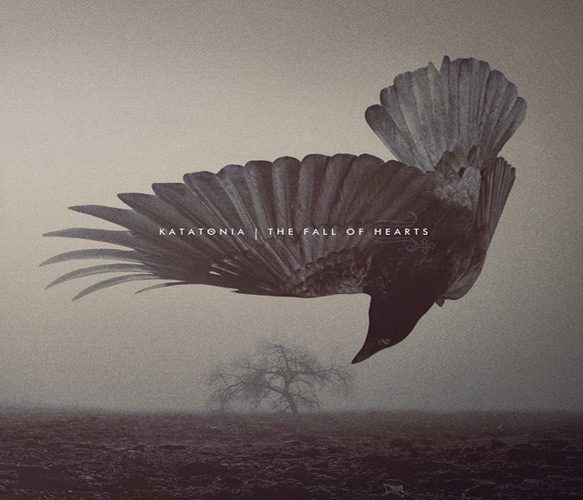 CrypticRock.com – That would be exciting, and this is North America’s first chance to be able to hear the new songs live. With so much back catalogue to go through, without giving too much away, what can fans expect from the set list?

Niklas Sandin – As you would say, there is so much to choose from. What they can expect is that it’s a jam-packed set list of awesome material and, of course, promoting with lots of songs off the new record, incorporating that and trying to make that work with some olds hits, and some surprises maybe as well.

CrypticRock.com – Excellent, well it is always good to have that anticipation. The supporting bands for this tour are Caspian and Uncured. Do you know much about them, and if so, are you excited to be touring with these two young acts?

Niklas Sandin – Of course it’s always exciting to tour with other bands and musicians. This time, I actually have not checked the opening acts too closely because it is a 5 week tour. I will hear them every evening so I am going to try and keep it as a surprise for me to discover during the length of the tour. If you listen too much before, then there is nothing to discover later. You can ask me after the tour (laughs). 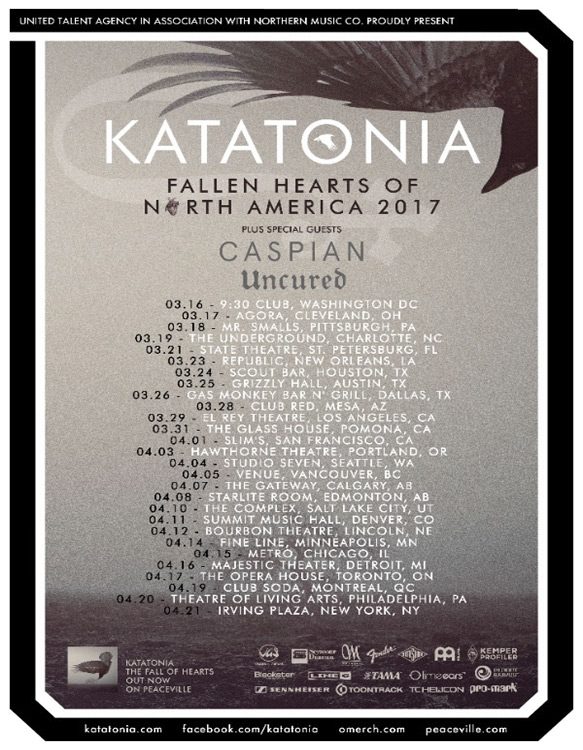 CrypticRock.com – That is a good way to approach it. There is something to said about a level of anticipation and not too much being given away. Nowadays, we want everything spelled out for us and the whole element of surprise is kind of lost.

Niklas Sandin – Yeah, I think that’s actually how it is. Maybe that’s why there is a download code in vinyls as well, because it may be easier for people to download the album before they find energy or motivation to put it on the vinyl player. Even so, I think everybody wants it packaged like a happy meal, where it should be like straight in your face. It doesn’t take time to evolve and mature, it should be straight there without any fussiness.

CrypticRock.com – Very valid point. Katatonia’s music is also very much about an atmosphere. Bringing that to life in a live setting can be a challenge. When you are on stage, what is your experience like?

Niklas Sandin – Of course it’s a special feeling and special evening because, all the time, it is like a communication between those watching you, and the members on stage as well. It is different from evening to evening. Some songs are more emotional than other ones; while others might be more fun to play, which are more heavy and have a little bit more speed in them. It’s a strong and heavy experience for us on stage as well as those watching in the audience.

CrypticRock.com – It is interesting to hear what the musicians themselves are feeling. We always concentrate on what fans feel, but it is also compelling to know what you, the musician, is feeling as well.

Niklas Sandin – Oh yeah, it’s always a heavy experience in a positive way. When it gets emotional for everyone on stage, it is when you see how much the audience appreciates it. When you see that someone is there, and that they are touched by you playing for them, then it feels special. That’s when you realize that it’s not just a fast food industry for everybody. There are actually quite a lot of people that take it to their hearts rather than it being something they just digest and spit out at the end of the day. 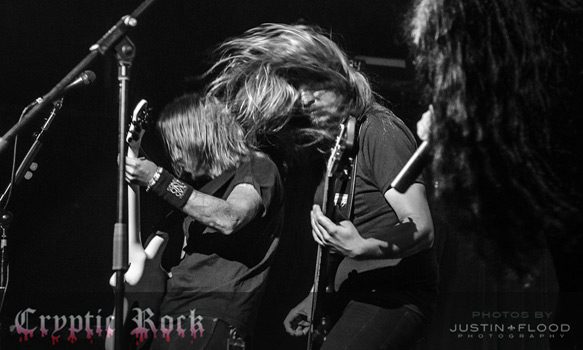 CrypticRock.com – There is no question there are many who take the music quite deep into their hearts. As stated, you have been with Katatonia since 2009. Believe it or not, that is eight years; that is a long time. You have seen a lot of things happen. Out of curiousity, were you a fan of the band prior to joining?

Niklas Sandin – I wasn’t per se like a fan of the band, but I really liked The Great Cold Distance (2006). I picked that up from the CD store pretty much at the same time as I picked up Opeth’s Ghost Reveries (2005). Those two records were the ones spinning for a couple of years; they were on high rotation in my CD player. I was really digging that album.

Without knowing, when I was playing music with Ronnie Backlund when working with Amaran, that he was the tour manager for Katatonia at the time. That was kind of my foot in to be considered and hired as their bassist. I was not a fan boy, I never owned any Katatonia posters. 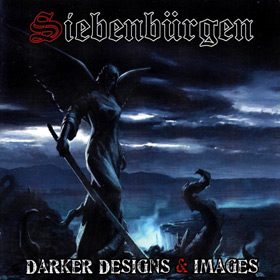 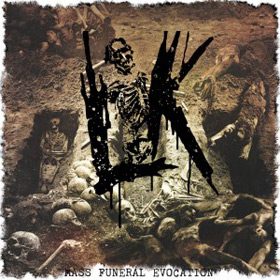 CrypticRock.com – Very interesting how all that worked out. You said you had not been on a proper tour before joining Katatonia, but you had played in other bands prior, such as Amaran and Siebenbürgen to name a few. Is it a totally different experience being part of Katatonia as opposed to the other bands you were in?

Niklas Sandin – In a way, you have 50 times more stage time per year than with the other bands. I think it’s pretty much the same thing. Of course it’s an industry, it’s an established band, record labels, management, and there is lots of other things happening around it.

Although, when it comes down to playing music, rehearsing, and playing live, I don’t think the experience is that much different, except that it’s of course more gigs and larger venues. This is not like some band that just meets once a year to rehearse or to communicate with each other. In the past, you keep it up, you meet a couple of times to rehearse, you make it fit, that I’m really happy about. Katatonia have not really slid out the musicianship, they are still a band which is really cool.

CrypticRock.com – That is great to hear. My last question for you is pertaining to film. If you are a fan of Horror or Sci-Fi films, do you have any favorites?

Niklas Sandin – That I am. Of course it is a cliché, but I really like The Exorcist (1973). I especially like the original without the revamped and remade special effects where they kept the tempo in the movie intact. Speaking about Science Fiction as well, when combining it with Horror, I really love Event Horizon (1997), that movie scares the shit out. The same with every time I watch The Exorcist, it is a movie that holds its own.

CrypticRock.com – Those are quality choices. Agreed about the 1998 re-released/re-edited edition of The Exorcist. Those extra scenes did not add much to the film.

Niklas Sandin – Yes, it made it more of a modern Horror film, which is more about visual than creating an eerie feeling. 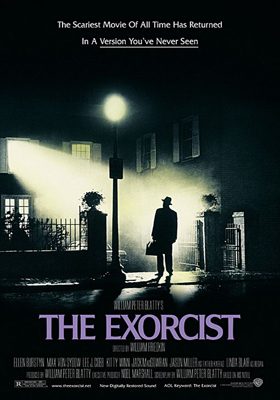 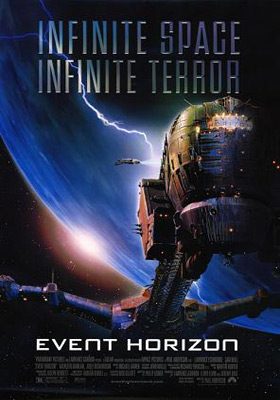 CrypticRock.com – Yes, with the original film, it was about building an atmosphere. It is a slow-moving film with a lot of dialogue, but there is an eerie feeling to it, making it more effective.

Niklas Sandin – Exactly, going back to the label fast food, if not, there would be too much grease in the being of the movie otherwise.