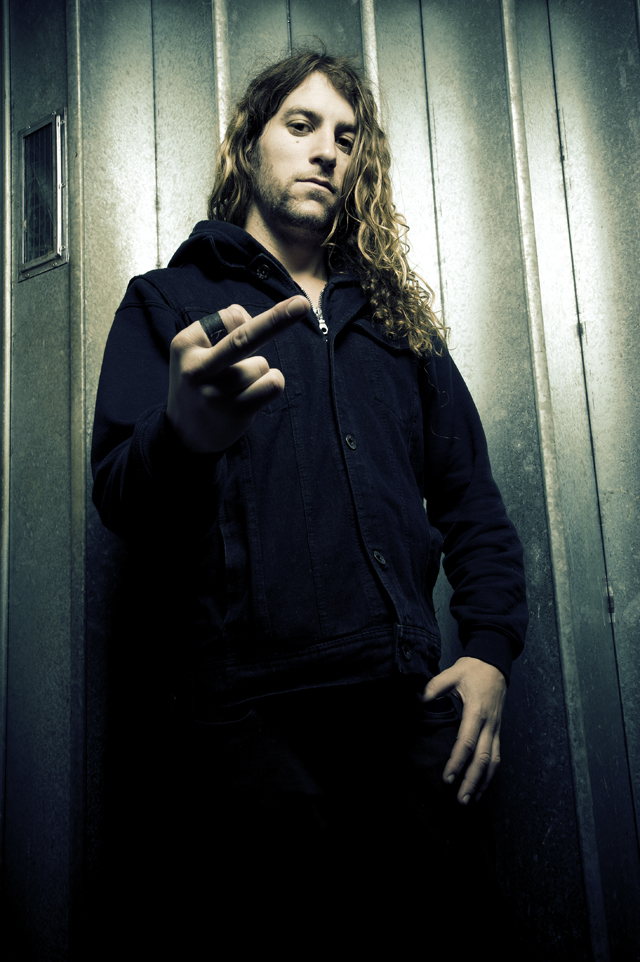 Thrash metal originated in the 1980’s with legendary bands such as Metallica, Slayer, Testament, Anthrax, Overkill among others. Over the years metal has morphed in many different sub genres. In the early 2000’s something interested happened in metal, thrash made a come back. One of the leaders of the new school of thrash metal include the talented Havok. Forming in 2004 in Denver Colorado the four piece thrashers are now 3 records deep into their career with their latest offering Unnatural Selection (2013). With a fast growing fan base, consist touring, and killer chops Havok is wreaking! Recently we sat down with Havok drummer Pete Webber for an in depth look at his joining the band, their latest record, and much more.

Crypticrock.com – Havok have now been together for nearly a decade. You guys have released 3 records now and with each album the band becomes more known and popular. How does the band feel about where you are at right now at this point in your career?

Pete Webber – I think we are doing well for ourselves. This tour is our first headline run and it’s cool to see everyone coming out and supporting the band. We really couldn’t ask for more from the fans. It’s really cool to see the band grow and the fans coming out.

Crypticrock.com – It definitely is getting more known and that’s a good thing. You joined the band in 2010 after the release of the band’s debut album Burn and a list of EP’s. What was it like for you to join a band that had already sort of been on their way for a while already? How was the chemistry at first? 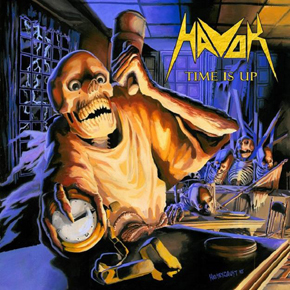 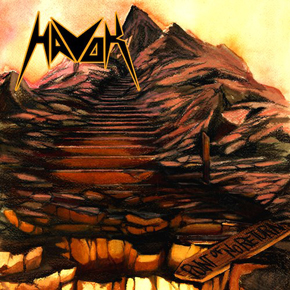 Pete Webber – It was cool. I graduated college and it was tough for me to find a job. I had been drumming since I was 5 years old so I figured I’d try and go back to music. I was lucky to find David’s ad online and hit them up and he sent me some videos and MP3’s and I videoed myself playing the songs and sent them back over. He was impressed and said if you move to Denver you can join the band (laughs). I went out there and David and his mother were very open and nice people. It was a very easy transition to join the band and it was good.

Crypticrock.com – Things have taken off since then. The band’s newest album Unnatural Selection was released back in June. It has received a very positive response from listeners. What was the writing and recording process like for this record?

Pete Webber – This one was a lot more collaborative. The stuff was 99% written by David before the others joined the band. Reece and I had a lot more say in this album writing process. That was good for us and a lot more rewarding as musicians. 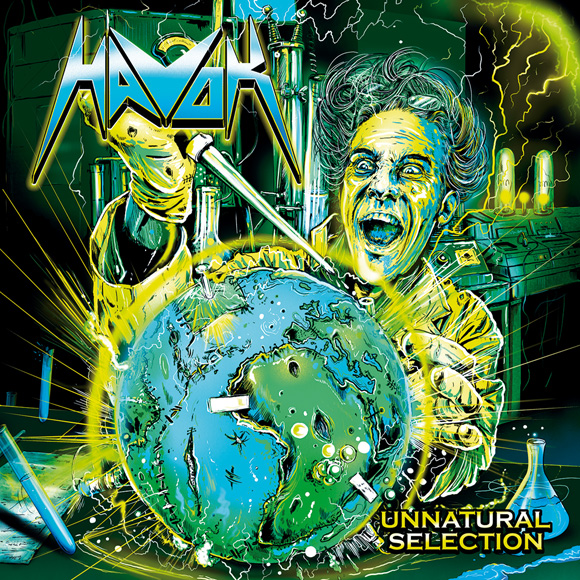 Crypticrock.com – That is good, a more collaborative process makes for more influences and makes for a better record. You guys are currently on tour until middle September. You definitely have proven to be road warriors. How is the tour going thus far and overall how difficult is it to be on the road so much?

Pete Webber – The tour has been going very well. We’ve been having packed clubs and people buying merchandise. It is difficult to be on the road so much but we enjoy playing live. At this point in music that is how you make your money is touring. You have to be on the road that much. All the shows are getting better and better every tour we do. It’s rewarding to see that and working hard is paying off. 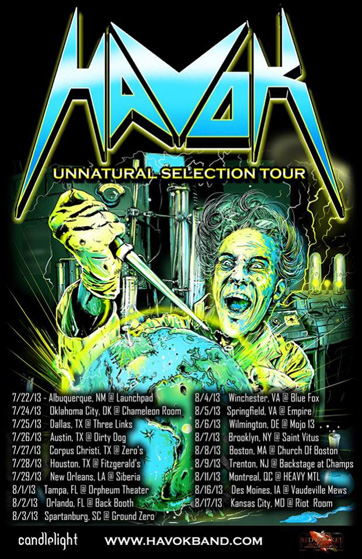 Crypticrock.com – Hard work always pays off. Shortly after the release of Unnatural Selection, the band went to Bogota, Colombia to play the Rock Al Parque festival, playing to an estimated 45,000 people. We all know how passionate Colombian people can be about metal. What was that experience like for the band?

Pete Webber – It was awesome man. Very rewarding as well. We couldn’t even walk 5 feet without having groups of people flock at us as well. It was pretty mind blowing to say the least. It was a real humbling experience for sure. To see all the fans there and the screaming. It was different for sure. I thought I was going to be really nervous playing in front of that many people, but it was just as easy as playing a small club. I don’t know why it ended up being like that for me. It was just awesome to see a sea of people screaming like that.

Crypticrock.com – It had to be an awesome and great experience. Also great for the band to get that type of exposure. It seems in the last decade there has been a sort of resurgence of classic thrash metal with yourselves and some other bands. Tell me what do you think ignited a revolution in the thrash metal scene?

Pete Webber – I think thrash metal is intense, aggressive, and the song writing is a little bit more rock n roll-ish. Rather than a lot of the new metal out here, which is blast beats and crazy guitar the whole song, and it’s kind of hard to listen to I think. I think people want to hear songs they can sing along to and remember, rather than this crazy drum and guitar part which they never come back to those parts (laughs). I feel like thrash metal has more roots in rock n roll and song writing.

Crypticrock.com –  I agree with thrash metal having more roots in rock n roll. It’s great to see so many young bands like yourself doing that classic style and see it coming back. With that said there are so many sub genres of metal now a days and so many different types of metal bands, what do you think of the metal scene in general right now in 2013?

Pete Webber – As far as main stream stuff, I am not that into it. There are a few bands out there I enjoy but as far as a whole, most of it is just noisy hard to listen to metal. I can’t really get into it unfortunately. Like you said there are more bands coming out there which are trying to get back to that classic sound which is good to see, it’s getting a little out of hand I think (laughs). 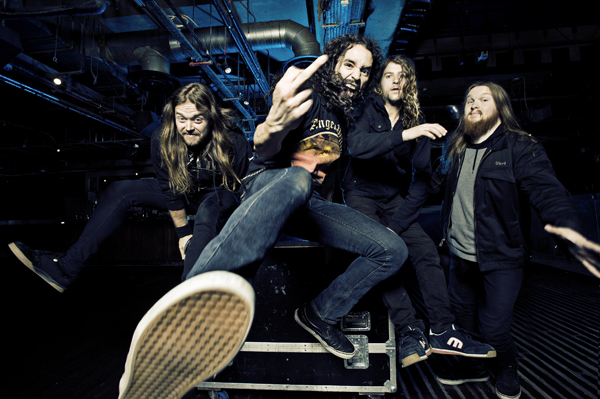 Crypticrock.com – Like you said there are a lot of bands out there where there is a lot of noise, and it’s hard to hear what’s going on. You’re drumming is fantastic. You said you have been drumming since your 5. Tell me a little about how you managed to reach to level you’re at in your drumming skills?

Pete Webber – I started when I was 5 and was lucky enough that my mom had a cousin who’s son didn’t use their drum set anymore. I got my first drum set at around 7 after it sat around their house for a few years. My parents noticed how interested and developing I was with it on my own, so I started to take lessons about 10 years old. I joined jazz band at school, had to read music, my teacher ended up teaching me latin, cuban, and all kinds of different genres of music. I developed that and also I used to cover my own drummer’s songs. That helps you develop your own style just covering over people’s stuff and seeing what you like. Playing heavy metal music is pretty physically enduring so I would just cover Pantera songs, old Sepultura, and just develop your own style from other players.

Pete Webber – Of course, I’d come home from school every day and play for hours until my parents would come home and tell me to shut up (laughs).

Crypticrock.com – (laughs) Well it has obviously paid off. What are some of your musical influences?

Crypticrock.com – Do you have a favorite band or album?

Pete Webber – I have been listening to Gojira lately. We got to see them in Arizona on our way home from the NAM convention in LA. That was really awesome because their drummer Mario is really good so it was cool to actually see them. I’d never seen them live.

Crypticrock.com – Gojira is a good band. I really like their sound too.

Pete Webber – Yea, they are one of the newer bands that I can actually get into. They still have good song writing and are not too crazy (laughs).

Crypticrock.com – Yes, they have a good mix of melody and clean vocals yet not too chaotic. My last question for you is regarding films. CrypticRock.com is a rock/metal and horror news site so we like to focus on all genres. Are you a fan of horror films and if so what are some of your favorite horror films?

Pete Webber – When I was younger I used to watch Jaws all the time. It’s still one of my favorite movies. Event Horizon was one of those movies that really scared the hell out of me when I first saw it. It was really creepy. I think that is probably one of my favorites for sure.

Crypticrock.com – So you like kind of the science fiction type horror then?

Pete Webber – Yes, I like all the Alien vs Predator stuff and all those types of movies.

Check Havok out tour with Soulfly this fall.  Dates are as follow: