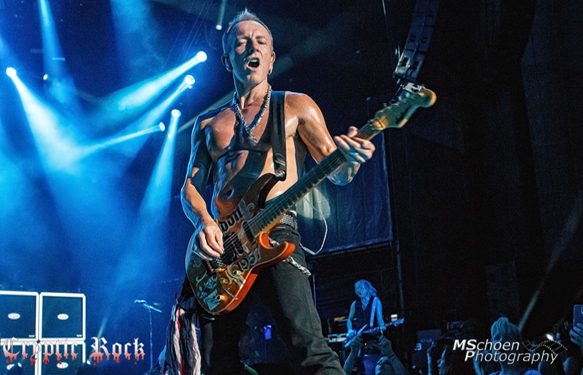 Some bands flair across the sky like a shooting star, while others such as Def Leppard burn on for decades. Coming together forty years ago in Sheffield, England, Def Leppard has built a legacy as one of Rock-n-Roll’s biggest success stories.

Filled with ups downs, triumphs and tribulations, Def Leppard has lived to tell the tale and are set to hit the road for another arena tour in the spring of 2017. Teaming up with Poison and Tesla, Def Leppard have plenty of excitement to offer fans. Recently we sat down with long-time Guitarist Phil Collen to talk the brotherhood that is Def Leppard, the forthcoming 30th anniversary of Hysteria, writing new music, and more.

CrypticRock.com – Last we spoke Def Leppard was set to release a very cool DVD/CD live set, And There Will Be A Next Time – Live From Detroit. Now the band is drawing closer to their tour with Poison and Tesla. You had said you were looking forward to it as it approached. What inspired the band to pick some different venues and cities this time around?

Phil Collen – When you ever talk to fans they say, “How come you didn’t come to my town?” That is why we are doing this tour…exactly that (laughs). They say “you skipped this, you haven’t been here in 20 years,” so we are getting them in. It is really cool because we do a lot of the same cities all the time. It is really cool into secondary markets.

CrypticRock.com – Absolutely. One of the venues which are playing is Nassau Coliseum in Uniondale, New York. Def Leppard has some history at the venue, including a show back in 1993. This is now a newly renovated venue set to reopen soon. Have you had a sneak peek at what the new coliseum looks like or will it be a surprise to you as well?

Phil Collen – No, it will be a surprise! It will be really cool to go back. I haven’t seen it yet so it will be a lot of fun. 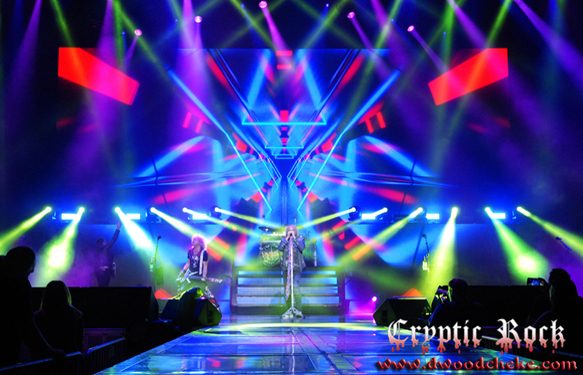 CrypticRock.com – Yes, it should be exciting and Def Leppard will be one of the first shows after the re-opening. We had spoken about some of Def Leppard’s history and present. Speaking of, Hysteria will actually be turning thirty in August. An essential Rock album, Hysteria has attained mega success. What do you think made the album as magical as it was?

Phil Collen – The fact that Mutt Lange said, “Ok, everyone is making Pyromania part 2, so we really can’t do that.” He said, “you have to raise the bar, push the boat out a little further.” We used different influences. Rap just started become really popular with Run DMC and such. “Pour Some Sugar on Me” was kind of based on that. The rapid fire was really Hip Hop. There were just different influences on the album such as The Police, Prince, Billy Idol, and Frankie Goes To Hollywood.

It wasn’t just a Rock thing, we really moved away from being just a Rock band and tried to get a whole new genre. It is more in line with Duran Duran than say Metallica. That was a really cool think that we did, it made Rock music mainstream big time.Everyone copied it after that, as they did with Pyromania. It influenced so many different kind of artists, not just Rock bands. It moved Rock kind of like Shania Twain did with Country. I remember hearing her music in an elevator in Japan. To hear Country in Japan is a big thing. A similar thing happened with us and think that was it.

CrypticRock.com – You are right, Hysteria was really a crossover for Def Leppard and the Rock genre. Will there be any special plans to celebrate the 30th anniversary of Hysteria?

Phil Collen – Yea, we celebrate it every night up on stage. We celebrate Steve Clarke as well. We will be releasing a special edition of Hysteria with different bonus tracks and all sorts of stuff. It is probably my favorite Def Leppard album. It pushed all the barriers. I remember when we finished the record with Steve Clarke and I sitting there listening to it and said, “You know what, this is the pinnacle of our career. If no one buys it, even if just our parents buy it, we are happy and have succeeded.” Even though it costed us five million dollars and we are in this huge debt, we achieved something just by finishing it and it sounding the way it did. It was wonderful. 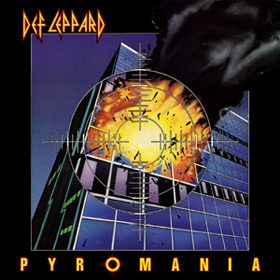 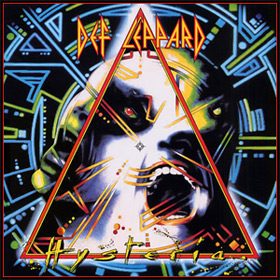 CrypticRock.com – Absolutely. It did not do bad, a few people bought that record (laughs).

Phil Collen – Yes, you are absolutely right. Hysteria finally did make money back.

CrypticRock.com – No question, it is a landmark of the ’80s  and Def Leppard’s career. Def Leppard has kept the same lineup strong now for over two decades following the joining of Vivian Campbell. What do you think has been the key to the band’s chemistry together?

Phil Collen – That is just the game. You don’t change your family out – you don’t say, “Ok, my brother is gone, let’s go get another brother.” You just don’t do that. We have been through all these things together, births, deaths, marriages, divorces. We have been together longer than any family members.

I have spent more time with Joe Elliott in my life than with my mom and dad combined. We spend all the time on the tour buses, etc, and when you take that into play, you are all on the same page and you all have an agenda. It has to be otherwise it doesn’t really work. Unless something happens, like what happened to Steve was obviously tragic. We had to do something about that, and that is why Vivian came in. It is not a revolving door like you see with a lot of bands.

CrypticRock.com – Right, that is why it is really spectacular to see Def Leppard is really a family. You do see a lot of bands that have a revolving door of members, Def Leppard is not like that.

Phil Collen – Yes, we have a concept more than anything else. That is really important to us. Sure if you are a musician and you want to try different things with different people, but you are artist, that is a different thing. The artist in this case is Def Leppard and we are all part of that. You don’t change the ingredients. For example, if you are Prince, there is nothing you can do to change that ingredient, he is the artist. In this case it is Def Leppard and we have to remain faithful to that. 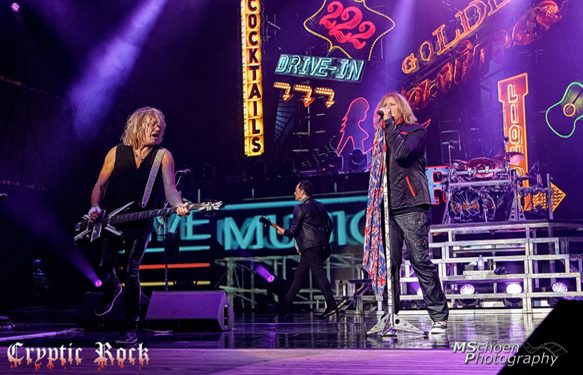 CrypticRock.com – Yes and Def Leppard has done an exceptional job of that. ‘The band’s 2015 album really was a fantastic piece of work and clearly the product of not feeling pressured to put something out. You had said creation is not something that can be forced. Since we last spoke, as there been any develops in some new Def Leppard material?

Phil Collen – Yes, funny enough Rick Savage sent me a song recently. It is really awesome and I can’t wait to get my teeth into it. I have ideas, I am constantly writing. I just literally finished the new Tesla album. I actually joined the band for that. I wrote with the guys on every song. I am thrilled about it, it sounds like a cross between Queen, The Beatles, Led Zeppelin. If you could imagine all of that, including classic Aerosmith, it has images of all that stuff, but it sounds like Tesla. We are thrilled with that.

I think you have to be writing songs. We just started writing new songs for a new Delta Deep album. Same deal, but very different songs. If you an artist it just keeps firing all the time, you just have to direct which way it wants to go. As I said, I am really pleased about the Tesla album. It is just being mixed now, a lot of fun there.

CrypticRock.com – It sounds like there is a lot of good things going on. With Delta Deep, can we expect some shows in between your time with Def Leppard?

Phil Collen – Yes. It is always hard to pin everyone down because there are four people in the band. Yes we will be doing something at some point for sure.

CrypticRock.com – Great to hear. Last we spoke you had said you were actually a pretty big movie fan, and enjoyed Horror and Sci-Fi. Have you seen any new films that you enjoyed?

Phil Collen – Absolutely. I recently saw Logan and Kong: Skull Island. Kong: Skull Island was amazing, it was killer. It was one of the better King Kong movies they have made since the original. I am really looking forward to Alien: Covenant. I keep seeing clips of that and it looks more in line with the scary alien so that is pretty exciting. 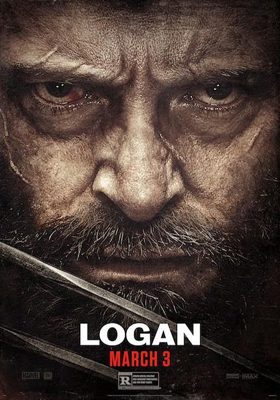 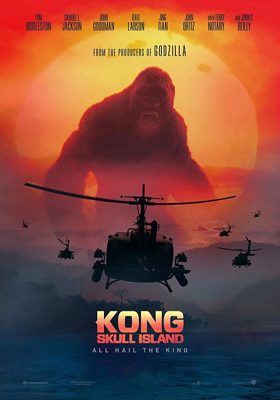