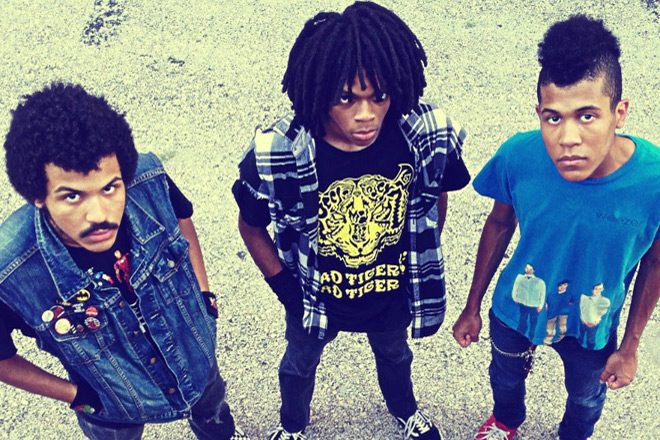 In 2010, a literal band of brothers was born in St. Joseph, Missouri. Three brothers found an outlet for their creativity in their music while being homeschooled. The brothers Radkey decided to form a band, and, with the support of their parents, began a journey to achieve their dreams and share the Rock-n-Roll in their hearts. So, Radkey was born, and since then, the brothers – Isaiah, Dee, and Solomon – have been chasing their dreams and shared stages with some of rock’s biggest names like Fishbone, Local H, and The Offspring. The band re-released their 2015 LP, Dark Black Makeup, as Delicious Rock Noise on November 11, 2016 with added tracks. At Carolina Rebellion 2017, we got a chance to sit down with the guys and talk to them about releasing the new album, the implications of being labeled a Punk band, and other creative outlets they enjoy in their off time.

CrypticRock.com – Starting out, how has this year been going for you and the band so far with the release of 2016’s Delicious Rock Noise?

Isaiah Radke – It has been so cool! It’s nice, people have been really digging the record. That means everything to us.

CrypticRock.com – Very cool! Delicious Rock Noise is in fact 2015’s Dark Black Makeup. That said, how has the reception been for the re-release?

Isaiah Radke – It’s been good. Delicious Rock Noise is a more powerful version of the other one because that one (Dark Black Makeup) didn’t get around much. We felt like it had a lot of life still in it, so we said, “Yeah, let’s put it out, ya know, with a better title and a couple more tracks.” 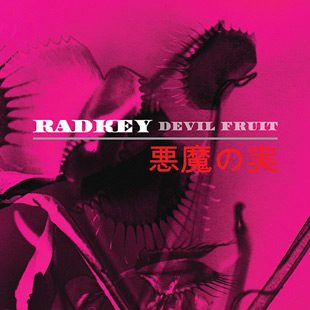 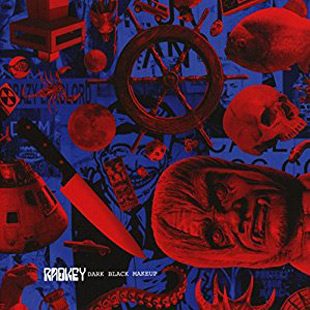 CrypticRock.com – Alright, very nice. Tell us more about your creative process and what goes into writing an album for you.

Isaiah Radke – It’s a lot of things. We like to experiment with a lot of different things. We like to jam a lot and do like gibberish over it. Then I’ll go back and listen to it and write lyrics. We’ve been trying a lot of other stuff though. Like some songs start out really good acoustically that are Hard Rock songs, but you would never know that they started that way. We just started experimenting with that recently. There’s so many different ways to do it.

CrypticRock.com – Awesome! So when it comes to jam sessions, who is usually the instigator? Who usually kicks things off?

Isaiah Radke – It’s Dee. Dee’s the guy for that. 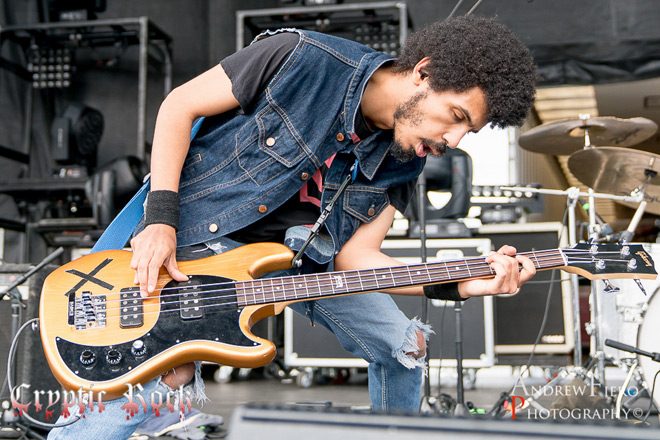 CrypticRock.com – So, Dee what starts that?

Dee Radke – I don’t know, just pick it up and start going. Whatever sounds good to everyone, we’ll start riffing off that for awhile. If it’s not gigging, then we move on.

CrypticRock.com – Ok, cool. What is the editing process like then? Once you have some things down, how do you sort through it all?

Isaiah Radke – (laughs) Yeah, which you know is always the case. 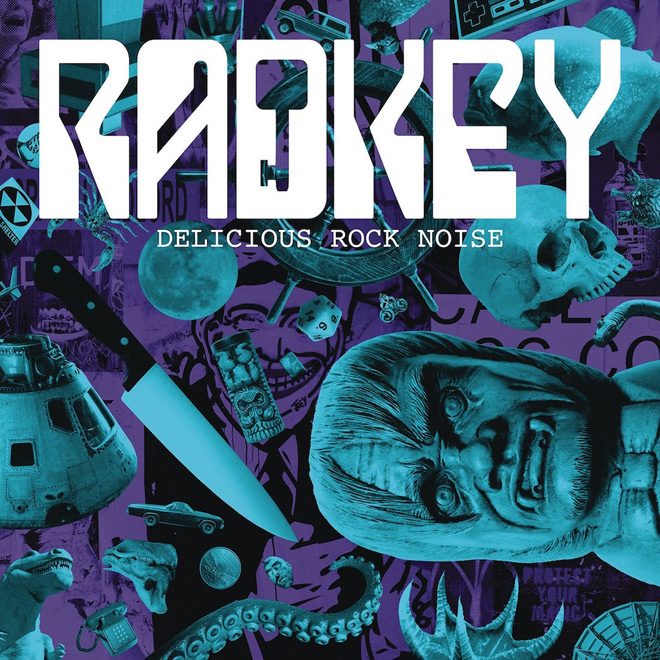 CrypticRock.com- Nice! (laughs) So, beyond your family, who have been the biggest supporters of your career so far?

Isaiah Radke – It’s been cool. Our management has been great. You know, our dad’s our manager, and our managers, Steve and Andy, they pretty much push us through. Also, we get to meet cool bands and they’re really supportive. So yeah, it’s pretty cool.

CrypticRock.com – That is great! Now you guys tend to get grouped in genre-wise to the Garage Rock/Punk category. Punk has always been a very socially and politically charged movement.

CrypticRock.com – How politically or socially active are you guys? How do you feel being African American men in the current political climate?

Isaiah Radke – Yeah, it definitely sucks in the current political climate. We’re not gonna joke about that right now. Yeah, I don’t know. We like to consider ourselves a Rock band, but Punk is cool because Punk is doing whatever you want. That’s what we do. So, that’s Punk, but even with politics, we’re not like political, at all; but when it comes to this, it’s not about politics, it’s about right and wrong. So, you can’t be a guy who’s not about politics right now, because it’s just good and evil. You can’t hide. You gotta look at stuff.

CrypticRock.com – Very true. We should all be paying attention. So, what can we expect from you guys on the next album?

Isaiah Radke – The best thing I can say, a little less groovy, but all the Rock, all the catchiness, and all the Radkey style. Maybe some new stuff too! The only thing we’re good on is the (vocalizes deep downbeats) “dun da-dun-da-duunn!” (laughs) We’re good on that. You got a whole album of that and it’ll stay in the sets. You can’t repeat yourself, that’s very important. That album was very “stoner-y” and very heavy, ya know? So, we’re just not gonna do that again. We’re gonna do something different, but still Rock! 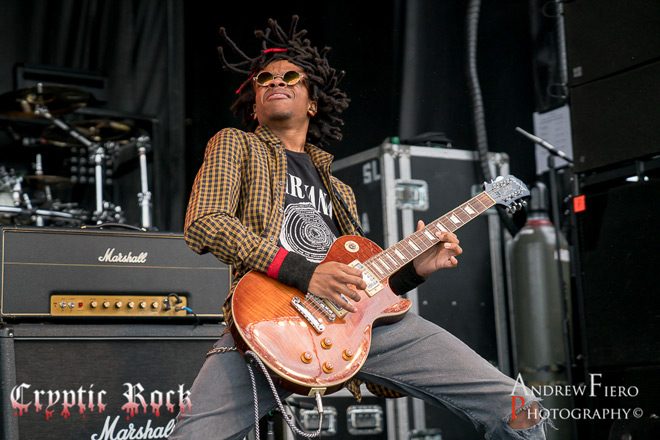 Isaiah Radke – Maybe one “chuggy” one. (all laugh)

CrypticRock.com – Hey, there are a few stoners who really like that album! You got a lot of fans from that! By all means, chug away! (laughs)

CrypticRock.com – Beyond music, what other creative mediums do you use to express yourself?

Isaiah Radke – We have movies and video games and stuff. Plus we’re into Anime really hardcore, and comic books, and that’s pretty much what we do whenever we’re not doing music.

CrypticRock.com – What is your favorite Anime? 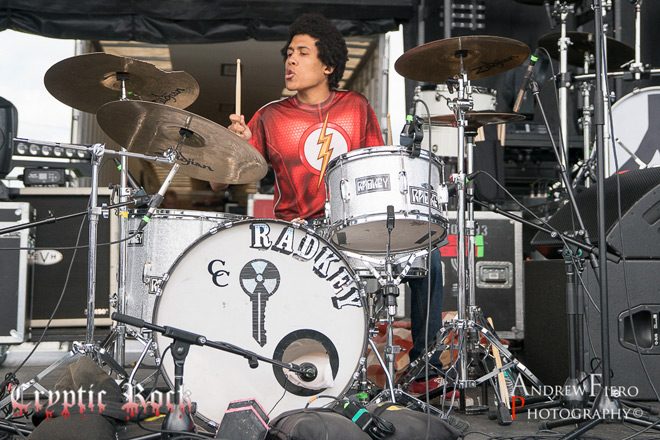 Isaiah Radke – Actually, that’s my favorite. My favorite currently running Anime is One Piece, but Cowboy Bebop is my straight up favorite.

Dee Radke – I gotta say Fooly Cooly is my favorite.

CrypticRock.com – All great choices! Now, at CrypticRock, we also cover Sci-Fi and Horror. So, if you have a favorite movie in either genre, what is it? 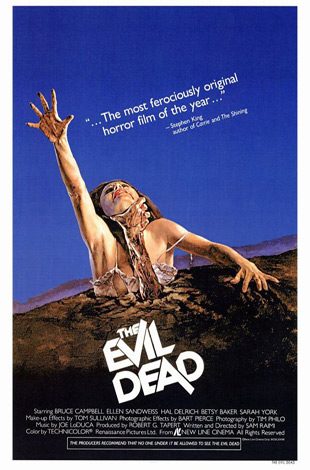 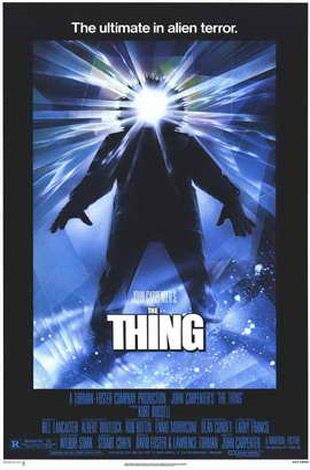 CrypticRock.com – That is also a great movie!

Isaiah Radke – Yeah, but it’s fucked up! Have you ever been high when that movie came on? It is not cool (laughs). I thought the Evil Dead (2013) remake was really chill. The Cabin In The Woods (2011) we all love. I love that the stoner’s the hero and it’s because he’s a stoner! Yeah!