Interview – Terry Alexander of Day of the Dead

April 3, 2015 Interview – Terry Alexander of Day of the Dead

As the culture of America changes throughout history one of the many pronounced progressions has been the development of African American actors in cinema. One such actor who has been a part of the revolution was Terry Alexander. With roots in the Midwest, Alexander became best known for his portrayal of John in George A. Romero’s 1985 classic Day of The Dead, but began his career two decades earlier with various role in television. A part of the Broadway production, No Place to Be Someone , the first African American play to win a Pulitzer, Alexander’s career was been decorated with many colorful achievements along the way. Recently we sat down with the diverse actor to talk about his time on the set of Day of the Dead, his career as an actor, working in television vs feature films, and more.

CrypticRock.com – Your acting career began some five decades ago.  Through the years, you have starred in a list of popular television series and, in 1985, you landed a lead role as John in George A. Romero’s Day of The Dead.  How did this role come about for yourself?

Terry Alexander – I heard they were looking for someone to be in a George Romero movie and he wanted someone who could do a Caribbean accent.  I said, “I can do that.” He handed me a monologue and it was so fantastic.  I told him, “George, you have to give me overnight on this, I have to sleep on it and dream about it.” He said ok, and directors usually do not say that. It was a wonderful experience right there.  So I came back the next day and I did the monologue for him. He so enjoyed it and he said, “I am going to call your agent.”  That is what happened.

CrypticRock.com –  That is a pretty cool story. With the role of John, you played a very laid back, sometimes indifferent, but very likeable character.  What do you think the key was to making John such an interesting and likeable character?

Terry Alexander – I thought maybe I should make that choice, make him a little more laid back, instead of being aggressive.  There is something about being in a dark cave and being a Caribbean character that makes you yearn for the sun. I had a little power too as the character, because no one knew how to operate that helicopter besides me, so I could be laid back.  I made that choice specifically.

CrypticRock.com – Yes, even though he was indifferent as stated, he was very likeable. Perhaps some of the most important striking scenes in any film are primarily dialogue.  In Day of The Dead, you had perhaps one of the most riveting and attention grabbing dialogue scenes when you are talking to Sarah about history, etc.  What was it like for you to act out that scene?

Terry Alexander – It was wonderful, I auditioned with that scene.  I never got back to doing it until the almost last day of the shoot. I had an incredible amount of time to play with it and study it. When it finally got there, I did it, George and everyone loved it.  Then we all got sick after we did that scene. The cave was incredible, there was so much limestone dust in the air.  That was the first and last thing we did together.

CrypticRock.com – That is a very thought provoking scene.  It is also very frightening and the words are striking.

Terry Alexander – George put it physically in there.  He cut back the movie a lot, they made him re-write it because they did not have the money for all the special effects. So, he cut it back and he put that monologue in there to say what he wanted to say.  He also did not want me to be preachy, so that was another reason I was laid back.

Lori Cardille & Terry Alexander in Day of the Dead (1985)

CrypticRock.com – Yes, you did a great job with that. Considering the fact that 90% of the film is shot underground, what was that working environment like in the time of making the film?

Terry Alexander – Bats were flying around all the time and it was cold all the time.  Some of the special effects, back then, took forever. We had to wait about an hour to set things up.  Then it was time to go to work, it was time to start up that energy.  It worked though.

CrypticRock.com – Wow, that sounds like a long wait.  Many actors have said a lot of the work with acting is waiting. There certainly seemed to be a unique chemistry between yourself, Sarah, and McDermott throughout the film.  What was the morale like between yourselves on and off the set of the film?

Terry Alexander – Well we were societal outcasts. Women always have a harder time than men in society.  That element just kind of made us hang together with the social commentary.  Movies are strange because you are always alone in movies.  You have to do your close-ups by yourself, it is an alone kind of trip.  So we blended together, spoke a bit, nobody went to dinner a lot. We just saved all that familiarity for when knew we could be open. That is the art of what you do as an actor. We seemed so close together, we seemed like we lived together in that cave, but that is our magic, that is our mystique.

CrypticRock.com – Absolutely, and everyone did a great job. You were the laid back character, Sarah was strong-willed, McDermott was a bit of the drunk. So each character had their qualities which endured for the audience. Character development is essential for a film.

Terry Alexander – Exactly, there is nothing redemptive then, we need redemption. There was a lot of philosophy I liked talking about. I truly did not think that one scene would make it in the movie, because it was a monologue.

CrypticRock.com – Well it made it, and it worked. Now, after Day of the Dead you starred in another Horror film in 1989 titled The Horror Show and then went on to star in some other films over the years, but predominantly have spent a lot of time acting in TV.  What do you think the major differences are between roles on TV opposed to feature films?

Terry Alexander – Television is amazing, it is quick, it is quick study. Some of the guys, they can pick up script and pow. For me, I have to sleep with it, I have to dream about.  Films are a lot different, because you get more time. They shoot at different angles, it is a little different each time.  TV is fast though, run and gun. That is the difference.  That is why the quality in movies is better. It is just more profound.

CrypticRock.com – Yes, you are right.  It does seem though that, in modern days, shows like The Walking Dead and Breaking Bad allow character development further. In many ways, television seems to have surpassed feature films.

Terry Alexander – Yes, you can stream a lot now too. Streaming can go without commercials.  You can see the construction in television series and in the writing much better.  That is what TV is built for though, it is built for selling.

CrypticRock.com – That is very true. What are some of your influences as an actor?

Terry Alexander – I watch a number of actors work. I will go see a Brad Pitt movie, I do not care what he is doing, just to watch him work with the camera.  I came from a kind of phase in history where there was not much happening for African American actors at the time. To watch it all change and grow has been brilliant for me.  I am one of those kind of actors who watches people and nuances. I take my characters from that kind of thing. Guys lucky enough to get stardom, they can take six months to work on a character, because they will know what they will be doing in six months.  I never had the luxury.  That is when you can get really thorough. Like I said, television is always rush rush. I like Soap Opera’s because I spent years doing them.  They are good because they are always overwritten.  They are always overwritten so they have to cut back. They are redundant though and people do not like that stuff.

CrypticRock.com – Well, there is definitely an audience for Soap Operas.

Terry Alexander – Yes there is. A fire was raging in my building once. We all had to get out of the building and I was coming down the stairs and a fireman stopped me and said you were in One Life To Live. I said the building is burning, let me get out of here (laughs).

CrypticRock.com – (laughs) That is a funny story. A lot has changed in the industry since you started.

Terry Alexander – A bunch has changed. My second production on Broadway was a play called No Place to Be Somebody. That was the first African American play to win a Pulitzer, that was in 1970. Since then, genres have mixed and changed. Ethic expressions have broadened and become larger.  It is really cool. America’s changing, America’s evolving.  We are in a struggle right now, but we have to get through the struggle. We cannot just change, it takes time. That is what is happening to the country, it is amazing and wonderful.

CrypticRock.com – Yes, things take a long time for change. If you look at how long humans have been here opposed to the age of the planet. We have made great strides as humans.

Terry Alexander – Yes, incredible strides. Dinosaurs were here around one-hundred and sixty five million years, we have been here thirty seconds compared to that. People do not realize how special that is. I talk about it all the time as much as I can and try to be positive.

CrypticRock.com – Absolutely, totally agreed. My last question for you is regarding films.  CrypticRock.com is a music and Horror news site, so we like to focus on all genres.  Are you a fan of Horror films, and if so, what are some of your favorite Horror films?

Purchase Day of the Dead:

Terry Alexander will be appearing at Cinema Wasteland Movie and Memorabilia Expo April 10th-12th. Check out the detail: 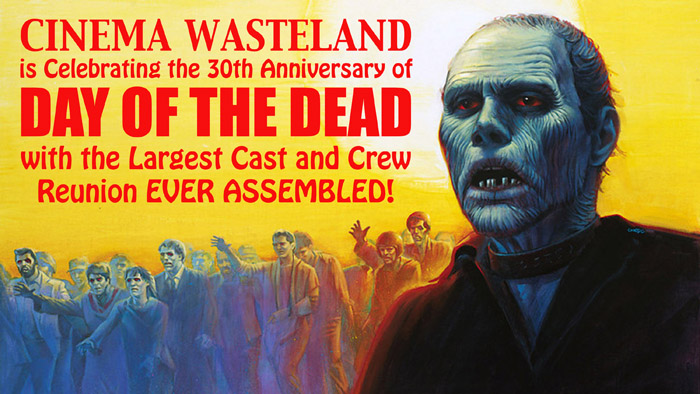