When creating a list of key collaborators in the timeline of Iggy Pop, chances are David Bowie is one of the first to come to mind. A logical selection, he is one of many who has joined up with Pop through the years. However, another important figure to do is Guitarist/Songwriter James Williamson.

Joining Pop and The Stooges in 1970, Williamson would offer significant songwriting contributions to the band’s 1973 album, Raw Power. Going onto to work with The Stooges until their split, Williamson would also team with Pop for solo works including 1977’s Kill City and 1979’s New Values.

Known for his raw, energetic guitar style, interestingly enough, Williamson put down the instrument around 1980 to embark on a life changing career in computers. Seemingly the end of his stint in music, fortunately for many, he returned to The Stooges for a reunion in 2009, and has continued to find inspiration in various projects since. Most recently teaming with Radio Birdman’s Deniz Tek for some new, original music, Williamson sat down to talk about the experience, his time with The Stooges, altering his life path, plus much more.

Cryptic Rock – Your career in music dates back over 50 years. Accomplishing a lot, you were an intricate part of The Stooges, continued to collaborate with Iggy Pop thereafter, and have also worked as a producer. Throughout everything, briefly tell us, how would you describe your journey in music?

James Williamson – I would describe my journey as part serendipity and part hard work. Sometimes it is just the right place, right time. It is like anything else: you put in the work, but sometimes you get lucky.

Cryptic Rock – And you did put in a lot of hard work. As mentioned, you came on as a member of The Stooges and played a big part in the co-writing of 1973’s Raw Power, as well as other albums. What was that time like for you as a songwriter and performer?

James Williamson – First of all, Raw Power was my first album. I was just thrilled for the opportunity to do an album. I had always written my own songs coming up as a self-taught guitar player. It was much easier for me to write my own songs rather than learn somebody else’s song. That lent itself to my style which I developed, and it was a very emotional style coming up as a teen.

Writing the songs for Raw Power was the same thing: I just wanted to make this record. I just worked and worked on making new tunes. I would write them up in my room; we lived in a little Mews house in Chelsea, London. There wasn’t a lot of distance for us to be banging electric guitars there so I wrote the songs on an acoustic guitar. If I liked them well enough that I could stand to play them 2-3 times, I would bring them in front of Iggy to see if he liked them too. Usually he would like them if I liked them that well. He would then put vocals/words on them, and that is kind of how we wrote them all.

Cryptic Rock – Wow, and now the album is iconic. You had actually stepped away from music for many years before returning to reunite with The Stooges back in 2009. In your time away from music you went into a career of technology. What was it like returning to music after such a long gap of time?

James Williamson – First of all, I didn’t regret moving away from music into technology. Technology has been the most amazing ride in this period of time that you could imagine. It was also time to do something else.

It was an interesting proposal that I come back and play in the band. I hadn’t played my guitar in 30 something years, so I had to re-learn it. That is something; if you could ever do it, you can do it again. The other good thing was I had several months before we actually had our first gig. It was many months down the line, so I did work hard and got back to doing it.

It was fun and different for me after all those years in tech. The really strange part about it was our first show was in front of something like 40,000 people. You have to remember that not many people liked The Stooges back in the day, so our biggest show back then was maybe 2,000 people. It was over the course of those years that we became very popular and the shows were huge. In fact, 40,000 people ended up being one of the smaller shows. It was waking up as Rip Van Winkle – a lot of stuff happened while I was away. (Laughs) I got used to it after a while. We spent around 4-5 years doing it and I got the hang of it.

Cryptic Rock – That is pretty crazy. You said you did not regret stepping away from music to go into technology. You found success there, as well, but at that time you made the decision to step away, was it a scary proposition to leave music?

James Williamson – There were times where it was, of course. The strangest part about it for me was I had already done a lot of stuff. I had already gone to a foreign country and lived there for a year. I had also run into a lot of situations while playing for The Stooges, as you could imagine. First, I had to get an electrical engineering degree. I had to go to school with a lot of people who were very nose to the grindstone. I had to learn calculus and differential equations. As I said before, this was a huge extensional gap for a guy who was in The Stooges. (Laughs)

I had worked hard and I had a real motivation to do it too. What had attracted me to it in the first place was when I started working in recording studios, but I found out I wasn’t cut out for that very much. What I did see there was my first personal computer, which in those days were very primitive compared to today. It was amazing though, I hadn’t seen anything like it, in fact there hadn’t been anything like it. I was really taken by the technology and wanted to do it. It was difficult sometimes and a little scary. I was then offered my first position in Silicon Valley and I’ve been here ever since. It has been a great ride.

Cryptic Rock – It is extremely compelling to hear how these two very different careers have worked for you. Since your return to music you have been a part of various projects and have a new collaborative album with Deniz Tek coming out on September 18th. What brought this new project together?

James Williamson – I had done several sessions for Cleopatra Records. I had done a Mitch Ryder session redoing “Devil with a Blue Dress On,” a Cherie Currie session redoing “Leader of the Pack,” a Robert Gordon and even a David Hasselhoff thing. I got used to working with them and Matt Green, who is their VP of acquisitions at Cleopatra Records, asked me. I had done an acoustic EP with Deniz Tek before. Matt Green liked what we did, and wondered if we could do an electric version of something with each other.

I mulled it over and asked Deniz what he thought about it; of course, I know him and we have both spent a fair amount of time in Hawaii. We decided, what the hell, let’s do it! That is really what got us started. It took us awhile to get going on it, because we both have various different things going on. Eventually we got up enough tunes to do it and recorded it late last year.

We got all the vocals done, then I brought it back to California to mix it, and just finished getting it mixed when COVID-19 hit. That kind of stopped everything, and unfortunately the guy I would have had master it was unavailable due to COVID. Luckily Cleopatra Records had connections with a guy who could master it, and he did a really good job of it. They have moved ahead and have been able to get it through the pressing process.

It has moved right along. This is whereas a lot of others bands, who have wanted to go out on tour in support of an album, have paused their releases. We have been fortunate in that regard and I am very happy about how the album turned out.

Cryptic Rock – It came out very well. The album is called Two To One and is very guitar-driven. What was it like working with Deniz?

James Williamson – It is very easy for us to work together. Even though he is a little bit younger than I am, we have very similar experiences in some ways. He lived in Ann Arbor, Michigan for some time and I spent some time there. Of course we both spent some time in Detroit, and we know a lot of the same people; Deniz was also a friend of Ron Asheton. Although Deniz had a lot of time he spent in Australia, we have enough commonality that we’re coming from the same place.

The biggest problem with making a record is people’s tastes. In this case our tastes were very similar. It was quite easy for me to produce the album, we didn’t headbutt or anything like. We had fun doing it and I think everybody who played on the album had fun doing it, which is also really important. It went so smoothly it was almost amazing to us. (Laughs)

Cryptic Rock – It is a fun listen and has a really raw, Rock-n-Roll tone. That in mind, a lot of albums recorded/mastered nowadays are very polished due to technology. Was it important to you to keep that rawness?

James Williamson – It was. I figured that was what we were going to shoot for, an old fashion guitar album. Nick Stein was the engineer we used, he’s a good friend as well. We were shooting for the real deal and no phony production. I wanted to have that sound that I’m known for. Also, Deniz has his own sound as well. The combination of the two I think really works well together. It is what it’s supposed to be: a good old fashion guitar album.

Cryptic Rock – It certainly is that, and it sounds great! Obviously many things are at a standstill right now with COVID-19, but is there the possibility of you touring for this album in 2021?

James Williamson – Well, I never say never, but I’ve pretty much hung up my tour shoes. I’m just not in the same place anymore. I’ve toured a lot. I don’t really feel like I’m going to do it, but you never know.

Deniz still tours, and there is no reason why he can’t tour this album himself. He’s the singer and he can play guitar. That’s a possibility too. We’ll just have to see – I’ve been known to change my mind. (Laughs) I don’t even know when this COVID situation is going to be over, let’s get that far first.

Cryptic Rock – Yes, it is a very uncertain time. Last question for you. If you are a fan of Horror or Sci-Fi films, do you have any favorites?

James Williamson – I like all the old Boris Karloff stuff from the golden years of Horror. I’m not really all that current on Horror films. I tend to like Indie films more. I also like the kind of odd films like Freaks (1932). I’m eclectic that way. 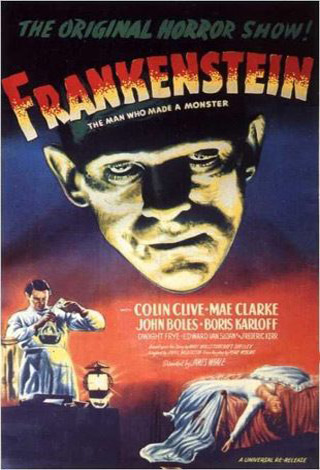