Thus far, 2020 has proven to be an extraordinarily challenging year for the world we live in. Luckily, we have our families, friends, and the things we enjoy in life to help us through. With so much being thrown at us right now, there is as much negativity as there is positivity to go along with the ongoing political and social climates that have been getting hotter and hotter for years now. At least we know the one that cannot be distanced is our voice, especially through music.

In 2018, Boston, Massachusetts based Metalcore band Unearth celebrated 20 years of having something to say and being the real deal in terms of their music. In November of 2018, Unearth released the LP entitled Extinction(s). A brutal and honest record, Extinction(s) delivered what is arguably Unearth’s most aggressive and compelling album to date.

After two decades, Unearth have solidified themselves as Metalcore titans who will do everything they can to reach a global audience with music that will always convey an important message. As the dominant voice of Unearth, Vocalist Trevor Phipps recently sat down to discuss the experience of playing music for a living and how their music can create change in our world.

Cryptic Rock – It has been 20 years since Unearth’s formation. What has the last two decades meant to the band?

Trevor Phipps – It’s meant everything to us to be able to write, record, and tour the world playing our songs for people. We’ve lived many lifetimes worth of experiences from our travels and it will never get old or tiring.  This is what we set out to do when we formed in 1998, and we have been living it ever since.

Cryptic Rock – That sounds like an incredible life! The die-hard fans who show up every night must make it all worthwhile. Speaking of, over the years, Unearth has built a loyal fan base and earned well-deserved success on the charts without the help from mainstream formats. How does it feel?

Trevor Phipps – Our goal from the beginning was to stay heavy, never compromising our sound, and push the brand as far as possible. Twenty-two years later and a career that has consistently brought us to six continents to play our music for people is everything we ever wanted. We continue to push ourselves as songwriters and players to further our brand for both us and the fans. The goal remains the same and there’s a long way to go to the top.

Cryptic Rock – Staying true to who you are is the most important aspect in creating music. Speaking of new music, fans were excited to hear Unearth’s new album, Extinction(s), when it arrived back in late 2018. As the band’s seventh studio album, Extinction(s) comes in as arguably Unearth’s most raw and heaviest material to date. Tell us, when writing your first album in four years, where was all this defiance channeled from?

Trevor Phipps – I think both the long term environmental and economic uncertainties everyone faces and the many political and moral divisions we have in the world today gave us a sense of urgency when writing this album.  Lyrically, I’m doing my best to point out the wrongs in the world while also trying to unite the masses. We need to focus less on our subtle differences while focusing more on the greater good for humanity, the planet, and the species we share the planet with. Without that harmony we will see more deaths from disease, starvation, and poverty to humans, and countless species will become extinct.

It’s been almost two years since I wrote the lyrics to the “Extinction(s)” album and it’s all happening right before our eyes.  It’s not too late to turn it around and I hope we collectively reject our dependence on fossil fuels and force elected officials and businesses to turn their focus to renewable and cleaner energy sources.

Cryptic Rock – It is fantastic that you are so outspoken and passionate about these issues, and that you utilize your music as a source for reaching folks in times like these. Looking beyond your most recent work, if you could choose one, what do you feel is Unearth’s most important album?

Trevor Phipps – The Oncoming Storm made the biggest impact on fans around the world and our lives. Without the success of that record we might not have reached a level where we could rely on this as our career, so our lives would likely be much different today if that record was never written. Many of the songs from that album remain staples in our live set, and lyrically many of the songs are relevant to what’s happening today (“The Great Dividers,” “This Lying World,” “Predetermined Sky”).

Cryptic Rock – Awesome. In terms of influence, what band/artist has made the biggest impact on Unearth’s music?

Trevor Phipps – We are really all over the spectrum with heavy music influences ranging from Punk to the heaviest Grind/Death. Our sound is based off of old-school Thrash mixed with Hardcore and Swedish Melodic Death Metal, but almost every sub-genre of heavy music finds its way into our writing and playing. We continue to get inspired by younger bands, as well. We will continue to push our sound and do our part to further the world of heavy music.

Cryptic Rock – That is very cool. Since the release of Extinction(s) in late 2018, you hit the road on a European tour with As I Lay Dying and Chelsea Grin. How did this tour go?

Trevor Phipps – That tour was the largest club tour we had ever done in Europe and it was great every night.  It’s not often a package stacked with bands that heavy, not in the mainstream, can bring out as many people as that tour did on a nightly basis. It was a good time!

Cryptic Rock –  Wow, sounds like an amazing experience. What does 2020 hold for the band?

Trevor Phipps – We headlined a European tour in February right before the virus took over the world. We had an Australian tour canceled due to the worldwide quarantine, and some May and June tours scrapped in North America that we hadn’t announced yet. That said, we have some European fests in late July into early August confirmed, but those are obviously up in the air until the pandemic eases up. We look forward to touring again, but public health is the most important thing right now, and we will focus our efforts on writing and connecting with our fans online until we get the go-ahead to hit the road again.

Cryptic Rock – It is certainly a trying time for everyone in music and all walks of life. Last question. If you are a fan of Horror/Sci-Fi films, what are some of your favorites?

Trevor Phipps – Growing up, I was first introduced to Horror by the original Friday the 13th (1980) and A Nightmare on Elm Street (1984) films. Friday the 13th Part III (1982) was my first Horror film at about 8 years old, because I had convinced my aunt and uncle that my parents let me watch Horror movies one night when they were watching my younger brother and I. I remember clearly how it filled my young mind with both excitement and fear. For months, maybe years, I would feel a rush when the lights were turned off in the basement when I was alone, or if I ventured too far away from friends or family while walking in the woods. That type of visceral reaction got me hooked on Horror and I’ve remained a fan of the genre since. Jaws (1975), Night of the Living Dead (1968), Critters (1986), Killer Clowns from Outerspace (1988), Creepshow 1 (1982) +2 (1987), The Blob (1958), and The Gate (1987) are a few titles I’ve watched dozens of times. I especially enjoy Horror-Comedy films like Dead Snow (2009),  Army of Darkness (1992), Tucker and Dale vs. Evil (2010), and Deathgasm (2015). 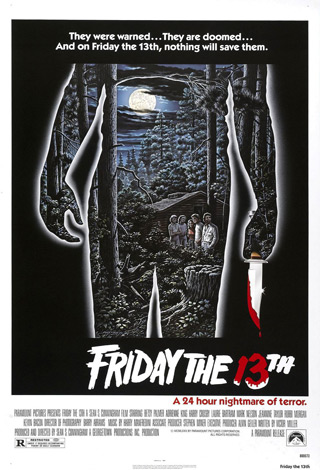