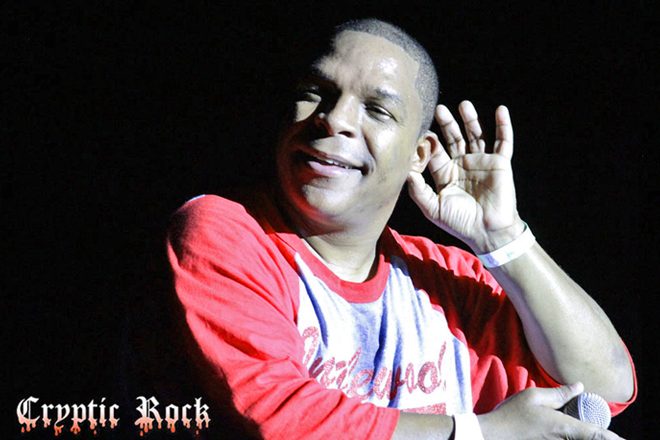 If Hip Hop’s seeds were planted in ’70s, it blossomed in ’80s, and reached new heights in the ’90s. What many consider the golden age of Hip Hop, the ’90s era saw a plethora of diverse artists rise to international acclaim and one of the most popular were known other than New Jersey’s own Naughty by Nature. Coming together over three decades ago as young teenagers, Naughty by Nature would go on to attain great success in 1991 with their self-titled album with memorable Hip Hop classics such as “O.P.P.” and “Everything’s Gonna Be Alright.”

Earning Grammy nomination, in 1992, and again in 1994 for “Hip Hop Hooray,” 1996 finally saw the talented trio tear down the wall when they won the award for Best Rap Album thanks to 1995’s Poverty’s Paradise. A triumphant journey, Naughty by Nature continue to keep their legacy strong over two decades later as they tour and plan for the future. Recently we caught up with Vin Rock to talk the past of the group, their busy 2018 including the Ship-Hop cruise, and much more.

CrypticRock.com – Through the years, Naughty by Nature has become one of the most recognized names in Hip Hop. Attaining platinum status, touring the world, and winning a Grammy, what has this wild ride been like?

Vin Rock – It has been good! Of course, like anything that has had this length of time, it has had its ups and down. Overall it has been good, and the older I get, the more I realize how blessed I am. We started on the streets of East Orange, NJ when we were 12-13 years old. To be blessed enough to make a living out of it and be considered legends amongst our peers and legends in our genre is a blessing. It is a definite blessing. 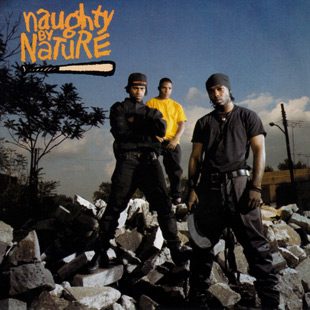 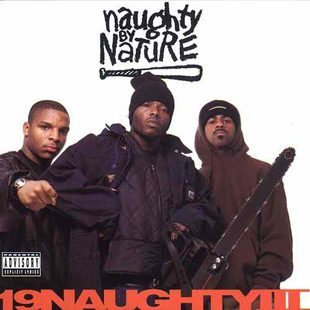 CrypticRock.com – Yes, and Naughty by Nature have been on the road performing and celebrating the legacy of the group. With a list of shows lined up through the summer, come the beginning of 2018, you will be a part of Ship-Hop with Salt-N-Pepa, Biz Markie, Young MC, among many others. How excited are you to be a part of Ship-Hop?

Vin Rock – Yea, this cruise will be the first of hopefully many more to come. It is basically a compilation of all the artists who have been on the I Love The 90’s Tour that has been going on since 2016. It is almost like it is our time, all this music is now 25-30 years old. To just see everyone at this time and age rejoicing in this music/artists is a great thing. The cruise is definitely going to be live, I don’t plan on sleeping the entire cruise!

CrypticRock.com – Very cool! It is a great lineup of artists. Being that the group has performed all over the world in various cities, have you ever played a cruise before?

Vin Rock – Yes, we have. We have done a few. We have done the Tom Joyner Cruise. This past November we did the Capital Jazz cruise. We have also been guests of Donnie Wahlberg and New Kids on the Block for their cruise. This will be the first cruise of this kind where we will be one of the headlining billed artists. 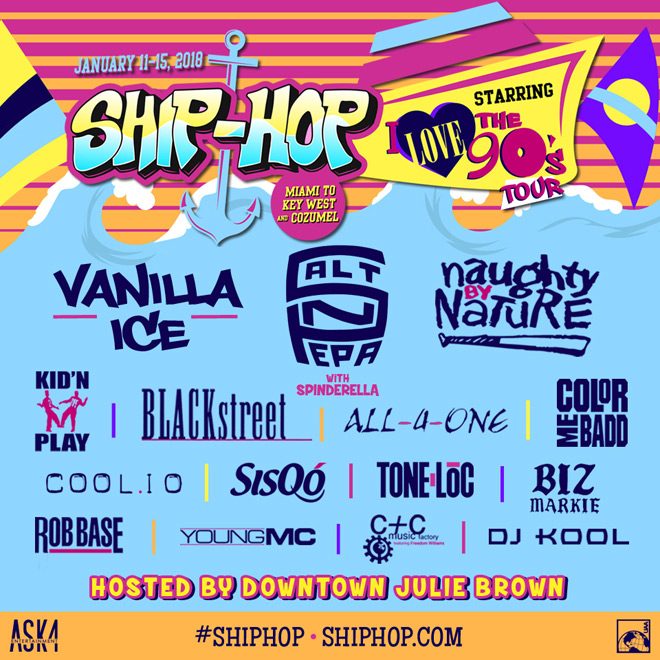 CrypticRock.com – Excellent, and this cruise is a good diverse mix of artists. It is a mix of Pop, Hip Hop, etc. What is it like playing with a mix of artists like this?

Vin Rock – It is great! Artists like Mark Mcgrath and All-4-One, these guys are great. It is almost like the soundtrack to our career. Those guys are peers. As we went through our growth stage, being the poster children for MTV, these guys were along there with us. When I hear their records and we tour together, it reminds me of my early 20s. I think the artists and fans are all getting the same experience from each other. It is kind of surreal.

CrypticRock.com – Yes, and it is great how genres can unite like that. Certainly the power of music. For your live sets, you mix it up to keep it fresh. Being Ship-Hop has such a long list of acts performing, what type of set do you have planned out?

Vin Rock – Well I am not really sure what the setup is going to be yet. They are still organizing all the programing. For us, we are ready to rock every night of that cruise, however they want to do. For us, we have a bunch of songs that are popular and a bunch which are not so popular. We come from an age where we performed in clubs, minus music videos and records on the radio. We are more live performers. It is very easy for us to perform unfamiliar records, to still keep the crowd engaged and keep them going as these records play everyday on the radio. We love that, that’s the part we love about what we do as live performers. 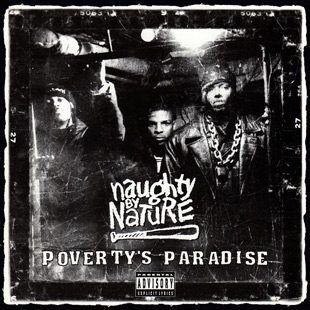 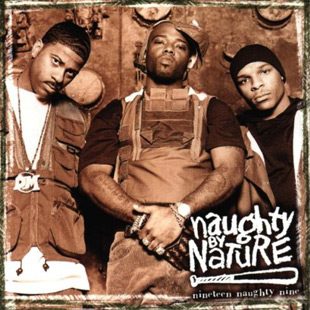 CrypticRock.com – Yes, and Naughty by Nature does a great job with that. Anyone who has seen the group live know that first hand. In 2016, the group celebrated their 25th anniversary. That said, the last LP released came in 2011. You had a crowdfund campaign together to fund the music. Is there a possibility of any new music in the future, or are you strictly concentrating on touring?

Vin Rock – We are going to try. We are really trying to put together our documentary right now and recapping our career. We are talking about doing it with Flavor Units, Queen Latifah’s production company. We sign that up and get the documentary going, then it is very easy for us to make new music to accompany the documentary. Hopefully we can make that happen. Like you said, 2016 was the 25th anniversary of Naughty by Nature and “O.P.P.” Then 2018 will be the 25th anniversary of our third album, 19 Naughty III, and the hit record off that album, “Hip Hop Hooray.” In 2018, we will be celebrating the 25th anniversary of that. We are planning tons of stuff right now, it is definitely going to be good and a big year!

CrypticRock.com – That is very exciting to hear and something to look forward. As you stated, you started as kids on the street. Hip Hop comes from the heart; a lot of these songs come from experience and what you went through. What do you think of the direction of Hip Hop nowadays, which for the most part does not tackle important social topics?

Vin Rock – Well I think kids today grow, or they are growing up, in a different era than us. We were born in the ’70s and there was a lot going on from the residual effects of the ’60s. I think there were a X amount of growth in our community when we came up in the ’90s and early 2000s. I believe more people my age, or a bit younger, who had children in the ’90s or early 2000s, maybe have spoiled their kids. These kids did not necessarily grow up with the same struggles as we had. Maybe socially and politically they may not be as in tune as we were, which leads to a bunch of partying and bullshiting basically.

There is not much consciousness in the music these days. It is a lot of partying, getting drunk and high for the most part of what you can see. There are socially conscious artists out there like Kendrick Lamar and K Cole. There are a slew of artists out there who do have more substance in their music, it is just the turn of Club music may have a bit more energy on the streets with the kids. It is what it is. I try not to bastardize the kids, I just try and challenge them to dig into more of what is going on today, and make sure we don’t overlook the artists who do have that kind of substance in their music like the Kendrick Lamar and K Cole. 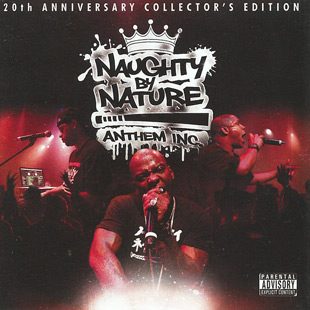 CrypticRock.com – Very good point. Another thing, the industry commercially dictates what people do. Was there a little more freedom creatively when you came up?

Vin Rock – Not necessarily because when we came up everything we did, we had demos and shopped it to the labels, everything we did had to be submitted to the labels. There was some headbutting on what the singles would be. Now, these kids have far more freedom of what they do with their records. A matter a fact, of how record labels engage artists is the exact opposite. Because these kids have social media and all these digital platforms and YouTube, they are breaking their own records. There are a lot of kids that have the ground swell of the street and even as they are getting up their movement, they are able to record as they go along. They are able to get it out on social media as they go along. 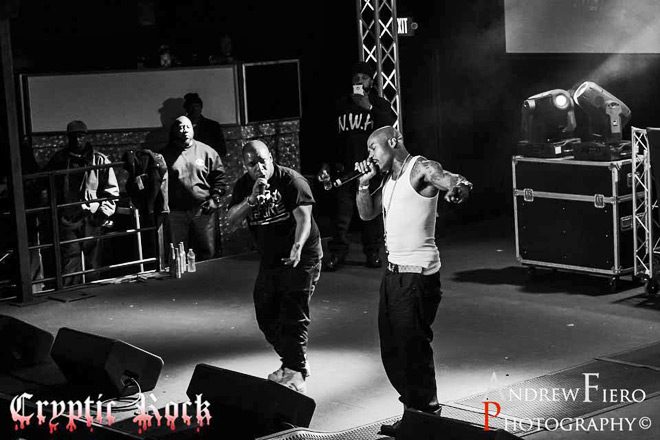 CrypticRock.com – That is very true. It is quite a do-it-yourself industry now. Everyone has a Bandcamp page and doing their own thing. My last question for you is pertaining to movies. CrypticRock.com covers music and Sci-Fi/Horror films. If you are a fan of of either genre, what are some of your favorites?

CrypticRock.com – Understood. You are not a fan of television or film too much?

Vin Rock – Nah, I am out in the real world socializing with people and stirring things up in the physical world. I cannot stand sitting in front of a television or watching movies, it just takes up too much of my time, at least in my mind (laughs). I rather be out in the mix with real people mixing it up and creating my own movies, experiencing life. There are a lot of people who binge watch on Netflix and all these channels, that is a good thing, I don’t knock them. Those are creative people who produce that content. Even the people who consume it, they are very creative people and they think outside the box.