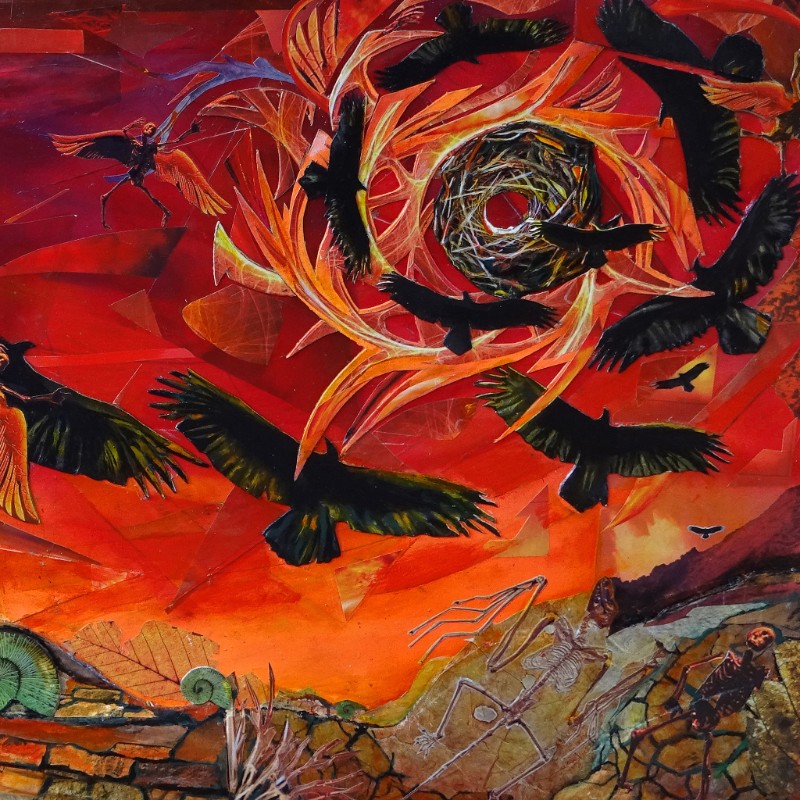 Intronaut is a Progressive/Psychedelic Rock/Jazz outfit that was formed back in 2004. A band that has always sought to challenge the listener, as well as themselves, their name is derived from the words, intro- (inward) and -naut (traveler/voyager) and is a reference to their desire to have their music cause people to look inwardly into their own mind as they listen. A product of Los Angeles, they were; Leon del Muertes (guitars/vocals), Sacha Dunable (guitars/vocals), Danny Walker (drums), and Joe Lester (bass). After their first studio album, Void, and before they signed to Century Media, Muertes left the band and was replaced by Dave Timnick. Their albums started off more rhythmic and jazzy and have since become more Grunge Metal and Psychedelic. Very recently, they were able to convince Ben Sharp of Cloudkicker to change his mind about touring by convincing him to let them be his live band. A live album and some footage from this was their most current work before The Direction of Last Things. The live aspect seemed to have worked well for them. Having always considered themselves a live band, they forwent spending weeks or months in the studio, instead cutting it down to just four days. The result is an album that feels like a live wire, unpredictable and alive.

An auditory tome comprised of epics, the songs average around seven minutes each and the first song, “Fast Worms,” comes in with a lot of momentum in every aspect. The opening riff has the drums creating waves that the guitars ride on, creating a catchy, wordless mantra. The vocals come in aggressively, then melodically, then aggressively again, before they drop us off at a place where the instruments take full reign. One might call this year, the year of the bass. The break in the middle of the song has some really elegant bass work and the whole bit is reminiscent of older Intronaut. It goes to show how much they have grown. Now they are able to take everything that has made them great in past and put it all together in a song that sounds effortlessly like it rolled right off the tip of their tongues.

Not necessarily heavier, but certainly more menacing, “Digital Gerrymandering” starts off with chanting vocals adding to the brooding feeling as the guitar switches from heavy chugging to dark arpeggiations. Like a man lost at sea and the man narrating his demise, Sacha and Dave recreate a feeling of despair and tragedy. The guitars and bass play hide and seek during the instrumental break until crescendoing back into the vocal’s epic harmony. The longest track on the album, it incorporates a lot of musical elements and motifs well and then takes us into the shortest track on the album. “The Pleasant Surprise” is also the most raw. The vocals on “surprise and delight” feel like they were off the cuff and the whole song has a bit of a Dillinger Escape Plan flavor. A minute into the next track filled creepy alien sounds and bible belt preaching introductions, “The Unlikely Event of a Water Landing” channels Steven Wilson with spot on chorus effects. Like the musical chameleons they are capable of being, they then switch it up into something more Between the Buried and Me-esque, screaming just so. Coming out of the mid-song break, the guitars really open up and spread their wings, and it’s beautiful. It ends on this same note and is the sweetest song of the album.

The transition into “Sul Ponticello” really shows off how elegant the pacing and structure of this album are. After that beautiful midway point, listeners return with a song that has a polyrhythmic march like a man with an agenda. Musically, the song’s title refers to playing music, “with the bow kept near the bridge so as to bring out the higher harmonics and thereby produce a nasal tone.” The outro, a hypnotic mind-washing session ends with the line, “…it is impossible that the blood of goats and lambs should take away sins.” As for the title track, it seems to focus less on any one idea and more on some epic riffage. After the waves crash the listener to shore, the song quiets down and birds circle their next meal. “City Hymnal” closes this album well. Repeated attempts to bring back epic riffs, in the end, it all washes out in a psychedelic haze where the listener is left pondering their aural journey.

The Direction of Last Things is one of Intronaut’s most memorable efforts to date. The songs are well-written and while long, have enough personality to hold onto their identity. The overall arrangement of the album is smooth and flows so well that one hardly notices when the tracks change, despite each track having its own fingerprint. The maturity that comes with working together with the same people for so long can really be felt, as can the fact that they recorded this all so quickly. It is nothing but good vibes and CrypticRock gives this album 4 out of 5 stars.