Almost 40 years removed from their debut, cult legends Goblin will launch their first ever North American tour this October. The tour will start October 1st in Atlanta, GA, and will culminate with a two-night run of performances in Austin, TX, at the Housecore Horror Film Festival on October 25th and 27th.

The Italian Soundtrack Kings will perform all of their classic cuts, including scores from Deep Red, Suspiria, Tenebrae, Dawn of the Dead, Phenomena, Sleepless and other songs that are milestones among prog rock followers, including songs from Roller, Il fantastico Viaggio del Bagarozzo Mark, and most recently Back to the Goblin. Other famous scores never performed live anywhere will be included on this tour.

First signals of a reunion started 8 years ago when Massimo Morante and Maurizio Guarini, together with other members of Goblin, released a new album, Back to the Goblin, after a long absence. The band felt it was time to expose the music to new generations of fans and invigorate their loyal following. In 2009, Goblin started touring the world, hitting the major European cities including Rome, Paris, London, Berlin, and many others (in 2010 Claudio Simonetti re-joined the band). The band found the tour to be a great success, and the fan base kept growing, bringing back the old enthusiastic crowds of the Seventies and converting new fans of all ages along the way. To follow this up, in 2011/2012 the band ventured to Japan and Australia and met the same enthusiasm. This led to an increased desire to come to North America as a full band for the first time ever.

The tour will include a small amount of VIP ticketing, allowing fans to meet the band, get up close, see part of the soundcheck, and walk away with a commemorative poster. Also during the tour the band will be selling an exclusive tour EP put out by Death Waltz Records. The EP features brand new versions of classic Goblin tracks re-recorded by the recently reunited band. The EP will be pressed on blood red 180g vinyl and feature an exclusive cover design by poster artist Graham Humphrey’s (Evil Dead, A Nightmare on Elm Street).

The lineup for this tour will include original members since 1975 Claudio Simonetti and Maurizio Guarini (keyboards) and Massimo Morante (guitar). The band is rounded out by drummer Titta Tani and bassist Bruno Previtali that joined in 2010.

Support on the tour (up to October 20th) will come from the Northern California based Secret Chiefs 3, formed by Mr. Bungle founding member Trey Spruance. Secret Chiefs 3 have developed quite a cult following of their own over the last 15 years with their blend of other worldly psychedelic rhythms and melodies.

Click here for tickets for the shows below and for more information check out the official Goblin website! 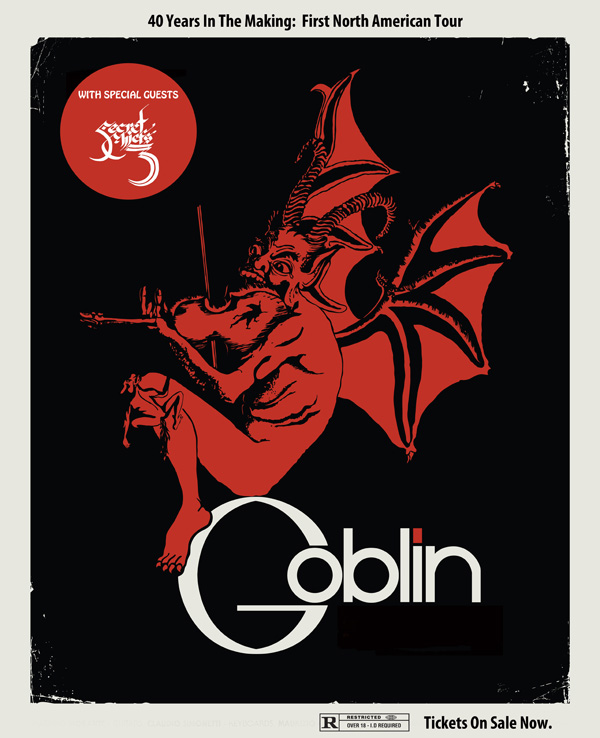