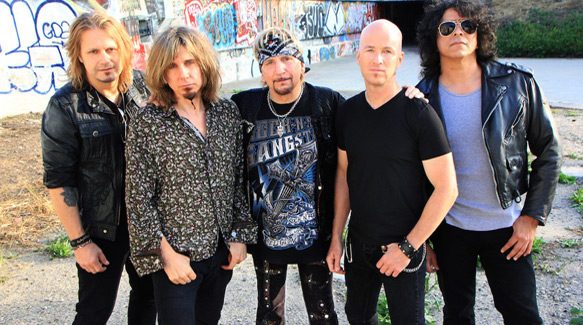 Emerging from a troubled history, with a determination not to remain caught in past glories or dwell on past tragedies, Jack Russell keeps the story of Great White moving forward in 2017. With history that dates back to 1977, under the name Dante Fox, Great White was born years later, going on to attain more attention touring with Whitesnake and Judas Priest.

On the verge of a major breakthrough following 1986’s Shot in the Dark, a year later, Once Bitten… would launch them into Rock stardom. Following up with …Twice Shy in 1989, Great White travelled a long road to multi-platinum mainstream success.

Sadly, as the ’90s emerged, Grunge took over, leaving little place for heroes of the ’80s Rock/Metal scene. Biting and clawing their way through the decade, Great White would go on to release five records between 1991 and 1999.

Surviving splits and reformations, they hit headlines again in 2003 when a gig ended in disaster after pyrotechnics set the soundproofing alight at The Station Nightclub in West Warwick, Rhode Island. Tragic and heartbreaking to family, friends, and the band, the trauma sat with Russell for years to come. No stranger to adversity and struggle, Russell fought his way through it, and all years later, keeps his vision of the band alive in the form of Jack Russell’s Great White.

Joined by Tony Montana on guitar and keyboards, Robby Lochner on guitar, Dan McNay on bass, and Dicki Fliszar on drums, the inspired band is signed to Frontiers Records with something to prove. Marking 40 years since the band started, Jack Russell’s Great White drops the charismatic new album, He Saw it Comin’, on January 27th.

Eleven brand-spanking-new songs, it begins with classic rocker “Sign Of The Times.” A woeful condemnation of the modern age, the reliance on technology, and celebrity culture, there is something honest and straightforward about this band, and it is conveyed in this track. Not pretending to be something they are not, there is a groove to “She Moves Me” which draws the listener in with a cool and sexy vibe, strong rhythm, and some subtle hand claps. Then there is the wild and free hooks of “Crazy,” which is pure ’80s nostalgia, and even alludes to Great White’s biggest selling albums Once Bitten… and …Twice Shy in one of the lines.

Moving on, bluesy ballad “Love Don’t Live Here” is a perfect showcase for how Russell’s vocals have stood the test of time. Recovering from bad love songs, with cliche after cliche in the lyrics, it is still all in good fun and part of the charm. Thereafter, “My Addiction” feels the most modern of the tracks. Brutally honest with a sinister undercurrent, it could be about any form of addiction, and while it does not specify, everyone has something they are addicted to, making it quite relatable. This is before “Anything For You,” which is quaint and sweet, like an old 78 recording with a little crackle as well as an old fashioned quality. Gentle and soothing, with acoustic guitar, there are emotional Beach Boys-style harmonies and lots of space to breathe, poignant in its subject.

The title-track, “He Saw It Comin’,” has a short interlude, beginning with kids taking to the instruments, a roar of the crowd, and the excitement of live music to a receptive audience. Soon leading into a Beatles-like number, there is a very ’60s feel while the words deal with the shelf-life of older bands, the fame game, and social media. Funking it up, “Don’t Let Me Go’s” bass lines make it quite appealing, and overall, the song will get lighters held high when played live.

Adding a bit more fun, “Spy vs Spy” features a weird Sci-Fi intro, a James Bond style story, and an interesting instrumental break. In complete contrast to the previous song, grittier and dirtier, “Blame It On The Night” follows, dealing with some dark themes of child abuse, showing there is more depth to this band than meets the eye. Finishing with some Doo-Wop, the enjoyable and different “Godspeed” is almost all just done with vocals. Having very minimal instruments around it all, it is a whimsical and entertaining end to the album.

While there are nods to the heyday of the ’80s, Jack Russell’s Great White are certainly not a band stuck in the past. They are not just recreating the same sounds that they did back in the day, they are creating something vital and fascinating. That said, there is a huge amount of variety within the songs of He Saw It Comin’, with one unifying factor, Russell’s undeniable vocals, which are still powerful and emotional. For a change, it seems luck is favoring Jack Russell, either that, or, like the little dog he shares a name with, he is simply too tenacious to give up. Above all, one thing that cuts through the whole album is the honesty, something that will endear the band to a whole new generation of fans. For these reasons, CrypticRock gives He Saw It Comin’ 4 out of 5 stars. 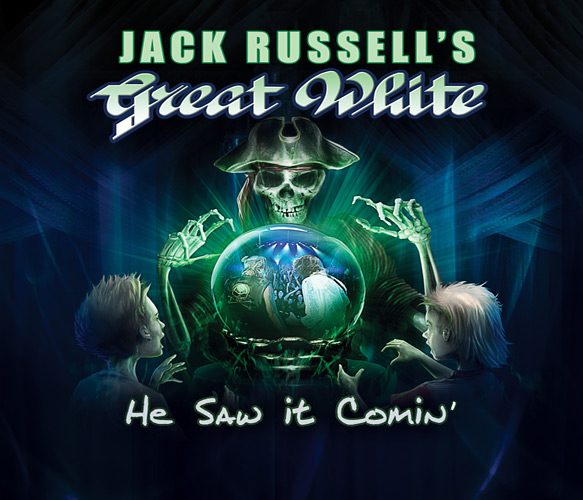