This Halloween, for an hour and fifty minutes, movie audiences will once again be at the mercy of the omniscient and omnipresent Michael Myers. For one night only, on October 29, 2015, at 7:30 PM local time, the original Halloween, directed by John Carpenter and released on October 25, 1978, will be playing in theatres across the country. This seasonal classic will be presented, complete and uncut, along with an exclusive introduction by John Carpenter himself, who will provide insights on his cult classic and discuss how the film has changed the way an entire genre is portrayed, both in Hollywood and through Horror fans themselves. 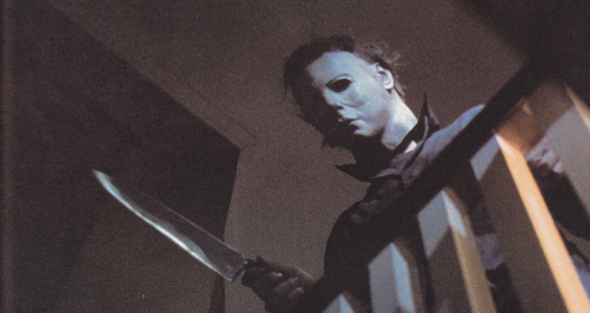 This special event is presented by Fathom Events, SpectiCast, and Trancas International Films, three companies that know how to create an extraordinary event. “We are very excited to work with SpectiCast and Fathom this year to bring John Carpenter’s timeless classic, Halloween, back to the big screen,” said Trancas International Films CEO Malek Akkad. “This movie is well deserving of another play on the big screen,” said Fathom Events CEO John Rubey. “We cannot wait for audiences to experience this twisted tale in theaters for Halloween.” A recognized leader in the alternative entertainment industry, Fathom Events provides one-of-a-kind movie theatre experiences nationwide. They have their thumbs on the pulse of American Pop culture, offering audiences unique extras as well as behind-the-scenes information and creating the ultimate entertainment experience. Philadelphia, Pennsylvania’s SpectiCast is the fastest growing event cinema marketing and distribution company in the world, showing alternative theatrical content in over two thousand venues in forty-seven countries across the globe. Trancas International Films and its subsidiary, Compass International Pictures, has been involved in each and every film in the Halloween franchise and have made it their mission to deliver Michael Myers in all of his glory to Horror fans the world over.

Halloween originally aired in Kansas City, Missouri, where its successful run led to showings in larger cities such as Chicago and New York City. Once it hit the big time theatres, it was not long before box offices across the country were letting Michael Myers through their doors. For a movie that began as a small, independent project filmed for just over three hundred thousand dollars, Halloween‘s unstoppable, sadistic killer and open ended final scene drew crowds in the thousands, and in the thirty-seven years since its release, the film has made its money back over two hundred times over. The story is based around the soulless psychopath Michael Myers, who began his killing spree at age six when he slaughtered his own sister on Halloween night. When, at twenty-one, he escapes the insane asylum that had been his home since the murder, Myers decides to finish the job he started fifteen years previous and return home, once again on All Hallows’ Eve.

Fans should check local listings or go to www.FathomEvents.com to find participating theaters to buy tickets to this special, one night event on October 29th. This is a once in a lifetime chance to see the original Michael Myers on the big screen, surrounded by hundreds of their closest, Horror-freak friends.