John Carpenter’s In The Mouth of Madness 20 years later

This year marks the 20th anniversary of what may be John Carpenter’s most underrated film, In the Mouth of Madness, which entered US theaters on February 3, 1995, and then just as quietly exited. Written and executively produced by Michael De Luca (Boogie Nights 1997, American History X 1998) in the late ’80s, In the Mouth of Madness would not see production until August 1993. After passing it around to several other directors, it eventually fell back to the capable hands of Carpenter. The film is a cinematic tribute to the master of literary horror, H.P. Lovecraft, whose works include “The Call of Cthulu,” “Pickman’s Model,” and many others. The Black Church and the dripped, tentacle creatures seem to be taken straight from of the pages of Horror’s most famous novelist. The Black Church’s exterior is actually the Cathedral of the Transfiguration, a Slovak Byzantine Rite Roman Catholic cathedral located in Markham, Ontario. All the effects were done by KNB EFX. Sadly, the larger creatures are seen so briefly, that outside of a few extreme close-ups, one would have to freeze the frame in order to get a good look at all of KNB’s hard work. 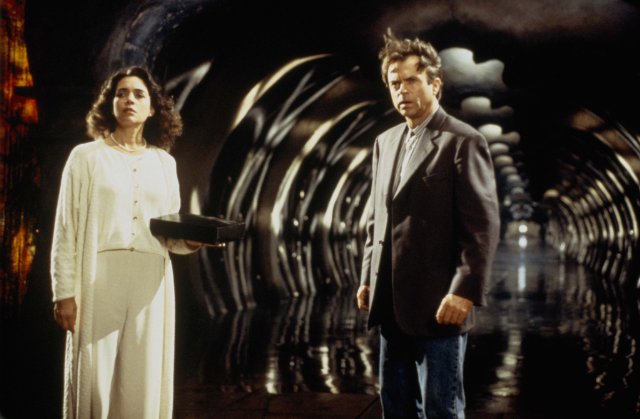 John Trent (Sam Neill: The Hunt for Red October 1990, Jurassic Park 1993) is dragged into a mental hospital and thrown into a room. Dr. Wrenn (David Warner: The Omen 1976, Titanic 1997) enters Trent’s room to see crosses drawn in black crayon all over the walls and the agoraphobic man himself, and asks him to tell his story. Trent, an incomparable freelance insurance investigator, explains about a meeting with CEO Jackson Harglow (Charlton Heston: The Ten Commandments 1956, Planet of the Apes 1968) and editor Linda Styles (Julie Carmen: Gloria 1980, Fright Night 2 1988) of the Arcane Publishing House. They explain that the profitable author Sutter Cane (Jurgen Prochnow: Das Boot 1985, The DaVinci Code 2006) and his new book have disappeared and they want Trent to investigate. Sutter Cane’s works have been known to have an “effect” on less stable readers, so, to get a better feel for the situation, Trent buys all of Sutter Cane’s books and immediately starts hallucinating about murders and deformed creatures. While looking at the book covers, Trent cuts them up and refits them together, finding they form a map to the town of Hobb’s End, the fictional town from Cane’s books.

As Linda drives Trent to Hobb’s End, the road suddenly disappears. Suddenly, they arrive at the quaint and seemingly deserted Hobb’s End. They check in to the strangely familiar Pickman Hotel, where Mrs. Pickman (Frances Bay) takes their info and gives them their keys. Trent and Linda investigate the town, finding people, landmarks and events from Cane’s books, including the surreal, ominous Black Church. They are greeted by a mob of locals brandishing shotguns, led by Simon (Wilhelm von Homburg: Die Hard 1988, Ghostbusters 2 1989), who yells for Cane to give back their kids. A door opens, revealing Simon’s son, Johnny (Jack Moor-Wickham), then they open and close until finally revealing the sinister Sutter Cane. Out of nowhere, a pack of Dobermans attack the mob as Linda and Trent make their escape. Back to the hotel, Trent claims that none of this happened in the books, but Linda explains that it all happens in the new book. She then reveals that the entire escapade was a stunt by the publishing company to promote Cane’s book, although the supernatural aspect was unexpected. Trent heads to the bar, still trying to figure out the gag, when a bloodied Simon walks in and warns him to leave. Linda enters the church and finds Cane in his writing room, where she’s exposed to his final book, causing her to go insane. 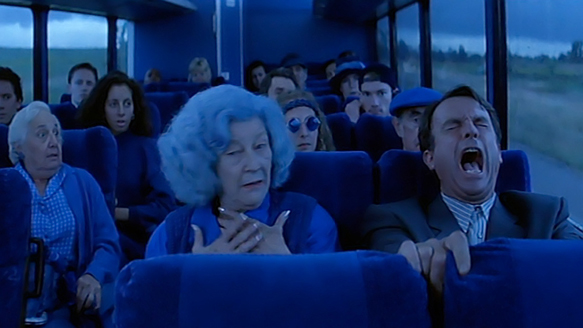 Trent goes back to the hotel to find Mrs. Pickman, now a tentacle creature, hacking up her husband. Trent runs back upstairs and sees Linda get possessed by some creature. He drives back to the bar and sees Simon once again, who shoots himself because he was written that way. Trent tries to leave, but no matter where he goes, he ends up back outside the bar. He drives through a crowd of mutated townspeople and crashes into a light pole, trying to avoid Linda. When he wakes up in the church confessional, Cane explains that his new book will have enough readers to allow an ancient race of horrific gods to return to earth. Suddenly, they are in Cane’s writing room, where it is revealed that Trent himself is a work of fiction and that his job is to bring the manuscript back to the real world. Cane gives Trent the manuscripts and then tears open his face like a piece of paper, revealing a black abyss from which the creatures spill out and chase Trent down a long tunnel. He falls, and just as the creatures are upon him, Trent awakens on a country road. On his way back to the city, Trent destroys the manuscript, only for it to return back to him, undamaged. When Trent tells Harglow the story, he learns that not only has Linda never existed, but that Trent delivered the manuscript to Harglow months ago. The book has been on the rack for weeks and there is a movie on the way. Realizing that Cane can’t be stopped, the now insane Trent kills an innocent reader in front of a bookstore. He is arrested and sent to the mental hospital.

Back in the hospital, Dr. Wrenn discounts Trent’s story as result of his insanity. Trent awakens later to the sounds of chaos outside of his room. He emerges to find everyone gone and himself free to go, only to end up in front of a movie theater with the marquee saying, “NOW PLAYING: IN THE MOUTH OF MADNESS STARRING JOHN TRENT.” There is radio broadcast from a nearby ambulance talking about an infection going around, along with violence and mutations. Trent goes into the empty theater with a bucket of popcorn, sits down, and laughs hysterically as watches the events of his life from the past few days unfold on the screen. 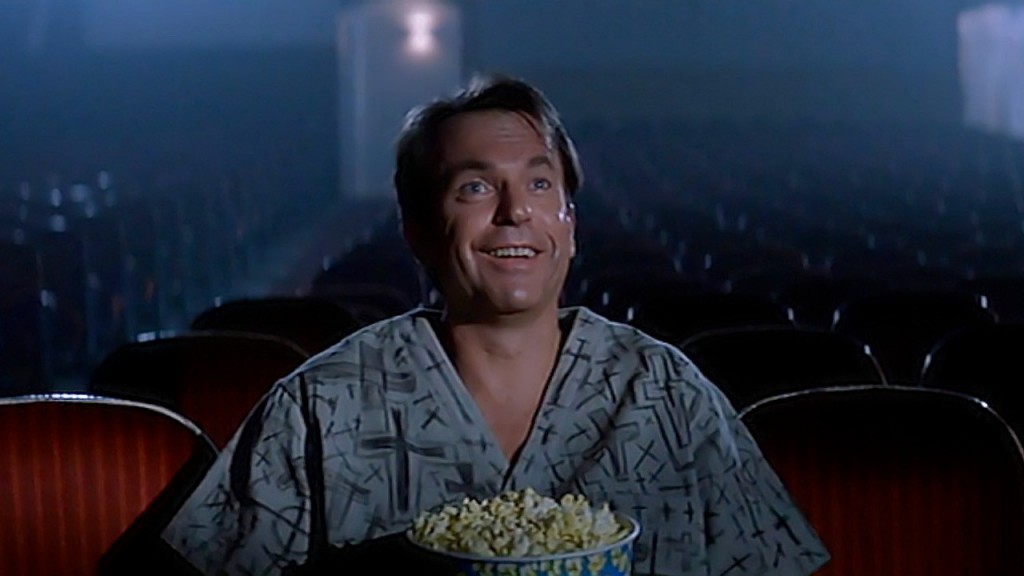 In the Mouth of Madness is a look at fiction versus reality, and, given the right circumstances, how they can be flipped. As Linda told Trent, “Reality is just what we tell each other it is. Sane and insane could easily switch places.” It is a sobering thought: what if everything known was suddenly reversed because the majority of the human race’s views have changed? Up is down, dark is light, backwards is forwards, and language is gibberish. Yet, what if one was powerless to break away from the old, original truths?

In the Mouth of Madness grossed almost nine million dollars total in revenue during its short run. Although the movie covered its budget corporately, it was deemed a disappointment. While the reviews were mixed, they were mostly negative, such as, “One wonders how In the Mouth of Madness might have turned out if the script had contained even a little more wit and ambition,” from Roger Ebert. While the VHS release gave In the Mouth of Madness a wider fan base, it will never be as highly regarded as Carpenter’s Halloween (1978) or The Fog (1980). This is a shame, since the movie is a surreal, mind-bending trip that Horror fans have come to appreciate over the years and have turned into a cult classic. 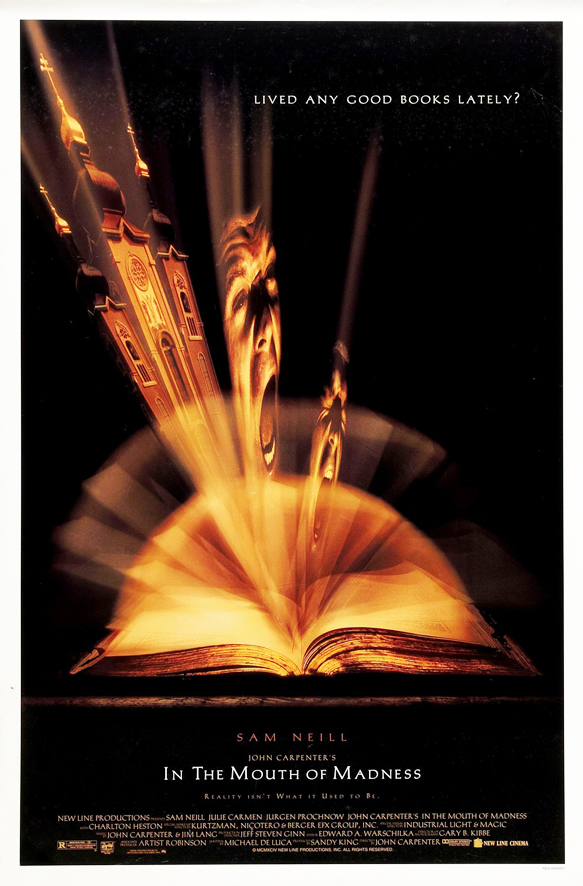