The music of Johnny Hates Jazz is an epitome of what is known as Sophistipop – smooth, soulful kind of music with sophisticated arrangements, jazzy undertones, and Pop and New Wave sensibilities. It nestles well in the same heart that has become home to similarly styled groups like The Bible (“Honey Be Good”), The Blue Nile (“Happiness”), Breathe (“Hands to Heaven”), Fra Lippo Lippi (“Later”), Lighthouse Family (“Lost in Space”), and PM (“Piece of Paradise”).

Formed in 1985, in London, England, by Clark Datchler (vocals, keyboards, guitar), Mike Nocito (bass), and Calvin Hayes (keyboards, drums), Johnny Hates Jazz had three studio albums under its name. There is chart-topping and multimillion-seller debut, Turn Back the Clock; the sadly overshadowed follow-up, 1991’s Tall Stories, which featured music producer Phil Thornalley as a replacement for Datchler, who quit the band in late 1988 to re-start his solo career; and 2013’s Magnetized, spearheaded by Datchler, who collaborated again with Nocito for this comeback album.

However, after everything has been played in ernest—and, of course, with due respect to its successors—Johnny Hates Jazz’s first full-length remains to be the band’s pinnacle, and it turned thirty this year. So, to give the sleek album a loving spin is timely and appropriate. Turn back the clock one more time and get misty-eyed. Let your heart melt and fall in love all over again with the songs that time has preserved well.

Released on January 11, 1988 in the UK through Virgin Records, Turn Back the Clock was an instant success. Shortly after released on March 29th in the US market, it swiftly soared to the charts and into the hearts of especially those who loved lightweight but sophisticated, wistful, and romantic music. It opened with “Shattered Dreams,” whose relatively upbeat tempo was an effective counterpoint to the bittersweet and scathing sentiments in its lyrics, straightaway setting the album’s overall theme. The poppy and shiny vibes carried on to “Heart of Gold,” which shone out even more because of its synth-trumpet interludes.

Inarguably the most beloved by the majority of the fans of Johnny Hates Jazz, the album’s title track to this day could still pluck a thousand teardrops from the eyes of the nostalgic and the hopelessly romantic and strum a minor chord from her yearning heartstrings: “Remembering my yesterdays / I begin to weep / If I could have it over / Live my life again / I wouldn’t change a single day….” Who wouldn’t want to “bring the wheels of time to a stop” while listening to “Turn Back the Clock?”

With “Don’t Say It’s Over,” the trio of Johnny Hates Jazz were probably channeling their ’70s R&B/Motown influences, exuding soft echoes of Al Green (“Let’s Stay Together”), Marvin Gaye (“Since I Had You”), and Smokey Robinson (“Cruisin’”). “What Other Reasons” then took the listener to another dip into slow balladry, only to keep her on her toes again with the ensuing groove and funk of “I Don’t Want to Be a Hero,” whose anti-war sentiments separated it from the album’s romance-oriented motif. Sonically, it still fits well on a playlist that includes “You to Me Are Everything” by The Real Thing, “Where Is the Love (We Used to Know)?” by The Delegation, and “I Want Your Love” by Chic.

Perhaps the most melodic and heartbreaking song on the album, both in melodies and in words, the beautiful ballad “Different Seasons” trickled and undulated like a worried beat and an anxious pulse. The brokenhearted surely never missed Datchler’s pained voice in this song, as it strained and cracked in some corners.

“Don’t Let It End this Way” was a change of style—still polished and jazzy but with a strong Reggae sensibility, stinging like an English bee in New York. Then, Johnny wrapped up the clock with the summery, upbeat “Foolish Heart,” where Datchler’s soul ultimately broke free and his velvety voice soared finally onto the bright cumulus skies, yet still drowning his sorrows by singing poignantly: “Oh you will take my hand / And we will wander far away… / Down where the age has passed me / I will be sure / You will be there and I will belong / To me and my foolish heart.” What a sad note to end the whole experience with.

At the end of the spin, moreover, no matter if thirty years have passed, perhaps no one from the ’80s generation can really resist the longing to turn back the clock to her youthful years—with all the memories recurring like black-and-white photographs, while this wonderful soundtrack that Johnny Hates Jazz bequeathed to lovers and loners in 1988 was playing. No one, not even the brave has such wooden heart when he tries to look back.

You can wipe your tears now. 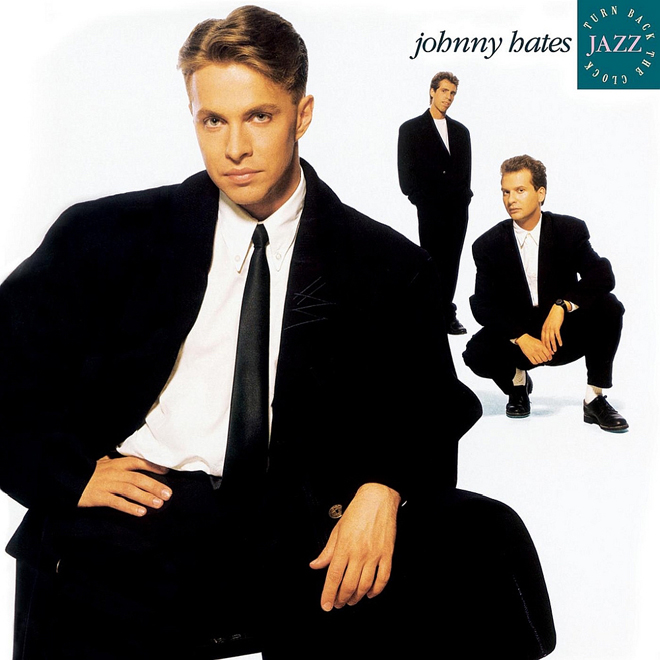 Catch Johnny Hates Jazz on April 27, 2018 celebrating Turn Back the Clock in concert at Indigo At The 02 in Greenwich, United Kingdom.

Purchase Turn Back the Clock: