“Ghosts exist whether you believe in them or not.” Since the turn of the century, Haunting and Possession movies are a dime a dozen. Second only to Zombies, Ghosts and Demons, stories are plentiful and are even easier to create – filmmakers need only a flickering light bulb and some invisible fishing line to give an audience the impression that something otherworldly is flitting about on their screen. It seems as though every haunted house and/or demon possession idea has been done to death – from attacking swarms of flies to puking pea soup. With Falling Shadows Productions’ Judas Ghost, however, Director Simon Pearce brings to the screen a new kind of haunting. 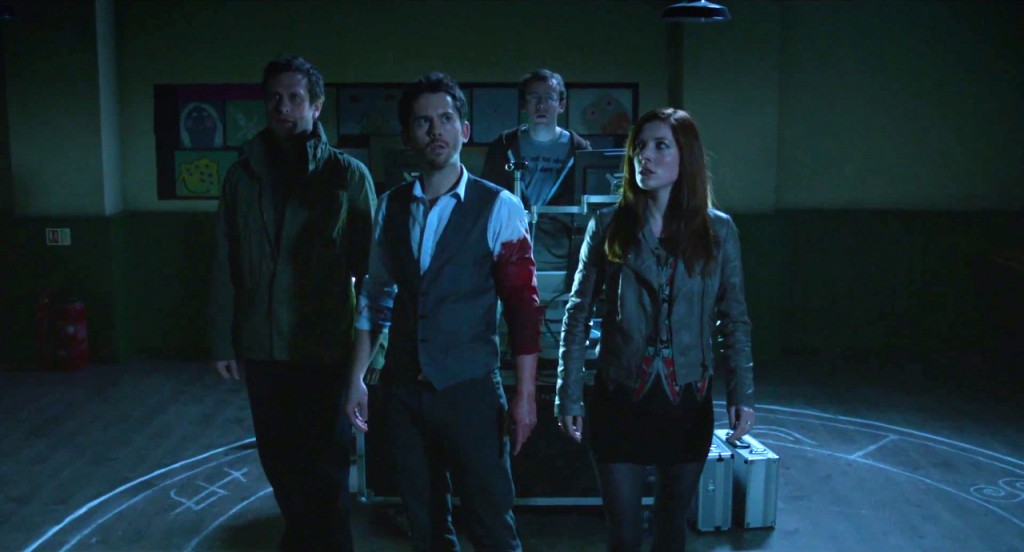 Judas Ghost was a first time adventure for many of those involved. This was Pearce’s sophomoric effort after 2009’s Shank and Producer Wolfram Parge and Scriptwriter Simon R. Green’s debut film, which was based on Green’s Ghost Finders book series. Not all were new to the scene – Dancing on Ice veterans Paul Cartledge and Philip Jewson composed the score while Chemical Wedding’s Lucy Cudden, The Office’s Alexander Perkins, Vampire Diary’s Grahame Fox and established television actors Martin Delaney and Simon Merrells acted out the movie’s roles. John Swinnerton (Fear and Loathing in Las Vegas 1998, King Kong 2005) created the award winning visual effects.

Released in the US in December of 2015, Judas Ghost tells the story of Paranormal Investigator Jerry (Delaney), Psychic Anna (Cudden), Cameraman Mark (Merrells), and Tech Geek Ian (Perkins) as they investigate reports of supernatural occurrences taking place at a rather contemporary, one room village hall. Told by their superiors that they were making a training video, Jerry kicks off the night with a hubristic speech on camera as Anna realizes that she cannot feel anything spiritually in the building whatsoever. 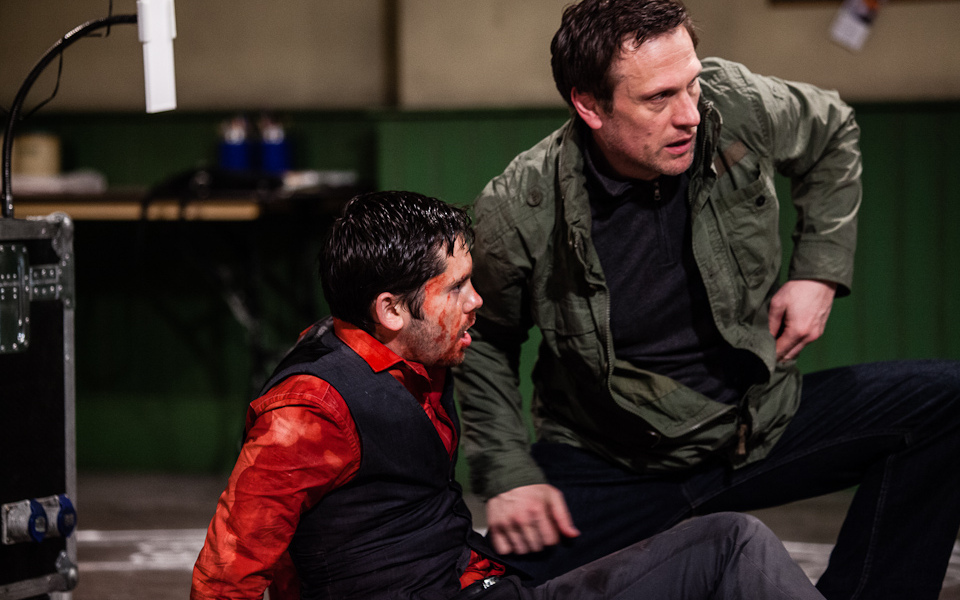 The team wonders about the inclusion of Mark as a mere cameraman, since, not so long ago, he led his own investigative team until some sort of paranormal accident ended his career. Suddenly, the bright afternoon sunlight streaming through the windows turns pitch black. Try as they might, no one can see anything in the darkness outside, and when they realize that the closed room door has moved itself to another wall, Ian starts to panic. He runs to the door, but when he yanks it open, there is only howling, soul-sucking darkness out there. Who – or what – is behind this severance from the rest of the world? Is there a way to fight this darkness? If there is not, then how does one escape from it?

Filmed completely in one room, Judas Ghost proves that there are other ghostly stories to be told. The inescapable, claustrophobic room, the cringe-worthy, bullying Jerry, who thinks he can twist the arm of an invisible spirit, the lack of any psychic imprint, and the introduction of the maniacal creature that uses the people in the room to its own advantage all combine to form a film that will have audiences peeking out from between their white knuckled fingers. Much like 1987’s Prince of Darkness, this film takes a rather ordinary place and turns it into a terrifying, supernatural Catch-22. No one knows who they can trust, everyone has a secret, the night is never-ending, and the Judas Ghost is leading the rest of the lambs to slaughter. 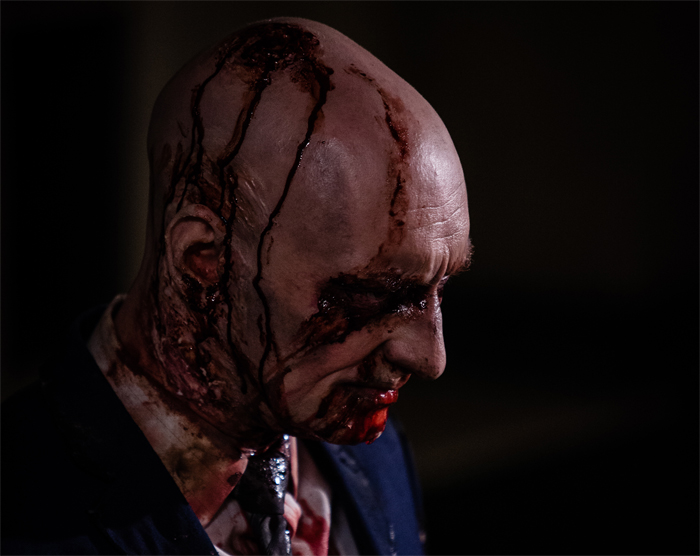 Although relatively new to the US, Judas Ghost has been around the block in the UK, gaining recognition and winning awards left and right. Simon Pearce won the Best Director award from British Horror Festival and Martin Delaney caught a Best Actor award during the Diabolique International Film Festival, both in 2014. That same year, the film itself won Best Horror Feature at the Tabloid Witch Awards and the London Independent Film Festival. Grahame Fox and John Swinnerton also won Tabloid Witch Awards – the former for Best Supporting Actor and the latter for Best Visual Effects. This recognition goes to show that Judas Ghost is a must see movie for all Horror fans. Check it out to find out what was behind that all-encompassing blackness and what it really wanted in the end. “Ghosts exist. But then, so do we.” CrypticRock gives Judas Ghost 4.5 out of 5 stars. 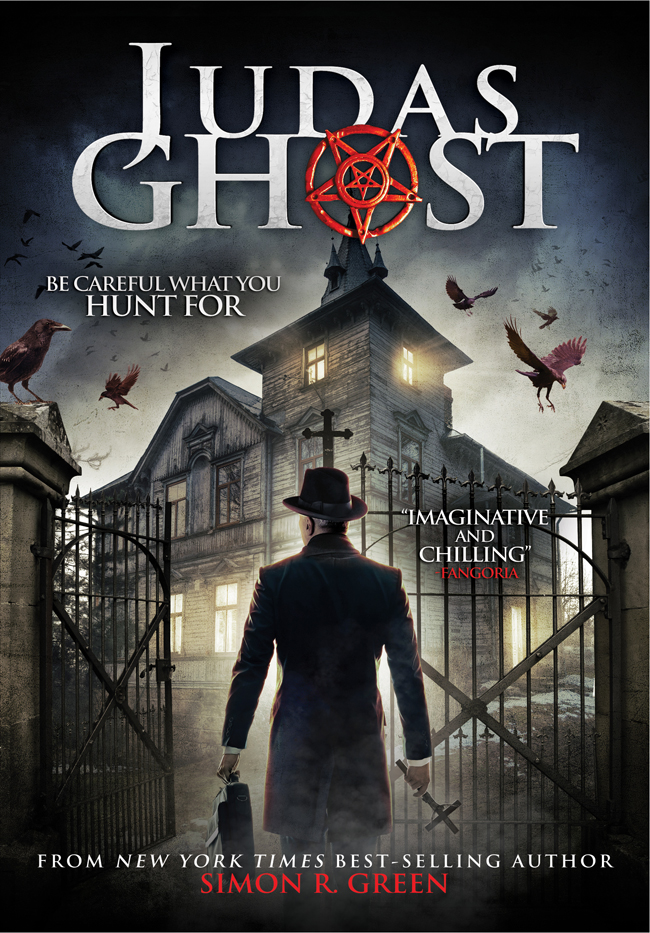