Paving the way for the Heavy Metal scene in the early 1970s, five hardcore headbanging rockers, wearing a lot of leather and metal studs, called themselves Judas Priest. The British band, formed in Birmingham, England in 1969, had several personnel changes before recording their first studio album, Rocka Rolla, released in 1974 with Rob Halford on vocals, Glenn Tipton on guitars, KK Downing on guitars, Ian Hill on bass, and John Hinch on drums. With Hinch leaving the band in 1975, Judas Priest formed a solid base thereafter for many years to come. From 1974 through 1979, the band had worked with four different drummers, but during 1979, they were joined by Dave Holland, who would stay with them for the next decade.

Having released several albums since 1974, and building a strong reputation, the band had some commercial success with their 1980 release British Steel. After a successful tour, Judas Priest was able to afford to go to the Ibiza Studios in Spain to record their next album. Over the months of October and November 1980, the band recorded their seventh studio album, Point Of Entry. Produced by Tom Allom and Judas Priest themselves, Point of Entry was unleashed on February 26, 1981 and now celebrates its 35th anniversary in 2016.

For fans already familiar with the Metal Gods previous work, it did not come as much of a surprise that it seemed the band was going back to the roots they planted with their first release in 1974 with Rocka Rolla. Although, what did come as a surprise with this album was the shorter and less aggressive, radio friendly songs. Despite this, the album went gold in the United States and reached #39 on the Billboard 200 list. While Point Of Entry is not Judas Priest’s highest-ranking album, it still has timeless songs that Priest fans cannot do without all these years later.

The first track on Point Of Entry kicks off with duel guitars ripping away. The heavy Rock driven beat of “Heading Out To The Highway” takes the listener on more than just a road trip journey. The lyrics also compare the highway to the curves and bends that life can take someone through. With Halford’s powerful operatic voice and the lyrics “wherever you turn, wherever you go, if you get it wrong, at least you can know, there’s miles and miles to put it back together!” the listener is reminded that there are always choices. The video that was released for this song did not portray the depth of the lyrics; instead it took a more lighthearted approach. The viewer was visually surprised to see the band was not as leather clad as fans had become accustomed to. During the scenes when the band is playing their instruments, Holland is wearing a dress shirt and tie under his simple leather jacket. While more surprising during the classic car-racing scenes, Halford was dressed in simple jeans and a tee shirt, with only two metal stud wrist bands.

The next song, “Don’t Go,” is the shortest song on the album at three minutes and seventeen seconds, but its deep feeling draws the listener in right away. The melody is seductive, yet the lyrics are an expression of pain. Hill holds down a strong back beat and, midway through the song, Downing breaks into a raging solo. The video for this song is visually the best representation of the band since they are all dressed in full leather and metal studs. Then, “Hot Rockin’” does just that; it rocks. It is a lighthearted song and the video that was released mirrored the lyrics. It starts out with Judas Priest working out in a gym and, before you know it, they are up on a stage, flaming instruments and all, playing to a crowd of head-banging fans.

“Turning Circles” gives the listener a very circular feeling with its repetitive melody and guitar riffs weaving in and out. After the song’s break, Halford comes back in with his powerful voice, bringing the circle back around singing, “I’m turning circles, so stay away, we’ve all got somethin’ wrong to say.” The endearing “Desert Plains” closes out side A. At four minutes and thirty seconds, it is the longest song on the album. This is also one of the band’s most iconic songs, and rightfully so. With its timeless, road-driven melody, it gives you the feeling of climbing onto a motorcycle and riding alongside Halford while on his quest. The song is complete with epic vocals and an awesome dueling guitar solo by Tipton and Downing.

Turning the album over to Side B, “Solar Angels” kicks it off. Again, this side starts the listener off with duel guitars playing and then the crack of the drums starts to give depth to this deep melodic song. This is the second longest song on the album but has the least amount of lyrics. The songs lyrics have openness to them and it gives way for the musicians to express the feeling of this song. Tipton plays an epic solo during the break of this song, and then Tipton and Downing do a small duel solo at the end of the song.

The remaining four songs were the ones on the album that seemed to of had less of an overall punch. “You Say Yes” does have a rocking melody and a cool break down the middle, but it just did not have the signature style listeners were used to. “All The Way” is a good time, party song, but, again, it did not have the classic signature. However, it did have its moments, including a nice guitar solo by Tipton. “Troubleshooter” started with a mean driving groove and a touch of sensuality that carried the song trough and a nice guitar solo break with Tipton soloing first, then Downing taking over. Ending Point of Entry is “On The Run.” Very upbeat, it showcased Halford’s powerful vocals as he smoothly hit some incredibly high notes.

Point of Entry was led by three singles, which also happened to be the first three tracks, “Heading Out To The Highway,” “Don’t Go,” and “Hot Rockin’.” Also, the singles had videos associated with them that fans waited up till midnight to see played on the Don Kirshner’s Rock Concert television show. Thankfully, now a days, all they need to do is purchase 2003’s Electric Eye DVD to reminiscence on the classic videos. In support of the album, Judas Priest did the extensive World Wide Blitz Tour in 1981, playing seventy-six shows from February to December of that year, including four sold out shows at the Palladium in New York City. In addition, the album’s cover art was also toned down, even subdued, compared to previous album covers that either had very intricate artwork or hardcore Heavy Metal images. In comparison, as mentioned earlier, the artwork had the simplicity of the cover artwork for Rocka Rolla. Interestingly enough, their was two different covers released for Point Of Entry, and some might say, while they both lacked luster, the North American/Japan version of the cover was a little more eye-catching.

Even though the band had some rough patches and personnel changes throughout the years, Judas Priest is still going strong over forty years later. In 1989, Scott Travis joined the band and has been their drummer ever since. In 1992 Rob Halford left the band and, in his place, Tim “Ripper” Owens held the position between 1996 and 2003 before Halford’s return in 2003. KK Downing left the band in 2011 to pursue different avenues and has been replaced by Richie Faulkner on guitar since. Fans will be elated to know that in March of this year, they can expect another release from the band in the way of a CD and DVD called Battle Cry. The new release will be live recordings and footage from their 2015 tour supporting their 2014 release of Redeemer Of Souls. With a rich history surrounding them, Judas Priest have no shortage of memories to share with listeners, and Point of Entry remains to be one of them. 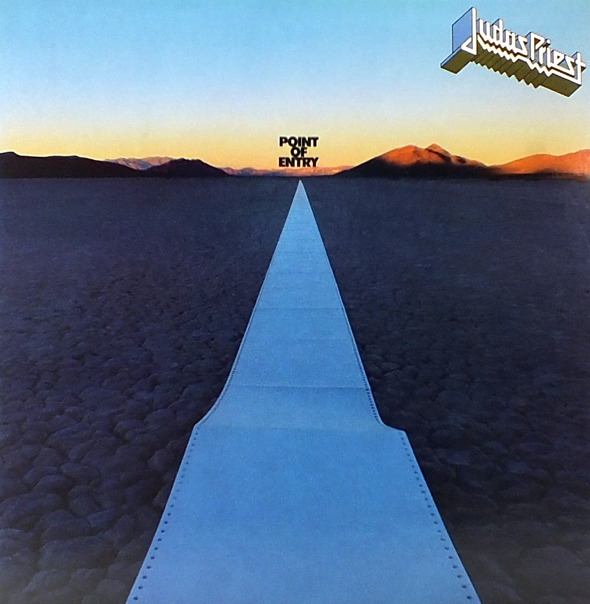 Purchase Point of Entry on CD on Amazon