Following along similar lines to American Mary (2012) and I Spit On Your Grave (2010), new Horror/Thriller Julia hit screens with a bang back in July 2014. Written and directed by Matthew A. Brown (Victim 2010, Crush 2011), Julia is his first feature film. While Julia shares elements to the above mentioned films, it certainly has its own style and direction. Filmed around New York, the cinematography by Bergsterinmn Bjorgulfsson (The Deep 2012, Black’s Game 2012), use a dark gritty approach, a somewhat Neo-noir style that is maintained expertly throughout the entirety of Julia. Ashley C. Williams (The Human Centipede 2009, Leaving Circadia 2014) plays Julia, the main focus of the story.

Julia is an attractive but not confident young woman who works as a cosmetic surgeon’s assistant, seeing blood on a daily basis. She seems to hide within herself, not showing any more than over-sized glasses and unkempt hair. She is invited to a young man, Piers’ (Ryan Cooper: The Great Gatsby 2013, Left Behind 2014), apartment one evening on the pretense of going out together. However, shortly after her arrival his intentions take a dark turn. After drinking a glass of wine, things get very fuzzy for Julia, but she manages to see another three men enter the apartment. The events are not shown at the time, but it is clear Julia has been brutally attacked and flash backs of this nightmare are shown at relevant times throughout the film. Julia struggles after the trauma and decides not to report it to the police or the hospital.

She disappears from work for a week and begins drinking each day at a local bar. One such day, she overhears a couple of women talking about one of their friends who was raped and found revenge through a man named The Therapist, a Doctor Sgundud (Jack Noseworthy: Breakdown 1997, U-571 2000) . The unconventional therapy is not just about vengeance, it is about stopping yourself from being a victim, and Julia finds the idea fascinating. She is stopped outside the bar by a mysterious woman named Sadie (Tahyna Tozzi: X-Men Origins: Wolverine 2009, Dead Space 2 2011), who tells Julia she can help her.

Julia is introduced to Dr. Sgundud, who makes the rules very clear: it must never be personal, this is about healing yourself and not being a victim and not giving anyone your power ever again, as the therapy forcibly tears you apart before putting you back together. However, if Julia at any point in time decides to take action into her own hands and makes the matter personal, she will pay a terrible price. Sadie introduces Julia into her world, and a group of other woman in similar situations. Julia starts changing into a more confident woman, and for the first time in her life, feels like she is not hiding anymore. By night, Sadie trains Julia to become an avenger of justice against men. By day, Julia continues to work albeit distracted at the cosmetic surgeon’s office. Scene by scene, Julia transforms, readily embracing the escalating violence she and the others inflict at night: convincing men to go with them outside, leading them on, then once they are alone, beating or humiliating them. Each time Julia hurts a man, she purges her rage and loses her victim mentality.

Sadie and Julia begin an intense relationship and combined with the extreme therapy, Julia is happy for a while as the new her merges with the old one. This does not prevent her from having horrible memories of her own rape, which she was not meant to survive, and this starts to threaten her newfound confidence and relationships. Julia is sated by the nightly attacks until one of her attackers contacts her, suffering from remorse. More and more, Julia is dissatisfied with allowing the men to go free and sets her own path for vengeance, which changes the course of her fate. Being totally swept up in this new life has left little of the old Julia, but her sessions with the Therapist reveal why Julia was hiding to begin with. With Julia hell bent on her own bloody retribution, it is unclear how far she is willing to go, despite the risks to her own life. Will Sadie stay by her side or be her downfall? Will Julia get her vengeance before it is too late for her?

With strong anti-male and positive lesbian undertones, the violence and gore in Julia is not for the fainthearted. All men in the film are portrayed in a negative, evil and particularly primitive light, all of which meet terrifying fates at the hands of Julia and her new friends. There are certain scenes that will cause male viewers to protect their private parts for months to come. In fact, one such scene caused a male viewer to pass out during the US premiere at Screamfest in Los Angeles. Having said that, Julia is a unique, visceral story with action from the beginning to the end. Its dense, edgy feel makes the viewer feel as if they are watching the events in a smoke filled bar late at night, as the filmmakers do a brilliant job at portraying the incredible depth and layers that the character has.

Williams has an amazing ability to adapt and change in each scene and pour real emotion into the story. plays the mysterious Therapist, whose identity is not revealed until the end, so well that a movie revolving around him would be an interesting concept. well acted and accompanied by an eerie soundtrack, the special effects in the film minimally utilizing a show and not tell aspect of storytelling, proving the things one does not see are much scarier than the ones the things they do. There are plenty of twists and turns, making Julia a must watch movie for the open-minded viewer. CrypticRock this movie 5 out of 5 stars. 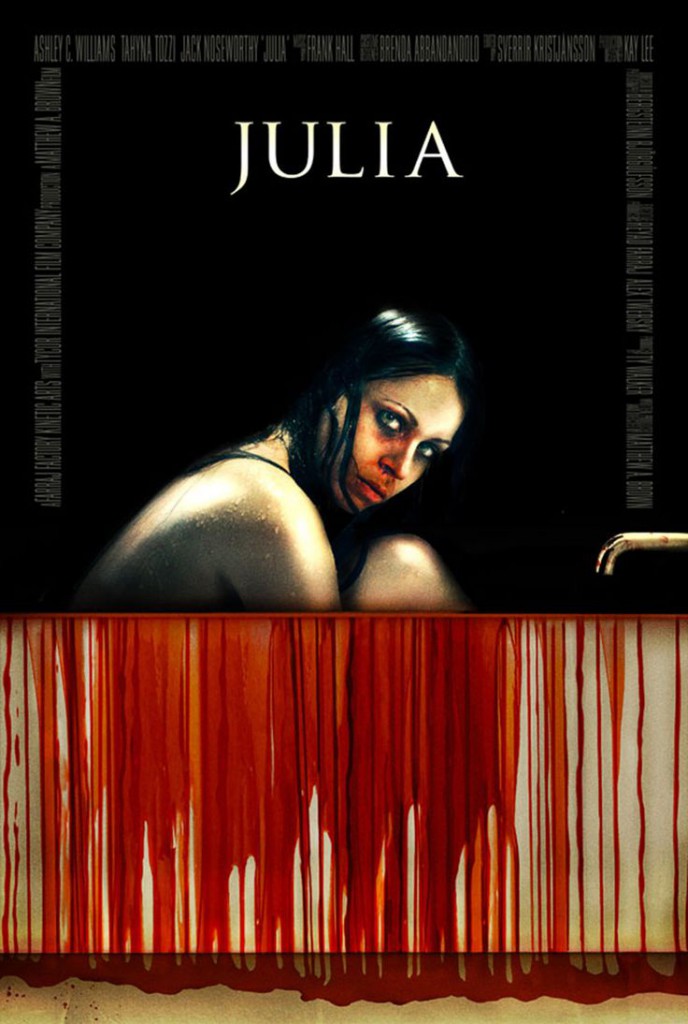