When a junkie dies, where do they go? What does their version of “Heaven” and “Hell” really look like? Is Heaven a place filled with junkie friends, an endless supply of drugs, and the guarantee of never overdosing; or is it the addict’s desire to get clean and return to the healthier, more improved versions of themselves they used to be before their addictions reduced them to the morally corrupt degenerates they have now become? Since Heaven and Hell are subjective, maybe junkies begin in limbo and have to venture through their own personal Hell before they are able to achieve redemption and ultimately reach their ideal of Heaven.

Junkie Heaven is a compelling, dramatic short film written by Lee Kolinsky (Send No Flowers 2013, Stand Up Guy 2016) and directed by Steve Sage Goldberg (Bullified 2013), that initially premiered at film festivals on July 3, 2015. It has since spent the last two years on the film festival circuit where it has won numerous awards, and even started streaming on IndieFlix.com in May of 2017. It was made via Steve Sage Productions and currently awaits wider distribution; for which details have yet to be released.

This movie is a brief, yet incredibly impactful glimpse into the disturbing reality of addiction born from self-medicating the debilitating symptoms of PTSD. It tells the story of heroin-addicted, Iraq Veteran, Doyle Burkett (Halsey), who is visited by an entity, Alexander (Rendino), after a night of hard partying and excessive heroin abuse that seemingly resulted in his overdosing. Alexander presents Doyle with the opportunity to “change the tide of an ancient war;” but first Doyle must take down the notorious drug dealer, Tommy (Cardona), and his gang, in order to obtain the special blade that is necessary for them to win the war. Add to the plot some flashing bright lights, overwhelming temptations, a gut-rumbling score, and the unpredictability of a junkie, and viewers are guaranteed a front row seat to what assumedly could be a crash and burn mission of epic proportions.

Firstly, it should be taken into consideration that playing a junkie is actually incredibly challenging for anyone to do; it tends to either be overwhelmingly exaggerated or disappointingly inauthentic. Even if the role is portrayed by someone that has ever struggled with a similar addiction, addicts cannot see themselves from the outside looking in, and therefore, they do not know or even remember the extremes of their behaviors. This can result in their performance being melodramatic or underwhelming based on their perception of themselves during their addiction; just as if someone that has never struggled with addiction or has ever known anyone that has can either overact or under-act the role and make it feel disingenuous. With that being said, the acting in this film was overall adequate, given the notable difficulty in playing this type of role, and Halsey stole the show with his cut above depiction of Doyle.

The cinematography was handled very well, and the symbolic elements and subtle climatic clues were greatly appreciated. The constant light blue luminescence was beautiful, and invoked feelings of both sadness and hope. In dreams, seeing the color light blue is representative of moral values and high standards, open-mindedness, and steadfastness of purpose. Alexander was even seen wearing a blue shirt beneath his black suit; and black clothes in one’s dream are indicative of hidden and unconscious feelings.

The theme was absolutely the most significant component of this film because it touched on the heartrendingly real truth that addiction is not only common in soldiers suffering from PTSD as a result of combat, but it can, and usually will, put them in a painfully self-destructive downward spiral that ceases to end until their life does.

With more than a few favorable factors, as well as shedding light on an actuality that many people both inside and outside of the military cannot even begin to understand, CrypticRock gives Junkie Heaven 4 out of 5 stars. 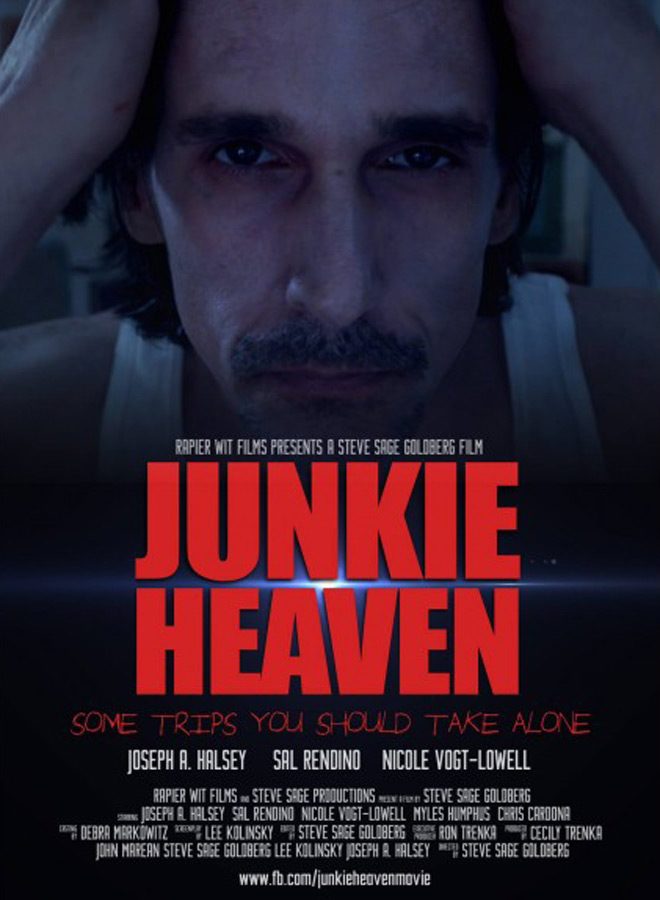