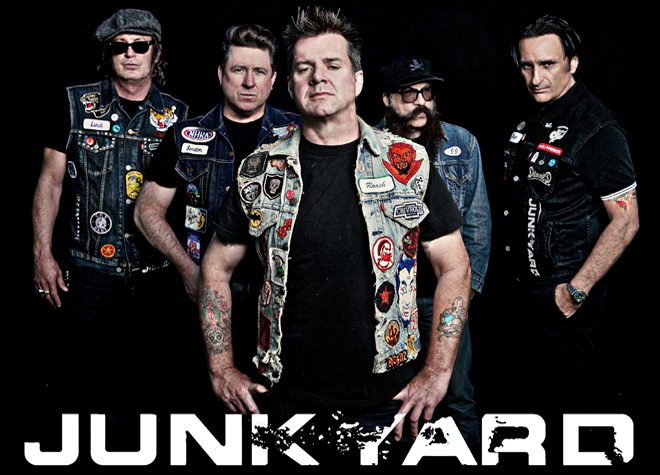 Trapped amidst the hype of the late ’80s Glam Metal and Rock scene, out came a unique and flavorful biker Blues Hard Rock band known as Junkyard. While they faded into grey for quite a few years in the ’90s, when Grunge reared its dominating  head, they since regrouped in 2000, actively touring to this day. Currently comprised of founding Vocalist David Roach along with Drummer Patrick Muzingo, they are joined by longtime Bassist Todd Muscat as well as Guitarists Tim Mosher and Jimmy James. So besides going out and playing live, what are the boys in Junkyard up to in 2017?

Well, to much surprise they are set to release their first full-length record in 26 years on April 21st of 2017 when they drop High Water. Released via Acetate Records, High Water even features writing and lead guitar credits from founding Junkyard Guitarist Brian Baker, who no longer performs live with the band, dedicating himself to playing with Bad Religion. Complete with eleven standard and five bonus tracks, is High Water the triumphant return of Junkyard fans hope for?

Bold questions, the songs of High Water tend to have a lighthearted feel but with a hard-hitting flair. That said, album opener, “Walk Away” is not a far cry from what one might expect. A good setup, it eases listeners into the rest of the album with stylistic guitar twang and harsh vocals. Then there is “Faded,” which has a catchy nature about it, but seems very typical and slightly dated. Changing it up, on “Styrofoam Cup,” Junkyard oddly and abruptly switch from VH1 to the Country Rock channel. Not at all a bad diversion, the creative bluesy base cut is strong, yet it seems to dissipate into no man’s land with its simple rhyme driven lyrics and slowed pace.

About midway through, “W.F.L.W.F.” picks up the pace. Abbreviated for “We Fuck Like We Fight,” this tune has the power to light up a dark day in a fun, down to earth, and direct way. Of course the band shift gears once more and “Don’t Give A Damn” jumps right back into catchy Country top forty hit land. Thereafter, anthem time arrives with “Hell or High Water,” and while it fits perfectly, it does not really strike an unusual cord in any way, yet perhaps it could be argued that the simple attitude brings out the best Junkyard face.

Keeping the album interesting as they move along, the witty, fun jam “Wallet” is another short but sweet number bringing the more Punk Rock side out of Junkyard. The ideology behind the lyrics prove to be a worthy one and the music conscientiously follows suit. The Hollywood walk of shame, day after wallet chase never fails to entertain and neither does Junkyard. This leads into the final two songs, which once again bring back the Blues Rock feel along with a raw natured Hair Metal-esque vocal range, similarity in style to that of Ratt’s Stephen Pearcy. Rounding out with “Kindness to the Dead,” the guitar solo work is particularly ideal while the lyrics are quite bold and catchy at the same time, possessing deeper meaning. At just under four minutes, it rings out with strong riffs and vocal heaviness, making it an album highlight.

Seeing Junkyard live is always a blast as they deliver the goods with an extra special packed punch. As far as waiting twenty-six years for a full album goes, it really was not as harsh or difficult a task seeing how often they play out live to their dedicated followers. On a majority rules voting scale, it must be said that taking a Country direction may puzzle some fans, but this is a band that defies genres. It also must be said that there are in fact some real gems on High Water that boast Junkyard’s best qualities which are unique, catchy, fun, light-hearted, tough, and bold. All this in mind, there is something for every Junkyard fan on High Water. Without further abating, CrypticRock gives Junkyard’s High Water 3.5 out of 5 stars. 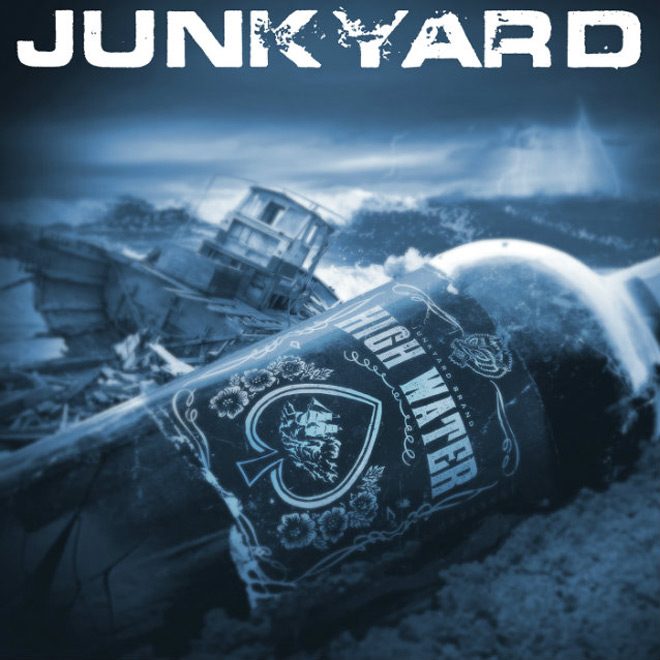