To a select population, the term Goth is a way of life. In the realm of music, there have been some great Goth Rock, Metal, and Alternative bands to grace the Earth through the years including Type O Negative, The Cure, Bauhaus, The Mission, The Sisters Of Mercy, and The Damned, just to name a few. All that in mind, how about Finland’s very own The 69 Eyes?

Certainly a worthy mention as one of the top Goth-laden Rock-n-Roll bands to hit the scene in the past three decades, they have forever and always been led by the unmistakable voice of Jyrki 69. A lifelong rocker, Jyrki 69 has been crooning at a top level for years. Leading The 69 Eyes to international success, he has also dabbled in several other endeavors including the more Rockabilly The 69 Cats, and of course, his solo material. A native to the wonderful city of Helsinki, but with love for America, Jyrki 69 has been eager to get back across the ocean for some time, and fortunately for fans he did just that with his most recent visit to the West Coast with MGT.

A brief, yet exciting, tour, it all kicked off in Mesa, Arizona on March 9th before visiting several cities on the West Coast. Then, on Wednesday, March 21st, the run of shows came to a dramatic conclusion at Whisky A Go Go in Los Angeles, California. A fitting spot to wrap up the tour, The Whisky A Go Go is the most popular spot for pay-to-play usually, and there are a bunch of supporting acts before the main headliner. As a result, shows typically starts around 6:30 PM or so, however, on this occasion, there were only two opening bands – Sliver, which was a Nirvana cover band, and the eclectic group called The Blood Wisdom. Both very different stylistically then the main acts, they made for an interesting start to the evening.

Following the warm-up, and fitting right into the Gothic Rock world, MGT graced the stage to an exciting reception. A musical project consisting of South African native Ashton Nyte on vocals, a member of The Awakening, along with English based Mark Gemini Thwaite, best known for his guitar work in The Mission and Peter Murphy, joining them was Bassist Rich Vernon (The Mission) and Jared Shavelson on drums, a performer who apparently joined their band a mere 48 hours before the show, yet miraculously gelled together, putting on a killer show.

Labelmates with Jyrki 69 on Los Angeles based Cleopatra Records, MGT played a lengthy set featuring a few pleasurable Gothic hits off their latest album, 2018’s Gemini Nyte, and their 2016 debut, Volumes. Amongst the songs performed, they included favorites such as “The Reaping,” “Everything Undone,” “All The Broken Things,” and “Dystopia,” which featured a very special guest performance from Fear Factory’s Burton C. Bell. A wonderful surprise, they also offered a cover of The Awakening cut called “Fault,” which was yet another enjoyable dark treat.

Attracting a sizable crowd, and gaining a few new fans along the way, MGT continues to grow as a known name around the scene. Having only really been around under the name MGT for a couple years, Thwaite’s long history precedes him, including collaborations with other vocalists such as Tricky, and Al Jourgensen from Ministry. With the deeply erotic vocal tone in perfect pitch Nyte provides, there was never a dull moment despite his very somber, sweet, and Gothic stage presence. Furthermore, Thwaite brought the best style of Gothic Rock guitar work to the stage with precision and passion. Anyone who gets a chance to check them out, MGT are guaranteed to charm you with intriguing music and lyrical subject matter about the state of the world today. Simply put, pick up Gemini Nyte and hope they do more touring soon! 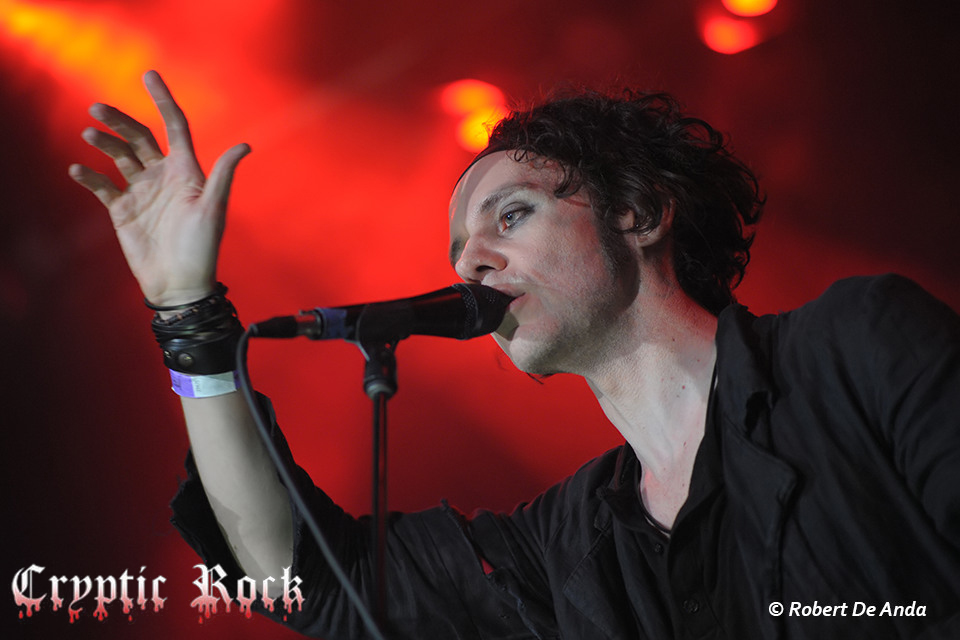 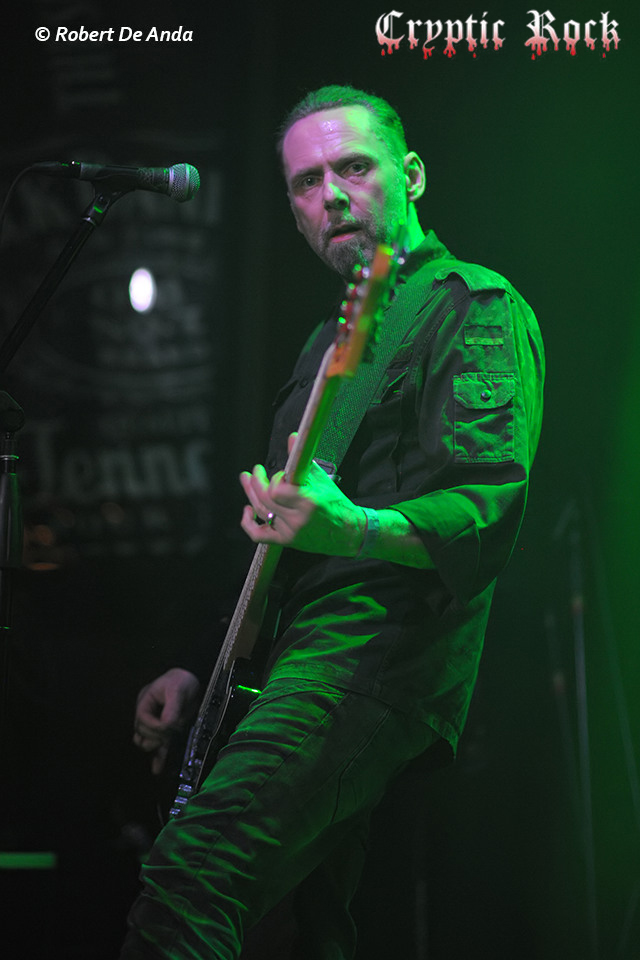 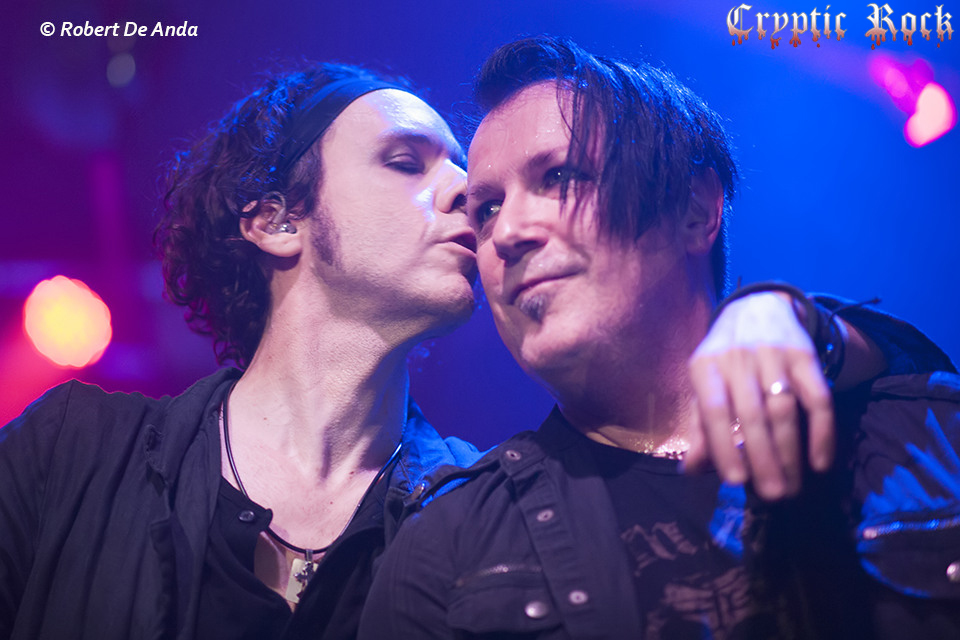 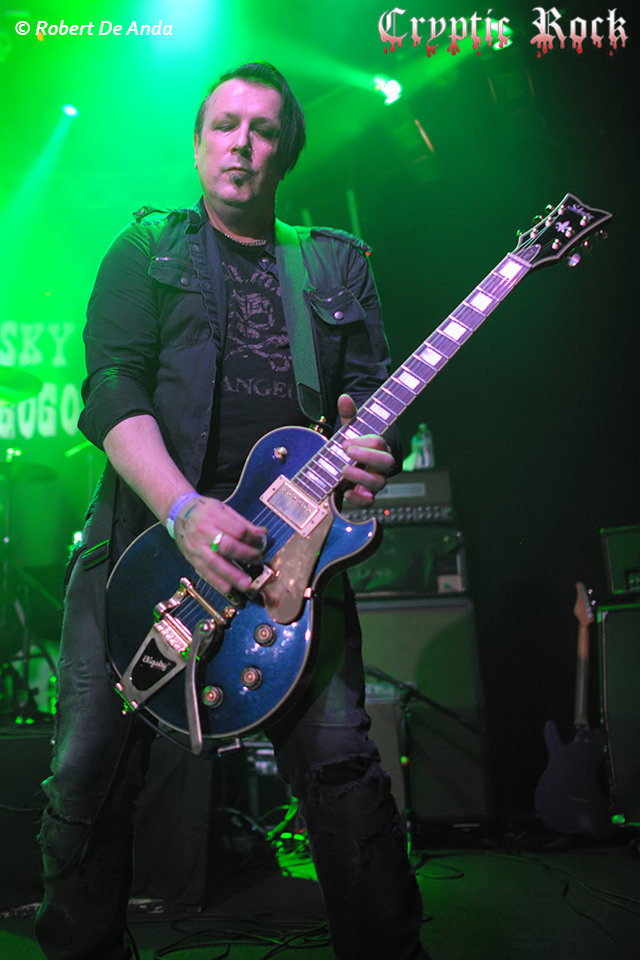 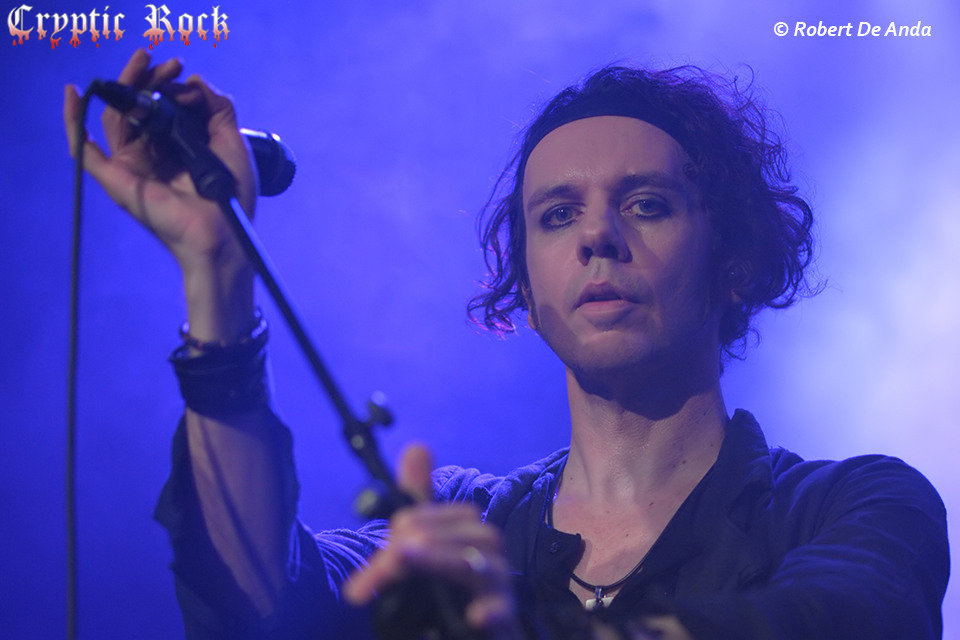 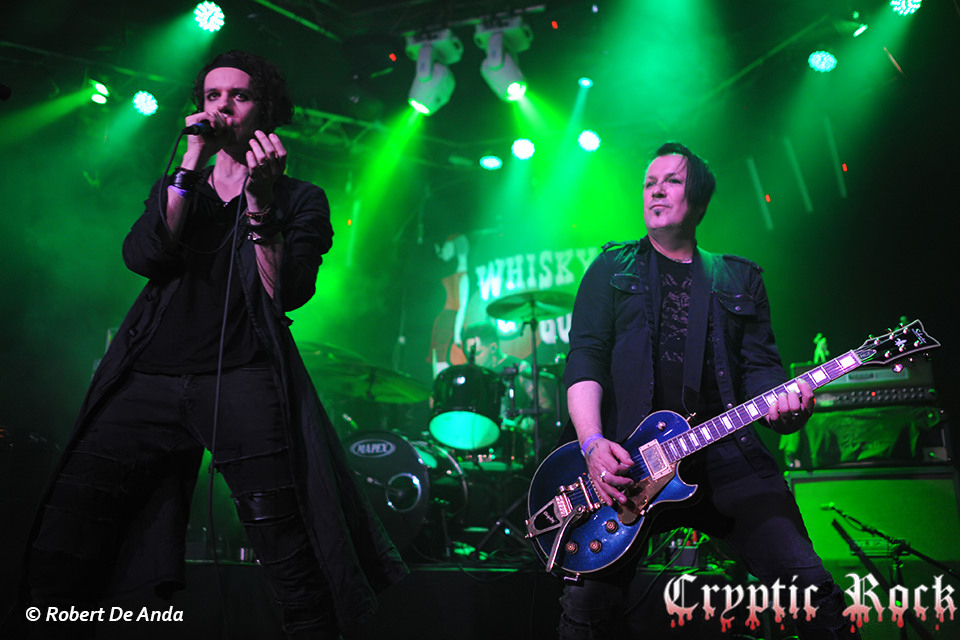 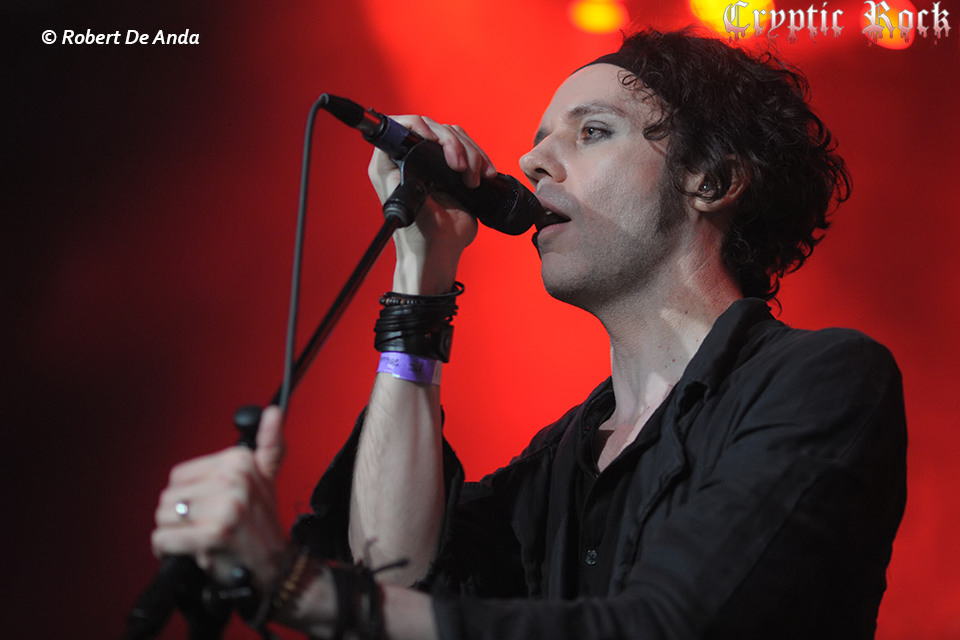 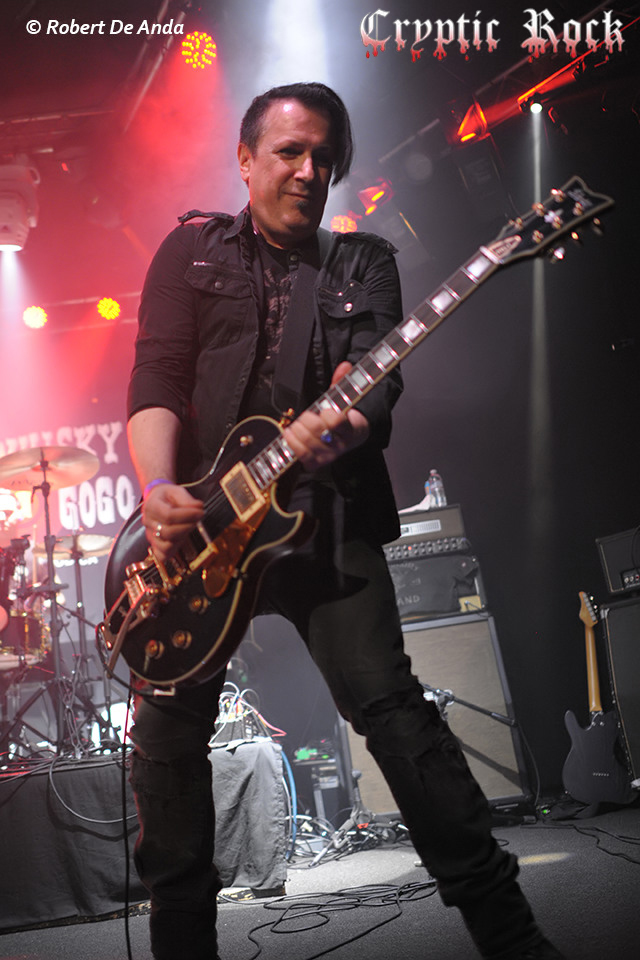 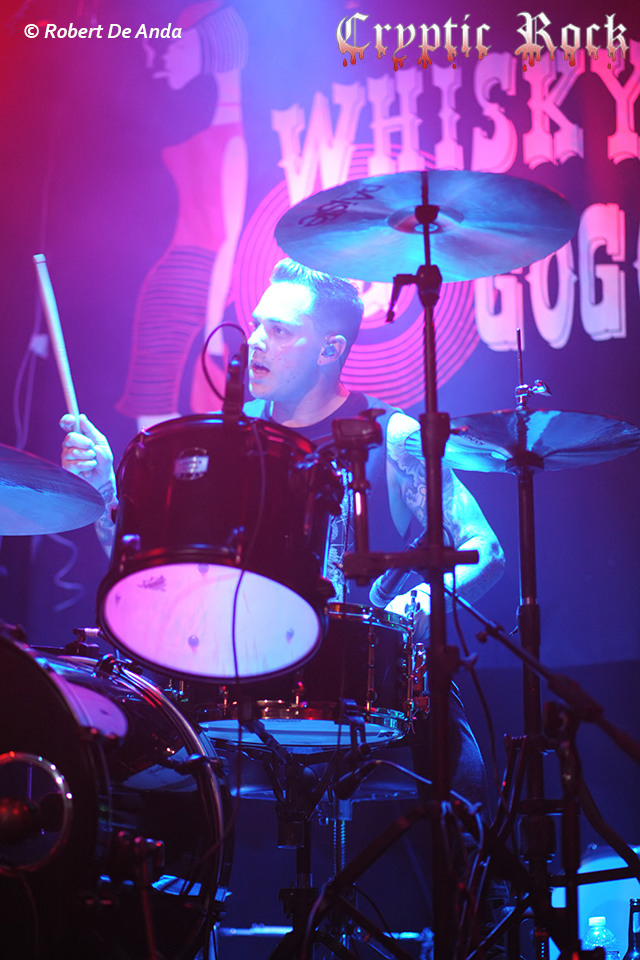 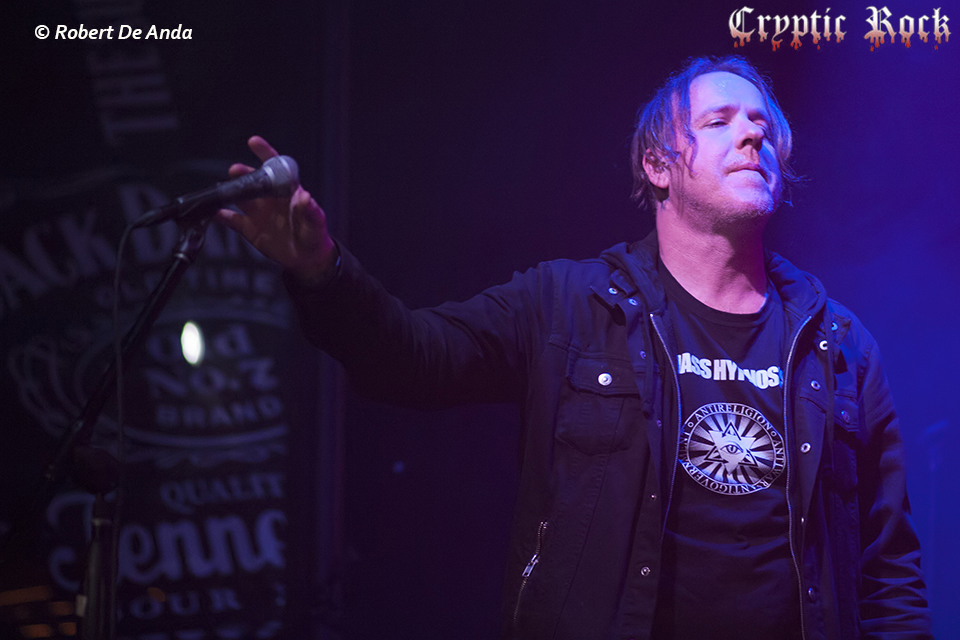 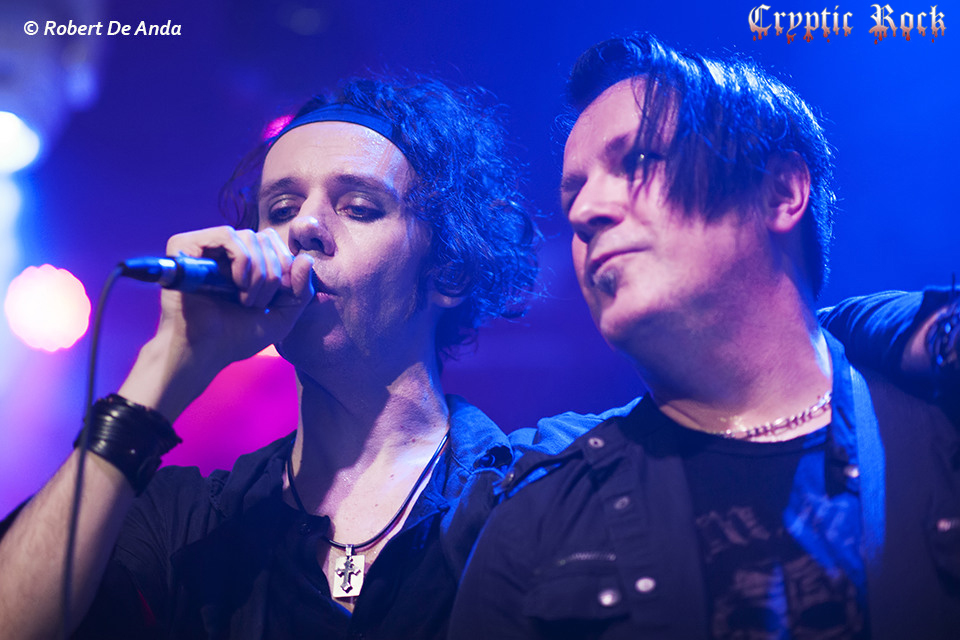 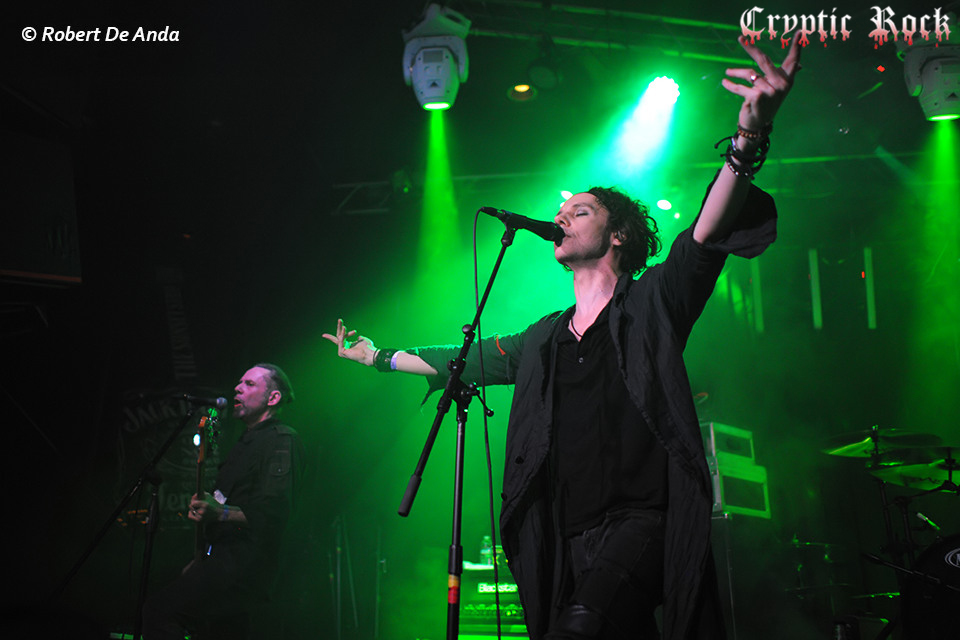 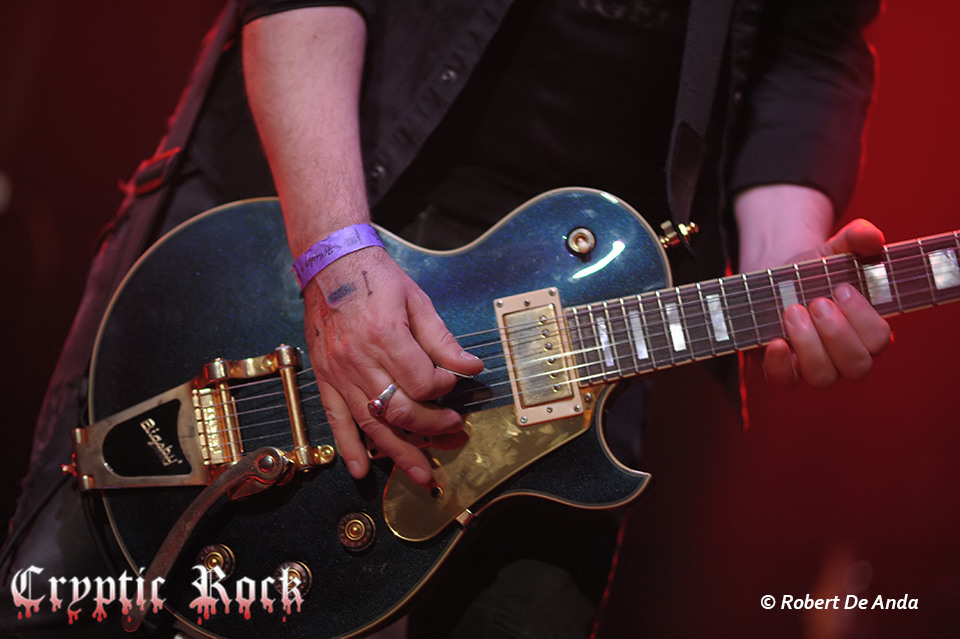 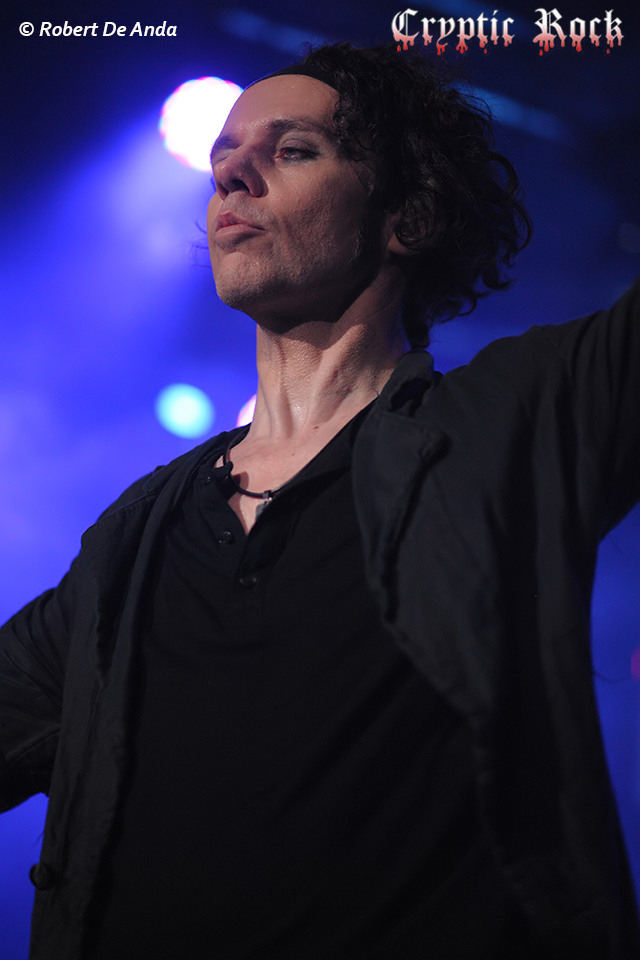 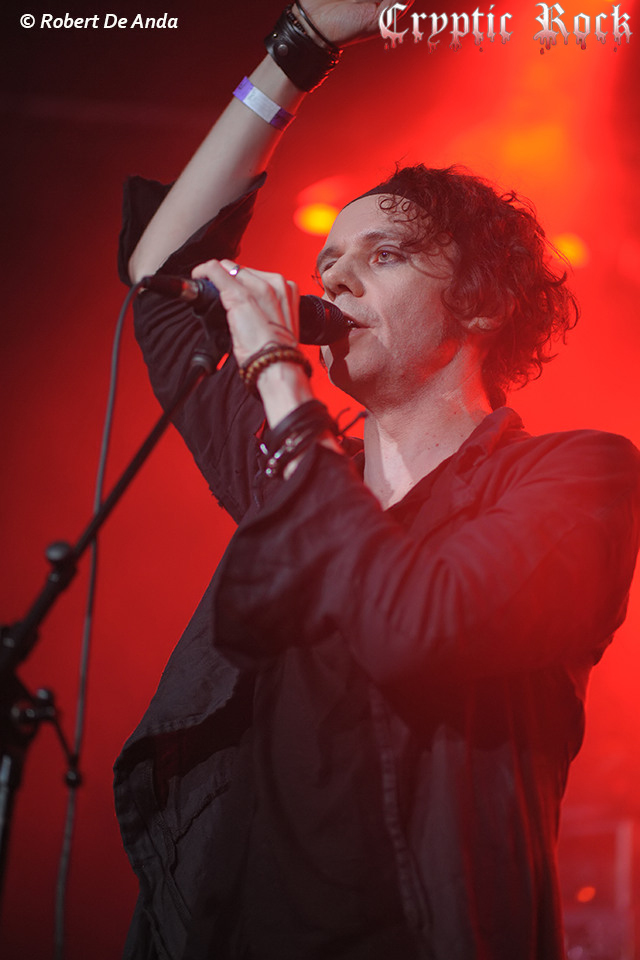 With a generous amount of time in between, Jyrki 69 was set to cast a shadow on the already dark evening. Supporting his 2017 solo album, Helinski Vampire, Jyrki grabbed the stage by the horns, making the most of the rare US appearance. Rightfully excited to play his new solo music, he also acknowledged the dedicated fans’ desires too, playing some of the most beloved The 69 Eyes tunes along with a variety of interesting covers, adding his own flavor into the mix.

Although Jyrki traveled all the way from Finland, he shared the stage with some of Los Angeles’ local musicians including Madlife’s Kyle Cunningham on drums, Faster Pussycat’s Ace Von Johnson on guitar, and DevilDriver’s Diego “Ashes” Ibarra on bass, rounding out a tight group of helpful vampires. Wasting no time to get everyone’s temperature rising, Jyrki started off with 1987’s The Lost Boys film classic “Cry Little Sister” before swaying into his original tune, “Last Halloween.”

Mixing and matching, and having a good time, his other solo song “Spanish Steps” was certainly a highlight, engaging the audience. However, the most interesting out of the box cover they played was actually The Doors’ hit “People Are Strange.” Much like Echo and the Bunnymen’s cover, Jyrki performed a Goth rendition at The Whisky A Go Go; a venue legendary Doors Vocalist Jim Morrison played so many times during his all too short career.

Keeping the atmosphere dark, Jyrki went into a great version of  Danzig’s “Twist Of Cain” and an interesting cover of The Ramones’ “I Just Want To Have Something To Do” where he proceeded to invite his friends Ronnie Sweetheart of The Throbs and Danny Nordahl of Faster Pussycat to join him. Prior to this fun fiasco, as alluded to, he played “Dead Girls Are Easy,” a favorite from The 69 Eyes catalogue. Vocals as strong as ever, Jyrki additionally surprised the audience with a beautiful take on The Sisters Of Mercy’s “This Corrosion,” bringing back fond memories from the old days of Goth Rock.

A diverse and carefully picked set, Jyrki 69 and friends made a strong impact as a collective unit. This was especially true with the massive hard hits and super creative flavored drumming of Cunningham. Von Johnson and Ashes also fit the bill just fine, providing the low notes that soared over the audience and brushed the house walls. As always, Jyrki himself was a joy to watch as he rocks out in his fitted leather jacket and dark shades.

As a true night owl, Jyrki 69 puts on an highly entertaining show – picture a vampire version of Elvis taking over the Sunset Strip. Unfortunately the tour is now over, but hopefully Jyrki 69 and MGT can reconnect for more shows in the future, extending across the midwest and to the east coast. Afterall, it is a night of music full of darkly seductive charm no one will want to miss. 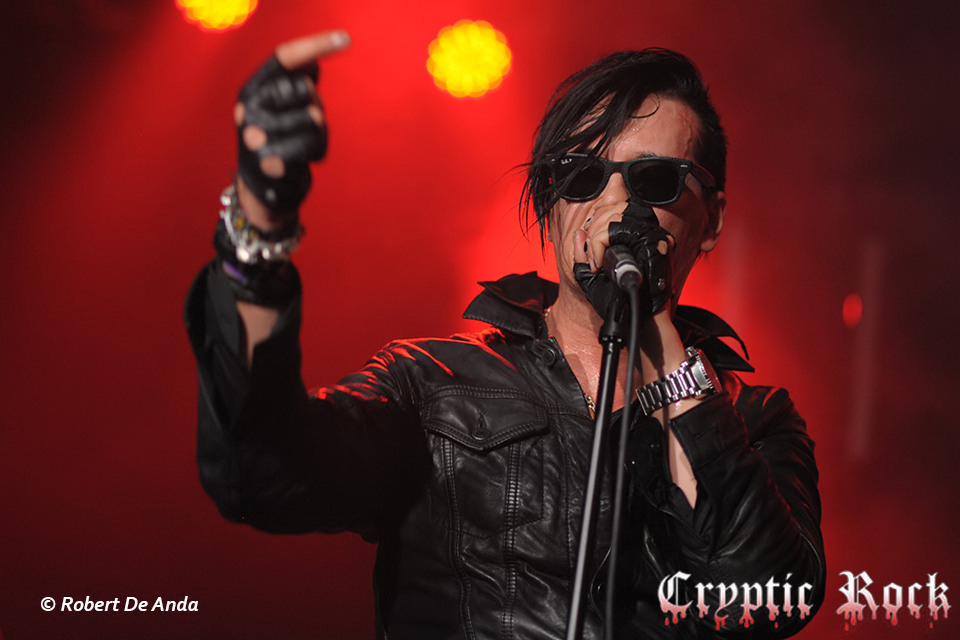 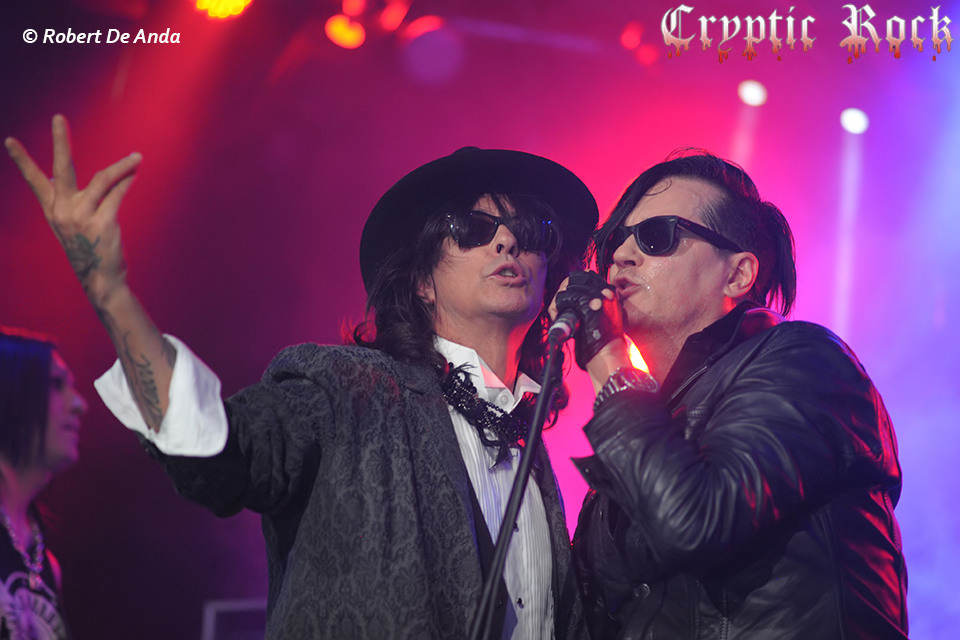 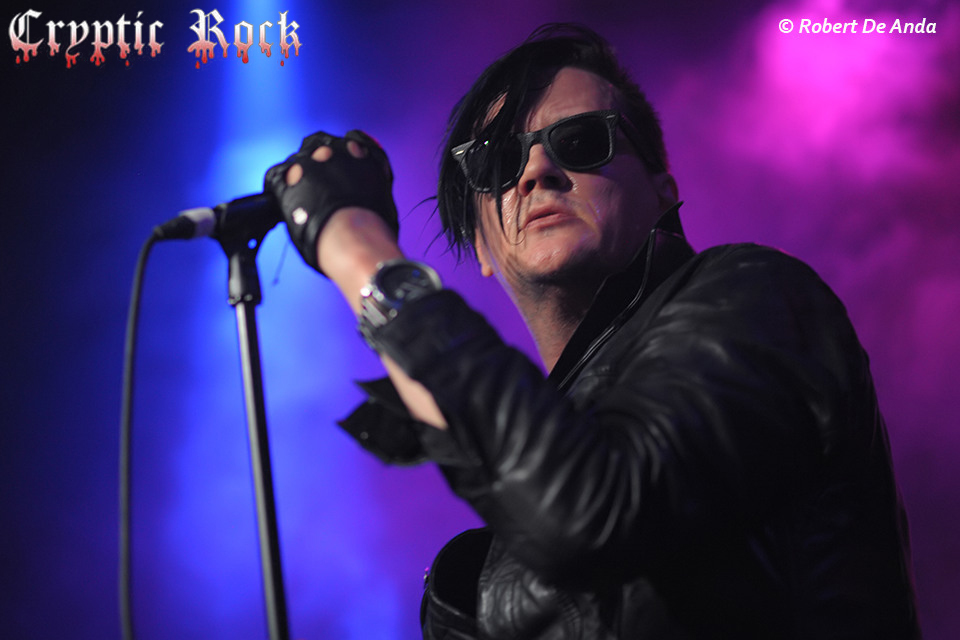 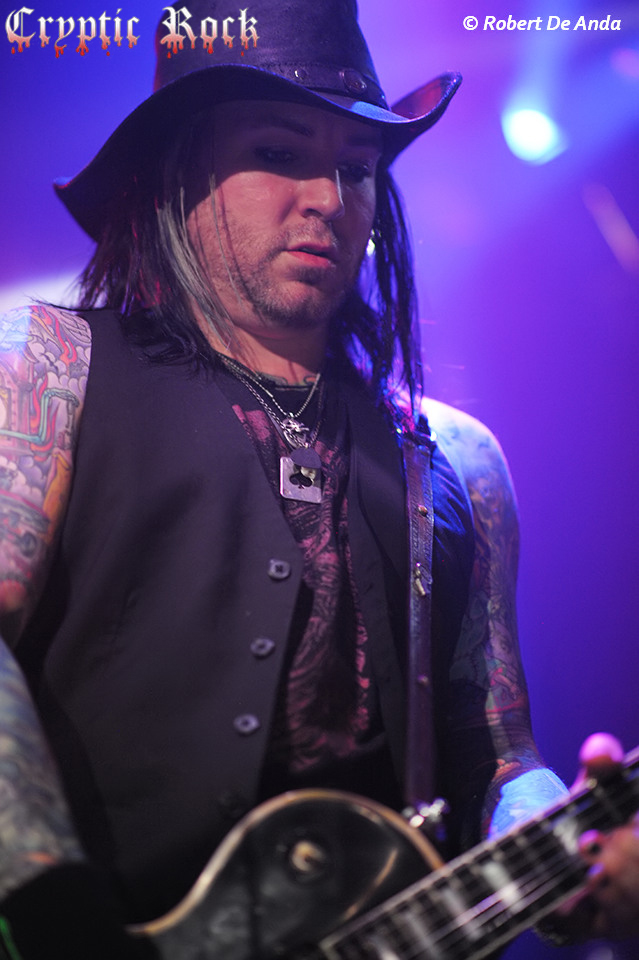 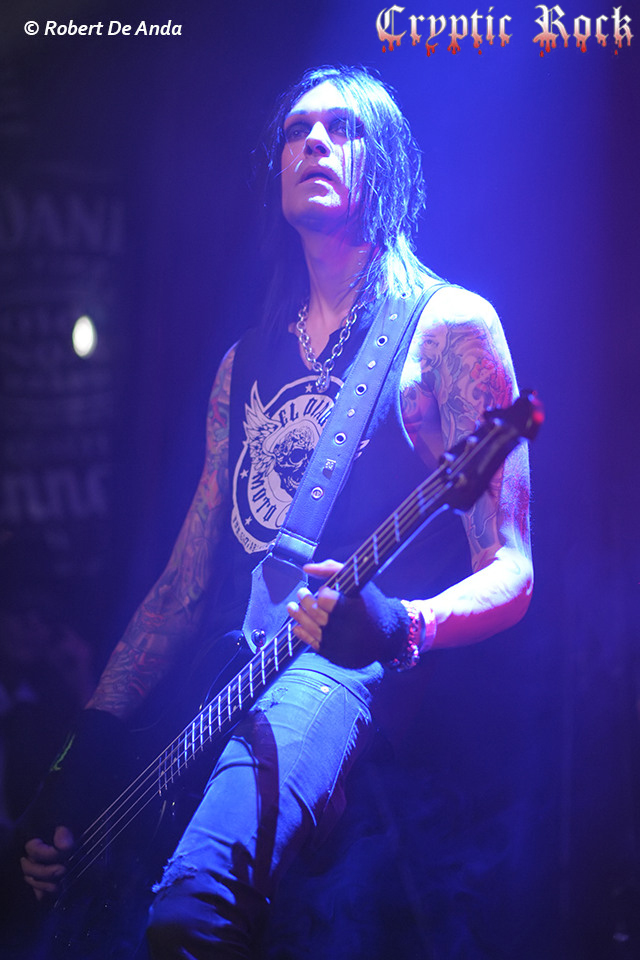 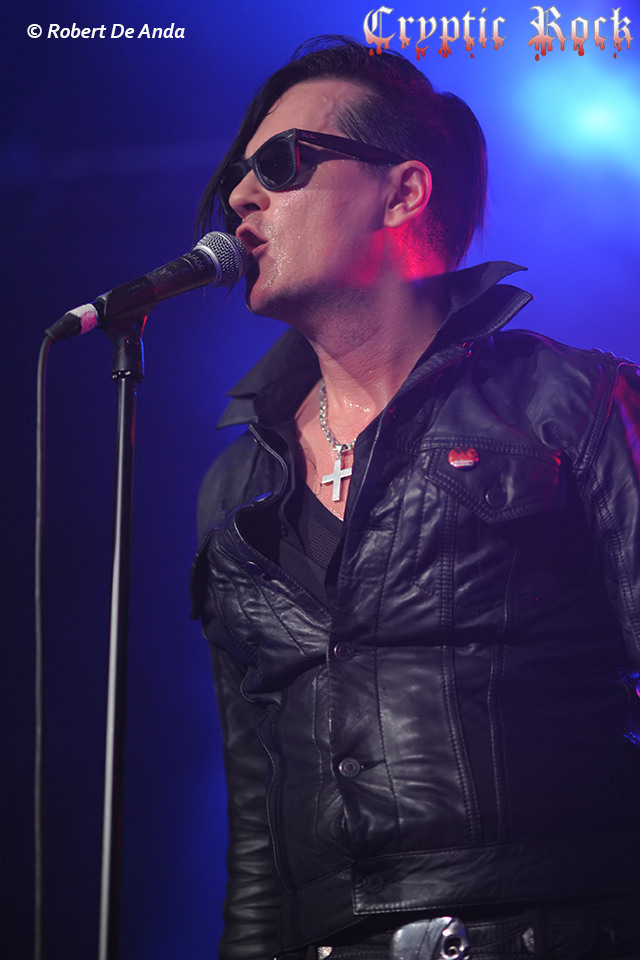 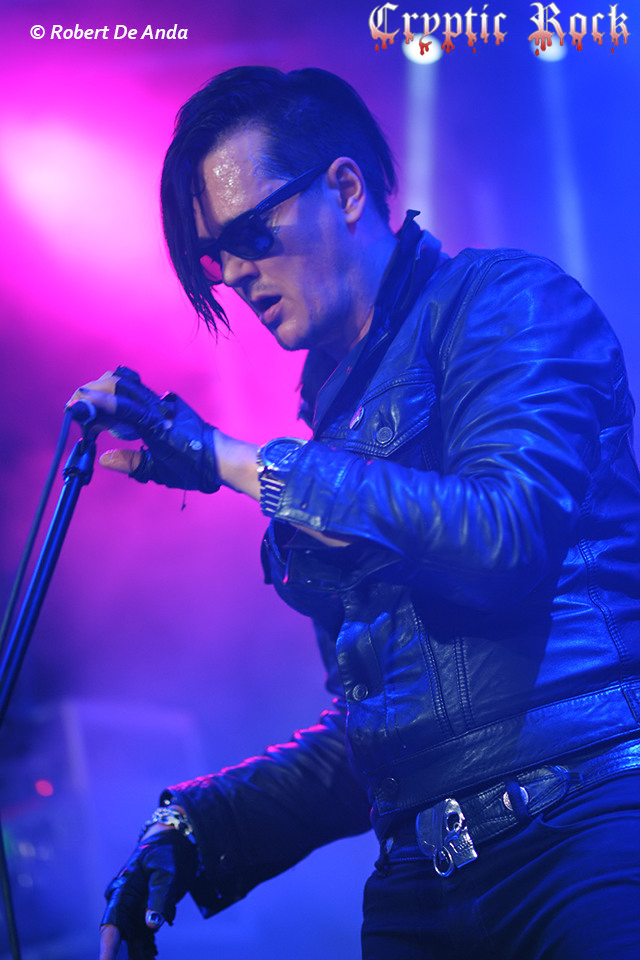 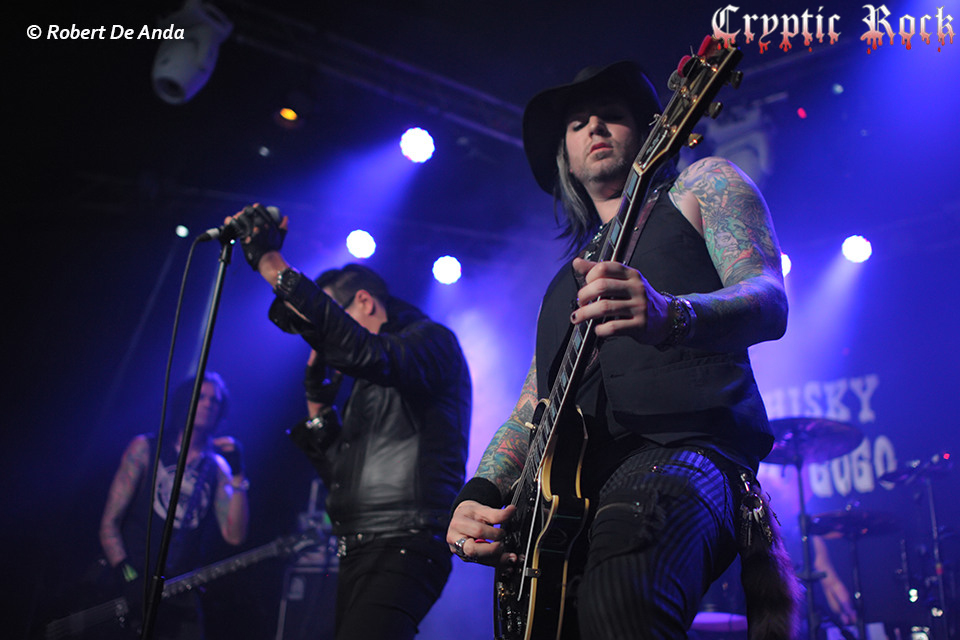 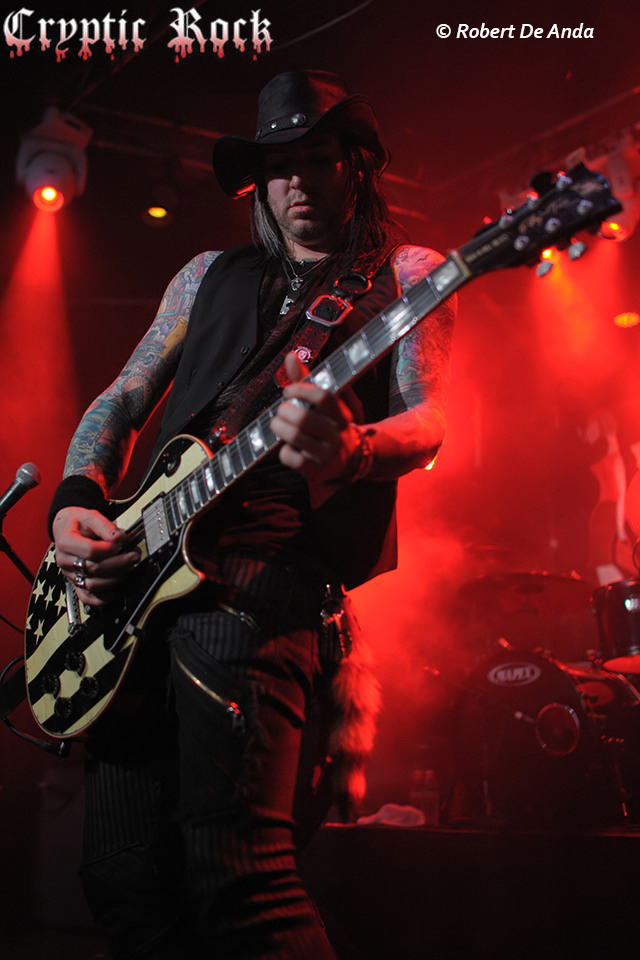 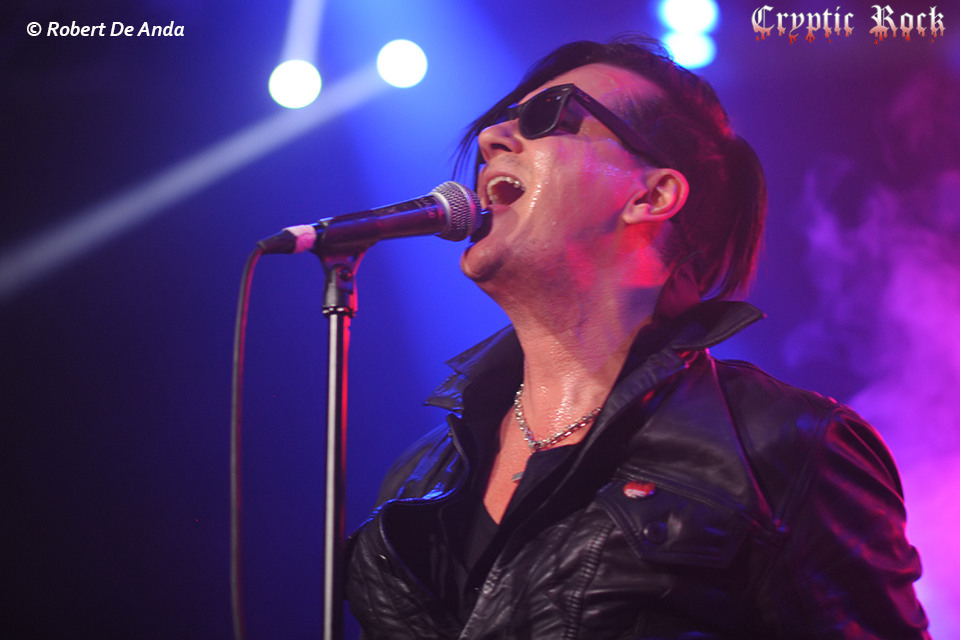 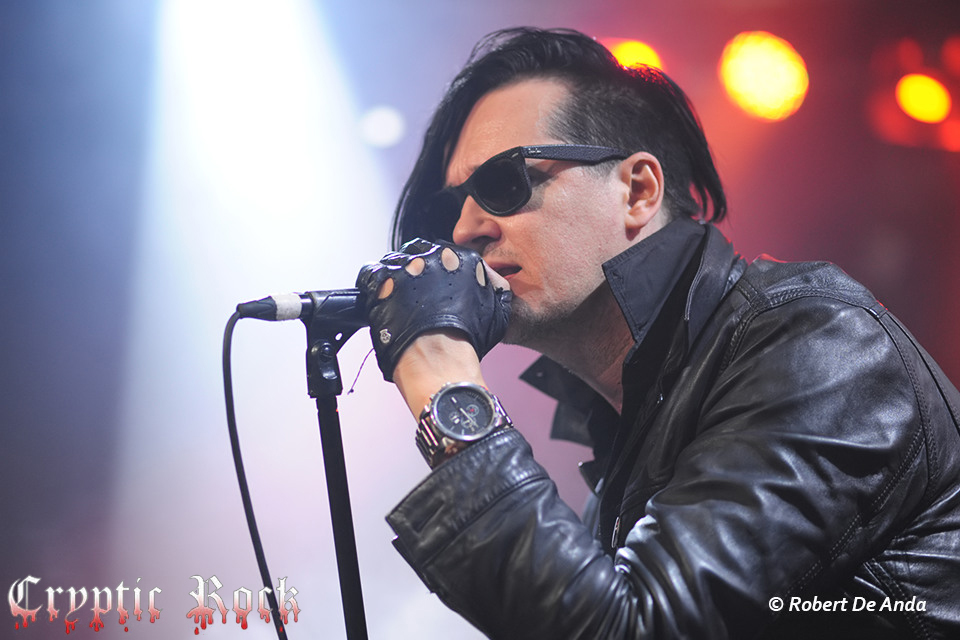 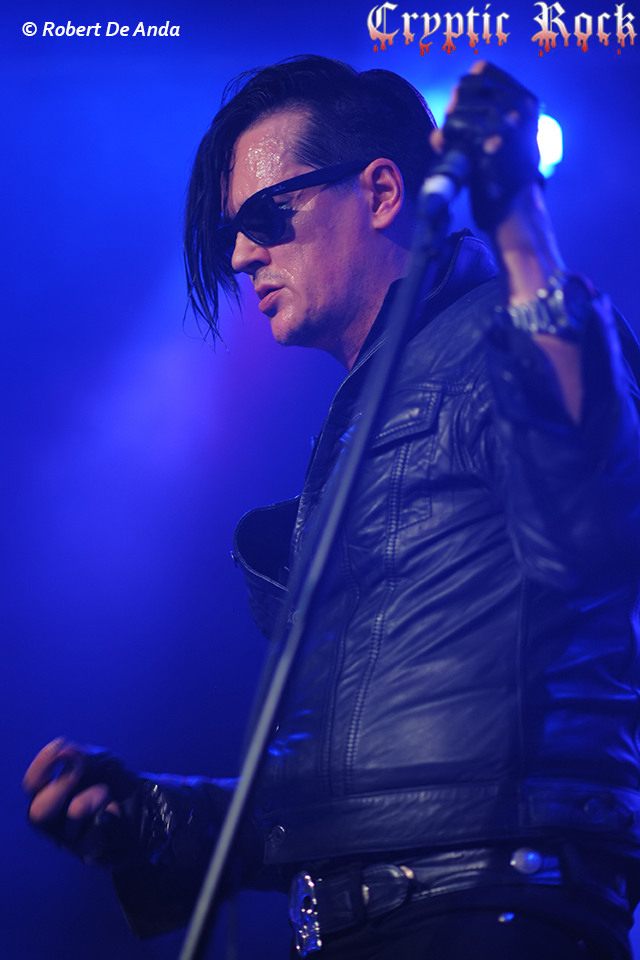 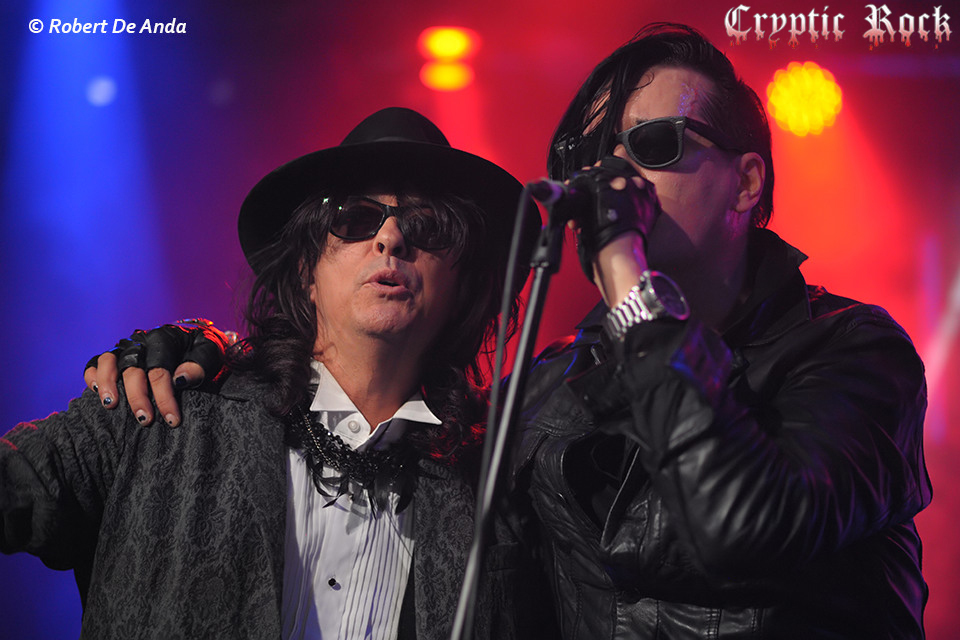 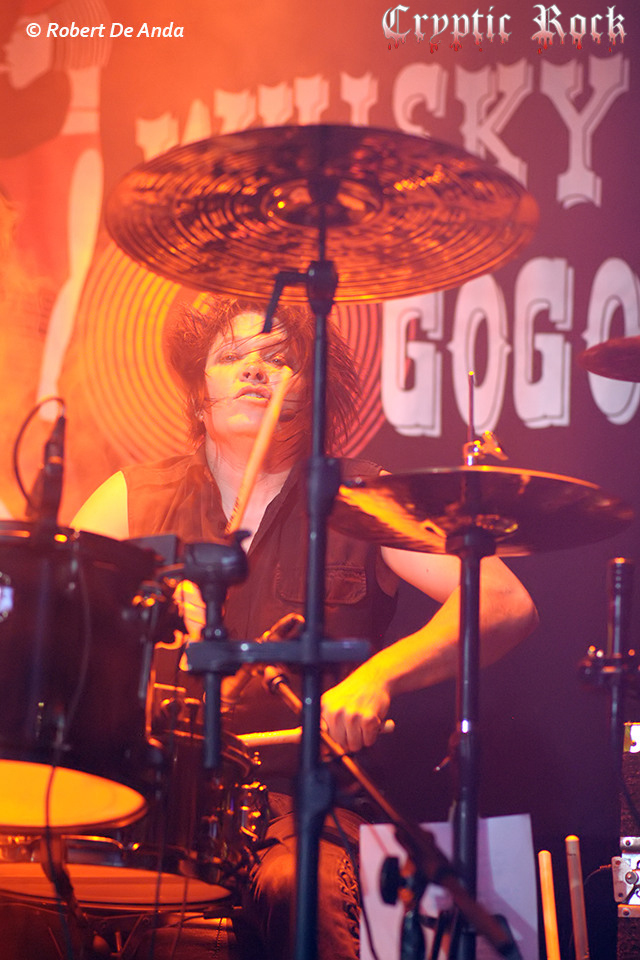