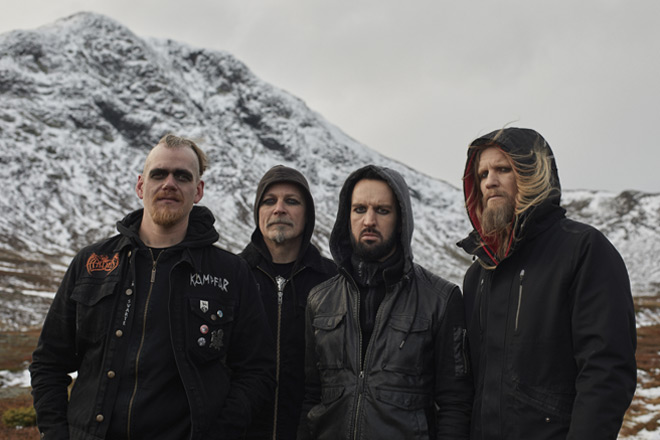 In all genres, there is music that is transient and forgettable. It merely serves the present, and soon fades. Then there is music that elevates the consciousness of the listener, etching itself into the fabric of our beings like rivers carve a path through mountains. Kampfar, one of the more unique iterations of Norwegian Black Metal, has always been firmly in the latter camp.

On Friday, May 3, 2019, the boundary-pushing collective will release their eighth studio album, and third for Indie Recordings. Entitled Ofidians Manifest, it comes following a brief period of uncertainty within the band’s ranks. Considering the strength of 2015’s wickedly delicious Profan album, will Ofidians Manifest allow Kampfar to regain the trajectory of success that has heretofore come so naturally to them?

Perhaps no classic early ’90s Black Metal band not named Enslaved has been so unafraid to stretch for the genre’s edges – yet still remain inside those bounds – with as much alacrity as Kampfar. Mayhem and 1349 did it, but they jarred their fan base at times with abrupt detours into differing styles of music. Letting Ofidians Manifest play out chronologically, the listener hears a high-speed thrasher in opener “Syndefall” transition to the video-enhanced single “Ofidian,” a song meant to offer a glimpse inside the personal struggles endured by singer, founder, and Kampfar mastermind Per-Joar “Dolk” Spydevold. This song moves like a serpent, driving while it slithers, building up while it squirms into the shadows. It is a departure, but a natural and measured one.

Dolk has of late introduced a deceptively tuneful, robust clean register to his normally raspy throat. The addition of this vocal style brings to mind the highly overused term ‘epic.’ Our Black Metal bands from the early days seem to grasp this dynamic and run with it, unlike some of the newer extreme bands out there, who all seem like they are in a contest to see who can keep the pedal down the hardest. Juxtaposition works, and Kampfar uses it with blade-sharp precision.

The curve ball on the album comes in the form of “Dominans,” creeping like vines up the side of an old house. Featuring the disturbing vocal counterpoint of Agnete Kjølsrud, this one is most certainly a larger step outside the normal Kampfar milieu. Writhing with atmosphere in the form of a deep horn and madness-inducing laughter, it is a song whose composers are making no secret of the bad place out of which Ofidians Manifest has sprung.

The middle section of the album is where Kampfar displays the music that was waiting for them beneath the nightmare of their last few years. “Natt” seethes with Black Metal spite, clean vocal repetition overlaid upon the gratuitous yell of Dolk; one can just imagine him blowing down the walls of the unfortunate studio trying to hold in all that rage. Yet, Kampfar is Kampfar. The odd piano interlude ushers in a very temporary mood change. There is no falling asleep on this listen.

The sheer aroma of triumph and highly focused darkness continues on the masterful “Eremitt.” If the past few albums have managed to move Kampfar away from the Folk backdrop out of which they emerged, the middle section of “Eremitt” will serve as a reminder. There is a restless quality to the songwriting here, the playing of Ole Hartvigsen (guitars), Jon Bakker (bass), and Ask Ty Ulvhedin Bergli Arctader (drums) evoking a feeling of complete freedom, and reveling within same.

The mood of savage enjoyment continues on “Skamløs!” in the form of cold riff magic and a driving beat guaranteed to get the long-hairs whipping, and the pit churning. Dolk sounds like those points in any exorcism flick when the possessed child starts growling in tongues. Like their countrymen in Vreid, Kampfar never seem to forget that they are a Rock-n-Roll outfit despite all the extreme Metal trappings. As serious as these tunes are, they are never not fun.

Marianne Maria Moen represents the second guest singer Kampfar employ on the album. Closer “Det Sorte” returns us from the more straight-ahead gunnery of the center to the arms of the deep psychological thread running through Ofidians Manifest. Pulsing with menace, this song actually does rock out quite a bit. An anthem for where things stand in 2019, Kampfar again manifests its penchant for losing the listener in head-banging glory, then yanking out the rug for some minor key piano. Moen’s vocals and a pensive keyboard arrangement add a dreamy quality to the affair, yet never strip the song of its teeth.

Kampfar have been at it since 1994, resisting exhaustive touring and output in favor of an approach that more bands should take. Never ones to follow any path but their own, fans old and new can rest assured that Kampfar have realigned themselves for the best, as this new album will surely encrust another jewel in the crown of their sterling career. Cryptic Rock gives Ofidians Manifest 5 out of 5 stars. 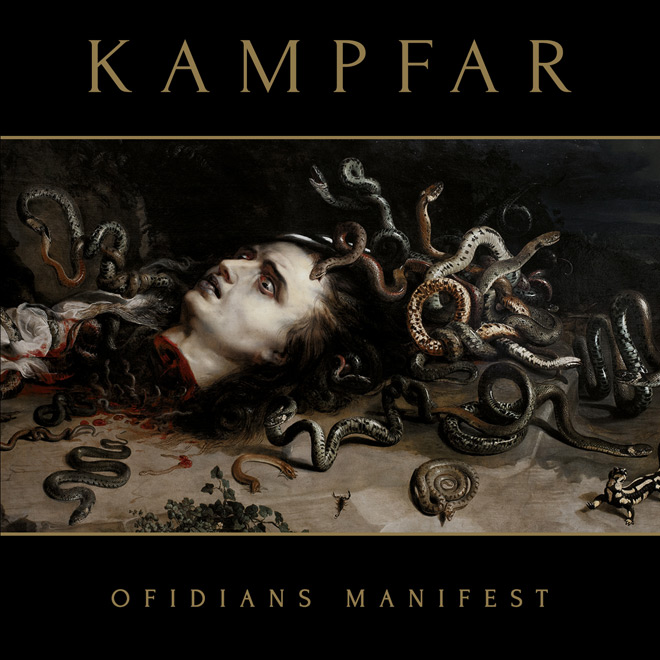