For those who love watching movies with long scenes of someone walking in slow-motion during a quick, one-two punch minute of character development…and for those who love heroes in movies that hardly speak a word but rudely ask for help while also antagonizing a fight that surely could have been avoided…and for those who love a good short and sweet film filled with likeable characters, gory fight scenes, and sound effects purposely louder than the actual dialogue, look no further, because the movie Karate Kill is exactly what the doctor ordered. 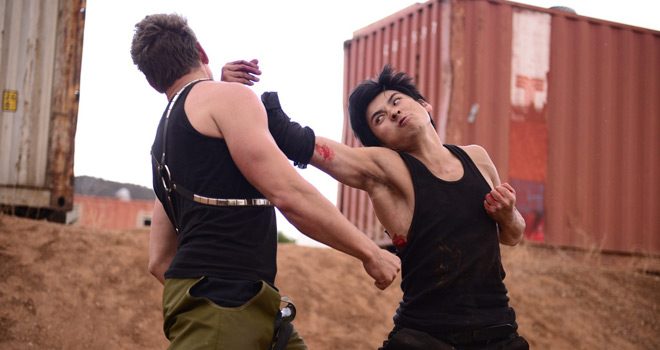 Hitting the streets July 18, 2017 from Petri Entertainment and distributor Dark Cuts comes Karate Kill, an in-your-face Action flick that has all the right stuff to be just another hokey Martial Arts movie, but not enough pokey to be considered a full-on Grindhouse effort.

Beneath its faux-exploitive façade is an Action film packed with a whole lot of genuineness, conviction, and determination from its cast and crew. Karate Kill is also on a mission to pay a deep respect to the older style Grindhouse/Chop-Socky/Arthouse cinema, succeeding only with a nod. If that all makes the movie sound at all bad, be rest-assured that it is meant only to convey how Karate Kill accidentally came into its own from trying to be something it is not.

The story of Karate Kill is quite simple: Kenji (Hayate, in what seems to be his first starring role) is a master martial artist who has to quit four part-time jobs so he can go in search for his sister Mayumi (Mana Sakura: Danger Dolls 2014), whom he suspects is missing. Kenji flies from Japan to LA, making one last stop in Hoover, Texas, where he chases down a ruthless cult-gang called Capital Messiah which has taken Mayumi hostage.

Leading this gang is Vendeski (Kirk Geiger: Sorbid Lives 2000): a vicious son-of-a-gun who runs a website that has a catalogue full of violent snuff films at the ready for streaming. Kenji soon finds an ally in a Capital Messiah-escapee whose name is Keiko (Asami Sugiura: The Machine Girl 2008, Gun Woman 2014), who not only has a hook-thing for a hand, but has also been plotting her revenge against Capital Messiah. Together, Kenji and Keiko journey forth to save Mayumi from the evil clutches of Capital Messiah, and exact a force of wrath upon the gang before it is too late.

There is plenty of blood, guts, guns, and karate hitting almost every scene of this little charmer of a movie, and plenty of female nudity, to boot, with one bonus scene of male nudity, in the form of “plumber’s butt” (or man-cleavage, nowadays) to whet the appetite of any person into this type of stuff. 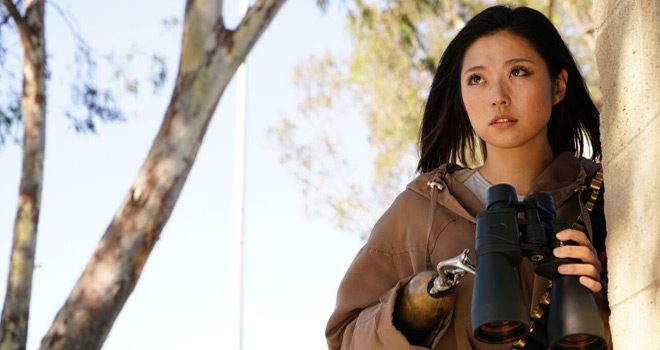 What stands out the most in this film is the choreography of the fight scenes. Hayate, being a 20-year trained Martial Artist, is an absolute sight to see on the big screen. He appears to float on camera as he fights off bad guys and bad gals, making every little move look effortless. He also handled his own stunts, and even throws in a few Parkour moves every so often. Hayate also does a nice job bringing believable emotion to his character.

On board for the ride is Keiya Tabuchi, the choreographer who helped perfectly strategize Hayate’s fighting style in the movie, doing this in a way that makes the fight scenes appear all so very real. The stunt-work is breathtaking, too, and well-executed by a team of six stunt-people, who all seem as good an actor as they are at taking punches and falling down from tall buildings. Look fast for a few stunt blunders left in the film, including one that involves a staircase and a loud “bang.”

There are a lot of great actors to be found in this movie, and far too many to mention. Who steals the show, however, is Geiger. If an award were to be handed out this year for Best Actor, Geiger deserves to win. His portrayal of Vendeski is flat-out superb, and quite an eye-opener. He brings such life into his sinister, crazed-out cult-leader character, flawlessly tackling this task. His facial expressions and line-delivery are spot-on. Geiger’s Vendeski will scare and creep-out any unsuspecting viewer, and even cause a few chuckles along the way.

The product of Writer/Director Kurando Mitsutake (Samurai Avenger 2008, Gun Woman 2014), he tried so hard to make a movie appear low-budget and hokey that was supposed to give off an old-school look and feel to its tone, but made a movie look professional, polished, and very expensive, instead, leaving no room for pokey. This, of course, is in no way a bad thing because Mitsutake unwittingly kept his movie from becoming yet another wannabe Grindhouse entry. However, in one silly attempt to attain Grindhouse status, a scene of bigotry arises, for some strange reason that, does NOT belong in the movie, whatsoever, and its delivery seems a bit contrived. 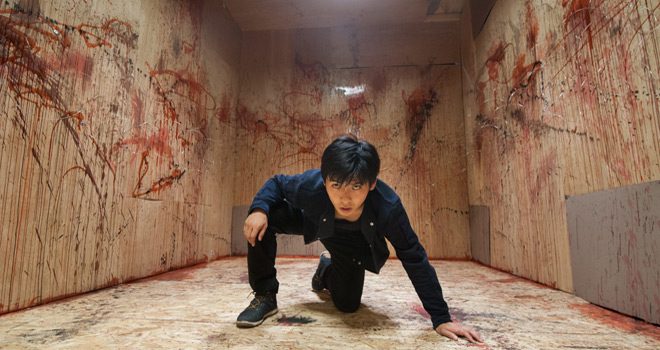 The score of this movie is a lot fun, too, which borders old Nintendo-game music and instrumental versions of a Rocky movie soundtrack – well, Rocky IV, to be more precise – giving Karate Kill a steady rhythmic heartbeat throughout its duration. This is thanks to Composer Dean Harada, whose score for Gun Woman is the reason Mitsutake chose him for the job on Karate Kill.

Bordering Grindhouse/Exploitation territory from afar, Karate Kill will satisfy an audience eager to see a cheesy Martial Arts film, but will soon realize the movie is more Cheddar than it is Cheese. Kurando Mitsutake’s Karate Kill packs a lunch full of punches, and a whole bag of kicks. Kudos to another great film from a visionary and imaginative director. For those who love movie reviews with ratings at the end, CrypticRock gives Karate Kill 3 out of 5 stars. 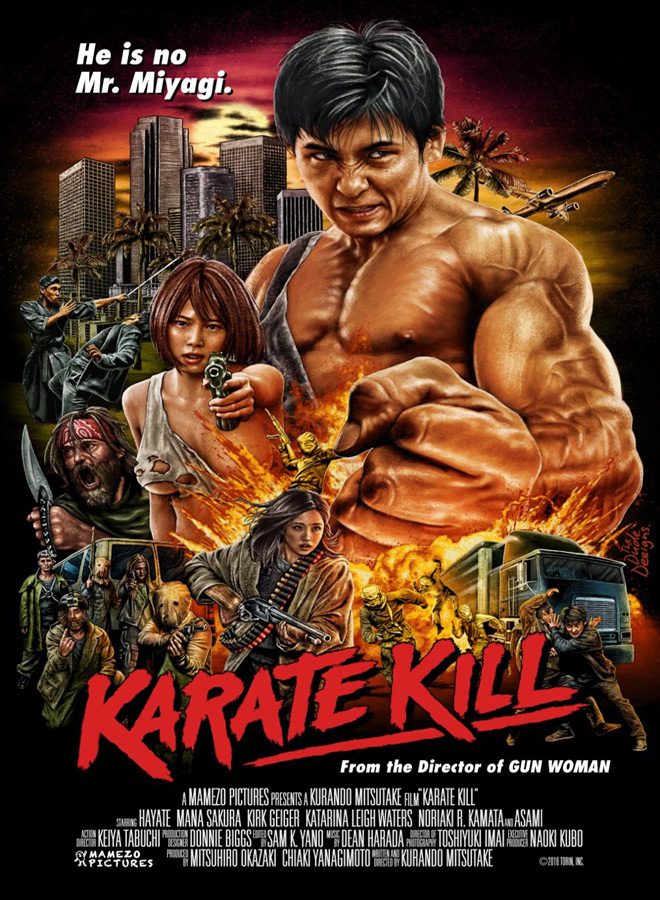