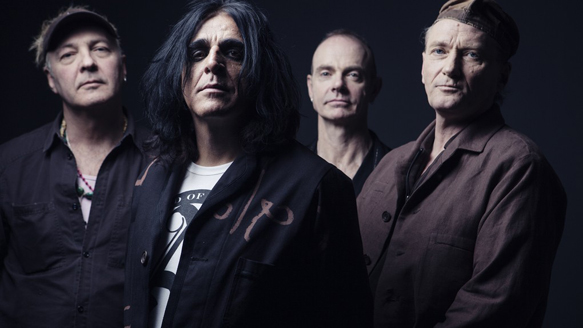 The turn of the millennium is now just over fifteen years old. Music has developed, changed, morphed, and in true cyclical fashion, has come full circle in a lot of areas. From Accept to Slayer, and from Bad Religion to Godflesh, the old guard has ridden all of the waves, and it is encouraging to see how many bands from the 1970’s and early 80’s not only remained relevant, but dug themselves out of whatever career calamities they might have endured to come out shining on the other side. For Killing Joke, whose pioneering Post-Punk, Industrial madness erupted out of Thatcher-era London to take the underground by storm, this retaking of the throne, as it were, has been exemplified with masterful confidence. On October 23rd, 2015, Killing Joke will release their fifteenth studio album via Spinefarm Records. Entitled Pylon, the new album features the same stable lineup of Jaz Coleman on vocals, Geordie Walker on guitar, Youth on bass guitar, and Paul Ferguson on drums. Reza Udhin once again handles the keyboards, and from the start, it is clear how much inspiration and genre-splicing creativity exists in the minds of these men.

Since their reformation in 2002 after a lengthy hiatus, Killing Joke has been getting better and better with each release. Pylon culminates a trilogy of albums that began in 2010 with Absolute Dissent, and continued with MMXII in 2012. Each of these albums featured a mixture of genre defying excellence that Killing Joke has shown uncanny mastery over. Pylon shows them as pissed off, suspicious, and sneeringly aggravated as they have ever been. Early singles “I Am The Virus” and “Euphoria,” by themselves, show utter dominance in the making. The former song is an industrial storm of Punk meets Disco rhythms, showcasing a band whose members are in complete sync with one another. Plowing forth against the grain, their fury at the drowning of the lower classes by elitist rule is articulated with no mercy. The latter song is a dance-floor anthem of fluidity and grace, like a Xanax for the ears. Instead of putting the listener to sleep, the song will awaken and stimulate the mind, expanding forth into a universe of back-lit city streets, where rebellion is slowly waking up in the hearts of those who dwell within.

To open the album, “Autonomous Zone” begins with Industrial coldness. A quick bass guitar phrase that sounds just a tad like a Seinfeld interlude launches the prototypical Killing Joke, Post-Punk, dance hall pacing. The repetitive bass lines and sampled alarm notes ratchet up the ominous mood of the piece. This is music to slam to, to dance to, or to nod along thoughtfully to, where the listener will begin to see the lies being sold to us by grinning corporate monsters and political despots the world over.

While it is common for albums to grab listeners’ hearts with two or three classics-in-the-making, Pylon manages this herculean task again and again. “Delete” builds tension with some great riffing, but when the rhythm section comes in, it ignites the song with a beat as insistent as a strobe light pulsing an impending meltdown, deep in the heart of a nuclear reactor. Coleman sings beautifully over the menacing beat, his voice soaring and uplifting despite the heavy tones underneath. “Big Buzz” harks back to their New-Wave period of the 1980’s, with velvet vocal lines and an engulfing, yet inviting keyboard layer to Ferguson’s on-point drumming. In songs like this one and album closer “Into The Unknown,” one can imagine that Fear Factory and Killing Joke have perhaps taken some influence from one another. There are similarities between Burton C. Bell and Jaz Coleman and the way in which their voices overtake and make sublime the meanderings of their respective songs.

“New Cold War” features a wonderful guitar-based intro, moving with finesse around the Industrial pace laid down by the rhythm section. Coleman’s diatribe comes clean and echoing, with only a tiny amount of gravel getting into his clear bellow. “War On Freedom” is a Post-Punk anthem of slightly slower pace, with catchy vocal hooks that will stay in listener’s heads for ages. There is no surprise that the term war shows up in these song titles. Killing Joke, as individuals, have seen the descent of the West into a state of endless war. In their accumulated wisdom, they know that the true war lies not in some foreign city or battlefield, but in each of us as we deal with our dwindling freedoms and loss of control to corporate interests, computer magnates, and politicians who promise us trivialities while selling the common man to the highest bidder. The ability of Killing Joke to turn this sentiment into unforgettable anthems has perhaps never been more focused. Allow the anger and percussive angst of “Dawn Of The Hive” to envelop one’s senses, then transfer that to the slow yet explosive metier of “New Jerusalem.” This one’s manic drum performance by Ferguson is perfectly weighted beneath Coleman’s apocalyptic howl. The percussion resounds in tribal triumph at times, juxtaposed against subtle and well-placed industrial sampling in other places.

With Pylon, Killing Joke are putting the crowning jewels on a career that began in 1978 and has been charming, confounding, and laying waste to critics and contemporaries alike. Influencing acts from Metallica, to Soundgarden, to Nine Inch Nails, Killing Joke seem to only be getting better as they march onward. CrypticRock gives Pylon 5 out of 5 stars. 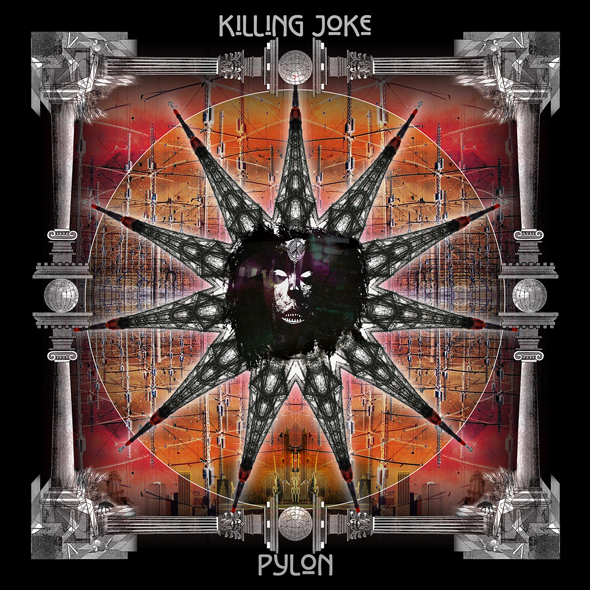