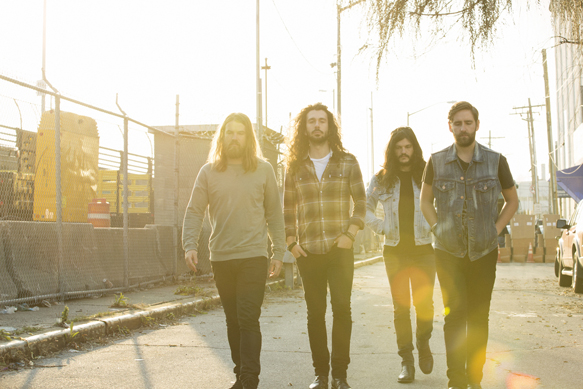 Hailing from Melbourne, Australia, Alternative Rock outfit Kingswood have been building a name for themselves over the course of the last decade.   After playing gigs around Australia, several national festivals, and supporting mega acts like Grinspoon, The Living End, and the mighty U.S. hard rockers, Aerosmith, Kingswood received critical acclaim after releasing their single “Ohio” from their 2013 Deluxe EP Change Of Heart. Lead by Fergus Linacre (vocals), Jeremy “Mango” Hunter (bass/vocals), Justin Debincrat (drums/vocals), and Alex Laksa (guitar/vocals), the band finally released their full-length debut titled Microscopic Wars in 2014 via Dew Process Label. Recorded at Blackbird Studios in Nashville, Tennessee and produced by Grammy Award winning producer/engineer Vance Powell, (The Raconteurs, Jack White),  Microscopic Wars was recently nominated against music heavy weights Jimmy Barnes, Angus & Julia Stone, Ball Park Music, and Dan Sultan for Best Rock Album at the Australian Aria Awards. With that said, this release has been long awaited by fans of the quartet.

Opening with “All Too Much,” the album starts off with a bang and immediately grabs the attention of the listener. The thumping snare by Debincrat and crunching guitars of Laksa make this track chug along like a steam train until it reaches its station and then slows down for a Prog-Rock style chorus before revving back up for the verse. Next is the the first single titled “Sucker Punch,” an up-tempo song that has the rhythm section taking the lead with a gutsy, wandering bass groove and harmonious vocal melodies where Linacre asks, “Tell me what you’d do for love, show me what you’d do, my love.” Then it is into “ICFTYDLM (I Can Feel You That You Don’t Love Me),” which features a mellow, bluesy bass guitar rhythm and some spooky 1970s synth that listeners could easily find themselves humming along with. Here an ultra clean lead guitar solo carries the vocals over into an expert synth solo. The second single, “Micro Wars,” picks up the driving beat again with Laksa showing his chops. The textures of the guitar have a John Frusciante feel, and the song is accompanied by a ten minute mini video clip that is well-worth seeing. The lyrics, which are romantic and sad, are complemented by the aching melody line and Linacre’s timbre.

The song “So Long” follows with a late-night Jazz club ambiance. Here Linacre’s voices shines brightly as he croons the melody line vividly before Laksa breaks into a swift guitar solo. Next is “Ohio,” from the Change Of Heart EP, which features a rhythm-blues-rock vibe. “Ohio” begins with a quietly sung verse before the guitar fuzz takes over the chorus and the vocals become a scream, the song ending in a frenetic cacophony. Like a classic Rock record of yesteryear, “Hours” provides a short guitar and vocal a-capella interlude, breaking up the songs nicely before reconvening with “Side to Side.” This piece bangs and crashes, driving hard with bass notes guiding it to its crescendo. In “Tremor,” Linacre’s falsetto is a bold highlight, and he sounds reminiscent of a strong power ballad vocalist. Full of heart and melancholy, the listener is then swept forward into “Eye Of The Storm” which opens with lush piano and emotional vocals. This romantic Rock ballad takes the audience away on a sweet journey where Linacre’s voice strongly resembles the style of Maroon 5’s Adam Levine. On “She’s My Baby,” the band brings back the sound of Led Zeppelin and Wolfmother with feedback, Blues-rock guitar, an energetic tempo, high tenor vocals, and lyrical syntax. The formula is tried and true and works to perfection. “Piece By Piece” is performed in a minor key that has a Middle Eastern influenced melody vaguely familiar to Canadian Rock band The Tea Party. Tugging at the ears of the audience, the lyrical story of heartbreak continues in the most beautiful fashion on this piece. Then Microscopic Wars wraps up with “Chronos” which features a grinding sludge rock vibe with a lot of distorted guitar and grunge-like bass.

Microscopic Wars is an album to drive to or put on late at night to kick back and chill out with. It is full of warm bass riffs, strong drum beats, beautiful guitar licks, and stunning falsetto vocal harmonies. It is proof that the long wait for Kingswood’s debut was well worth it, and fans of unfiltered Rock-n-Roll should check it out.  CrypticRock gives Microscopic Wars 5 out of 5 stars. 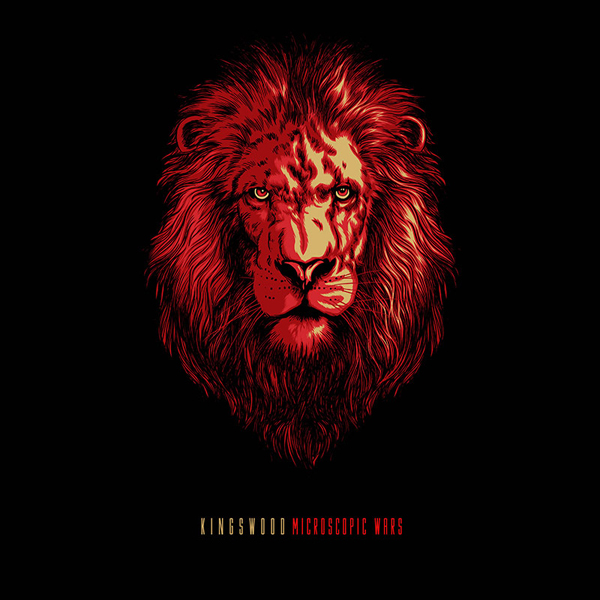