In 1975, KISS’ double live album Alive! propelled the band into international stardom. Having released three moderately successful studio albums prior to Alive!, the band was on the verge of packing it in. First, 1974 saw the release of two long players, their self-titled debut and Hotter Than Hell. Then there was 1975’s Dressed to Kill, which featured the band’s most popular song, “Rock and Roll All Nite,” but despite being a powerhouse live act, and one of America’s top draws, record sales paled in comparison. Thus, after the release Alive! in October of 1975, less than six months later, under much pressure from their label, KISS would record their most experimental, and revered studio album, Destroyer. Released on March 15, 1976, forty years later the album is considered a Rock-n-Roll classic.

Known for their wild theatrics and iconic makeup, the band formed in New York City in 1973. After Wicked Lester broke up, founding members Gene Simmons (bass/vocals) and Paul Stanley (vocals/rhythm guitar) recruited Peter Criss (drums/vocals) and Ace Frehley (lead guitar/vocals) and formed KISS. Adopting the look, attitude, and feel of Alice Cooper, the New York Dolls, and Glam-Rock acts, but with more punch, their live shows became the stuff of legend. World class pyrotechnics and Gene Simmons spitting blood and fire were par for the course.

Using the studio to their advantage, the band took their straight-forward Hard Rock /Pop sound to another level incorporating sound effects, a children’s choir, orchestration, speaking parts, a mysterious hidden track, and even laid down an all-time piano ballad with “Beth.” In addition, Destroyer would also mark the first time the band was depicted on the cover in the form of a drawing and not their real selves. This was the beginning of what would become one of the ’70s most successful marketing campaigns, in any industry, as the band’s likeness was plastered on everything from lunch boxes to Comic Books. Their next two albums, 1976’s Rock and Roll Over and 1977’s Love Gun, would also have the band in art from on the cover. Thus, Love Gun would mark the end of the band’s “classic” era as the next album in their canon, 1979’s Dynasty, saw them release “I Was Made for Loving You,” a virtual Disco number. Lineup changes and poor, for KISS, album sales would follow as the band became a caricature of themselves for the next few years.

As for Destroyer, the album begins with an eerie newscast telling the tale of a young man who was killed in a car accident in Detroit. As the reporter’s voice fades out, the sounds of jingling keys opening a car door come to the fore, and the listener then hears “Rock and Roll All Nite” from Alive! blaring on the car radio. The sound of the car’s motor then takes over before giving way to a propulsive riff from Frehley, starting off Destroyer with the anthemic “Detroit Rock City.” A catchy chorus of, “Get down/everybody’s gonna move their feet/Get down/everybody’s gonna leave their seat” was the centerpiece of the song. Throughout, Frehley pounds out chunky riffs while Stanley tells the tale, in the first person, of the Michigan youth who was killed in the car accident reported at the beginning of the song. The opener blends right into the next track, “King of the Night Time World.” An upbeat lead on guitar, coupled with massive amounts of cymbal crashes and a military shuffle from Criss on drums, which he uses throughout the song, kick off the number. About teen angst, Stanley sings about stealing away his girlfriend, from her parents, who do not approve of their love affair. Frehley takes center stage in the middle portion with blistering, escalating, melodic solos.

Then there is the song “God of Thunder,” which finds the band stepping away from the formula with a creepy spoken word intro by what sounds like toddlers. A plodding bass line and doomy guitars drone on as the kids can be heard screaming in distress, along with echo-like effects in the background. A break in the middle is rife with strange noises, more eerie, inaudible screams from the children before one more chorus, and a spooky outro. Doing a complete 180, the next track, “Great Expectations,” is a delightful Pop number with enough double entendres to fill an arena. A light airy melody, coupled with backing vocals from the Brooklyn Boys Choir, made for a strange number coming from KISS, but it worked perfectly on this album as it encapsulated the spirit of adventure fostered by producer Bob Ezrin.

Another call to arms for disenfranchised teenagers comes with“Flaming Youth,” which begins with screaming guitars and quickly falls into a slice of Pop perfection. An extended solo from Frehley over a jangly rhythm from Stanley dominates the middle portion of the song before the chorus is repeated several times before falling back into a guitar heavy outro. Clocking in at three minutes, it is a choice slab of Rock and Roll. “Sweet Pain” follows and brings with it a simple, almost Country-inflected melody on lead guitar. Simmons takes lead vocals here, and is backed by uncredited female vocalists who deliver a knockout performance.

The lead single of the album, “Shout It Out Loud,” does not come until track seven and it is an anthemic fist-pumper in the spirit of aforementioned “Rock and Roll All Nite.” Clocking in at under three minutes, a simple melody on guitar with a sycophantic bass line, propulsive drums, and call and response vocals from both Stanley and Simmons, the song was another call to the fans young base to rebel against their parents and have a party. The band’s highest-charting single, “Beth,” which reached number seven on the Billboard Hot 100, and would be one of only two gold singles (the other was 1979’s “I Was Made for Loving You”) came directly after on Destroyer. Featuring classic piano balladry and strings from the New York Philharmonic, the gentle tune told the tale of a guy in a band pleading for patience from his lover while he and his bandmates are recording. This was a stark departure from the band’s signature sound and caused a riff between Stanley, Simmons, and Criss, as Stanley and Simmons did not want to record the song for the album. It turned out to be a great move as the song shot up the charts and helped the album reach number 11 on the charts in the United States, and go on to sell over two million copies.

Finally, album closer, “Do You Love Me” was atypical KISS, a straightforward Rock and Roll number about life on the road and groupies. A classic ’60s girl-group drumbeat interjected with short bursts on guitar set the stage for a powerhouse from Stanley. Following “Do You Love Me” was a hidden track, often called “Rock and Roll Party,” that featured strange noises and muffled conversations. It was a fitting end to Destroyer as the band continually stepped out of their comfort zone throughout.

Regarded by fans and critics alike as KISS’ finest hour in the studio, Destroyer is clearly the band’s magnum opus. Pulling out all the stops musically and creatively, KISS delivered an album that embodied their spirit of good-time Rock and Roll, and painted the basics with studio enhancements that never seemed forced, pretentious, and most importantly, out of place. Destroyer is simply a cohesive Rock and Roll record with just enough magic sprinkled in to put it on another level compared to the rest of KISS’ catalog, and similar acts of the era. 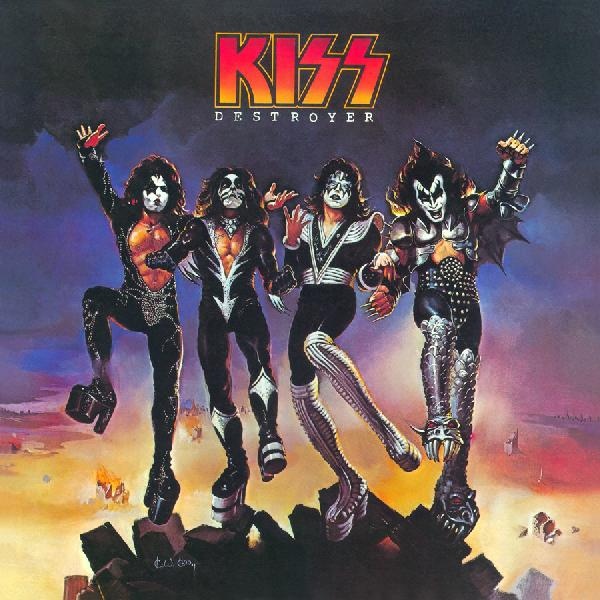