A typical New Wave music enthusiast will easily cite the likes of Morrissey, Howard Jones, Nik Kershaw, Gary Numan, Cyndi Lauper, and, of course, David Bowie when someone asks for examples of solo acts associated with the genre. While all these influential and prolific artists deserve the recognition often bestowed on them, there was someone significant and special tucked in the cryptic heart of the genre whom many are usually forgetting to add onto their lists: Klaus Nomi.

The eccentric and short-lived artist may have released only two albums in his lifetime, but his music, image, and style singularly gave New Wave music in the early ’80s another interesting sound and face. Instead of taking inspiration from the often-referenced Punk Rock of the late ’70s nor from the Psychedelic Folk Rock of the decade that preceded it, Nomi pulled his cue instead from ’60s Art Rock and ’70s Disco; married these with his love for Vaudeville, Classical Opera, Cinema, and Theater; and then glazed everything up with his fascination for the budding synthesizer-oriented Pop music of the time. What resulted was what may now be regarded as the ultimate New Wave hybrid and persona that became wholly his own, complete with customized plastic tuxedos, oversized bow ties, otherworldly wardrobe, and classic spaceman hairstyle.

Born on January 24, 1944, in Bavaria, Germany, Nomi started his performing career in 1972 at a theatrical production of Richard Wagner’s Das Rheingold in New York City, where he immigrated in the same year and lived to the end of his days. His unusual character and singing voice, which shone immediately during his performances in the years that followed, caught the attention of some of the movers and shakers of the city’s burgeoning New Wave scene, inspiring him to record music.

One significant entry in his résumé was his having served as one of Bowie’s backup singers for the late Starman’s TV appearance in an episode of Saturday Night Live in 1979. That single TV exposure alongside the star-dusty Ziggy, coupled with his own outworldly charisma, inevitably catapulted Nomi to sudden commercial popularity. However, his trajectory was cut short; his star did not get to illuminate its brightest; he died on August 6, 1983, due to complications secondary to AIDS. He was 39. Fortunately, he left a legacy of two full-lengths: 1981’s self-titled and the following year’s Simple Man, which turns thirty-five this year. Interestingly, the album title was a complete opposite of what Nomi was all about.

Released on November 23, 1982, Simple Man was a seemingly unlikely, yet certainly beautiful matrimony of Nomi’s Classical roots and engagement in the then flourishing New Wave art/theater scene in New York. It opened grandly with his chilling take on the Gothic Opera piece “From Beyond” by the English Renaissance Composer John Dowland, which served as a dramatic introduction to the next track: the electrifying, spacey, and quirky Rock Pop “After the Fall.” This was one of the many tailor-fit songs Musician Kristian Hoffman wrote for him – who himself was a luminary of New York’s so-called No Wave scene of the decade.

Next was a Disco-infused and Synthpop-inspired version of the ’60s R&B song “Just One Look.” Then there was the melodramatic, theatrical flair of the ’30s German Vaudeville ballad “Falling in Love Again,” which was popularized in that era by the German Actress/Singer Marlene Dietrich, and which Nomi was able to give justice to. In his version, Nomi’s effortlessly delivered operatic voice effectively soared above the Post-Punk-influenced, guitar-oriented instrumentation of the music.

The robotic rhythm and tripping of “ICUROK” was most likely an excursion into the rhythmic precision and deadpan predisposition of Synthpop music of the period, spearheaded by the genre’s pioneers like Kraftwerk (“Computer Love”), Yellow Magic Orchestra (“La femme Chinoise”), and The Normal (“Warm Leatherette”). The following “Rubberband Lazer” was a fascinating beast; it had echoes of Bowie’s own Vaudeville adventures during the beginning of his career (“Rubber Band”) and traces of Country-influenced guitar melodies, galloping beats, lyrical themes, and yodel-like vocal acrobatics.

The flipside of Simple Man started with a short teaser of Henry Purcell’s “Wayward Sisters,” another foray into Nomi’s beloved Classical preoccupation. Today, it can still fit onto a playlist that includes similarly-styled ritualistic songs such as “Rakim” by Dead Can Dance, “Corpus Inimici” by Nicholas Lens, and “Mea Culpa” by Enigma. The ensuing “Ding-Dong! The Witch Is Dead,” from the 1939 film The Wizard of Oz, returned the listener to the overall Electronic Dance vibe and theatrical theme of the album. “Three Wishes,” on the other hand, was much closer to the typical New Wave sound – slashing guitar lines, fast tempo, catchy melodies, and a frenetic delivery of rhythm – setting the perfect sonic ambience for the album’s title track, which remains one of Nomi’s commercially popular songs.

In hindsight, the penultimate and the final track, Purcell’s “Death” and Dowland’s “Return,” respectively – which Nomi rendered in the same, unaltered, nearly macabre… no, actually, ghastly and funereal manner – may be regarded chillingly as his double-edged “swan-sword,” a conscious premonition of his own untimely death. “Remember me, remember me…,” sang Nomi repeatedly, until he slowly stepped back into the virtual, aural stage, ultimately fading away behind the choir of weeping angels and demons who were seemingly mourning his ticking demise, predating Bowie’s celebration of his own impending departure in 2016 with his final opus, Blackstar. Perhaps, Nomi had long been waiting for this moment in the proverbial Pop Rock heavens, but this time no longer only a sidekick, to perform the first and final duet with the equally insane Aladdin, something that he must have been waiting for since that 1979 stint but had failed to realize in his lifetime.

Considering his unique personality, the unusual mix of musical styles, as well as his intense passion and dedication for perhaps everything that he did in his entire career, Nomi’s name deserves to be up there in the pantheon of icons of not only what is now recognized as the genre New Wave but also the entire history of popular music. Now, after paying remembrance to Simple Man, give the not-so-simple artist another homage by checking out his self-titled album, to further understand the man and his music. 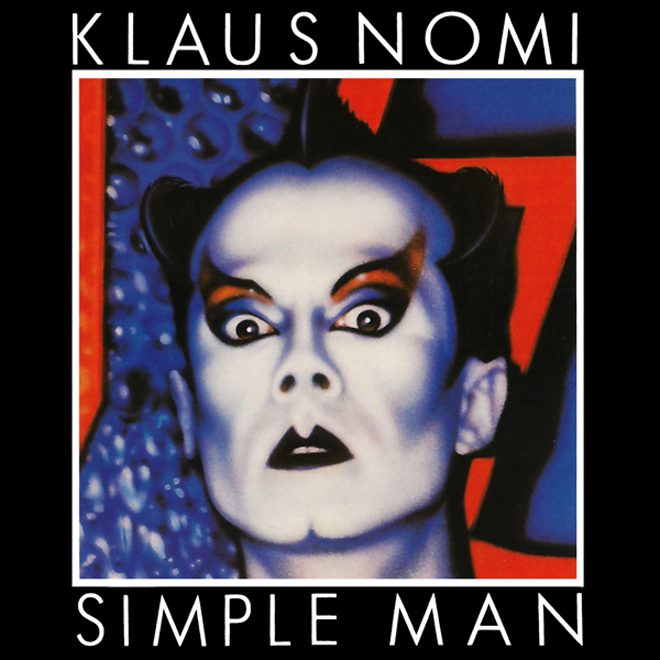