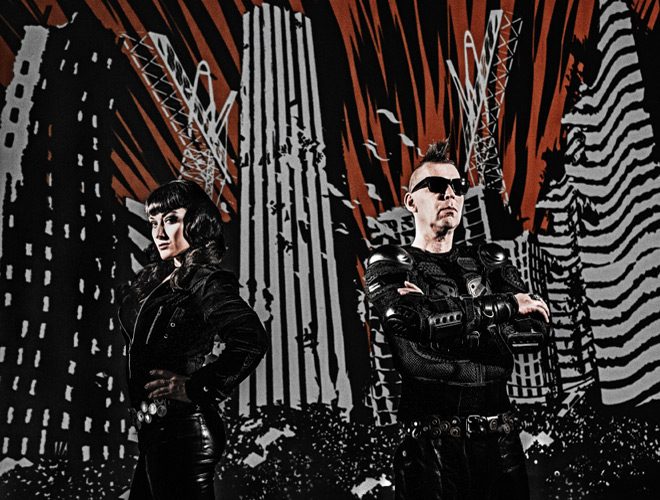 “Better than the best, and harder than the rest” is not just a lyric, it has been the very mantra that KMFDM have fought, strived, and bled for the last thirty-three years. When one thinks of the very foundations of Industrial, one would be gravely mistaken to not include the creators of the “Ultra Heavy Beat” within their top 5.

Since the release of their 1986 album What Do You Know, Deutschland?, KMFDM have been challenging their fans to question their surroundings, stand for what they believe in, and not to be afraid to throw up one’s middle finger to the powers that be. They were, in many ways, the living embodiment of everything the legendary label Wax Trax! stood for – unconventional, uncompromising, and unmatched; traits that many would say is greatly lacking in modern Industrial music. Their influence is as variant as their sound through the years, countless Metal acts such as Static-X and Prong have credited albums such as 1993’s bone-crushing Angst for changing their creative lives.

Moreover, on the other hand, their more electronic ventures such as tracks like “Anarchy,” from 1997’s iconic Symbols album, had dance floor DJs and artists use it as a backbone for future dance tracks. Not only has KMFDM been a vehicle for influence through the years, they have also been the stage that helped bring out a plethora of new talent that have been instrumental in music’s growth and change. Raymond Watts (also of PIG) Tim Skold (Skold and formerly Marilyn Manson) are just a couple of names that have been perverting fans’ minds and hearts with revolutionary sounds for some time, yet were helped made into household names by joining forces with the beloved Sascha Konietzko.

Granted the band has been riling up countless audiences throughout their career, but to bolster their arsenal, they have up until July 28th, 2017 released 19 albums. On July 28th however, the once artistic experiment of Kapt’n K will be delivering their twentieth studio album, ironically the title will suit any loyal fan’s natural reaction, Hell Yeah!

Not many artists can offer sure fire guarantees with their releases. Some, however, flourish in those trademarks, KMFDM have generally never pulled any punches with the kick off track on their albums, the title-track start to Hell Yeah is no exception. Engulfing the listener in classic KMFDM shredding guitars and jarring programming offer pure energy for the mind to digest. As mentioned before, a staple to KMFDM’s message is empowerment, it is as essential to their message as air is to stay alive, which is on full display with the follow-up track “Freak Flag.” Vocalist Lucia Cifarelli remains one of the industry’s most charismatic singers, as her persona comes alive in her phrasings reaching out and speaking directly to the listener insisting on letting their proverbial “freak flag” fly and be themselves.

A KMFDM album without a raised voice against the government state systems and forces that are out to control the populace would be like releasing a Horror movie with nothing but unicorns and puppies. In a time of political strife and moral injustices at an alarming high, the world desperately needs KMFDM’s Hell Yeah message of revolution now more than ever. That said, songs such as “Fake News,” “Total State Machine,” and even the brief intro “Oppression 1 of 2” offer resistance to the powers that be while encouraging to be the very vehicle for change. The overall sound for the album is a little more electronic than the most recent few releases, but offers some unexpected twists.

Furthermore, the entrancing fast-paced rhythm of the track “Murder My Heart” is only made more perfect by the curveball organ solo that infuses an almost carefree feel to the song that only KMFDM can do. Coupled with Cifarelli’s forceful yet almost seductive vocals, this track will be a favorite for this crushing release. The album also features some guest appearances that one should not miss as Sin Quirin of Ministry offers searing guitar work on “Glam Glitz Guts & Gore” and none other than the legendary master of bass Doug Wimbish from Living Colour gives a layer of funk to “Rx 4 the Damned.”

While it may not be unheard of for a long standing influential band to release numerous studio efforts, to remain true to the sound they have forged while continuing to evolve is no easy feat. KMFDM has all but made it seem easy; one only has to look at the numerous artists who have failed to see how KMFDM stand above the rest. Granted Sascha and company have more than enough room to flip the script on his fans through the years and skip away from the sound which has defined his once art experiment/Frankenstein. Instead he has stayed true to his fans’ expectations and saved his vastly different compositions for side projects such as KGC, Excessive Force, and OK-ZTEIN-OK. As KMFDM prepares for a full scale tour in support of Hell Yeah, audiences will have a chance to experience one of KMFDM’s most unique album to date and soak in every lyric to memory.

The different textures and layers to Hell Yeah alone make this a must have, but the overall marriage of programming and organic sounds yet again prove that no one does it better than the juggernaut all have come to love as KMFDM. CrypticRock is proud to give this mile marking album a 4.5 out of 5 stars. 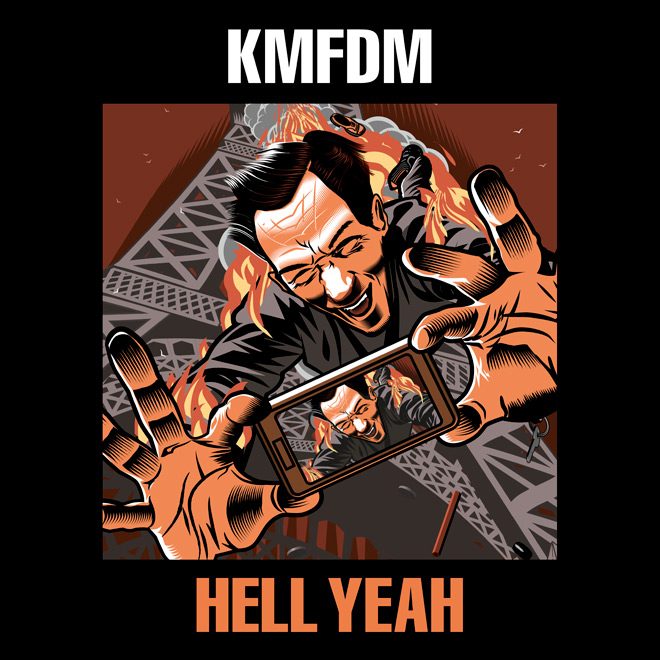