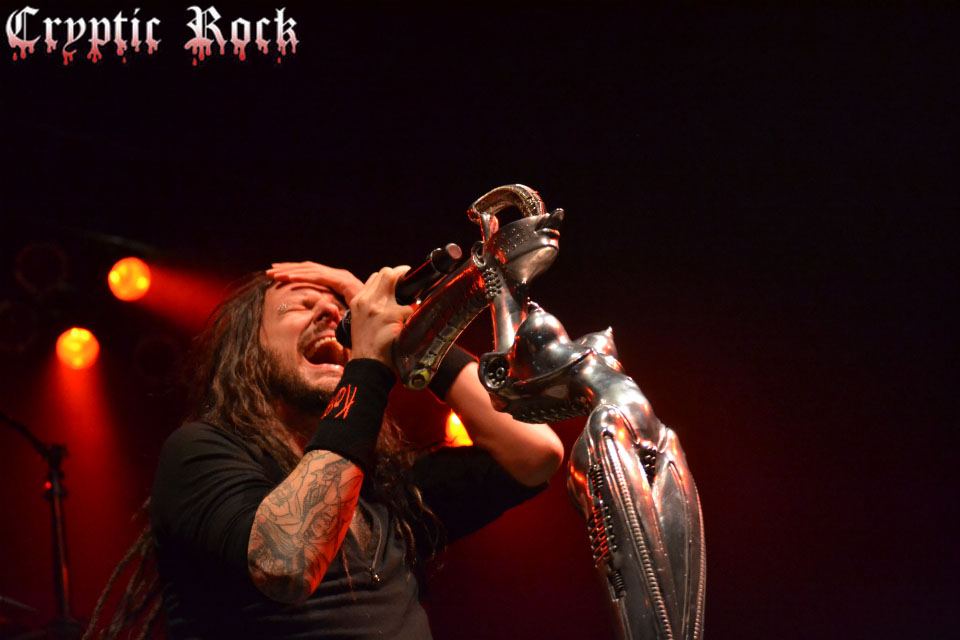 Rock and roll is the only phenomenon that allows you to simply let go of everything in your life going wrong and just have your emotions soar to a different world. If you needed such a relief the Roseland Ballroom in New York City was the place to be Friday September 27th.  Love and Death, Asking Alexandria, and Korn have come together for a short US tour to tear roofs off the venues they show up at, believe me when I tell you that the Roseland was burned to the ground for sure.  For metal and nu-metal fans there was no better place to be. The quickly rising metalcore/metal band hailing from the UK, Asking Alexandria, plays each show as if they are on a mission to take over the world and keep their genre alive. They’re supporting their newly released 3rd studio album, From Death to Destiny, which dominated the iTunes charts the moment it was released midnight on August 6th. Asking Alexandria has come such a long way since their debut album Stand up and Scream (2009). They now have headlined countless of their own tours around the world and now touring with the kings of nu-metal Korn is an achievement not many can brag about. Korn is headlining this reckless head banging tour and promoting their new album The Paradigm Shift due out October 4th. Since there debut studio album Korn (1994) they’ve put together a massive loyal fan base of millions that any band would keel over and die for. Korn paved the way for bands like Linkin Park to bring a new style of music to the industry that many people including myself still are craving to hear more of. We don’t want this genre to evaporate and die out to the likes of mainstream artists. Worry not though because I have a feeling Korn will put out music until they physically cannot continue or the apocalypse is brought upon us!

So back to the show! Korn guitarist Brian aka “Head” Welch has had a solo side project band since 2012 called Love and Death which he miraculously does lead vocals for.  Their debut album Between Here & Lost was released in January and the album hits hard. Head had his band tag along for this tour and they did not disappoint! Usually the first opening band of a show is just to get the crowd going a bit but Head was screaming for circle pits right off the bat!  One thing is certain Love and Death possess a raw energy which will grab many’s attention.

With the blood of the crowd boiling the lights go out and Asking Alexandria one by one walks onto the stage with the worldwide rockstar swagger they’re starting to deserve. They opened with a song from their newest album called “Don’t Pray for Me” and it had my heart pounding within seconds and they had me locked in a trance with them throughout their whole set. And not to mention lead singer Danny Worsnop had the crowd hysterically laughing at multiple points in between and even during songs! Ranging from “I just saw a boob!” in the middle of a song to “I’ll see you all after the show jack and cokes on you!” But understand me when I say that intensity from the crowd fuels this band. They stood on stage for about five minutes before the performed the song “To the Stage” trying to open up the crowd to have a wall of death and get a huge circle pit going. Following with the demand from Danny, “I want to see some violence!” Sadly Asking Alexandria can’t rock the stage for ever, and if you thought they burned the place to the ground a volcano was just waiting to erupt with Korn.

The Korn Kage is set up, the the mic stand known as “The Bitch” is brought out, and all hell is ready to break loose. The legend of nu-metal Jonathan Davis himself walks out and goes insane within seconds, “ARE YOU READY!” and the song “Blind” begins. Korn is about to relentlessly melt the crowds faces, dread locks swinging, rock stomping and heads banging. By the end of the set if your neck and head aren’t in agony of joy you didn’t rock out right. When Davis is up there stomping as he goes off performing “Twist” you just want to let everything inside you go crazy. The way Korn performs just encourages every part of your inner and outer being to live in the moment you’re in and lose your mind.

Rock and roll is an outlet to simply enjoy the moment you’re in currently and let go of everything. Asking Alexandria came from England and will not stop until they have rocked every corner of this world and the next.  Korn is a band that needs to be on every rock fans bucket list to head out to one of their shows. If you weren’t a fan of them before you will be turned into one probably about 5 minutes into the concert. There’s a few more dates for this US tour to see them so I would do whatever you possibly have to do to find a ticket and go! You will not regret this once in a life time rock experience! Korn will turn all you ‘Narcissistic Cannibals’ into life long followers!
Written by Austin Sausele

Asking Alexandria – See What’s On The Inside (Album Review) Witch Cross – Angel of Death (Album Review)
Like the in-depth, diverse coverage of Cryptic Rock? Help us in support to keep the magazine going strong for years to come with a small donation.